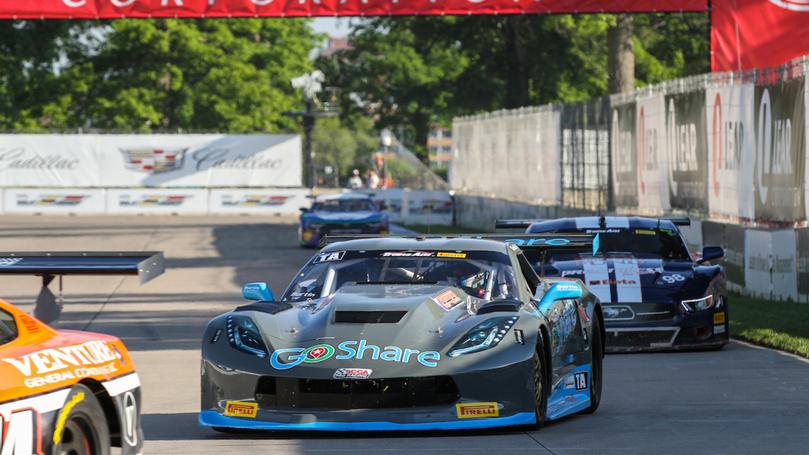 Burtin Racing is one of the top road racing contenders in North America. In the 2014 Trans Am season, Burtin Racing owner and driver Claudio Burtin campaigned the No. 7 ?GoShare ?Corvette C7.R to an impressive debut at Daytona International Speedway. Burtin achieved a fourth place finish, putting him in the coveted Top-5 in the first maiden outing. Trans Am has surged in recent years, setting record entry car counts, and is one of the most competitive formulas in American Motorsport with a substantial following nationwide.

The No. 7 Corvette C7.R is an ultra high performance race car, the naturally aspirated small block Chevrolet produces up to 900hp. The C7.R is modified to have increased cooling and aerodynamic downforce, including similar front splitters, rocker panels, and front-and-rear-brake cooling ducts; the suspension is modified to accommodate wider racing tires and larger brakes, air intake openings on each of the rear quarter panels above the brake ducts and a rear wing with larger radiator inlet.

At the end of the 2015 season Burtin Racing acquired a 25k square foot facility in Alpharetta, GA. This state of the art headquarters is home to a multifaceted team comprised with decades of motorsport expertise. The Burtin Racing shop capabilities provide full racing maintenance, preparations and repairs including full chassis fabrication. The race shop is equipped to service engine development with Superflow and performance analysis and a Mustang magnetic all-wheel dynamometer.

The Burtin Racing Trans Am program is being led by the experienced Gary Selix, a well respected engineer and crew chief with over thirty years of experience in Trans-Am, IndyCar, NASCAR and prototype cars.

Martin Ragginger supports the team with engineering and data analysis. Since 2007, Ragginger has been a star driver in the Porsche Carrera Cup in Germany, coming first in the UPS Porsche Junior Team 2010. Ragginger has won the Spa 24 Hours and the FIA GT2 European Championship. In 2015, he sits as a Porsche Factory test driver and competitor in the Carrera Cup Asia.

Team driver Claudio Burtin has found success at numerous sportscar-sanctioned events, a known competitor at the Rolex 24 Hours of Daytona and a history of racing sports cars and open wheel since he was young. A highly successful businessman and one of the most competitive drivers in the sport, Burtin is ready to return to a full season of racing in 2016 with the No. 7 Corvette C7.R in the Trans-Am series aiming for a top spot in the Championship.