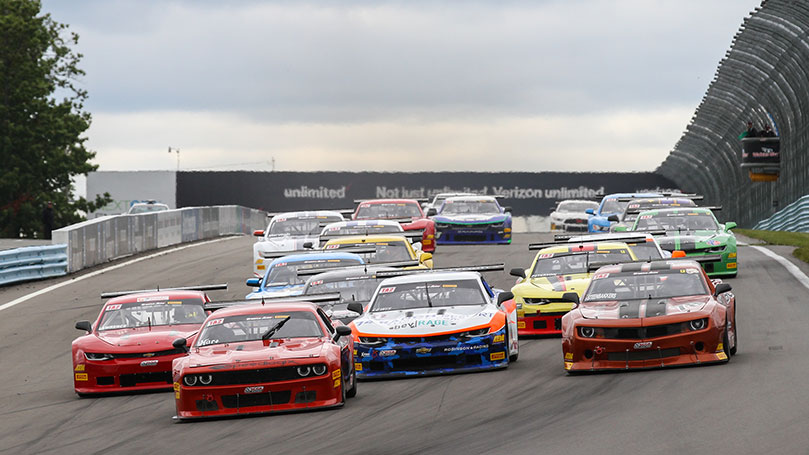 TA
CLASS
With over 800 horsepower, the sights and sounds of the Trans Am presented by Pirelli TA class resonate with much of the history of the pinnacle classes of North American motorsports, where power easily exceeded mechanical grip and aerodynamic downforce. These aggressive machines have a legacy that is decades in the making. With their remarkable speed, incredible sound, and the visceral challenges of pure racing thanks to electronic driver aids being banned, the fans love the cars of the TA class as much as its drivers do.
Read More »
TA2
CLASS
The TA2 class brings back the "Muscle Car Wars" of the 60's and 70's, when revered brands like the Chevrolet, Dodge and Ford released hot rod versions of their Camaro, Challenger and Mustang to try to prove who made the best performance cars on the American roads. The competition is incredibly close thanks to rules that keep an equal eye on the bottom line as well as the finish line.

Read More »
XGT
CLASS
FIA GT3 cars are some of the most technically interesting cars currently racing. But with a narrow window of eligibility, these remarkable machines haven’t had a good place to race-until now. The Trans AM Xtreme GT Class was created to give former GT3 cars a place to race. The class is open to a wide range of GT3 machines as well as custom packages from individual teams and race shops.
Read More »
SGT
CLASS
In its infancy, Trans Am was a production-based series that pitted makes and models from around the world against one another. That spirit, and the competition that comes from it, lives today in the Trans Am Super GT class. With some of the most liberal eligibility rules in North America, SGT welcomes a wide variety of makes and models -- promoting crossover from other professional series and club racing. From machinery constructed in a one-man shop to pro-built cars, there’s a place for it to compete and celebrate the variety of machinery and thrilling competition that road racing offers, while embracing the freedom to build your car your way.
Read More »
GT
CLASS
Originally, Trans Am stood as a production-based competition, bringing together the best offerings manufacturers could muster. Those early days of Trans Am competition that ultimately set the stage for all production-based racing that followed. Focused on limited-prep specifications, the Trans Am GT class is designed to bring competitive, cost-effective racing to Trans Am while allowing for crossover from the most popular club racing classes. GT stands as a proving ground for drivers looking for the challenge of a pro racing environment without the skyrocketing costs associated with other series.
Read More »
Pro/
Am
CHALLENGE
Partnering with SCCA, Trans Am launched the new crossover program the Trans Am Pro/Am Challenge in 2021, which will introduce SCCA drivers to the North American stage of Trans Am. The new Trans Am Pro/Am Cup Challenge will allow SCCA drivers to compete in Trans Am using the same basic 2021 SCCA road racing trim for their cars, making the transition back and forth between the SCCA Road Racing program and Trans Am seamless.
Read More »

Pirelli Tire North America and the Trans Am Series renewed their partnership until at least the end of 2024, with the Italian tire company as presenting partner for America’s Road Racing Series.

At the same time, Pirelli has also extended its agreement with SVRA – the Sportscar Vintage Racing Association – for the same period, as the ‘Official Street Tire of SVRA’. SVRA, the largest vintage racing organization in the United States open to virtually any vintage or historic race car, will share a number of key dates with the Trans Am Series as part of the ‘Speed Tour’.

The recent five-year extension between Pirelli and the Trans Am Series comes off the back of previous three-year agreement that ended in 2019. As a result, Pirelli will continue to be presenting sponsor as well as official tire supplier to one of the best-known road racing championships in the United States, which is rooted in popular culture as well as motorsport.

Ultra high performance – as well as competition – is at the very heart of Pirelli, which celebrates more than 110 years of motorsport and recently renewed its exclusive partnership with Formula 1. As well as supplying more than 220 car racing championships worldwide, Pirelli is one of the companies that invests most into research and development through motorsport, in order for the competition product to be as closely aligned to road car tires as possible.

Consequently, Pirelli and Trans Am are currently testing 18-inch tires for the headlining TA class, which could be adopted from next season already: bringing the tires used on the track even closer to those on the road. In a similar move, Pirelli is introducing 18-inch tires to F1 from 2021.

The series generally has four to six on-track sessions, including two test sessions (35 to 40 minutes in length) one to two practices (typically 30 minutes in length), one qualifying session (sixty minutes broken into 3 sessions for Trans Am, TA2 and the production classes) and two 100-mile races (one for Trans Am and the three production classes; and the other for TA2).  Depending on the circuit, the 100 mile race fits into a 90-minute window, including pre- and post-race activities.

Tony Parella is majority owner of the Trans Am Race Company.