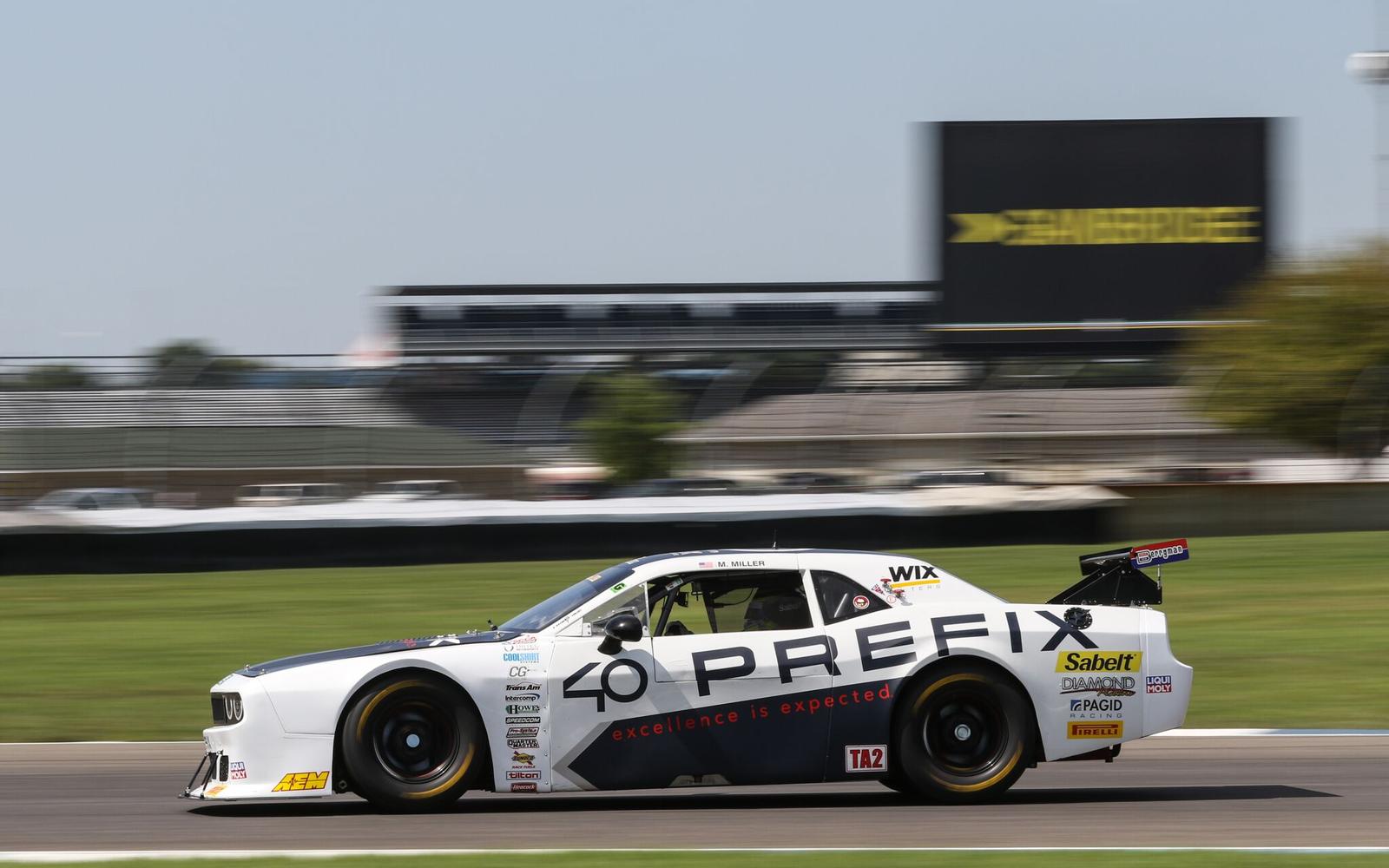 INDIANAPOLIS, Ind. (3 August, 2019)- Immediately following the Trans Am, SuperGT, GT feature at Indianapolis Motor Speedway, it was the T2 powered by AEM group’s turn on the 2.43-mile road circuit on Saturday. Twenty-one Trans Am Series presented by Pirelli TA2 drivers unloaded the maximum horsepower for the chance to take pole at the infamous Brickyard. But, there can only be one pole starter, and Marc Miller in the No. 40 Prefix Dodge Challenger claimed the honors, eclipsing Rafa Matos’ time by 15 hundredths of a second with a  fast lap time of 1:30.733 seconds.  The top four times were separated by just over nine-tenths of a second.

“Everything is falling in exactly how we wanted it,” said Miller. “A lot of work had to be done to the car after it went into the barrier at Detroit. We made some changes to the set up and did our homework on what we wanted to unload like. The Prefix hemi has been rock solid with a lot of torque, the Dodge body is pretty slippery in a straight line, and the car is awesome under the Alcon brake calipers from Pro Systems and PAGid Race Pads. The Stevens-Miller guys don’t miss a beat.”

Miller took fastest-time in the opening two laps, then parked in his Stevens-Miller Racing machine in pit lane for the majority of the session, until Matos in the No. 88 3Dimensional Services Group Chevrolet Camaro bested his opening lap time with a time of 1:30.883-seconds. Matos, who took pole position last year in Indy, knocked off one more lap before calling it quits for the day.

“I think qualifying was a great effort by the team,” Matos said. “We’ve been suffering some engine issues throughout the weekend and we thought we figured it out by qualifying, but there were still some lingering problems. I thought I had a great lap coming but the engine just gave up in the middle of the lap and unfortunately, we couldn’t get pole position. But, we are happy with P2. The guys are working extremely hard to find out what the issues, but we got everything we could from the car in qualifying. The car is consistent, and I think we will have a really good race tomorrow.”

With just a few minutes left in the session, Miller waited for a clean gap on track and sent his Prefix-powered Dodge into a flying lap to take back pole position.

Scott Lagasse Jr. in the No. 92 SLR/Fields Racing/M1Racecars Chevrolet Camaro clicked off a fast time of 1:31.480 to start third for Sunday’s 100-mile feature.

“It was a good qualifying session for us,” Lagasse Jr. said. “Chevrolet is good at Indy. We are kind of working on things now. We spent all practice working on race trim, so to lay that kind of qualifying trim down is good. I hope tomorrow is hot and slick, because that is what we prepared for.”