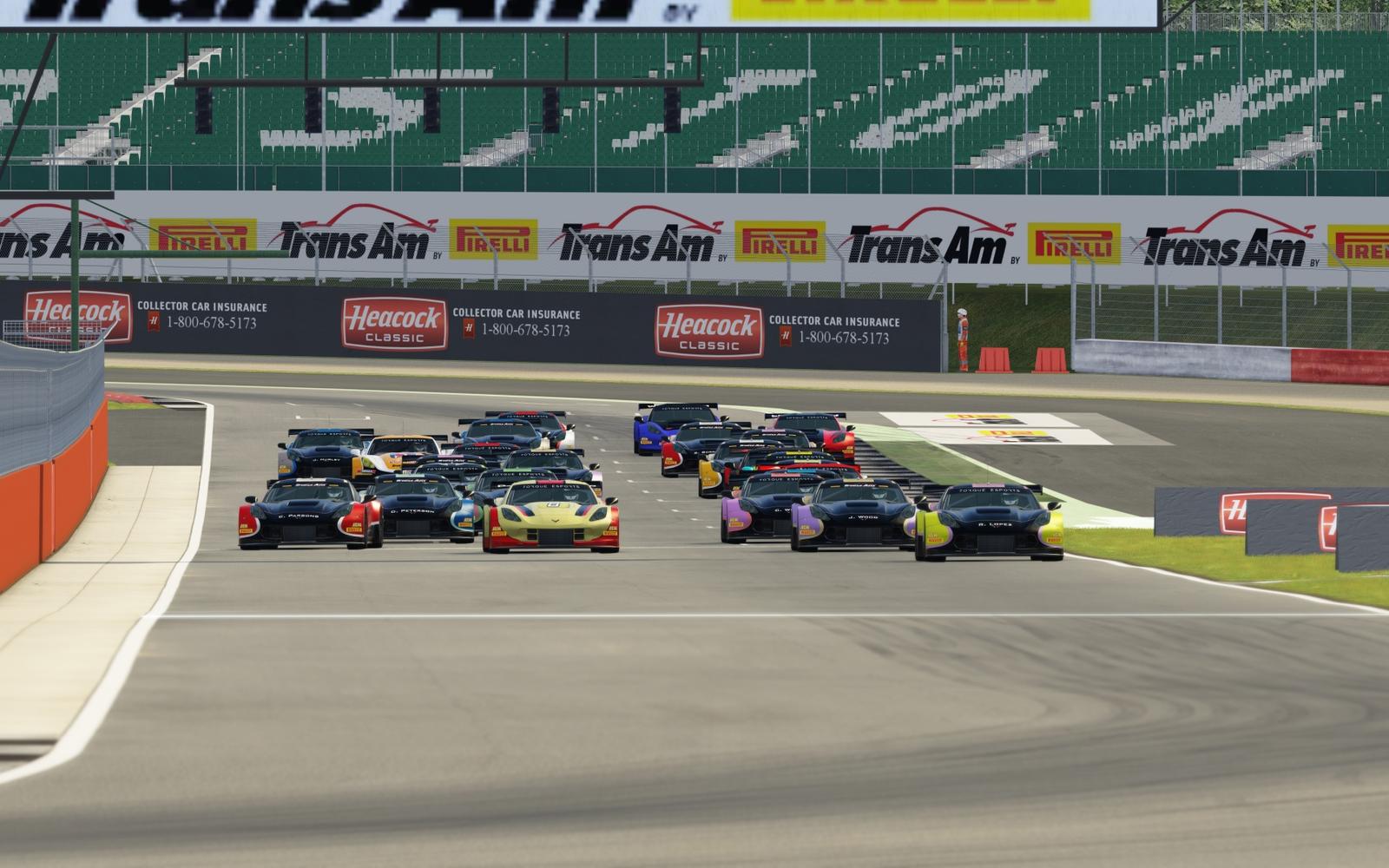 Towcester, United Kingdom, UK (20 June 2020)- Josh Hurley put a stamp on the Trans Am by Pirelli Esports Championship on Saturday afternoon after a victory and third-place finish on a virtual Silverstone Circuit secured the inaugural championship title, $20,000 in cash and prizes, a seat at the end-of-season champions awards banquet and a Crystal Sensations trophy for the California racer.

Hurley entered the finale three points behind leader Tyler Kicera. But, with Kicera’s typical fast speeds hindered by a 40kg weight penalty that carried over from the previous round, Hurley was able to move even closer to the title with some bonus points for qualifying on pole with a fast time of 1:59.808-seconds. The feat tied up the championship entering the opening round, ratcheting up the drama ahead of the double header.

“I really thought Tyler (Kicera) deserved the championship as much as me,” said Hurley. “If either of us won, I’d be a happy guy. It’s great to win a championship again- it’s been awhile (2008 in TDI Cup). I’m super excited and hoping, just maybe we can make this lead to show what we can do in a real car, even if it’s just a couple races.”

“The start was really close, and that was a bit stressful,” explained Hurley. “I knew if people got by, especially (Ed) Sevadjian, it would be really hard to repass them, and I did not want to risk that. But after the start in Race 1, it was a cruise.

“It was a struggle with the new rig, and it was not comfortable, but we got there,” Hurley continued. “What really helped was I was able to bring my old pedals and was able to bolt them to their rig. I’m eternally grateful to PittRace. They were tremendously nice to let me use their sim. It’s located in the middle of their store, so people were buying stuff while I was setting up my pedals and getting ready, we generated a bit of a live audience here on location.”

In Race 2, Dylan Archer (No. 32 Archer Brothers Racing) spent most of the race fending off Kicera, who had to win to reclaim the championship lead. But driving under an immense amount of pressure on the very physical track, Archer kept his composure, despite some very heavy pressure from Kicera, all the way to the finish line to claim his second win of the 16-race season.

“Kicera got into the back of me, I know that wasn’t intentional, and then I had to just keep the car under me. Then going through the Esses, the rear end stepped up and I had to catch the car,” Archer said. “I had to keep my head down, and after I made those mistakes, I set my fastest laps.”

Archer’s performance in the esports championship, relit his dad’s (Bobby Archer) passion for Trans Am racing. Now, the father-son duo is actively searching to get into a real TA2® powered by AEM seat for the 2020 season so that Dylan can continue the Archer family tradition of Trans Am racing.

“It’s been a lot of fun getting to know the guys and how they race, so when we get to go back to racing in TA2® I know what to expect from them,” Archer continued. “They’re an amazing group, racing clean and being over-top friendly. I like racing with champions like Ernie Francis Jr., what a great guy. I think it was great for Trans Am to make this happen. It was great for everyone’s sponsors, including mine- Forgeline, Tommy Archer Realty, Caldwell Banker and Team Tech.”

Kicera (No. 4 Howe Racing Ent/Carbotech Brakes) finished second in the final race of the season, but that wasn’t enough to keep Hurley from clinching the championship by 10 points. (454 points to 444 points). Hurley rounded out the podium in third.

“I knew going into it that 40 kilograms of extra weight was going to be a huge disadvantage, which was obvious in qualifying and in the first race,” explained Kicera. “I just didn’t have the pace. No matter how hard I pushed, it just wasn’t there. I was hoping Josh (Hurley) would have some unfortunate luck, or something would go our way, but it didn’t today. Congratulations to Josh. He was playing the odds and strategy to be there at the end of that last race, and he had the pace to get around me, for sure. I think he was letting me fight it out with Archer. I would have liked to have won the last race of the season, but Dylan (Archer) did a great job and he earned it.”

While Kicera didn’t win the title, he did emerge from the inaugural Trans Am esports championship with a focus on returning to real world racing in Trans Am as he eyes at least two races this season.

“I will most likely be at Watkins Glen, and possibly Road America,” Kicera said. “We will announce with which team closer to the events.”

Ernie Francis Jr. finished the esports championship in third with Sevadjan in fourth and Rydquist in fifth.

“First of all, I want to congratulate Josh (Hurley) and Tyler (Kicera) on an amazing championship run,” said Rydquist. “My goal was to finish sixth in the championship, and we finished fifth. I’m excited that at least I had some speed during the championship, but I am ready for real racing. It was a good, fun season. Thanks to the whole organization.”

With the esports championship wrapped up, the Trans Am Series presented by Pirelli season restarts next weekend (June 26-28) at Mid-Ohio Sports Car Course.

By downloading the Trans Am by Pirelli Racing App, fans can access exclusive Trans Am content. Fans can watch the live stream of the races, follow their favorite drivers through the field by switching from six different camera angles, access live timing and scoring, keep up with the latest news and download the event program all from the Trans Am by Pirelli Racing App (https://bit.ly/3dxc6Lg).

The Mid-Ohio race stream will also be available on the series Facebook  (www.facebook.com/gotransam) and YouTube (https://www.youtube.com/user/TheTransAmSeries) pages.