ELKHART LAKE, Wisc.  [August 27, 2017] –  Ernie Francis, Jr., and Sheldon Creed emerged with victories over both their follow Trans Am Series presented by Pirelli competitors and the elements in their respective races this morning at Road America.  For Creed the TA2 class victory marked a career first; for Francis the TA class win marked his 29th as he approaches the all-time Trans Am win mark.  Jason Daskalos, in his Trans Am debut, and Brian Kleeman also captured wins in the TA3 and TA4 classes, running alongside TA in the multiclass competition.

Both Trans Am races, the TA, TA3 and TA4 Road America Classic, and the TA2 Road America Muscle Car Challenge, took place under wet conditions—varying in intensity throughout the iconic 4-mile course at Elkhart Lake.

Ernie Francis, Jr., in the No. 98 Buoniconti Fund Ford Mustang, began the day in second place behind pole sitter Martin Ragginger, in the No. 50 Goshare Axalta Chevrolet Camaro, before taking the lead only three laps into the race after the No. 50 suffered a mechanical failure.

Francis would lead the initial 15 laps comfortably, pushing the gap well over 20 seconds, despite the efforts of Cliff Ebben, in the No. 36 Stumpf Ford/ McMahon Group Ford Mustang, who was beginning to whittle away at the lead as the field went under a full-course yellow to remove debris on course.

On the restart, Francis would immediately lay down his fastest lap of the race and once more begin to gap Ebben and the field before securing his sixth TA class win of the season in relative comfort.

“At the beginning of the race Martin had some pace on the first two laps,” said Francis. “We were just trying to keep him in sight knowing it’s a long race, but his car didn’t last so that took the pressure off there.   From there we just turned some consistent laps; it looked like we were building up a pretty big lap on the rest of the field.  When the restart came out, the track was drying off so we knew we could push it a little harder.  We went for it, dropped several seconds off our best time on the restart.  The car felt good, the track felt good, and it came together for another win.”

“The crew was updating me on how Cliff was closing the gap a little bit,” said Francis.  “I wasn’t too worried about it; we weren’t really pushing the car all that hard and knew we should be able to keep him at bay.  I knew we had the pace; it was just about controlling the race and controlling the pace of the field.”

Francis’ 29 Trans Am wins through his TA4 and TA class career now moves him into second place on the all-time series win list, tied with Mark Donohue.

Cliff Ebben, of nearby Appleton, Wisconsin, would finish second comfortably as well, while Vinnie Allegretta finished third to capture his sixth podium of the year— remaining in second, behind Francis, in the TA class championship points.

David Pintaric, in the No. 57 Kryderacing Cadillac CTS-V, and Tomy Drissi, in the No. 8 Ave Motorsports Chevrolet Corvette, would complete the top five with fourth and fifth place finishes, respectively. 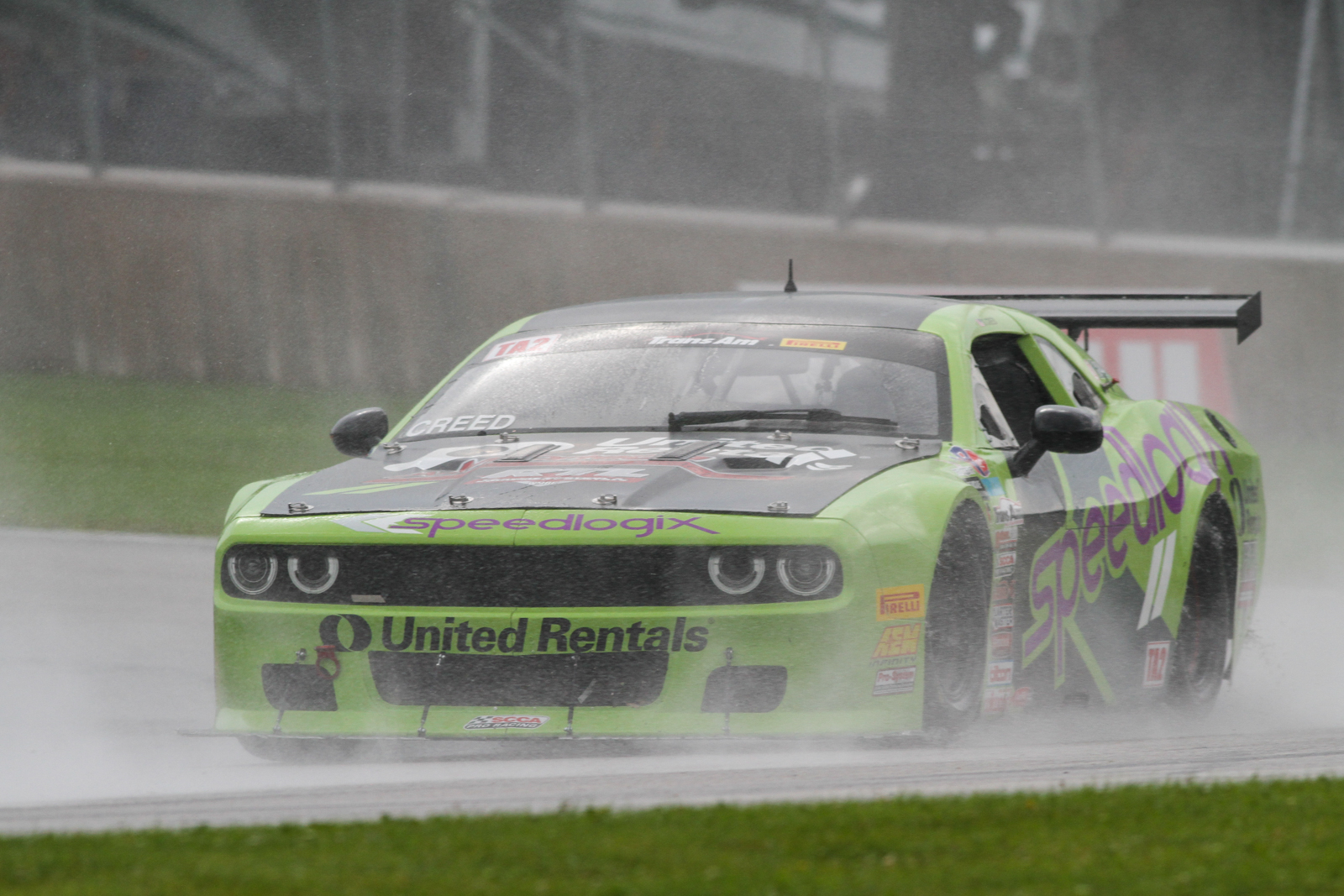 In TA2, Sheldon Creed captured his first career TA2 victory in his fourth appearance behind the wheel of the No. 11 Speedlogix Dodge Challenger.  Creed began the race in 12th position and worked his way up through the field and into second place over the first 10 laps of the race.   Creed would then pursue the No. 34 Bestline Superior Lubricants Ford Mustang of defending race-winner Tony Buffomante for 10 additional laps before taking the lead with five laps to go.

Creed was quick to credit his background in dirt and off-road racing as a major factor given the soggy Road America conditions.

“My dirt background for sure came into play with a bunch of throttle control,” said Creed. “I’ve never really raced a car in the rain other than stadium super trucks. I had to be really mindful of the line out there and the throttle control, just getting the tires hooked up—if you spun them, you were going backwards.  I just tried to settle in at the start. I followed Shane (Lewis) around at the beginning and he showed me a few things.  Gar (Robinson) did the same.  But they were for sure being cautious and playing the points game.  Then I got in behind Tony (Buffomante), and he was fast.  He pulled away for a bit, but then it got stupid slick.   I capitalized on one of his mistakes and tried to keep it smooth from there on out.”

Creed hopes his success, and more importantly his road course experience in Trans Am, pays off as he continues to work his way up the motorsport ladder.

“Coming to Trans Am was all about getting more seat time on road courses,” said Creed.  “I haven’t raced a ton of them in cars, it’s just seat time— it’s what you want.  I’m doing Xfinity this weekend for the same reason.  When you get that opportunity with a big-time ride, you want to be ready. This is a good step in the right direction.”

Buffomante would hold on to finish second, whittling away another layer of points as he pursues current championship leader Gar Robinson, in the No. 74 Pura Vida Tequila/ 74 Ranch Resort Chevrolet Camaro, who finished sixth as the two, along with Shane Lewis, head into the final five races as the primary championship contenders.

Justin Haley, in the No. 99 Justin Haley Motorsports Ford Mustang, would finish third to complete the podium after a second to last lap pass over Cameron Lawrence, in the No. 19 Class Auto Centers Chevrolet Camaro, who secured fourth position.

The race was one of highs and lows for Lawrence, who turned the fast lap of the race— a 2:33.243.  Lawrence began the race in seventh position but charged up to second position after the first two laps before pursuing the No. 88 of polesitter Rafa Matos.  Matos would spin off course, leaving Lawrence to the lead— however, officials would hand Lawrence a drive through penalty for avoidable contact in the incident, setting the No. 19 back to 16th.  Lawrence would spend the remainder of the race moving his way up through the field, consistently turning fast laps, and eventually finishing fourth.

The TA2 top ten also included, in order, Shane Lewis, Tom Sheehan, Scott Lagasse Jr., Lawrence Loshak and Matt Parent.  Creed's win marks the first victory of the year for the Dodge Challenger and the first time that the Chevrolet Camaro, Ford Mustang and Challenger have all three appeared on the TA2 podium. 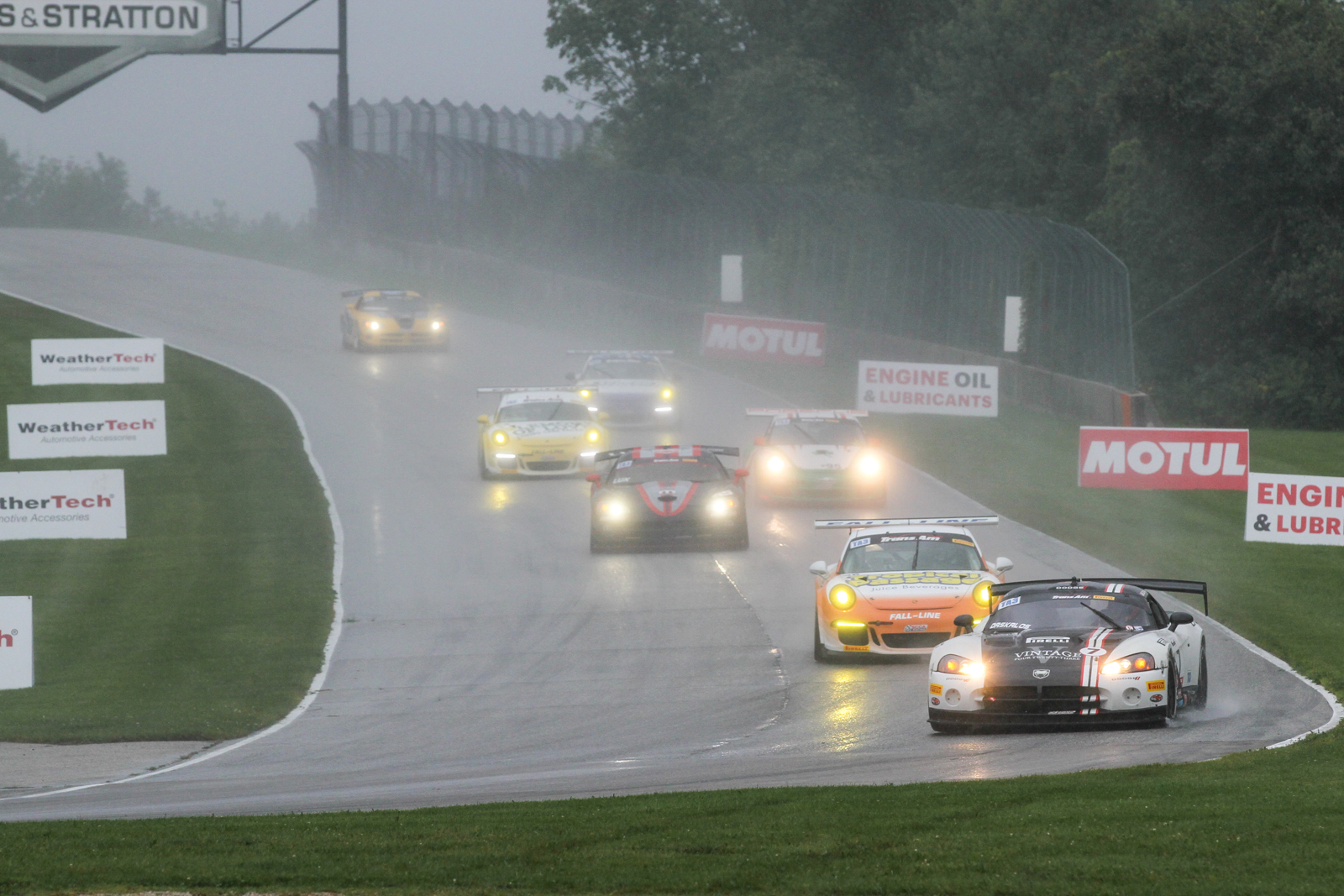 Trans Am debutant Jason Daskalos, in the No. 7 Daskalos Racing Dodge Viper, won the TA3 class after leading every lap.  The No. 7 ran well throughout the wet conditions, often running up with and amongst the TA class while holding off the No. 46 Fall-Line Porsche 911 GT3 Cup of points leader Mark Boden.

“I definitely enjoyed it,” said Daskalos.  “It’s good to be back racing after running World Challenge for ten plus years. Visibility was a little tough out there but the Pirelli rain tires were shockingly good; I was pretty amazed by the performance.  I’m in good company here, and I’m looking forward to more races and more victories here in Trans Am.”

Boden finished second to keep his podium streak of seven races this year alive, as he carries a solid points lead over teammate Tim Kezman in the TA3 championship into the next round at Watkins Glen. 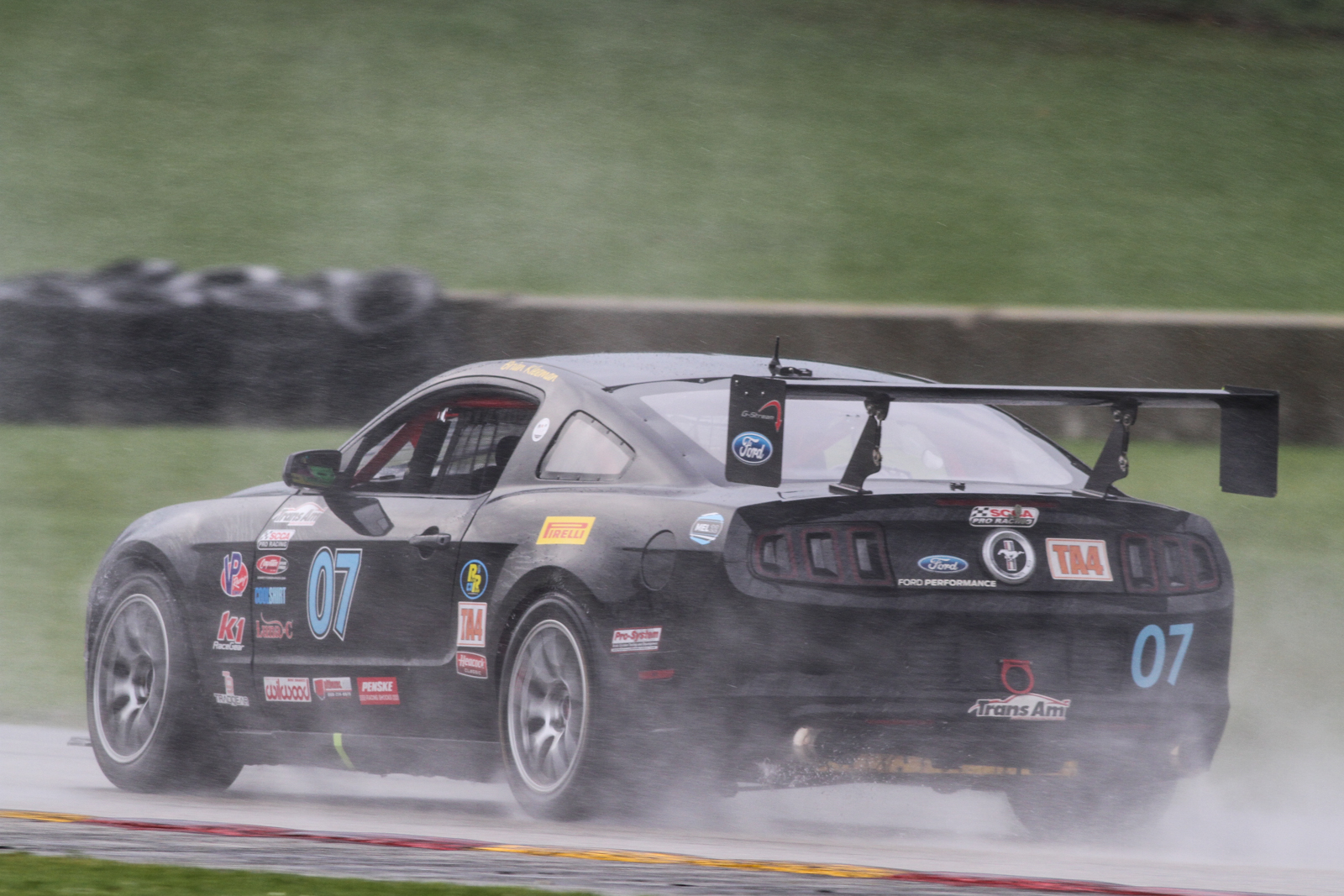 In TA4 Brian Kleeman’s class domination continued with his fifth win of the season behind the wheel of the No. 07 DWW Motorsports Ford Mustang; however, the pressure from fellow championship contender Todd Napieralski, in the No. 39 Chevrolet Performance/ TREMEC Chevrolet Camaro, combined with the weather and multi-class elements did not make it easy on the No. 07.

“This track is really tricky in the wet,” said Kleeman.  “Especially with some of the new asphalt they’ve laid down in some sections.  You have to take a dry line in some corners, wet in others, and that can change quickly.  We definitely had a few moments that were sketchy, but we just put our heads down and tried to keep it on the track— we knew attrition would play a part today.

“Traffic always comes into play here—especially in the wet with all the mist and spray,” said Kleeman.  “The TA cars come up on you really fast on the straights here, hats off to the DWW crew that put together a car with a great setup, that goes a long way here.”

Napieralski would finish second for his fifth podium of the season, while rookie JR Pesek, in the No. 07 Rennsport KC Ford Mustang, finished third for his third consecutive podium finish.

The Trans Am Series will now head east to Watkins Glen International for Round 9 of the Trans Am Championship on September 10. 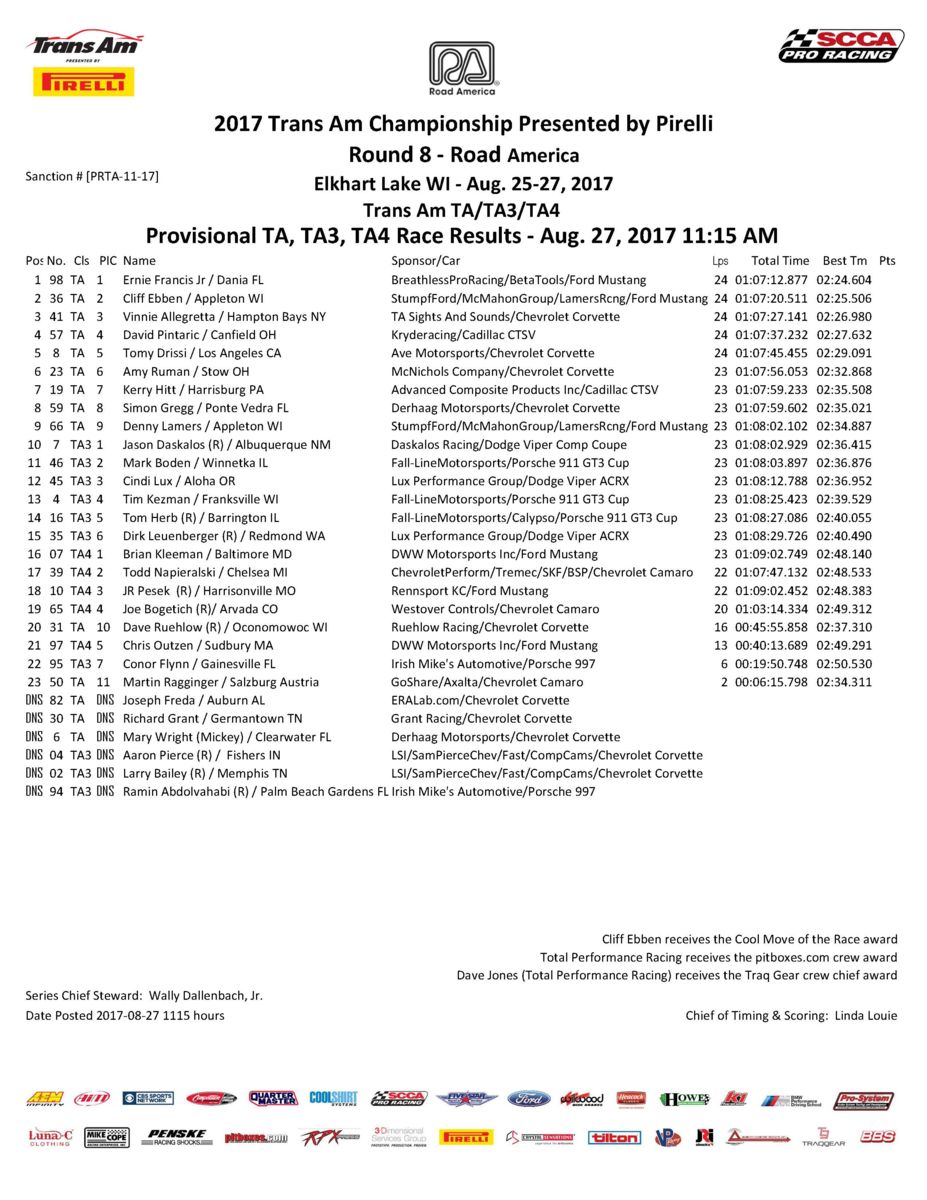 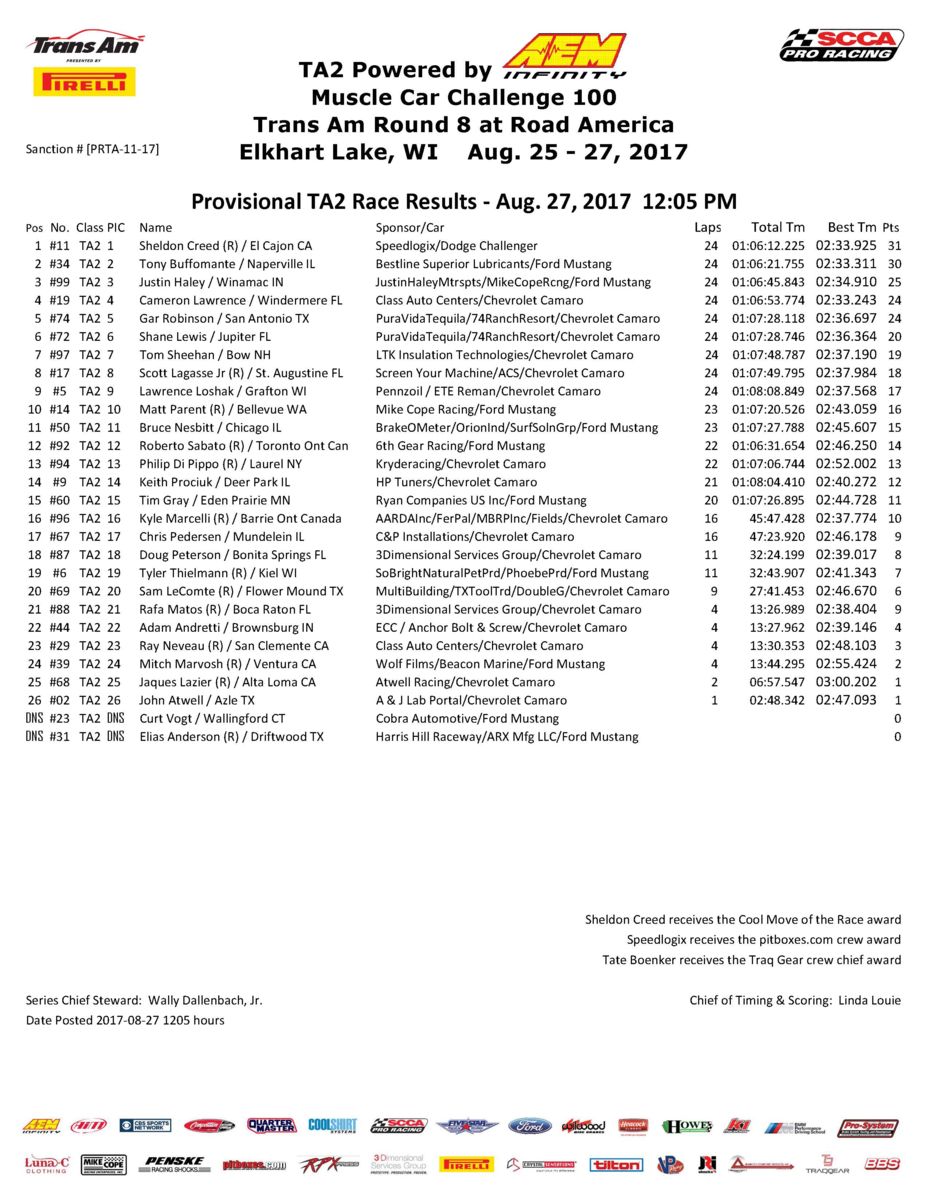