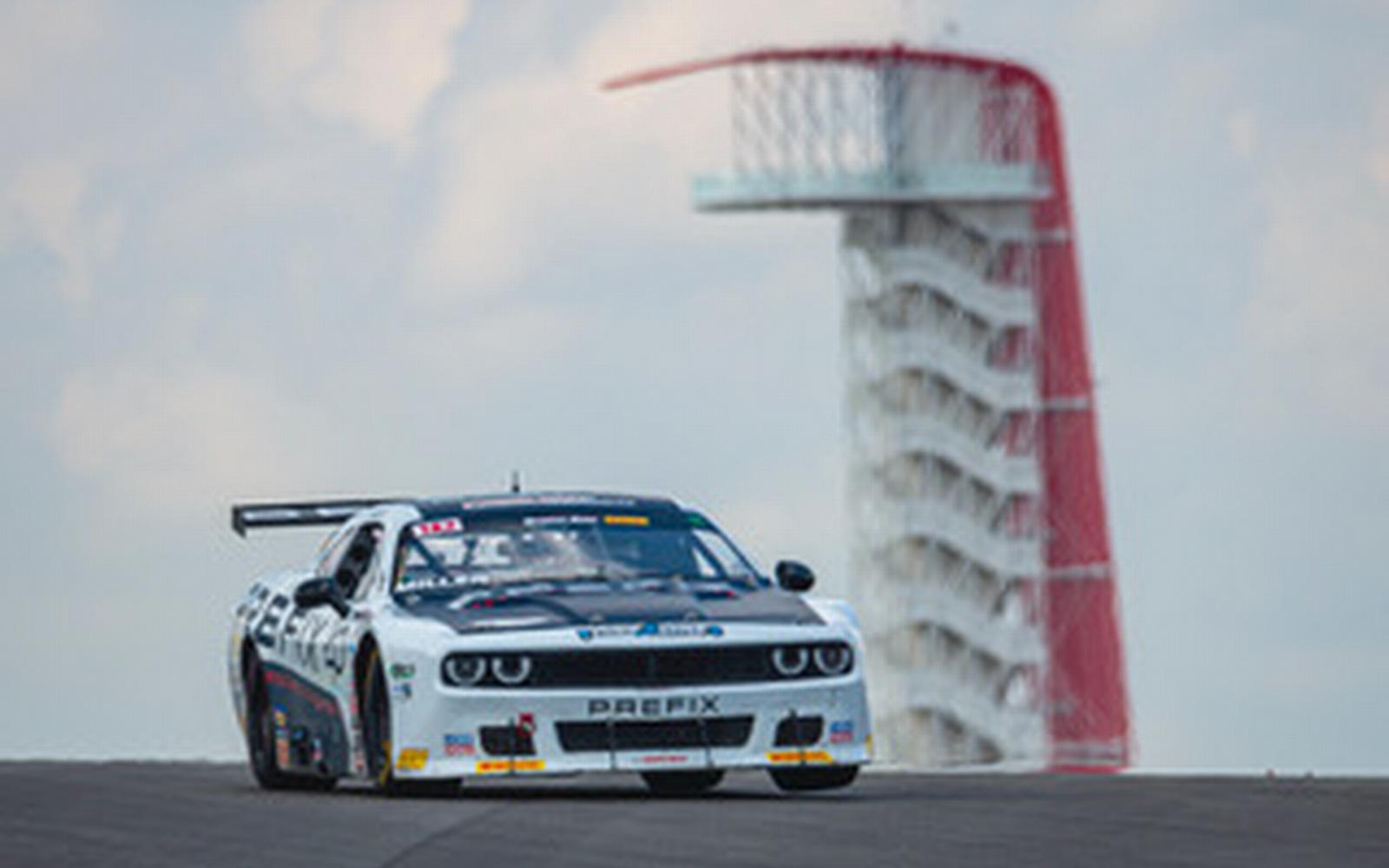 Austin, Texas–Stevens-Miller Racing’s Marc Miller “sealed the deal” this past weekend at Circuit of the Americas taking The Trans Am Presented by Pirelli’s TA2 2019 championship. Miller, driving his PREFIX 40th Anniversary Dodge, dominated the weekend taking pole, fast time and winning the race.

Miller said, “The championship hasn’t been on my mind since Detroit. At the beginning of the year my guys and I were focused on the championship and getting points. After a disappointing finish at Detroit, I met with my guys and we decided to stop worrying about tire management, long runs and all the other scenarios. We changed our focus from the championship – to winning every practice session, getting every pole, and winning every race. Our entire effort was to be fastest every time we hit the track. I wanted to establish that I was the guy to beat from the start of practice.

“Trans Am is the oldest American sports car series and it’s an honor to be the champion,” Miller continued. “The season is long with a lot of hard racing and it took a ton of dedication and effort by the entire team. Arriving at COTA, I could win the championship by simply taking the green, but to me, it was more important to dominate the race rather than worry about just starting to collect points. The title wasn’t even on my mind until I shared the spotlight with the team on the podium. Having all of them up there with me made it all the sweeter.

“So many people to thank, especially my family and my wife, Tabitha, for supporting the time away and always watching live timing. We were so focused on the car that my wife at home sometimes knew more about what was going on than I did.

“I have to thank Joe Stevens, who absolutely handed me the keys to a great car and my crew who were as determined as I was to make our Dodge Challenger a championship-winning car. I really appreciate PREFIX and the support of not just their performance division, but everyone in composites, interiors, R&D and the front office. I also have to thank every partner on our team: Sabelt America, Pagid Racing, Pro-Systems, Howe Racing Enterprises, Liqui Moly USA, Berryman Products, Wix Filters, and ProcureIT Network. I am honored to represent these companies and thankful for the opportunity.”

SMR Team Owner Joe Stevens said, “What a ride! I’m so proud of Marc and my whole team. Every member of my team can say they are Trans Am champions because they are. We elevated our program on every level this year and it has paid off. I can’t thank my people, my drivers, and our partners enough. But there is still work to do.

“Dillon Machavern in our Liqui Moly Ford Mustang is just a few points out of second and we’d really like to finish with our pro drivers one-two in the championship. We also want to get Brian Swank in our Berryman Products Chevrolet Camaro into the top 10. Nine points separate ninth through 13th, so it’s really tight. A good finish at Daytona and Brian can do it.”

Machavern said, “We had a good run going and our Liqui Moly Mustang was getting better all weekend. We had some help from Howe Racing Enterprises this weekend and the car was really good in the race. I’d just moved into third when I was hit by another car with only a couple of laps to go and that dropped us to eleventh. I put my head down and was able to finish sixth. I can’t say enough about all the guys, it was extremely hot but they never stopped working to make the car better. I also want to congratulate Marc and the entire team on winning the championship. I’m so proud to be a part of Stevens-Miller Racing.”

Brian Swank said, “We came into COTA hoping to just make it through the extreme heat and try to gain some points. With the help of the SMR crew and my car chief, Tate Boenker, we did just that. I’m only three points out of the top 10 going into Daytona and that’s my goal. With five of us so close it will be tough, but SMR always gives me a great car and the guys always give me 110 percent – I just have to do my job and bring her home with a solid finish.”

Of the 32 cars starting, SMR had a total of seven cars entered with Alex Wright, Drew Neubauer, and Jeff Wood rounding out the entries.

Wright said, “COTA is a world-class race track, and we had the car set up well for it. It was great to race in with such a big field. The heat made the race extra challenging, but I'm pleased with the result, and looking forward to the finale in Daytona.”

“We’ll be back with seven cars at Daytona,” Stevens said. “We’ve got a bit of a break, but it’s time to start work on 2020. Our No. 77 Liqui Moly Ford Mustang will be on display at the SEMA Show in Las Vegas and Dillon will be there signing autographs. It’s been a great year, TA2 has some of the best competition of any series and we’re proud to have won the championship.”

Stevens-Miller Racing (SMR) over its history has one of the highest winning percentages in Trans Am’s TA2 category. SMR’s staff has earned 25+ podiums, two championships, multiple Hard Charger Awards, Rookie of the Year, and more. The team’s focus is achieving the driver’s desired goals. Whether that’d be just having fun, developing driver skill, or winning championships, SMR does it all and has the winning history to back it up. See www.stevensmillerracing.com for more details. IMAGES By Chris Green