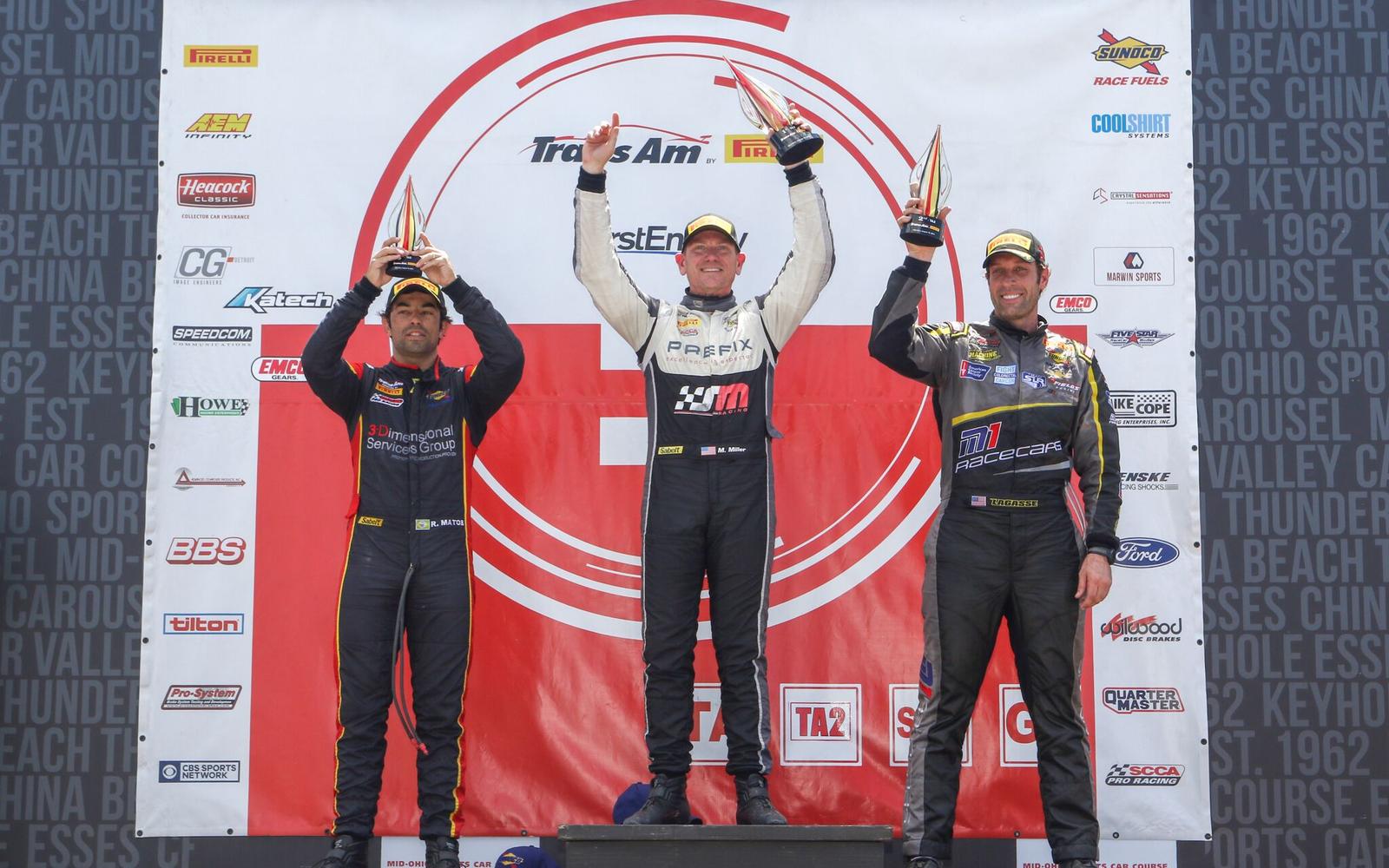 With competition ramping up in TA-2, M1 Fastrack Racecar drivers Scott Lagasse Jr., Jacob Mosler and the SLR/Fields
Race team picked up the pace over the last two weeks which included a race at the famed Indianapolis Motor Speedway
on August 4th and Mid-Ohio Sports Car Course on August 11th.

In Indy, both drivers showed good speed in practice with the rookie Mosler qualifying 9th in his Mosler/M1 Fastrack
Racecars Camaro. His best starting position of the season. Lagasse Jr. qualified 3rd in his M1 Fastrack Racecars Chevrolet
Camaro.

When the green flag flew, both Lagasse Jr. and Mosler were aggressive in their efforts to move forward. Lagasse Jr.
followed leader Marc Miller into turn one and was able to make a pass for 2nd place. Mosler made a similar move going
into turn one and took over the 8th spot. Rookie Mosler would race the entire 75-minute race in an intense battle for
positions, with an impressive career best 7th place in only his seventh TA race and his first visit to Indy.

Lagasse Jr.'s battle in Indy would take a different direction, as he quickly climbed to 2nd position and would run there
comfortably for the first 22 laps, but on lap 23 Lagasse Jr. began having an engine misfire and had to retire from the
race.

With 2 races in 2 weeks, Trans Am presented by Pirelli headed to Mid-Ohio Sports Car Course for a race this past
Saturday afternoon. Lagasse Jr. was looking to improve from his 3rd place finish at Mid-Ohio last year, while this
would be Mosler's first trip to Mid-Ohio in the Trans Am Series.

August 11, 2019- Mid-Ohio Race Recap
The FirstEnergy Muscle Car Challenge at Mid-Ohio is always one of the best championship rounds of the season with
plenty of fans and competitors on hand for action at one of the best road racing circuits in America. In the initial practices on Thursday and Friday, Lagasse Jr. and team methodically worked through some minor handing challenges while running on older race tires to better prepare for the Saturday race conditions. Mosler and his crew, also practiced on used tires with the clock not showing just how good both cars and drivers were at that point. Lagasse Jr. would post times in the top-6 and Mosler and
his car were equally impressive as he posted top-10 speeds early on in practice in his No. 17 Mosler, M1
Fastrack Racecars Camaro.

In the final practice both drivers would go out on new Pirelli tires and quickly showed speed while preparing for qualifying. Lagasse Jr., still in need of a couple adjustments would post the 7th fastest time and Mosler the 9th fastest time.
After several final adjustments to both cars, they rolled out for their 20-minute qualifying session, but the red flag would stop the action before the first lap was complete due to a car going off course and into a retaining wall, delaying qualifying. The long delay would shorten qualifying to only a few laps, and Mosler found himself caught up in slower traffic repeatedly and wasn't able to put in a clean lap. Unfortunately, Mosler would start the race a disappointing 18th position. Lagasse Jr. would only get one clean lap in qualifying, but it was good enough to place him 3rd in the 30-car field.

Fans from all over came to Mid-Ohio Sports Car Course to watch the Trans Am FirstEnergy Muscle Car Challenge which
raced just before the NASCAR Xfinity Series race. As the green flag flew, both drivers settled in, and ran fast
and consistent laps. In the first turn, Lagasse Jr. made a pass for 2nd place, and was all over the bumper of leader Marc
Miller.

While Lagasse Jr. was running comfortably in 2nd, Mosler was in a war zone, trying to work his way toward the Top-10.
On lap 11 while making a pass for position, he was caught up in an accident that caused him to retire from the race.
Lagasse Jr. drives his No. 92 M1 Fastrack Racecars Chevrolet Camaro Mosler celebrates his 7th place finish at Indianapolis Motor Speedway.

Throughout the race, Lagasse Jr. chased the leader who at times would pull out to as much as a 3 second lead, but Lagasse
Jr.'s consistent lap times and experience in traffic kept him close. Lagasse Jr. finally had a shot to get inside of Miller in Turn 9 placing the duo side by side for just a few seconds until Miller regained the lead. With a late race caution, the field bunched back up for the final restart, Lagasse Jr. was glued to the back bumper of Miller and made every effort, but Miller and his Dodge were just too fast.

Lagasse Jr. would complete the race in 2nd after an impressive performance that thrilled the crowd. Mosler would finish 26th,
after being forced to retire from the race from his accident.

"At Indianapolis and Mid-Ohio, our M1 Fastrack Cars showed good speed, even though both Scotty and Jacob ultimately
had issues. With these challenges we have been able to grow as a team and learn from those circumstances. We are
excited how well the cars are working and the interest in the cars. We are heading to tracks where our M1 Fastrack
Racecars team produced good results last year, and I believe that this will be the case again this season." - Lee Quinlan,
M1 Fastrack Team Manager.

"It was awesome to get my first top-10 at Indy, and the Mid-Ohio race was heading in the right direction, but it was
really eye opening, how much the qualifying mess effected our entire weekend. It's all positive, we just don't have the
result to show for the effort. I learned a ton and we were fast; we just didn't get the opportunity to prove it and get the
finish. The little details mean so much. Thank you to Beau and Katech Engines for their help throughout the race
weekends. I'm grateful to Scotty, Scott, Lee and all of the guys for their efforts as well. I'm looking forward to getting
back in the car at Road America." - Jacob Mosler

"Mid-Ohio was a lot of fun. Mark and Rafa are both great to race with as they respect your equipment but will race you
hard for every inch. I am proud of our M1 Fastrack Racecars team. We worked smart and had one of the best cars in the
field at Indy but couldn't close the deal. We all performed well this past weekend at Mid-Ohio as a team, and we earned
a solid finish at a tough track. A special thank you to Chris and Lee with Fields Racing who add so much to this program.
Our joint efforts have really begun to gel, and the guys are beginning to click. Besides my car's performance, I am excited
for Jacob and his first top 10 finish at Indy as well as his performance at Mid-Ohio. Sometimes the scoreboard doesn't
tell the entire story. Jacob is impressive and his ability to learn these cars and race at this level in a very short amount of
time will become evident to all shortly. He has put a lot of work into this season and has made big strides as a rookie. -
Scott Lagasse Jr.

For more information or if you are interested in M1 Fastrack assisting you with a new racecar or chassis, please contact:
Lee Quinlan: lee@fieldsracing.com

Scott Jr. (Scotty) has been a driven individual from an early age, excelling in sports and as a high achiever in school,
earning a college degree. Scotty currently competes in a limited schedule in NASCAR and races full time in the Trans Am
Road Racing Series. He is a mentor and role model to our younger generation, an avid cyclist and recognized advocate
for Bicycle and Pedestrian safety. Please visit www.teamslr.com. Keep up to date with Scotty by following him on

About Jacob Mosler:
Jacob began working around motorsports with his father at a young age. However, he didn't start racing cars until just a
few years ago, where he began racing with NASA in a TA-2 style car. Jacob is a student of the sport, a quick learner who
after driving a few faster cars realized the value of the Spec racer Ford class and spent time learning the craft there. In
2019, Jacob made the jump to Trans Am TA-2, and is currently competing full-time in Trans Am.