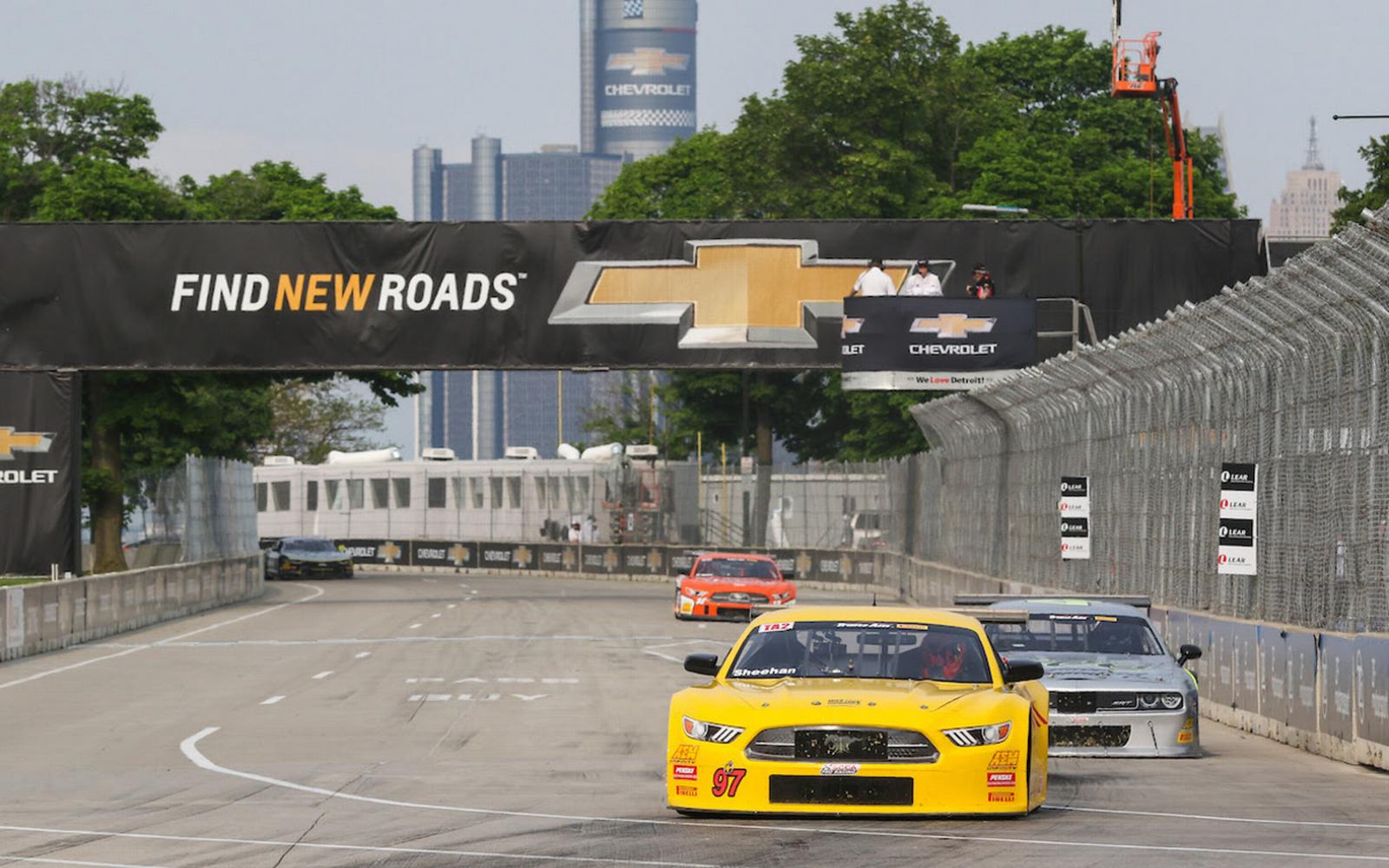 Detroit, MI - June 3, 2019 - Rounds 5 and 6 of the 2019 Trans Am presented by Pirelli season saw two highly contrasting races on the hugely challenging Detroit street circuit, June 1-2 in warm spring weather and in front of large Motor City crowds. The No. 97 LTK Insulation Technologies Ford Mustang driven by Tom Sheehan rebounded from a disappointing weekend at Lime Rock to record two highly creditable finishes, with Sunday's race featuring a peach of a drive from Sheehan who was closing in on a podium finish only for brake failure to rob him of a top result.

Uniquely in the Trans Am season, the weekend at Detroit features only the most competitive class of Trans Am racers, the TA2 cars. Billed as the Chevrolet Detroit Grand Prix presented by Lear, it also is the only weekend to feature two races, one on Saturday and one on Sunday, making it the most intense weekend of competition of the year. Testing for the cars began Friday morning. By noon on Saturday it became clear that Damon Racing and the LTK crew had made rapid strides from Lime Rock the previous weekend with pilot Tom Sheehan consistently finding speed pacing the top ten racers.

Saturday morning’s race is the TA2 Muscle Car Challenge powered by AEM and went for a duration of 36 laps distance. A thrilling round on the streets of Belle Isle featured four different leaders, while a super smooth drive from Sheehan saw him improve from 10th at the start to a finishing position of 8th that was subsequently upgraded to 7th due to an infringement by Rafa Matos. A best lap of 1:37:209 and 19 Championship points - making it the best result of the season so far for the Granite State wheelman.

There is no separate qualifying session for Sunday’s race with the best lap times from Saturday’s race determining the grid for the race dubbed The Motor City Dash. Starting from 8th on the grid for Race 2, early scrimmaging saw Tom Sheehan in the No. 97 LTK Insulation Technologies Ford Mustang drop back to 11th before a steady charge saw him pick off rivals one-by-one. Steady became spectacular advancing to fifth place. The No. 97 looked destined to better the previous day’s finishing position. A best lap of 1:38:182 on lap 25 was bettered still on lap 32 with 1:37:636 and Sheehan was charging as the race neared its climax. However, up ahead, Misha Goikhberg got loose, causing him to spin into the tire barrier as Turn 7 claimed another victim. Goikhberg’s incident brought out the safety car and with limited time on the clock, the debris was not cleared before the race clocked expired. The Dash in Detroit ended under yellow, but not before brake failure had caused Sheehan to retire, agonizingly close to the end of the race and meaning that his fully deserved charge slipped to P11 when the race was halted.

“Detroit had positive energy and we managed to set up a car I liked,” stated Tom Sheehan post race. “ We had some good race speed in the car. Mike Cope put a house set up on our car following practice 2 , It brought the car alive, I did a great job of keeping our car out of trouble up to our last lap. I am disappointed with the bad luck falling on us but excited to get back in the car. We have some time to reset and make the most of the time off we have now through Indy.”

It’s The Brickyard next for Sheehan and the TA2 powered by AEM drivers on the first weekend in August. Keep up with Trans Am driver Tom Sheehan on social media – Facebook page is Damon Racing; Instagram is TomSheehanTA97 and Twitter give us a follow @TomTA2_97.

Putting LTK insulation jackets & covers to work on your project saves your firm real money and time. The LTK Insulation products are so fast and easy. Installation is as fast as identification. Our carefully designed products line allows; fast, sure fit, 100% clean, no tool installation. Product designed for; balance valves, control valves, flex hoses, in line specialties, couplings, quick connects, unions, zone pumps. Your imagination is the only limit….GO LTK!