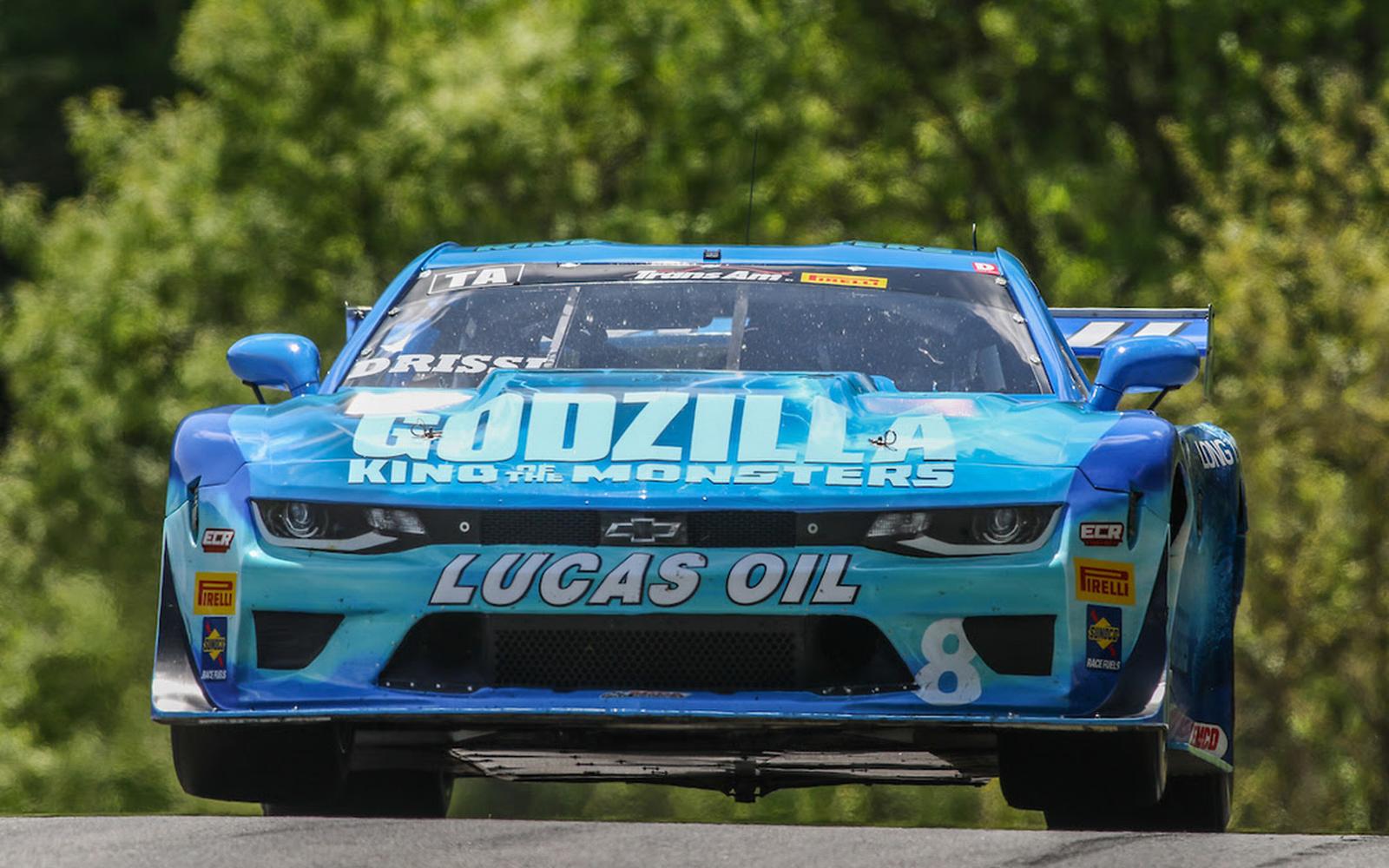 Hollywood, CA. - May 28, 2019 - In its final outing in spectacular “Godzilla: King of the Monsters” guise, the No. 8 Godzilla May 31 / Lucas Oil Chevrolet Camaro piloted by Tomy Drissi finished the last of the early season schedule at Lime Rock Park located in Connecticut with a highly creditable 4th place to keep the Hollywood driver very much in contention for the 2019 Trigon Trophy.

Round 4 of the 2019 Trans Am presented by Pirelli season saw America’s premier road racing series return to Lime Rock Park for the first time since 2015. It’s a circuit the man dubbed “The Rockin’ Moroccan” knows well having finished second there in the SCCA TA Race in 2010, and after the cars had been unloaded and got on the track for the first testing session Saturday morning, Drissi would have been hoping for at least as good a result this time round. His time of 51.431 was 0.188 seconds faster than his nearest rival Paul Fix, and nearly a whole second faster than Vincent Allegretta. However, in practice later that day and in the all important qualifying session on Monday morning (there is no racing at Lime Rock on Sunday), Drissi wasn’t quite able to replicate that early chart topper and had to settle for fourth place on the grid recording his best time of 50.835 on lap 6 of his 15 qualifying laps.

When the race got underway Monday afternoon, Drissi quickly slotted into fourth place and was one of four cars who pulled away from the chasing pack. A green flag all the way made for a smooth race, but the narrow and tight nature of the Lime Rock circuit puts overtaking a premium, and although frequently faster than the cars ahead of him, there was no way past for the 2009 Champion. Drissi recorded his fastest time on lap 6 with a 52.368 and one of the fastest lap times of the whole race going on to secure his fourth place starting position at the finish-line with a commendable result for the team.

Speaking after the race Drissi gave his comments, “Traffic completely played a role in the race on Monday. All the top TA drivers were laying down nearly identical speeds and it was a hard charging race dealing with traffic from the two other classes. Huge implications in the result for us but we stay focused on the championship and take away a good top five result.”

The top of the 2019 Trans Am presented by Pirelli drivers’ Championship now has a very crowded look to it, with the top four drivers separated by just 10 points and the Trigon trophy very much up for grabs. Trans Am now takes its traditional mid-season break before resuming at the world famous “Brickyard” better known as Indianapolis Motor Speedway.

Drissi was a newcomer to the Burtin Racing team last year when finishing 3rd at Indianapolis and will be looking for another podium - at least - this time around. Look out for news to come on sponsors and a new livery on the racecar.

The Godzilla promotion the car featured at Lime Rock was a huge hit with racegoers all weekend. The action in movie theaters gets underway May 31 when the $200M blockbuster Godzilla ‘King of the Monsters’ opens. It’s set become one of the biggest box office hits of all time, with the film following the heroic efforts of the crypto-zoological agency Monarch as its members face off against a battery of god-sized monsters. This time around they include not only the mighty Godzilla, who collides with Mothra but also Rodan and Godzilla’s ultimate nemesis, the three-headed King Ghidorah. When these ancient  super-species—thought to be mere myths - rise again, they all vie for supremacy, leaving humanity's very existence hanging in the balance.

Drissi was delighted to be carrying the monikers of new sponsor Lucas Oil for the first time at Lime Rock. Forrest and Charlotte Lucas started Lucas Oil Products with the simple philosophy of producing only the best line of lubricants and additives available anywhere. Since its inception, Lucas has steadfastly adhered to this corporate objective. Through innovative product research and development, along with aggressive marketing programs, Lucas Oil Products have established itself as a top seller in the automotive industry.

You can hear Tomy’s recent interview on ESPN here or click on the banner below!

Watch the Godzilla 'King of the Monsters' trailer, in theaters May 31, click here!