Trans Am Arrives at Daytona International Speedway for Season Finale

DAYTONA BEACH, Fla. [November 7, 2018] —  The Trans Am Series presented by Pirelli will hold its 2018 Season Finale this weekend at Daytona International Speedway, bringing to a close Trans Am’s 52nd anniversary season on Saturday, November 10.  Trans Am will feature in a single 29-lap, 103.24-mile competition this weekend, with the TA, TA2, TA3 and TA4 classes simultaneously taking to the 3.56-mile sports car course as a part of the HSR Classic 24 Hour at Daytona presented by IMSA weekend.

With Rafa Matos having already captured the TA2 championship and Warren Dexter having done the same in TA4, Trans Am will see two class championship battles come to a close in Daytona: the TA battle between defending champion Ernie Francis, Jr., and Lawrence Loshak as well as the contest between Alline Cipriani and Mark Boden in TA3.

Francis, Jr., in the No. 98 Frameless Shower Doors Ford Mustang, enters the weekend with 22-point advantage over Loshak, in the No. 2 Pennzoil/ ETE / GoShare Chevrolet Camaro, with the defending champion’s hopes at a repeat title boosted by Loshak’s misfortune last round at Circuit of The Americas.  The No. 2 suffered engine issues early on while running second to Francis in the contest, one that Francis would go on to win.

Loshak’s task is difficult, but not impossible, in the 16-car TA class field; and he will not be the only driver  looking to move up the standings come Saturday.  The battle for the year end championship podium also features rookie Chris Dyson, in the No. 20 Plaid Enterprises/ CD Racing Ford Mustang, David Pintaric, in the No, 57 Kryderacing Cadillac CTS-V, and Amy Ruman, in the No. 23 McNichols Company Chevrolet Corvette.  Dyson, having already clinched TA class Rookie of the Year, enters the weekend in third position, with 225 points to his name--still within striking distance of second position but also within reach of both Pintaric, fourth with 211, and Ruman, fifth with 210.

Ruman’s history at Daytona International Raceway cannot be understated.  Ruman stands the most successful driver in Trans Am history at Daytona International Speedway, with 2014, 2015 and 2016 victories to her credit.  Daytona was the site of her clinching the 2015 and 2016 championships, while her 2014 win marked the first solo victory at Daytona by a woman in a professional automobile race.  If Ruman rekindles her long-standing success at Daytona come Saturday, a last round jump up the championship standings could very much become a reality.

Two wildcards within the TA field are Florida residents RJ Lopez, in the No. 06 Tina Bazuca/ Republica Brewing Chevrolet Corvette, and Shane Lewis, in the No. 69 Derhaag Motorsports Chevrolet Corvette.  Lopez’s 32 career starts have seen him garner four wins and 12 podium appearances, including a second place finish at Daytona in 2017.

Lewis, who has seen the vast majority of his 51 Trans Am starts come in TA2 competition, will make only his second TA class appearance on Saturday, the previous a third place finish at Virginia International Raceway in 2017.  Across Lewis’ career he has captured six Trans Am wins, including one at Daytona in 2016 TA2 competition.

2010 and 2011 Trans Am champion Tony Ave will return to TA class competition this weekend in the No. 4 Cybersight Ransom-Stopper Chevrolet Corvette, making his fist TA class appearance since Brainerd International Raceway in 2017.  Ave stands one of the most successful drivers in Trans Am history, with 18 wins, 34 podiums and an astonishing 32 poles across 97 starts.

Two more Trans Am champions will be in attendance:  2009 champ Tomy Drissi, of Burtin Racing in the No. 8 The Grinch Chevrolet Camaro, and 2012 champion Simon Gregg, in the No. 59 Derhaag Motorsports Chevrolet Corvette.

Battling for the TA class Southern Cup Honors will be Florida’s Jeff Hinkle, in the No. 91 Technical Realty Group of Texas/ Netdepot Dodge Challenger, and Larry Hoopaugh, in the No. 53 Hoopaugh Grading Chevrolet Corvette, with the two separated by 23 points, to Hinkle’s favor, entering the round. 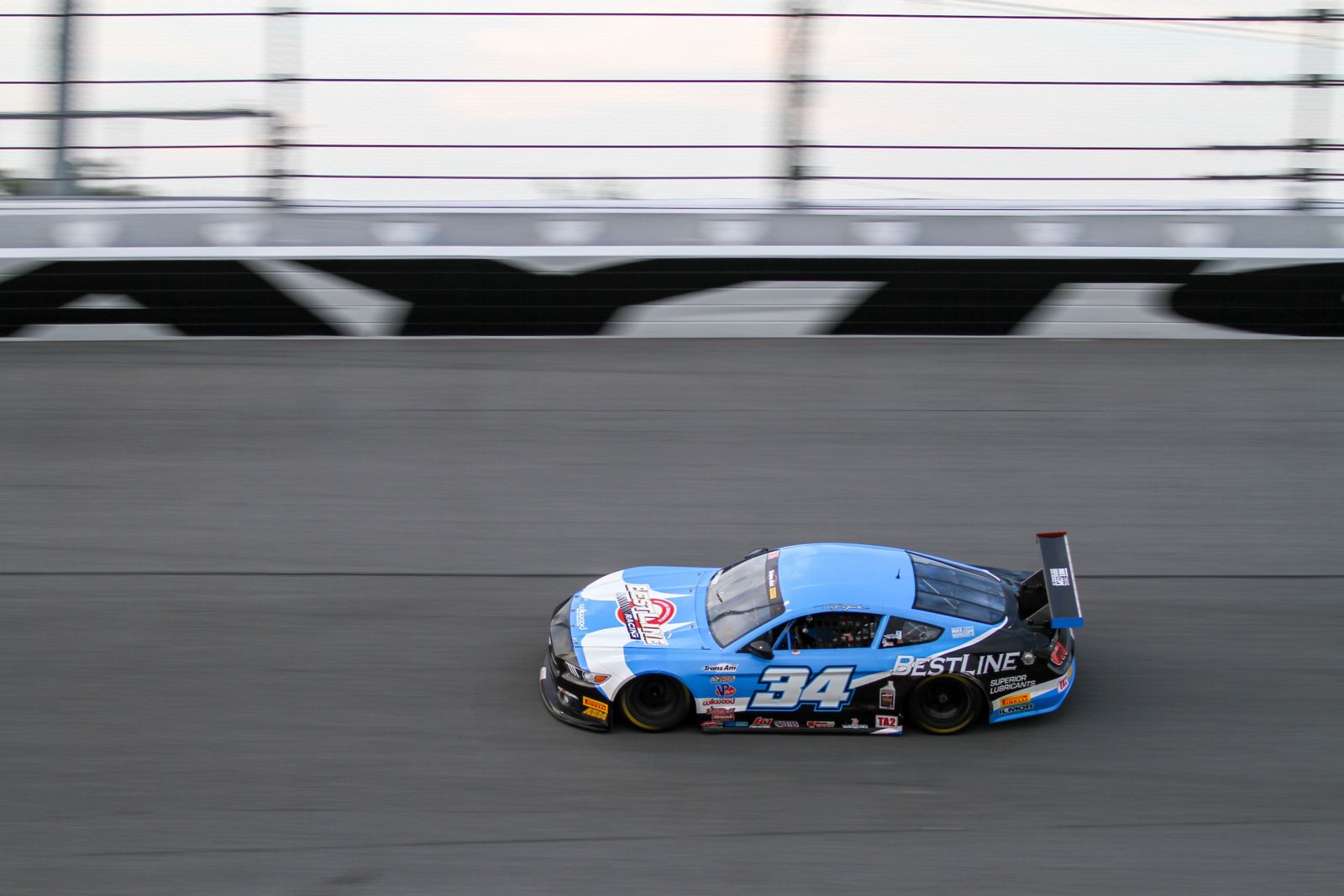 Trans Am’s TA2 class will feature a 22-car entry— one more opportunity for teams and drivers alike to capture Trans Am silverware in the Muscle Car Challenge— only with the twist of a multi-class competition; as TA2 races alongside TA, TA3 and TA4, the only contest of its kind in the Trans Am Championship.

The top two spots in the point standings belong to champion Rafa Matos, in the No. 88 3-Dimensional Services Group Chevrolet Camaro, and Tony Buffomante, 2016 champion and driver of the No. 34 Mike Cope Racing Enterprises Ford Mustang, both free to race for the win without consequence.  Last year, Buffomante did just that. capturing pole and the ensuing TA2 victory on the banks of Daytona.

However, below Matos and Buffomante it is a much different story with a mere 13 points separating positions three through six in the championship points.

Entering the round, Rookie of The Year Ethan Wilson, in the No. 49 Western Grinding Dodge Challenger, leads the way with 188 points following a fourth place finish at COTA, his third consecutive top five finish while tying a career best set earlier in the year at Watkins Glen International.

Keith Prociuk, Buffomante’s Mike Cope teammate and driver of the No. 9 HP Tuners Chevrolet Camaro, is only five points behind Wilson, despite missing a round of the contest.   Prociuk leads veteran Tom Sheehan, in the No. 97 LTK Insulation Technologies Chevrolet Camaro, by six points (183 to 176), while Scott Lagasse, Jr., in the No. 95 SLR/ Fields Racing/ M1 Fastrack Chevrolet Camaro, lurks just one point behind Sheehan following a strong second half of the season, including four podium finishes.

Looking for bookend victories in 2018 is Sebring victor Marc Miller, in the No. 12 Berryman/ Prefix Dodge Challenger.   Daytona will be Miller’s fifth appearance of the season, highlighted by his come-from-behind victory over Matos in the season opener.

Misha Goikhberg will return in the No. 25 BC Race Cars Chevrolet Camaro, only days removed from a race-long battle with Gar Robinson at Circuit of The Americas, where he finished second by a mere .064 seconds.  The No. 25 has become a staple of the TA2 podium as of late, with two consecutive second place finishes, Goikhberg’s at COTA and Tony Ave’s at VIR.

Also in attendance will be Matos’ teammate, Doug Peterson, in the No. 87 3-Dimensional Services Group Chevrolet Camaro.  Peterson has a record of success at Daytona, including a 2013 victory in the TA class during the first of his two consecutive TA championship winning seasons.

The TA2 Southern Cup will conclude at Daytona, with Louis-Philippe Montour, in the No. 13 Montour LTD, entering with a 17 point lead over Shane Lewis, who is not entered in the TA2 class this weekend. 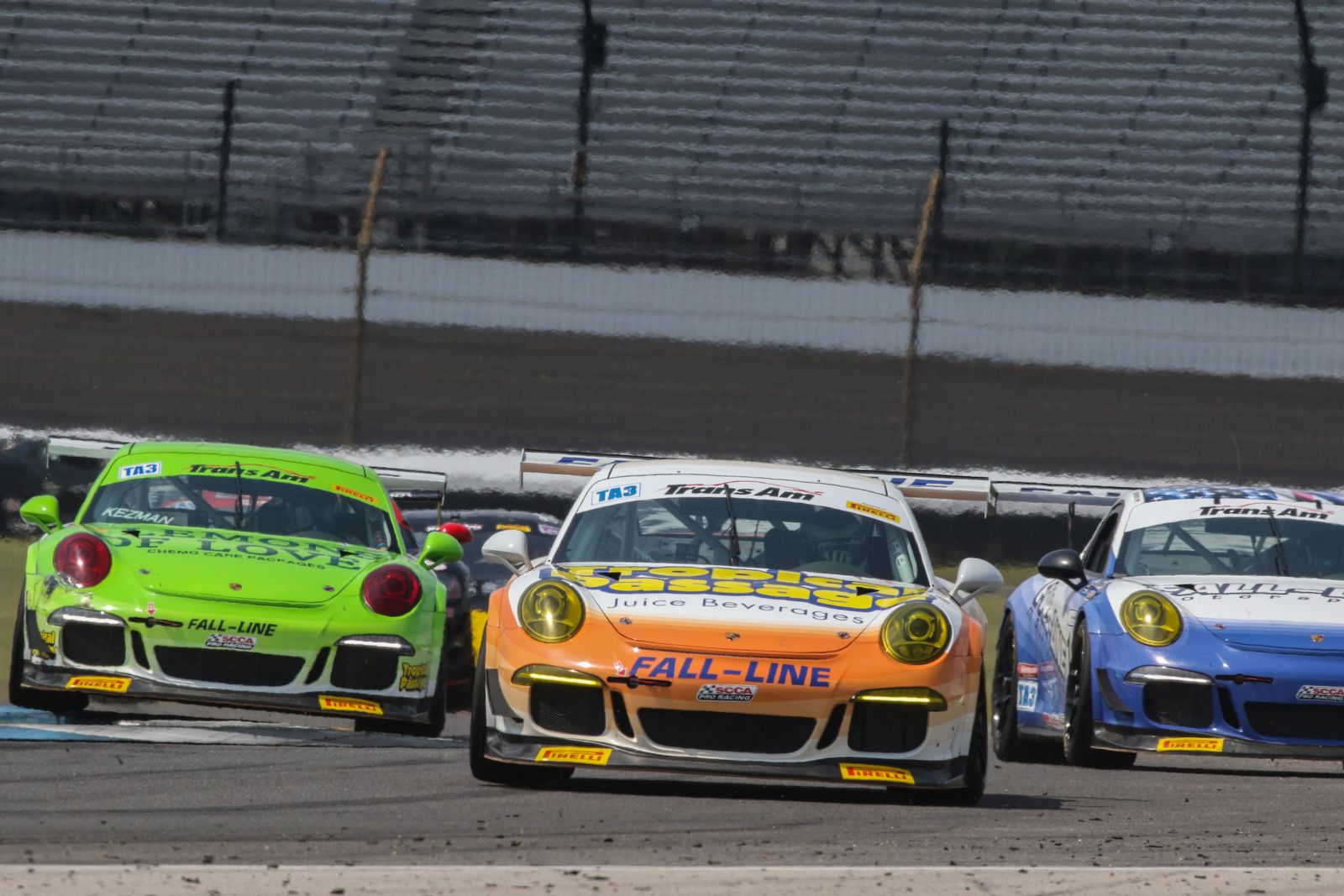 In TA3, Alline Cipriani, and the No. 60 Ginetta USA Ginetta G55, enters Daytona with a nine point lead over defending champion Mark Boden, in the No. 46 Fall-Line Motorsports Porsche 991 GT3, but theirs is not the only battle remaining for the TA3 year-end championship podium.   Boden’s teammate Tom Herb, currently third in the standings and driver of the No. 16 Fall-Line Motorsports Porsche 991 GT3 Cup, stands eight points ahead of Florida’s Dave Ricci, in the No. 71 Florida Roadway Signs Chevrolet Camaro.

2015 TA3 champion Lee Saunders, in the No. 84 Landsearch LLC Dodge Viper, returns to Trans Am competition this weekend as well.  Saunders has qualified on the TA3 pole at Daytona for four consecutive years, resulting in three podium finishes, including a 2016 victory.

Jason Daskalos, in the Vintage Four Twenty-Three Dodge Viper, will make his third appearance of the season this weekend; his prior two resulting in a Road America victory and a COTA podium. 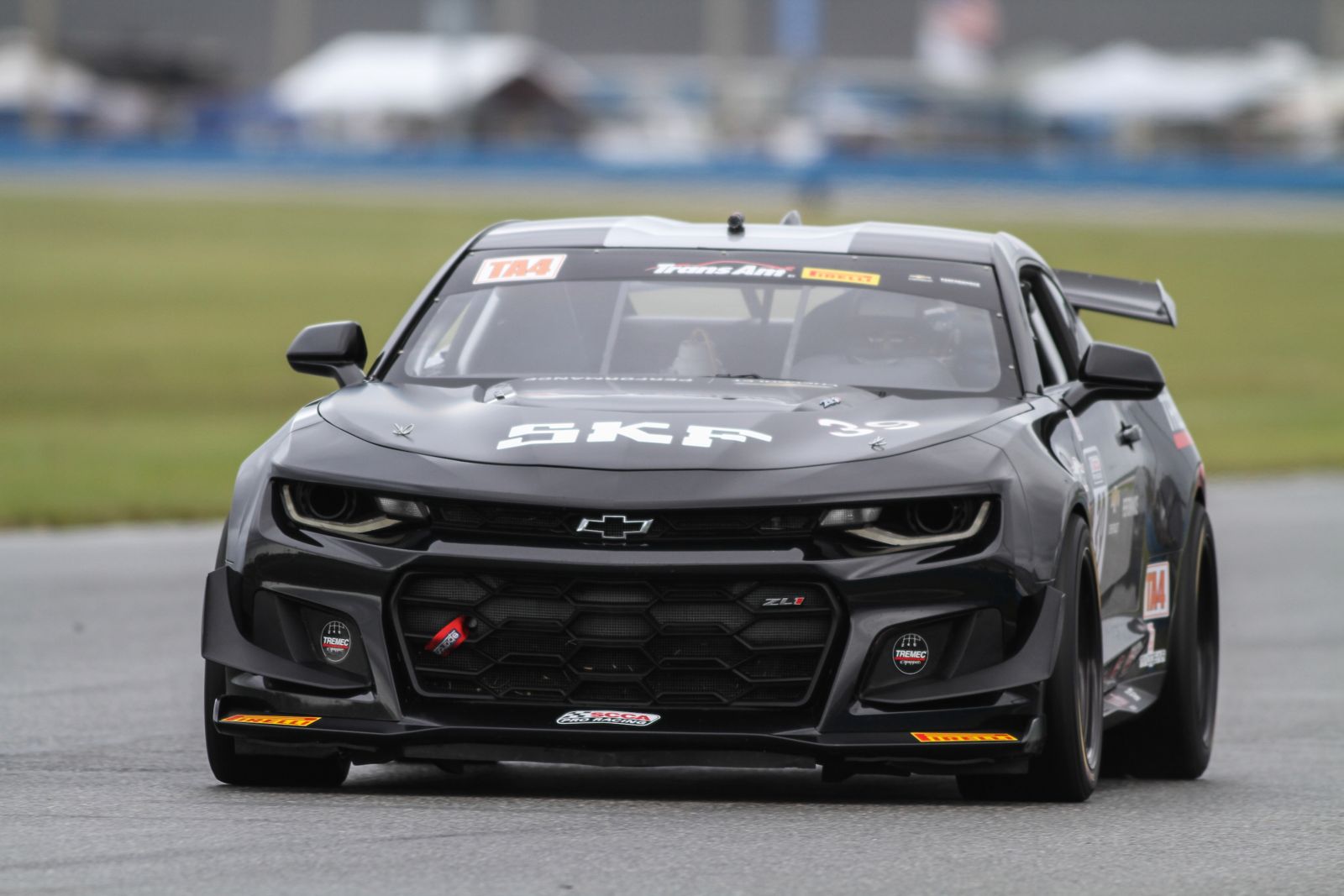