LAKEVILLE, CT (31 May 2021) – What came around, went around for Mike Skeen in Monday’s Trans Am Memorial Day Classic finale at Lime Rock Park. The defending TA2® champion lost the lead to Rafa Matos after an incident with a lapped car early in the 66-lap race, but came back with four laps remaining to score his first Trans Am Series presented by Pirelli victory of the season.

Earlier in the day, Skeen captured the pole with a final-minute run in the No. 1 LiquiMoly/Turn 14 Turn 14 Distribution Center Chevrolet Camaro. Running second for much of the race, he grabbed the lead when Matos had an encounter with a lapped car near the start/finish line.

“It was super-intense,” said Skeen, scoring his eighth-career Trans Am victory. “We got off to great start, a nice and clean battle at the front. I was able to get a little gap in traffic, and then I got caught out in the last corner trying to get by a lapped car. We knocked the toe-in a little bit on that one, so the car was never quite as good after that. I thought we would have to settle for P2 . I started closing the gap there at the end and hoping something would happen in traffic, and it just happened that way. The Stevens-Miller guys gave me an awesome car today, super quick. We came away with our first win of the year, with hopefully many more to come.” 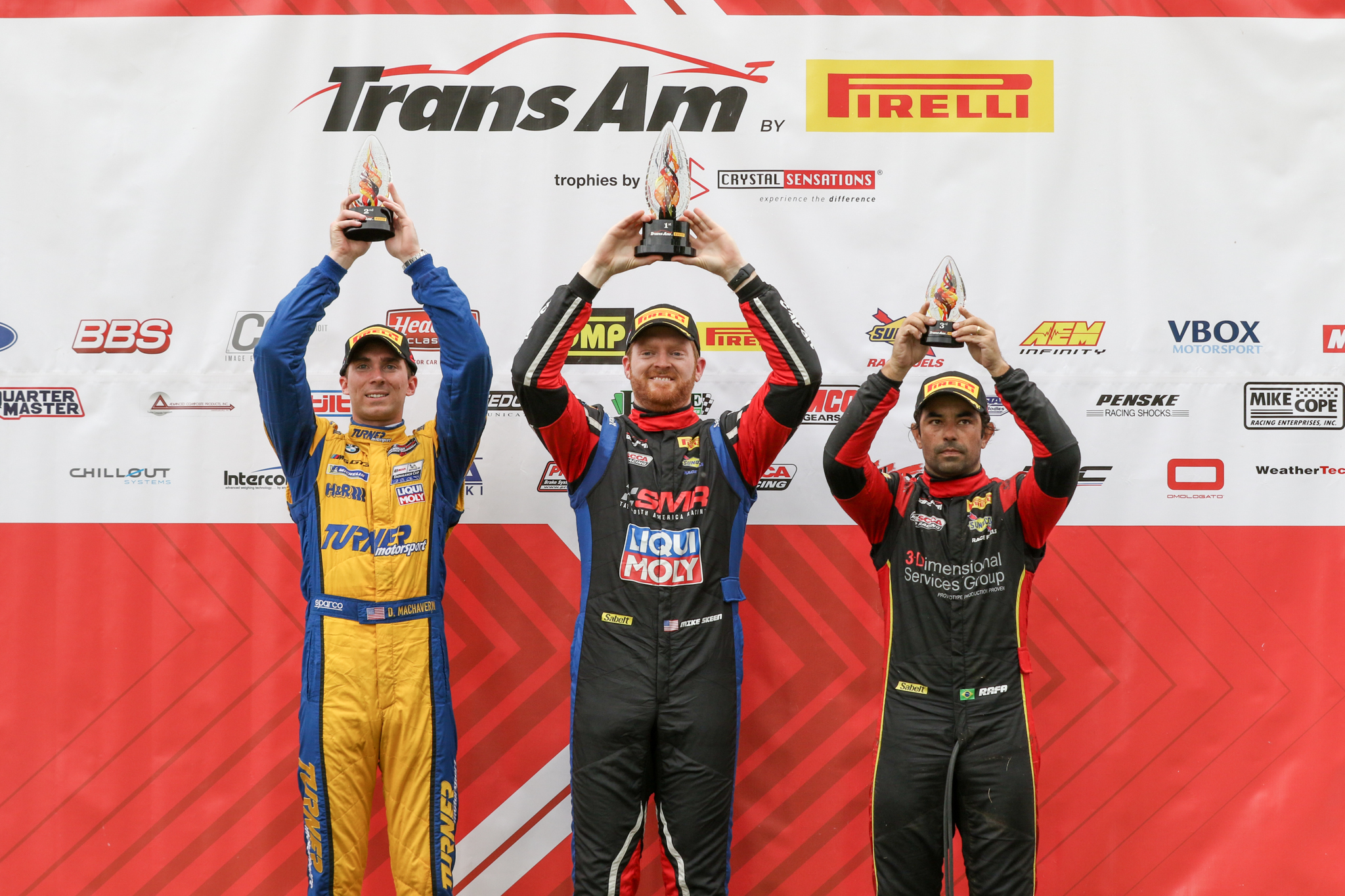 Dillon Machavern also took advantage of Matos’ late misfortune to capture second. He made a late charge in the No. 92 M1 Chevrolet Camaro, but came up 0.857-seconds short at the checkered flag.

Machavern was a late addition to the TeamSLR roster. The 2019 TA2® championship runnerup won his first race earlier on Monday morning with a winning run in SVRA Group 10 action onboard his dad Dave’s 2003 Grand Am GTS winning Ford Mustang built by Tommy Riggins not far from the Lagasse shop in St. Augustine, Florida.

Machavern took the “Chill Out Move of the Race” for his work in traffic.

"I forgot how physical it is to drive these cars compared to the IMSA cars that have traction control and ABS- I'm a little worn out," said Machavern. "It was a really awesome race, the Lagasse guys put a great car under me. I didn't really know what to expect, since we had so much wet, and only one dry session to figure it out. I am just really happy to back in a Trans Am car." 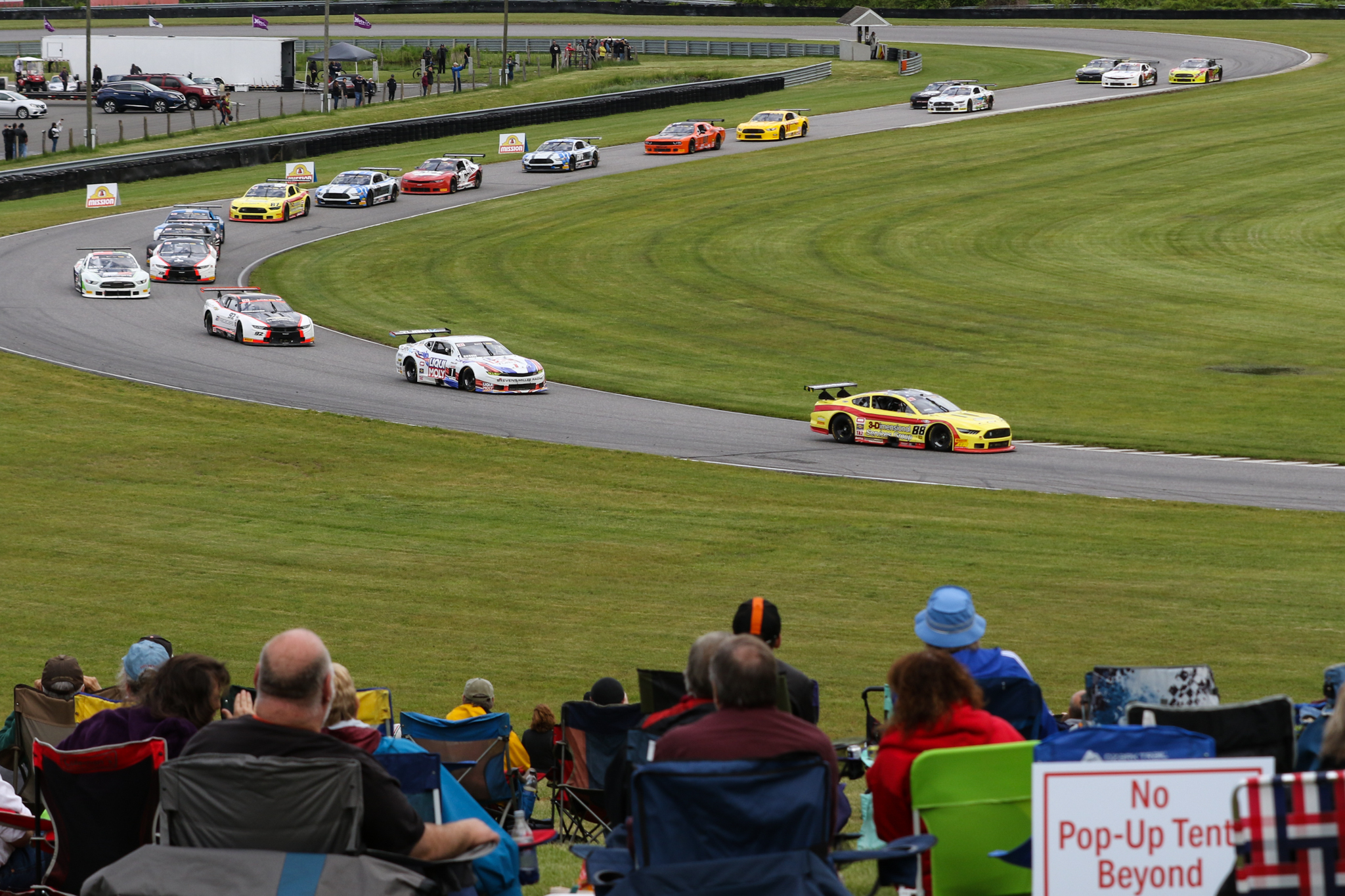 Matos was the heartbreak kid, taking third after coming close to a second-consecutive triumph in the No. 88 3-Dimensional Services Chevrolet Camaro. Matos, the 2018 TA2® champ, took the lead on the 23rd lap when Skeen had contact with a lapped car entering the final turn. Matos was able to pull away on two restarts, but was bumped off on the front straight and lost two positions with less than three minutes remaining.

"Lime Rock is always chock-full of surprises - I love this place," Matos said. "The race was very difficult for me. We had the car set up for short sprints and we were not expecting long runs like we had. On the restart I was able to keep ahead of Mike (Skeen), but unfortunately I got caught up by a lapped car. With two laps to go, he just didn't see me and pushed me into the grass. Overall a good weekend, especially for points. Thanks to everyone who came out. Lime Rock fans are truly amazing."

Connor Mosack gave TeamSLR two cars up front with a fourth-place finish in the No. 28 Nic Tailor/FS Camaro. The 2019 Lime Rock Park race winner Thomas Merrill, who entered the race leading TA2® by three points, took fifth in the No. 81 HP Tuners/Mike Cope Racine Cars Ford Mustang after an up and down race day.

“We were on the back foot all weekend," explained Merrill. "I feel like I didn't put us in the best position in qualifying. We had some ground to make up at the beginning, which forced our hand to make some more aggressive moves early in the race - and it bit us. The HP Tuners car was so good, it was fun to drive through the field, but I wish I didn't have to. Toward the end we ran out of time and tires. I feel like our Cope crew deserved better this weekend, but we were just off from the get go. I am getting far too used to driving from the back to the front. I'd like to have a nice boring race for once, start on pole and win just like we did in 2019." 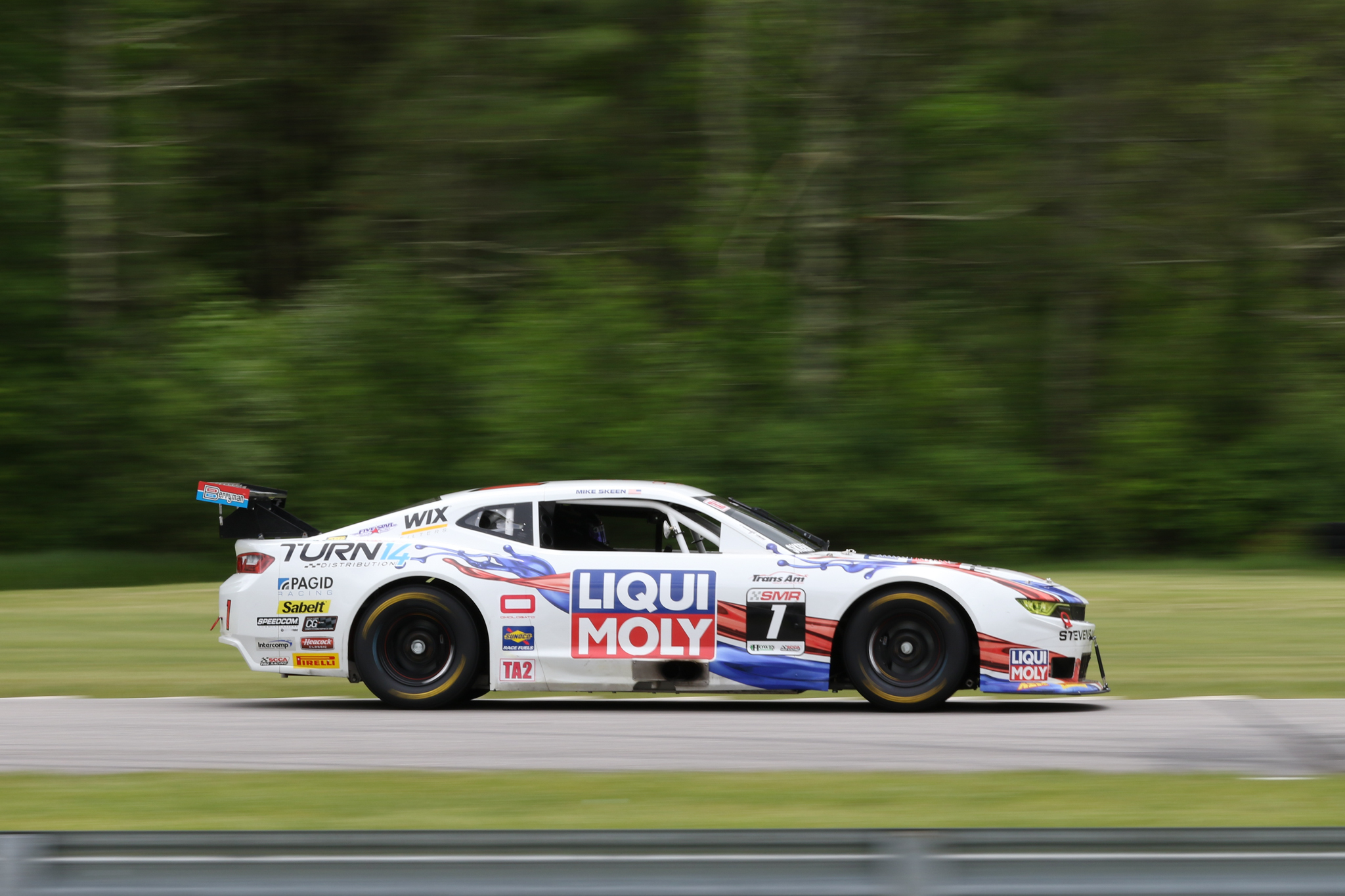 Doug Peterson placed 12th overall and was the Masters winner after missing Saturday practice due to travel difficulties coming from Bora Bora. Adam Andretti was the stand-by driver for the No. 87 3-Dimensonal Services Mustang, looking to win on the same circuit where his uncle Mario Andretti picked up his first road course victory.

"I'm 70 years old and I'm still out here racing with the young guns," said Peterson. "I was spun three times and continued. If this wasn't entertaining today, you're not a race fan."

Round 5 for the 2021 Trans Am Series presented by Pirelli will be at Mid-Ohio Sports Car Course on June 25-27, with a TA2® feature on Saturday and TA/XGT/SGT/GT event on Sunday.

Replay the full race on the Trans Am by Pirelli Racing App: https://gotransam.com/news/Download-the-Trans-Am-by-Pirelli-Racing-App-to-Watch-Live-Events/70250