Grant Family Building a Family Legacy in Trans Am at VIR

ALTON, VIR. (23 September 2021) -Meet the Grant family from Memphis, Tennessee, who have made racing in the Trans Am Series presented by Pirelli a family affair.

Three of the Grants will be competing this weekend at Virginia International Raceway, while several other Grants have made themselves at home at VIR and other tracks across the United States.

Leading the family are brothers Milton and Richard. Milton drives the No. 55 Sentry Self Storage/Fairfield Inn Porsche 991.1 in the SGT class. Richard pilots the No. 30 Grant Racing Corvette in the TA category.

Milton’s son, Carey, drives the No. 6 Grant Racing 2 Porsche 991 GT3 Cup in SGT. All three race at the same time. Richard’s racing for the overall win in TA, while his son competes against his uncle in SGT.

Another of Milton’s sons, Kevin, formerly competed. Richard also has two sons, Keith and David, who race in the IMSA Prototype Challenge. They will be co-driving the No. 40 JDC Motorsports Duqueine D08 when that series races at VIR on Oct. 8-10.

Milton and Richard started a home-building business in 1970. Both of their sons – along with Richard’s daughter – are also in that business. The brothers began their racing careers in Triumphs. Richard moved up to GT1 in 1998, and then raced two Corvettes.

“My brother and I had been doing some autocrossing, and one of his friends invited him to a race,” Milton Grant recalled. “He got so excited, when he came home he built a Triumph GT6. Then I went to watch him race, and then I went out and built a Triumph Spitfire. That’s how we got started.”

Richard made his Trans Am debut back in 1999 at Road Atlanta, placing 32nd in a Camaro. He has 49 career races in the series, including two top-fives, taking fifth in both in the second race of the VIR doubleheader in 2020, and in the opening race at Watkins Glen in 2021, 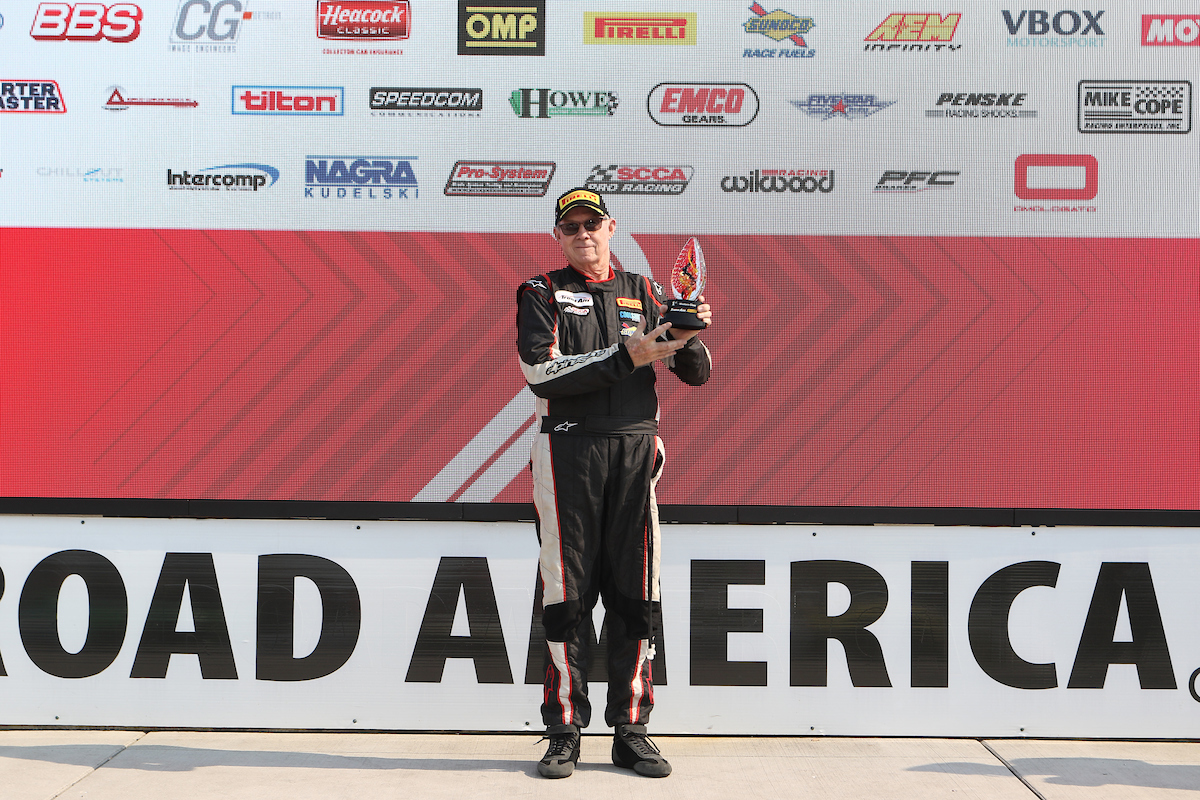 “We’ve been racing a long time,” Richard said. “I’ve been racing for 48 years, mostly in the Southeast at tracks like VIR, Road Atlanta and Sebring. Most of my career has been club racing and Trans Am.”

Milton recorded his 500th racing career start earlier this season at Mid-Ohio while winning the SGT Masters class. Richard isn’t sure how many races he’s accumulated in his career.

“When we started racing, we got a vehicle logbook, and a driver logbook,” Richard said. “When they quit requiring it, I stopped filling mine out, but my brother kept recording his results. That’s how he came up to running in 500 races. But I’ve got probably more than 600, because I’ve been racing a whole lot more the last 15 years, and a lot of my races are in SCCA Majors, which are a two-race weekend.”

Carey made his Trans Am debut at New Orleans in 2015, finishing second in the TA3 International class in a Porsche 997 GT3 owned by his father. He matched that finish twice, at Road America in SGT in 2020 and in the most recent race at Watkins Glen in 2021. Happy with the consistency the team has enjoyed the past few seasons, he is now looking to add a little more speed to get to the top of the podium.

“We’ve run a lot at VIR, and I definitely love the track,” said Carey, who campaigned for VIR-based Synergy for a few seasons. “I almost consider Mid-Ohio my home track because when I started racing I ran in the Run-Offs there so much, but we love VIR, especially the Trans Am races there. I love running in Trans Am. Coming from Grand-Am, we got to like multi-class racing and longer events, as opposed to 30-minute sprint races.

“We also like Trans Am because it doesn’t have pit stops, and you don’t need to bring as many guys to the races. That cuts our costs considerably. Also the length of the races suits our driving styles. I don’t think you can beat the bang for the buck that Trans Am offers.”

Kevin Grant ran selected events in the Grand-Am Rolex Series from 2007 through 2013, running for Synergy Racing, Grand Racing and Turner Motorsport. While he no longer races cars, he competes in Can-Am side-by-side events, although he is preparing a Mazda Miata for a possible return to competition.”

Keith and David Grant are currently tied for fourth in the IMSA PC standings. Stepping up to LMP3 from Formula Atlantic, they opened the campaign with a third-place finish at Daytona, and were fourth at Mid-Ohio. The brothers placed fourth in the standings in 2018, with three podiums. Richard drove their car last year at a test day, but he admits, “I like my Trans Am car better.”

With six family members competing, Milton recalled that at one time the Grants had the highest family entries at the SCCA National Championship Runoffs.

“Now, I think the Aquilantes beat us,” he said. 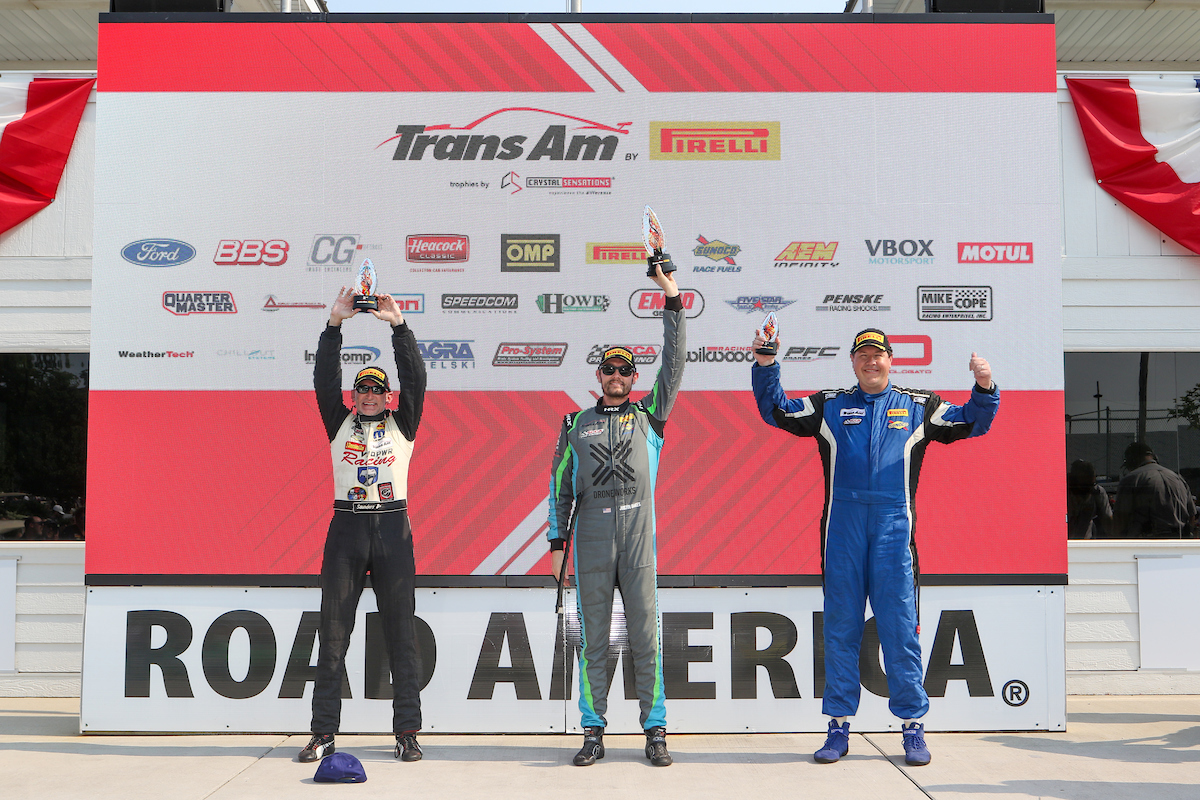 With the season winding down, the Grants are two-three in the SGT driver’s championship, with Carey only five points behind his dad with  VIR and the season finale at Circuit of The Americas remaining.

“He’s knocking on the door,” said Milton, who finished a career-high third in the 2020 standings. “I’m going to see if I can hold him off.”

After enjoying a successful weekend at Watkins Glen the family is ready for even more success this weekend. The team will be staying at the lodge on the property that, in the words of Paul Newman, “If there’s a heaven on Earth, it’s VIR.”

“We looking forward to coming back to VIR, coming off a good weekend at Watkins Glen,” Richard Grant said. “VIR is one of my favorite tracks, and I really like going there. It’s high speed and challenging.”