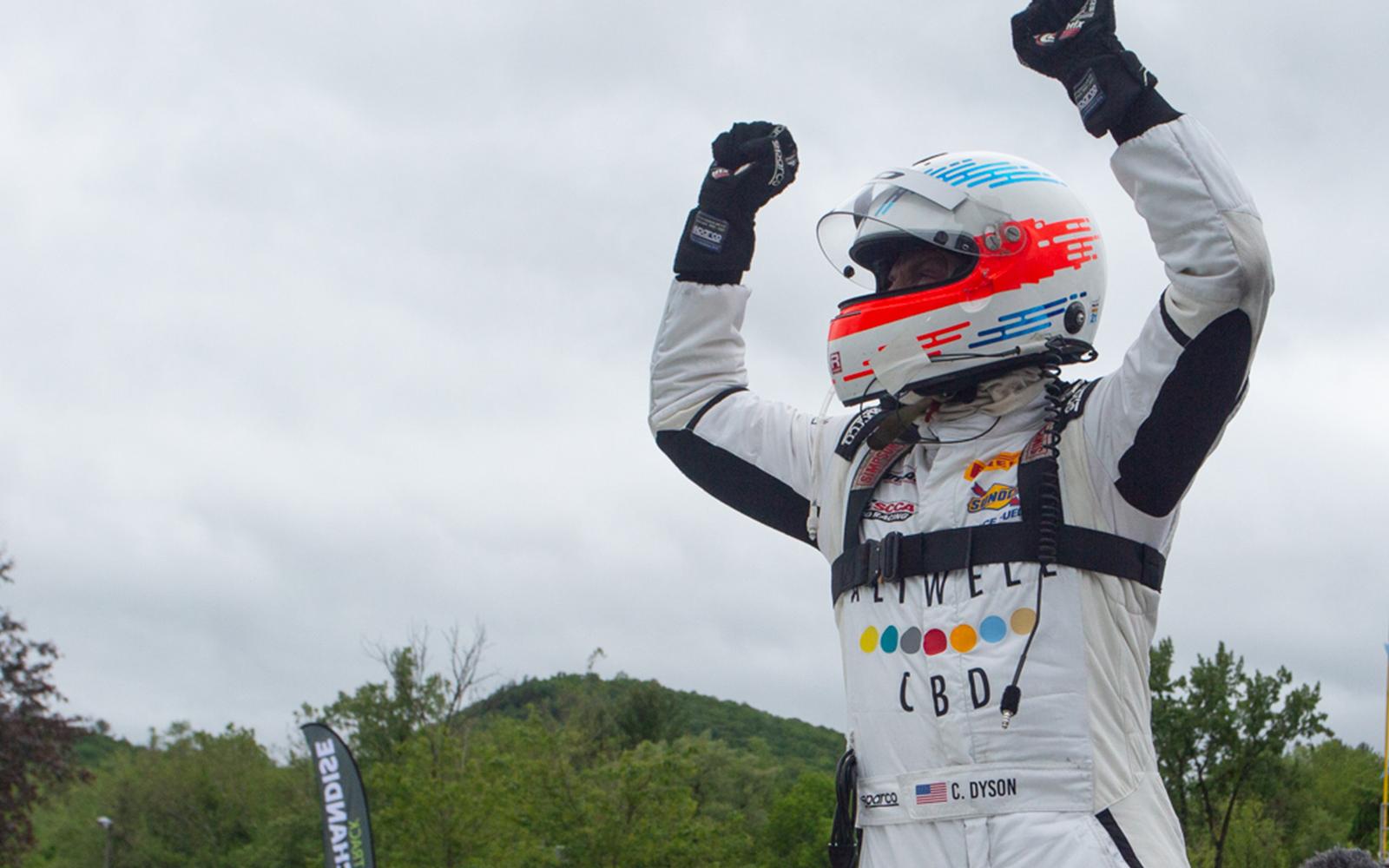 LAKEVILLE, CT (29 May 2021) – Winning at his home track was twice as sweet for Chris Dyson in Saturday’s Trans Am Memorial Day Classic at Lime Rock Park. The resident of nearby Poughkeepsie, N.Y. led every lap for his second Trans Am Series presented by Pirelli victory of the season, while polesitter Ernie Francis Jr., his closest rival for the championship, failed to finish after a mechanical issue.

Dyson led every lap at Lime Rock for the second-consecutive race (he won in 2019), scoring his eighth career victory in the No. 20 ALTWELL CBD Ford Mustang in a race that began in the rain and ended on a drying track.

“This means the world to me,” Dyson said. “The conditions were challenging, but Lime Rock always puts an extra spring in my step, and it’s an unbelievable feat to drive around this place in these Trans Am cars at these speeds and in these conditions, against the caliber of drivers in this field. I’ve been coming here since I was a kid, it’s always been special to be part of this tradition. What a day for the team – what a points day too! I think we’re just hitting our stride.” 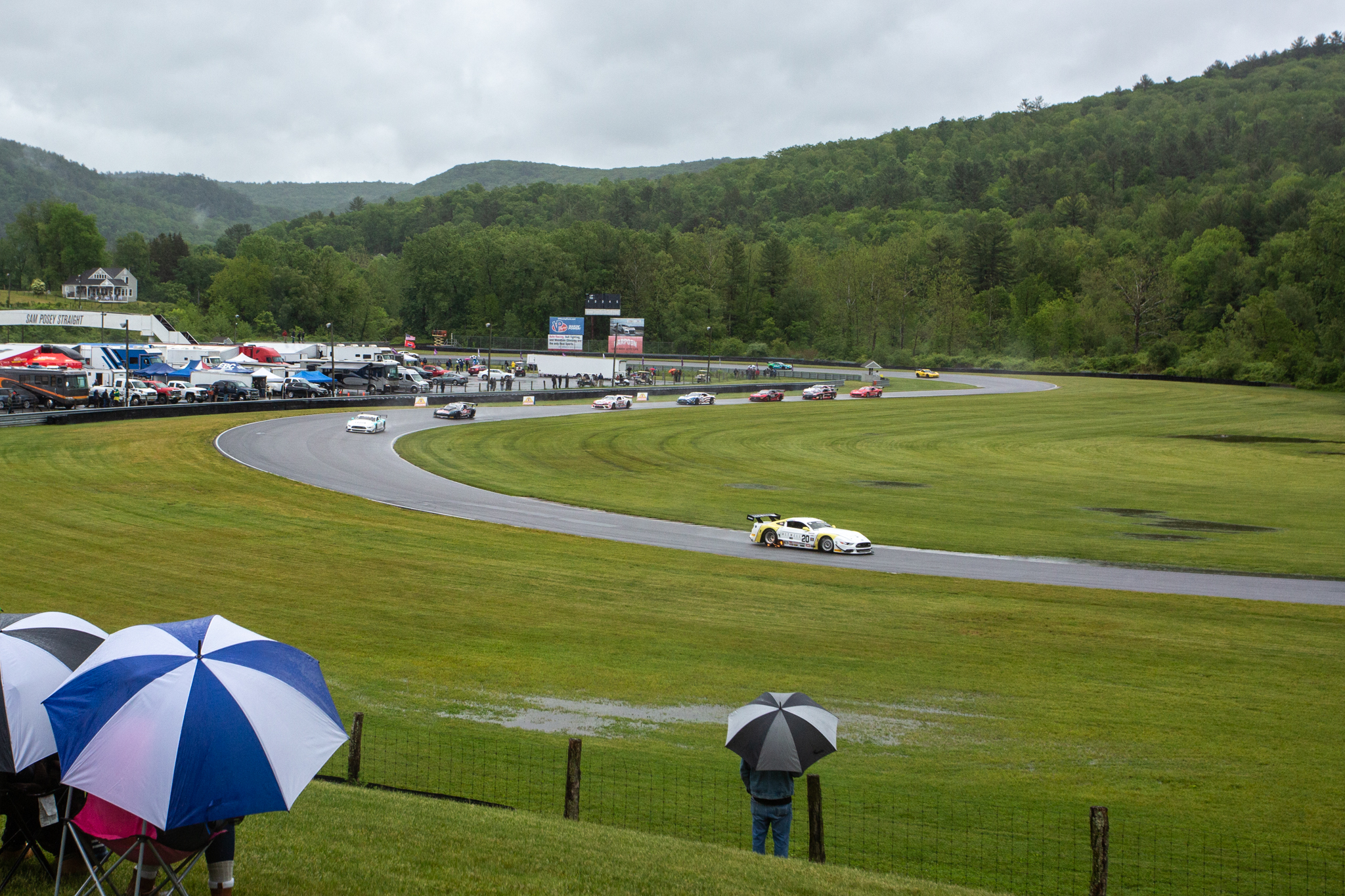 Francis Jr. entered the race with a slim lead in the standings in the No. 98 Future Star Racing Ford Mustang, and won the Motul Pole Award in Friday’s rainy qualifying.

The race began with rain pouring down the front straight. Using a move that he learned from legendary Dyson Racing driver Butch Leitzinger, Dyson went to the outside in Turn 1 on the opening lap to take the lead. Francis did a 360-spin on the wet track and continued, although in eighth place.

“I’ve had that move in my pocket,” said Dyson. “I watched Butch Leitzinger use that move so many times here, and I’ve been waiting years to use it.”

Francis recovered quickly and worked his way up to third, setting his sights on Dyson’s teammate, second-place Andy Lally in the No. 21 Amamos LaVida Tequilla Mustang. Francis finally got by Lally entering No-Name Straight on Lap 28. Lally dove to the inside to regain the position entering the final turn, with Francis coming to a rapid stop shortly thereafter before pulling off in Turn 1 with mechanical issues. 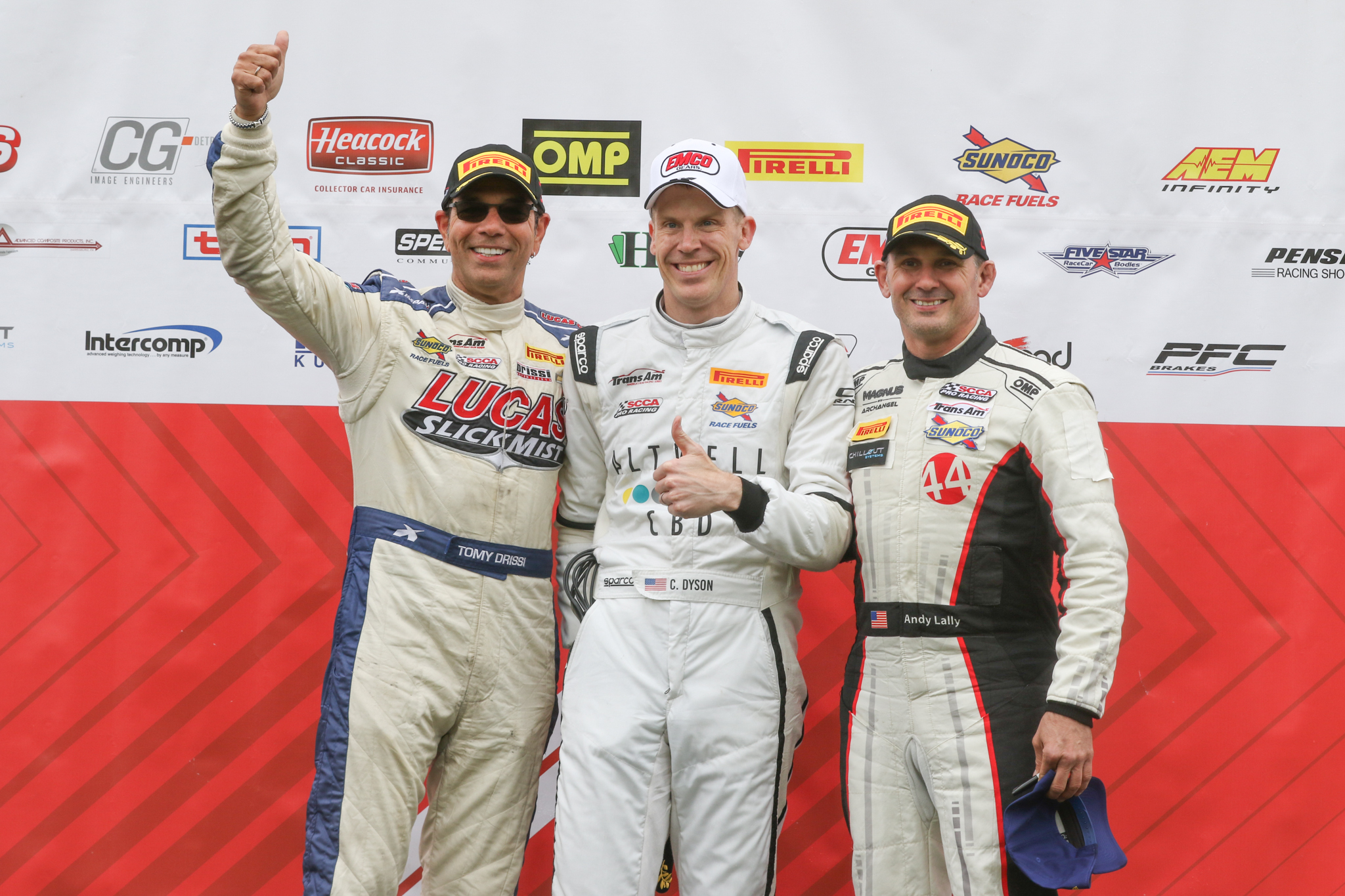 “It’s been a very unlucky weekend for us, we’ve been kind of struggling all season, we are trying to shake it off and get back on track,” said Francis Jr. “I had a spin at the start, I pinched it down a bit tight, and spun off Chris’ (Dyson) car. I got back going and was moving through the field pretty quick. I thought we had a car to fight for the win if we had a caution. I came down the hill and lost oil pressure, and had to pull it off to save the motor. It’s really disappointing we couldn’t get the finish we wanted for our sponsors, but we will come back next time and do better.”

With Francis gone, Dyson’s biggest threat was the weather as the rain let off and the track began to dry over the final 25 laps. Ken Thwaits hit the tire barrier at the end of the front straight on Lap 5 in the No. 5 Franklin Road Apparel Camaro to bring out the first caution. Thwaits was able to continue after being extricated.

Racing resumed on Lap 55 with less than eight minutes remaining on the drying but slippery circuit. Tomy Drissi passed Lally for second with seven laps remaining. Drissi fended off Lally down to the stripe, only 0.315-seconds separated the pair at the checkered, as Drissi took second in the No. 8 Lucas Oil Chevrolet Camaro. Drissi’s clean defense earned him the ChillOut Moment of the Race. 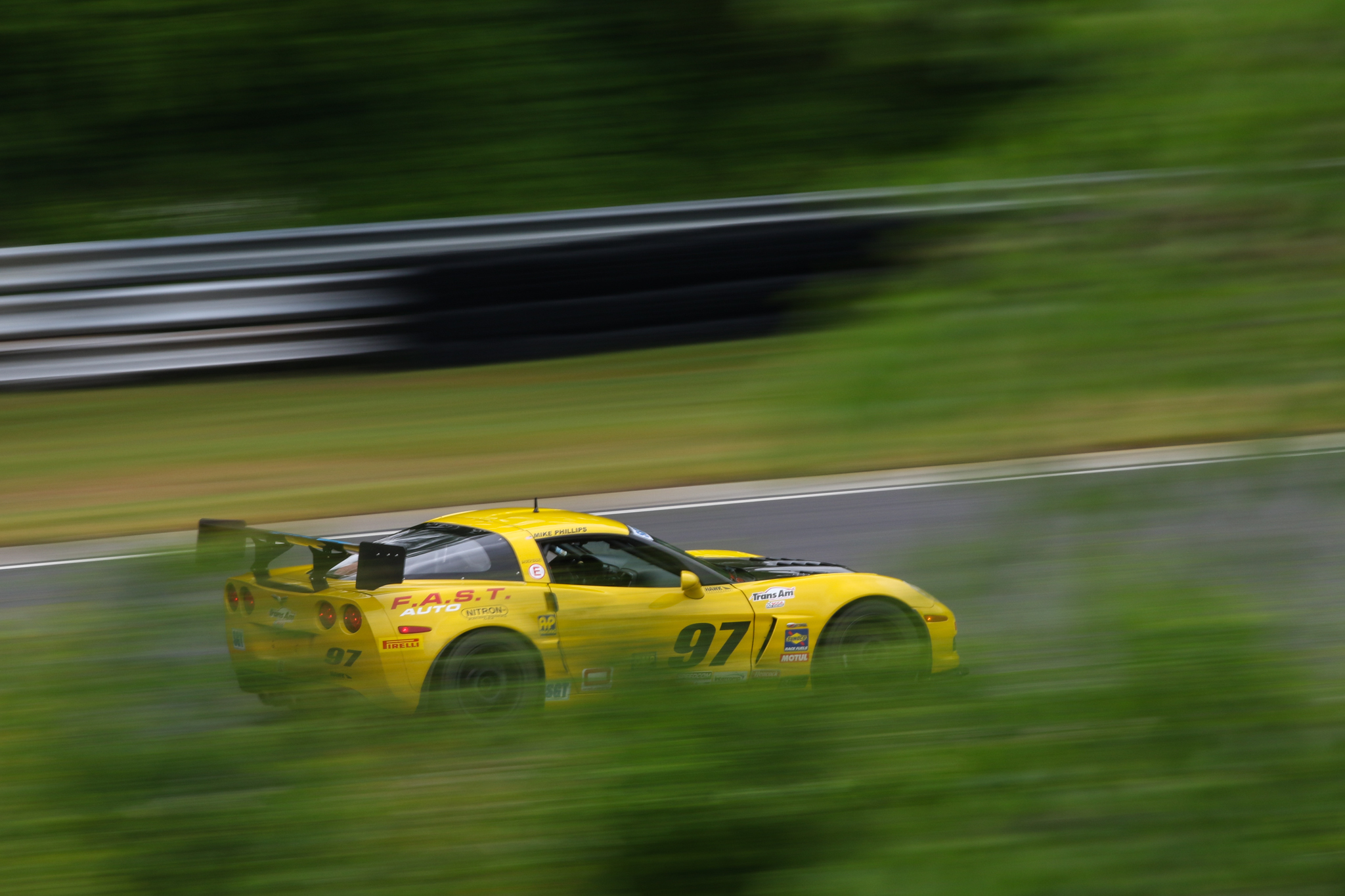 “I learned a lot today over the last few laps,” said Drissi. “My tires came in right away [after the restart] and I got by Lally and I was catching Dyson. I’m feeling really good, but all of a sudden I see Dyson pick it up and Lally’s right behind me. I learned a lot. Lally was very nice to me,”

Lally was a late replacement for Humaid Masood in the No. 21 Mustang, with the sports car veteran winning his lone prior Trans Am start at Watkins Glen in 2017.

“It was fun,” Lally said. “With a drying track like that in these cars sliding around, to do battle with guys like Chris and Tomy was pretty crazy. We had a couple runs, but Tomy was smart with his lines on that last lap. We were side-by-side in West Bend, and we picked up a lapped guy. Tomy used him as a pick, and that was that. Trans Am’s a fun group, especially with this horsepower in mixed conditions like today.”

Three-time Lime Rock winner Paul Fix II, running his first race in two seasons, placed fourth in the No. 4 StopFlex.com/Car Coach Corvette. He was followed by Simon Gregg in the No. 59 The Peter Gregg Foundation Camaro, and David Pintaric in the No. 57 Kryderacing Ford Mustang. 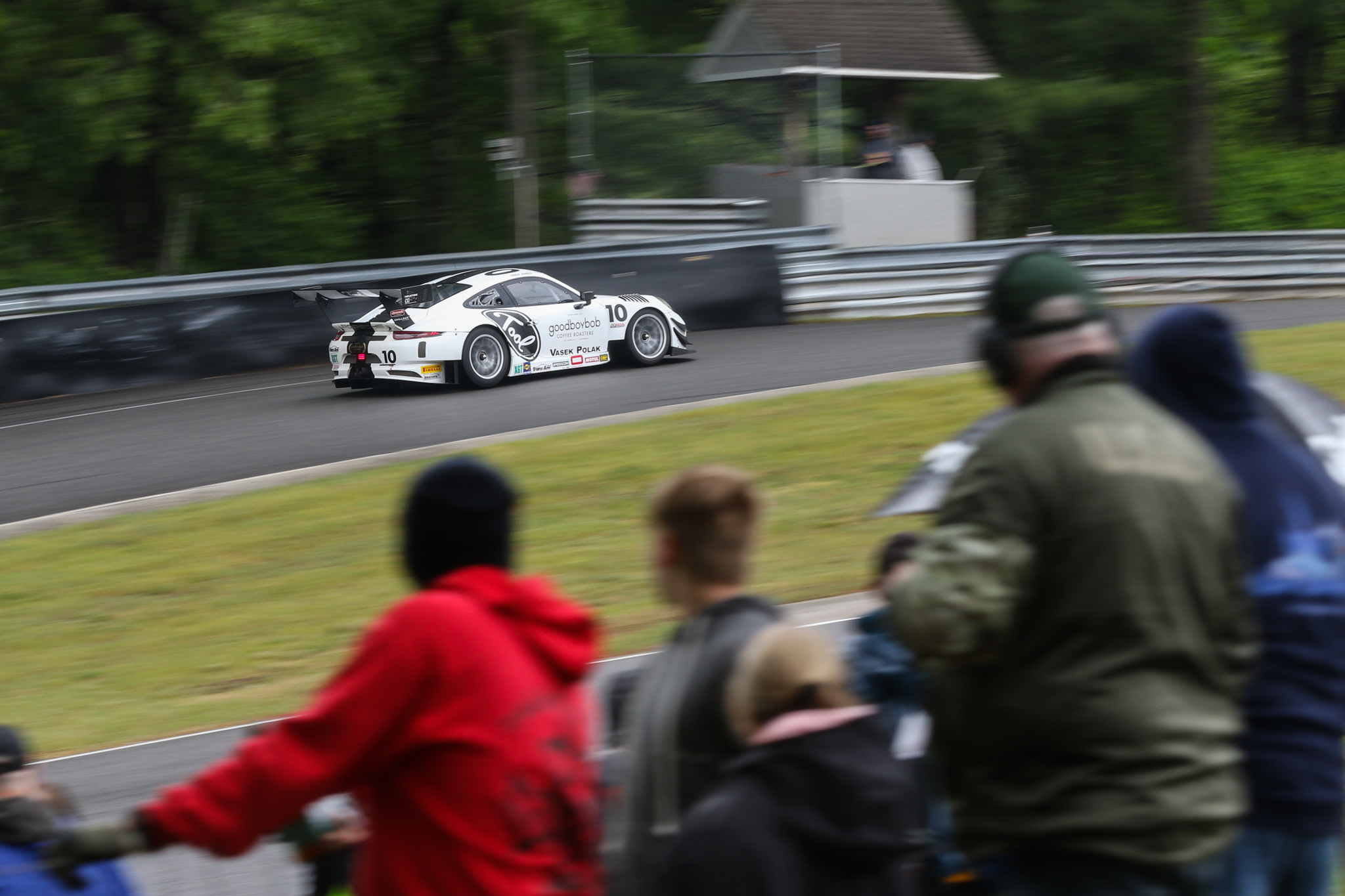 Kerry Hitt, who finished seventh in the Advanced Composite Products Cadillac CTS-V, had his first Lime Rock race against Paul Newman in a Datsun 510. Hitt took the win in the TA Masters Class.

Michael Phillips led all the way to claim his first victory in SGT, driving the New York City-based No. 97 F.A.S.T. Auto Racing Corvette.

“It was really busy out there,” Phillips said. “I saw Justin Oakes roll the dice and start out on dries, so I knew I had to get out and stay out. Then I saw my 47-second gap evaporate because of the yellow, but that’s racing. I was geared up for battle with Justin at the end, but I didn’t know what happened to him.”

Jason Berkeley – the lone Pro-Am competitor in the field – finished second in the No. 67 Falls Village Inn Corvette. Gambling by running slick tires, two-time 2021 SGT winner Justin Oakes dropped out in the closing minutes while running second with electrical problems in the No. 11 Droneworks Corvette.

Erich Joiner led all the way in XGT in the No. 10 Good Boy Bob Coffee Roasters Porsche 991 GT3-R, finishing ninth overall. It was his second-consecutive and fifth career victory in the category. 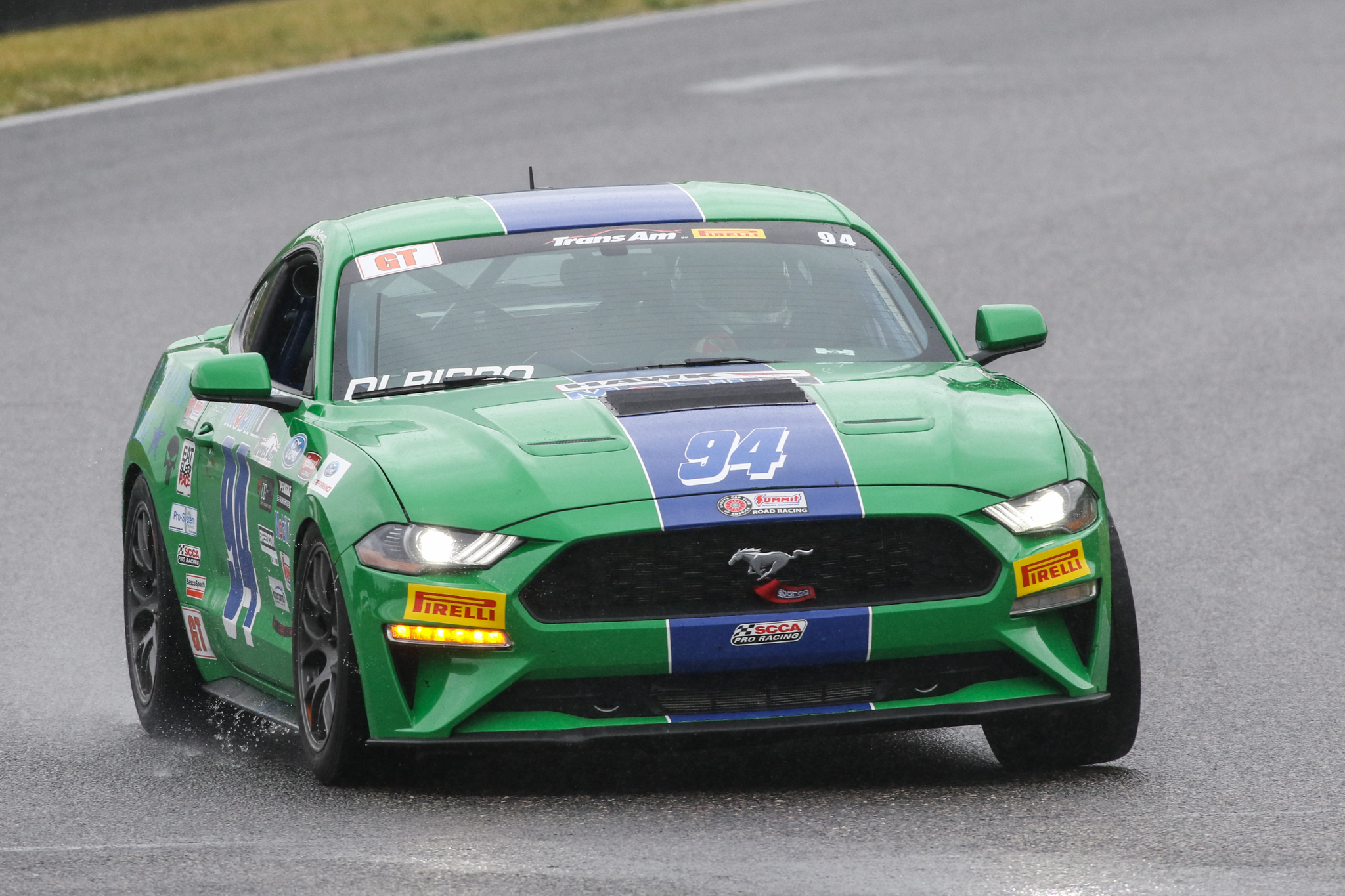 Philip Di Pippo took the GT victory but failed to finish, completing enough laps in the No. 94 Saasco Sports Ford Mustang for his second victory of the season.

The TA2® class will be in the spotlight when the Trans Am Memorial Day Classic concludes on Monday. Qualifying begins at 9:05 a.m. (all times ET) with the 68-lap race taking the green flag at 1:30 p.m.

The full race will be live streamed on the Trans Am by Pirelli Racing App: https://gotransam.com/news/Download-the-Trans-Am-by-Pirelli-Racing-App-to-Watch-Live-Events/70250