SONOMA, CALIF. (25 April 2021)- Chris Dyson left fans stunned on Sunday during the Trans Am Series Presented by Pirelli West Coast race at Sonoma Raceway after the New York native drove from the back to the front of the 29-car field twice to claim his first West Coast victory. Three different class cars led during the 100-mile race, but it was Dyson in the 850-horsepower TA car who claimed the checkered.

As the drivers took the start command, high winds and hard rain started to fall. Race control called for two reconnaissance laps instead of the typical single circuit for drivers to examine the changing track conditions. After the first lap, pole-sitter Dyson pulled into the pits to switch from Pirelli slicks to wets, forfeiting his first-place start.

Dyson took the green in last place and managed to work his way through the field to eighth before the first full course caution emerged about 10 minutes into the race. With the rain fading, Dyson returned to the pits for another tire switch, returning in 19th place.

Another full course yellow mid-way through the race allowed Dyson to play catch up. With his Pirelli slicks getting up to temperature, Dyson’s average speed was about five seconds a lap faster than the leader’s, which allowed him to advance three positions in each lap until he took the overall lead on Lap 25 from XGT driver Simon Gregg.

“What a special day,” Dyson said. “Sonoma has always meant a lot to me. My dad won one of his biggest IMSA races here in 1986. I grew up watching the race broadcast and even memorized the commentary. I always come out here with a little spring in my step. I fell in love with the place the first time I drove here, and this is my first time out here in the Trans Am car. To come out here and win in honor of the Pickett family is such a special day for us.” 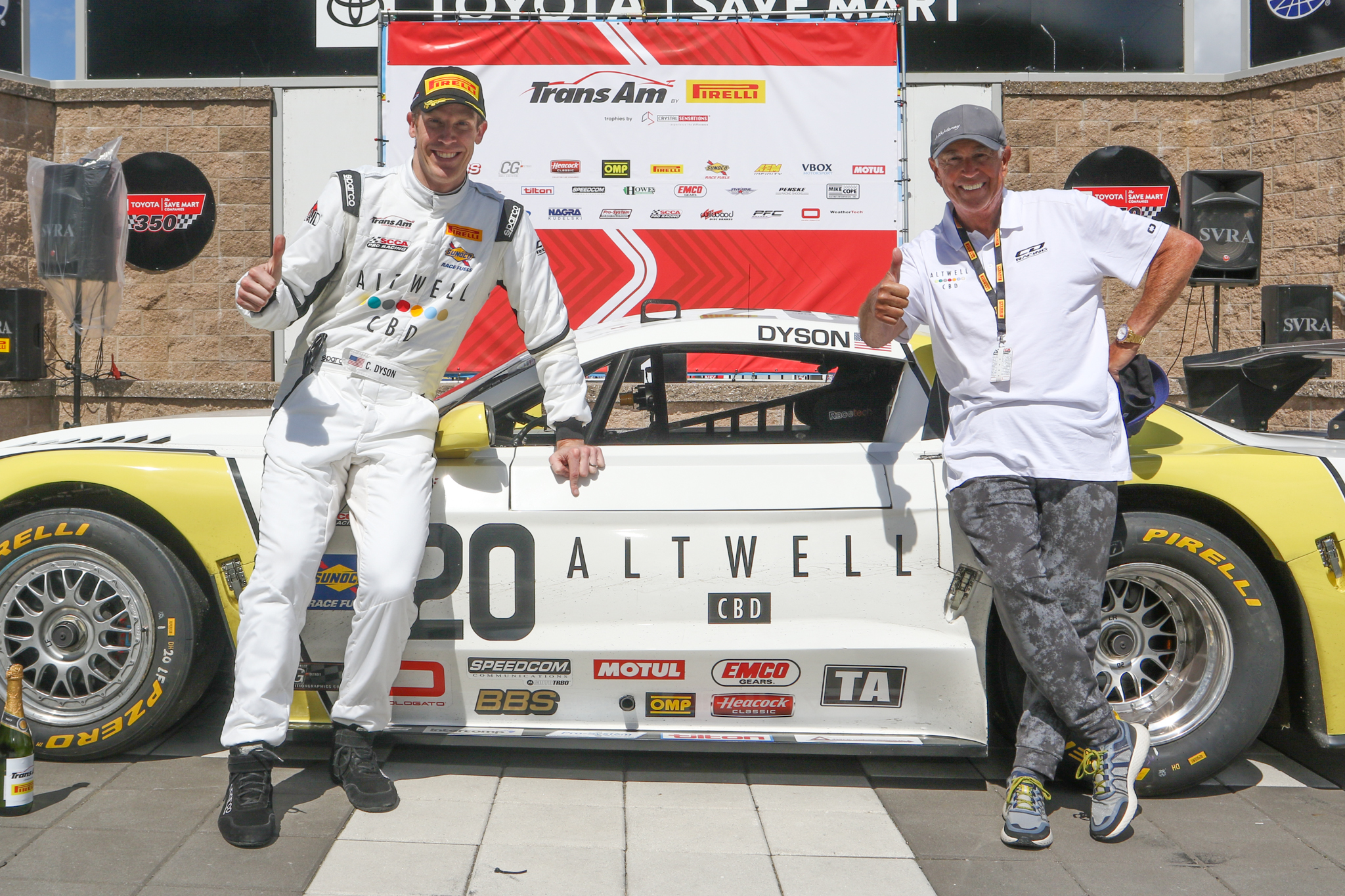 Dyson represented West Coast Trans Am Champion Greg Pickett in a collaboration with Pickett’s newest business venture Altwell CBD, giving Dyson’s No. 20 Ford Mustang a makeover from his traditional red and white Plaid livery to a yellow and white scheme for his West Coast tour. Dyson broke Pickett’s Sonoma Trans Am lap record during qualifying on Saturday, beating the standing time by more than two seconds.

Pickett met Dyson in the winners’ circle to celebrate the victory.

“Chris and I go way back, we’ve been competitors for a number of years and I spent a bit of time racing his father (Rob Dyson) in prototypes,” Gregg explained. “He’s been a dear friend of mine for a lot of years. I respect him as a person, a competitor and a father, and if anyone was to break my track record here at Sonoma, I am glad it was a Dyson.”

Gregg finished third overall in the No. 59 The Peter Gregg Foundation Mercedez Benz AMG, and first in the XGT class. Gregg lost the lead on the opening lap to TA2 driver Sam Mayer before repaying the favor the following lap. The reigning West Coast XGT champion controlled the race until Dyson made a pass on his outside in Turn 1 on Lap 25 and then dropped to third after Dyson’s teammate Masaood edged himself into second 10 laps later. 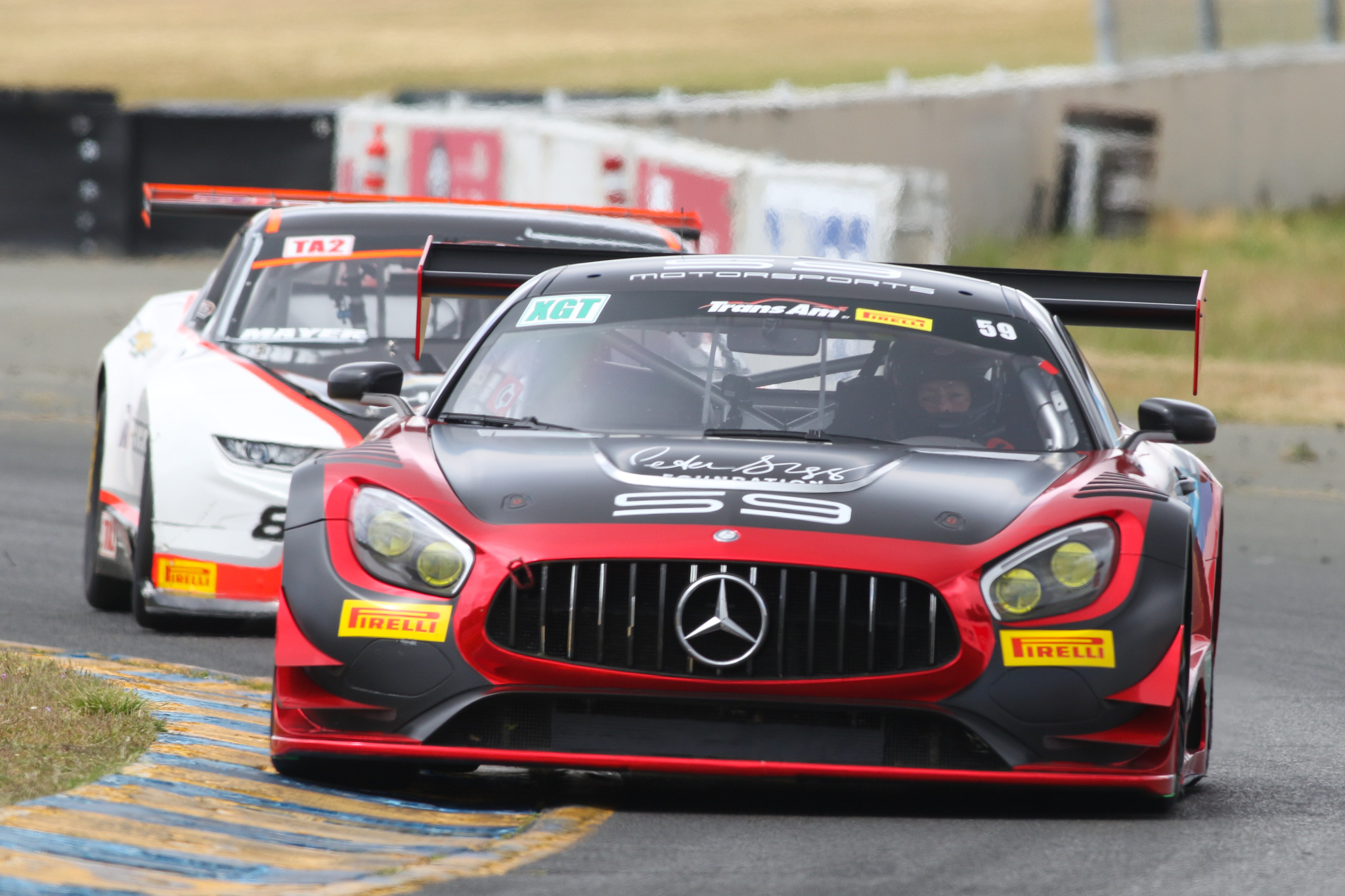 Gregg will trade in his XGT Mercedes AMG for his Chevrolet Camaro next weekend at WeatherTech Raceway Laguna Seca to earn points for his National TA championship bid.

“It felt great to get back into the Mercedes, I haven’t done an XGT race in awhile,” Gregg said. “It was a lot of fun dicing it up with the different classes and I even got to lead a bit. The car handles really well in the rain since it has good electronics. I am so happy to have finished on the podium today.”

XGT driver Erich Joiner was the only other driver to change tires before taking a green after his No. 10 Good Boy Bob Coffee Roaster Porsche 991 GT3 R did a pirouette through standing water on the out lap. Joiner later pitted for slicks and returned to the race to take second in class and 22nd overall.

TeamSLR dominated the huge TA2® class at Sonoma with young aces Mayer and Connor Mosack. Trans Am ProAm Challenge driver Mayer finished first in class and fourth overall in the No. 8 M1-SLR/Fields Chevrolet Camaro. Mayer gained the lead early but started to fade late in the race after his power steering failed. Mayer muscled through the mechanical issues and as soon as he took the checkered his car started to smoke and required a tow to victory circle. The class victory marked Mayer’s second win of the season. 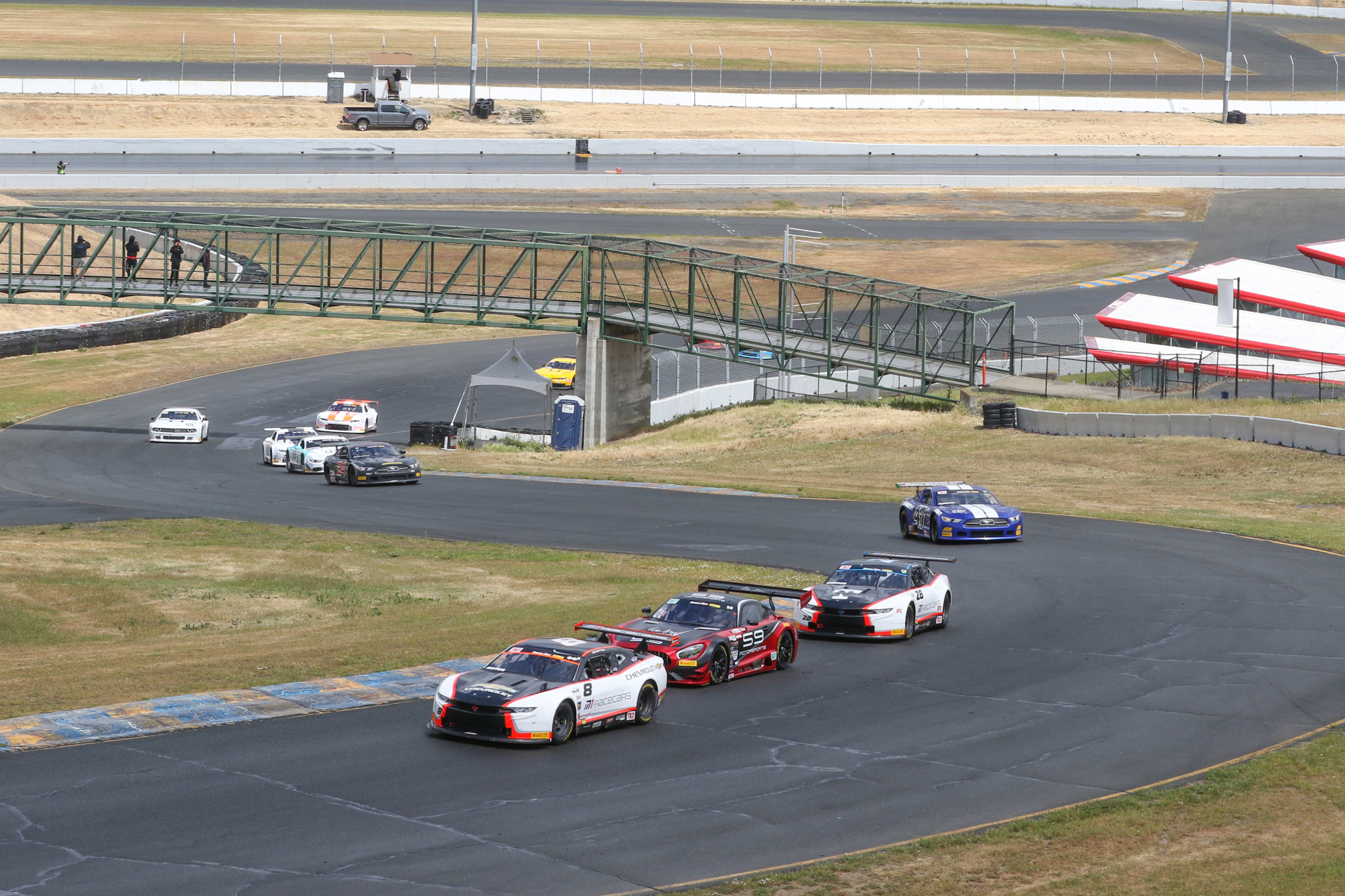 “The XGT and the TA2® cars were pretty even here today at Sonoma, so it was a lot of fun to race with them,” said Mayer. “For our race in general it was pretty hectic because the weather went from one side of the rainbow to the other. I wish the rain would have stayed a little more because on those slick tires and the elevation changes it made the race really fun. Overall it was super fun and I really fell in love this track.”

Mosack started from the second row in fourth in the No. 28 NicTailor/IFS M1-SLR/Fields Chevrolet Camaro. The TA2® rookie crossed the line fifth overall and second in class.

The 2020 SGT champion Carl Rydquist debuted this weekend in TA2®. It was a promising weekend, as he finished third in class and sixth overall in his opening weekend behind the wheel of the No. 47 Racecars4Rent/GroupWholesale Ford Mustang.

Rydquist was also first in class for the TA2 Trans Am West Coast Championship, receiving the full 35 championship points and leaving the weekend with the points lead.

The wet conditions initially favored the Porsches, as SGT class pole winner Rob Crocker in the No. 77 KRYPTAURI Cybersecurity Porsche Cayman led the class early before managing a mechanical issue throughout the 45-lap race. Missing fourth gear and even pulling into the pits briefly after losing power, Crocker still managed to wheel the Porsche Cayman to the finish line, passing his teammate Gene Sigal for first in class and 16th overall. 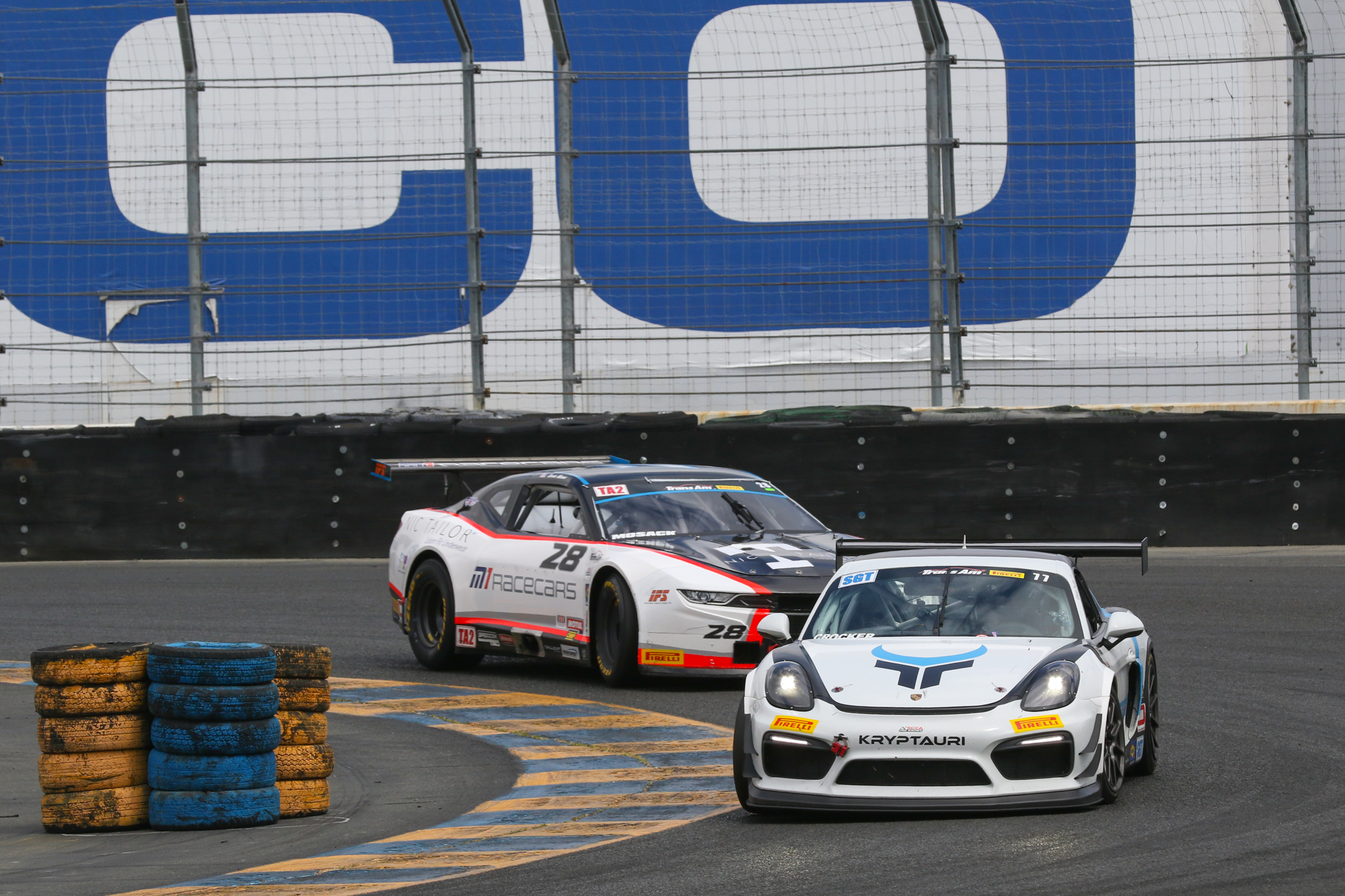 In his second race with Trans Am, John Schweitzer completed the SGT podium in the No. 00 Superior Builders Inc Holden Commodore, which was built in Australia in 2000 by Chevrolet to show off the LS1 and shipped to the United States before Schewitzer took possession of the unique car.

“I had to skip from third to fifth gear most of the race,” said Crocker. “It was tricky but we made it last to finish our first race strong and take an early points lead in the championship.”

The Trans Am West Coast drivers will have a quick turnaround as they travel down the Golden Coast to join the National Trans Am drivers for the Trans Am Speed Fest at WeatherTech Raceway Laguna Seca April 30-May 2. The race will be live streamed exclusively on the Trans Am by Pirelli Racing App. Download and subscribe here: https://nagrasports.app.link/lIQjdAuxq7