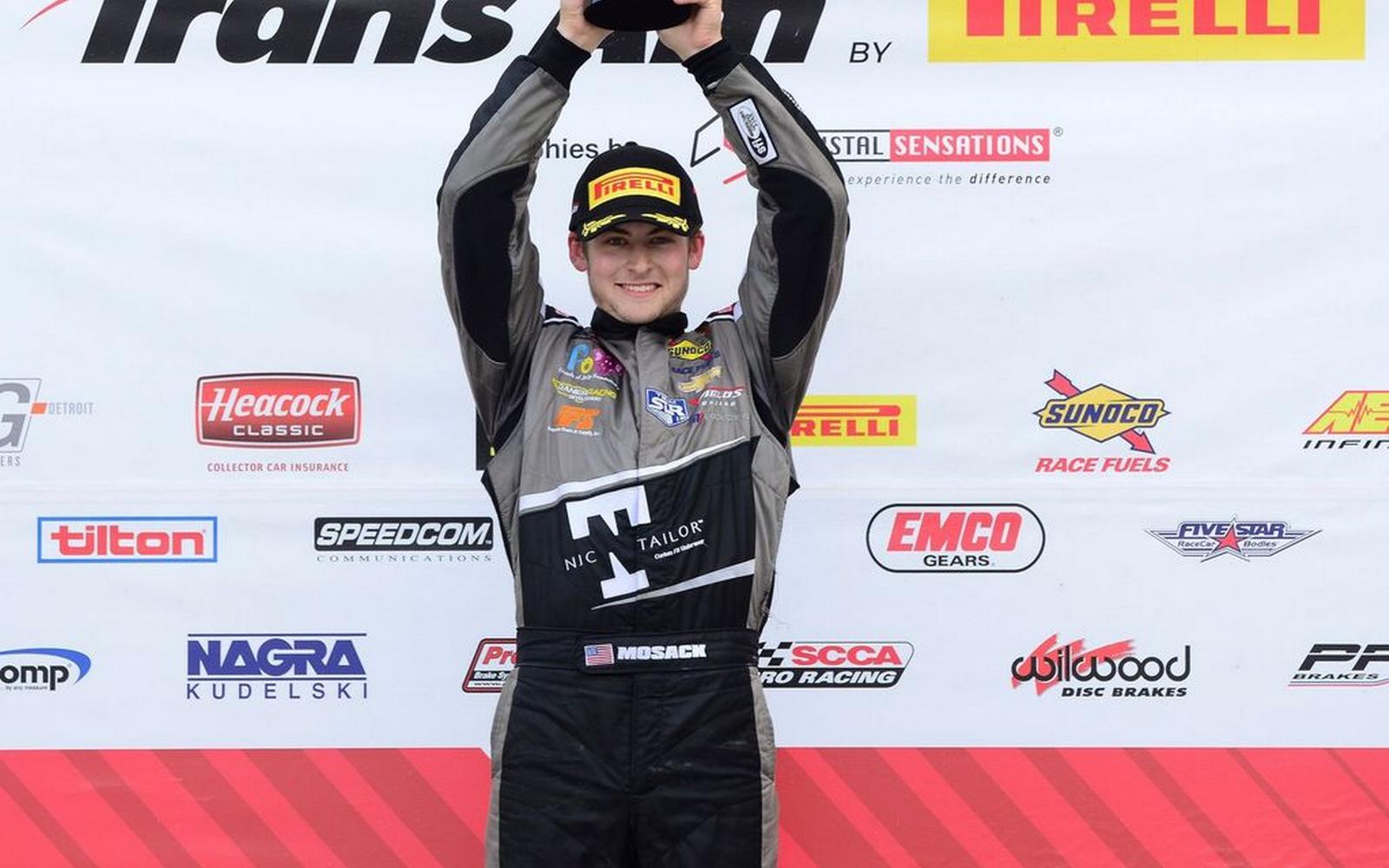 ST. AUGUSTINE, Fla. (Dec. 22, 2021) – Connor Mosack will return to the Trans Am Series presented by Pirelli in 2022 for a second full TA2 season behind the wheel of TeamSLR’s No. 28 Nic Tailor Custom Fit Underwear/Interstate Foam & Supply Chevrolet Camaro from M1 Racecars.

The 22-year-old racer from Charlotte, North Carolina, will also be eligible for the Peter Gregg Foundation Young Gun Award. The $20,000 prize will be presented to the top points-earning TA2 driver who is under the age of 25 and has participated in a minimum of three national Trans Am races.

Mosack enjoyed a breakout campaign in 2021 that included on-track and off-track milestones. In only his ninth career TA2 start, Mosack secured his first podium finish June 26 at the Mid-Ohio Sportscar Course in Lexington, Ohio, just a month-and-a-half after graduating with a degree in business entrepreneurship from High Point (N.C.) University. Then on Aug. 7 on the streets of Nashville, Tennessee, Mosack earned another podium finish. That set the stage for Mosack’s breakthrough win Sept. 12 at Watkins Glen (N.Y.) International. The triumph also boosted Mosack to third in the TA2 championship standings, a position he held through the season finale Nov. 7 at Circuit of the Americas (COTA) in Austin, Texas, where he finished second to championship winner Rafa Matos.

“I learned a ton this year, especially in terms of race craft – when you can take advantage of opportunities and when you need to save yourself, and also just how to make better lap times,” Mosack said. “The learning curve was steep, but that made our success all the more rewarding.

“It’s only a 12-race season, and when the checkered flag dropped at COTA, I wanted there to be another race. Coming back for another full season of TA2 with TeamSLR and M1 Racecars was a no-brainer. There’s a lot we still want to accomplish.”

Mosack’s upward trajectory in his first full Trans Am season was emblematic of his racing career as a whole. Mosack didn’t begin racing until he was 18. He started in Legends cars and after winning five championships, transitioned to Late Model stock cars in 2019. Mosack augmented his Late Model schedule with four TA2 races in 2020 for TeamSLR via the doubleheader weekends last fall at Virginia International Raceway (VIR) in Alton and Michelin Raceway Road Atlanta, respectively.

“Connor has a lot of pure talent, but he’s also put the work in to do a really good job in our racecars,” said Scott Lagasse, Sr., president, TeamSLR. “Prior to this season, he really hadn’t raced a lot, so to win at this level and run consistently up front week-in and week-out was very impressive. Connor just kept his head down and kept working. The proof was in the results. He got better with every race. He’s a lot of fun to work with and we’re all very happy to be back together for another season.”

Mosack’s success in 2021 came with perseverance. The season started with an unfortunate DNF (Did Not Finish) in the season opener at Sebring (Fla.) International Raceway when a cut tire in the waning laps scuttled a likely third-place finish. Yet nine races later at Watkins Glen, Mosack was a Trans Am race winner. It was a dominant win too, as Mosack took the lead on the opening lap from series veteran Matos and never relinquished it, leading all 30 laps around the 3.4-mile, 11-turn track to finish .883 of a second over his nearest pursuer, Tyler Kicera.

Mosack wants more of those moments, and with a full season’s worth of TA2 already under his belt, he sees more checkered flags in his future.

“Scott (Lagasse Jr.) and Senior (Scott Lagasse) have won a lot of races together and they have a ton of experience,” Mosack said. “They build and tune the M1 Racecars we use, so they know how to maximize the car’s performance. They’re awesome to drive and each of those guys have taught me a lot. They helped make a steep learning curve this year a little less steep.”

Mosack eyes a future in NASCAR, and with road-course racing becoming more and more prominent in NASCAR’s national touring series, the experience of wheeling a TA2 car on some of the most iconic tracks in North America has Mosack well positioned for his climb up the NASCAR ladder.

“I feel like I’ll have an advantage over most of the guys, at least in ARCA and probably Trucks, when it comes to road-course racing,” Mosack said. “Nothing beats seat time, and running the full TA2 schedule gives me an incredible amount of seat time. Every practice, every qualifying session, every race – I’m learning. I just feel like the style of the TA2 car is very applicable to what an ARCA car or a Truck or even an Xfinity or Cup car is like. That’s where I want to be and that’s why I’m putting in the time here with TeamSLR.”

The 55th season of the Trans Am Series presented by Pirelli kicks off Feb. 24-27 at Sebring.

TeamSLR competes fulltime in the Trans Am Series presented by Pirelli in a multifaceted effort that includes dedicated entries in TA2, customer programs, driver coaching and car construction. Its history dates back to 1985 and covers a wide spectrum of motorsports, including NASCAR, IMSA, SCCA, ARCA and ASA. TeamSLR is a family-owned organization run by Scott Lagasse Sr., and Scott Lagasse Jr., The father-and-son duo have combined to win well over 100 races and seven championships across a variety of series and styles of racecars, from paved ovals to road courses to dirt tracks. For more information, please visit us online at www.TeamSLR.com, on Facebook, on Twitter, on Instagram and on LinkedIn.