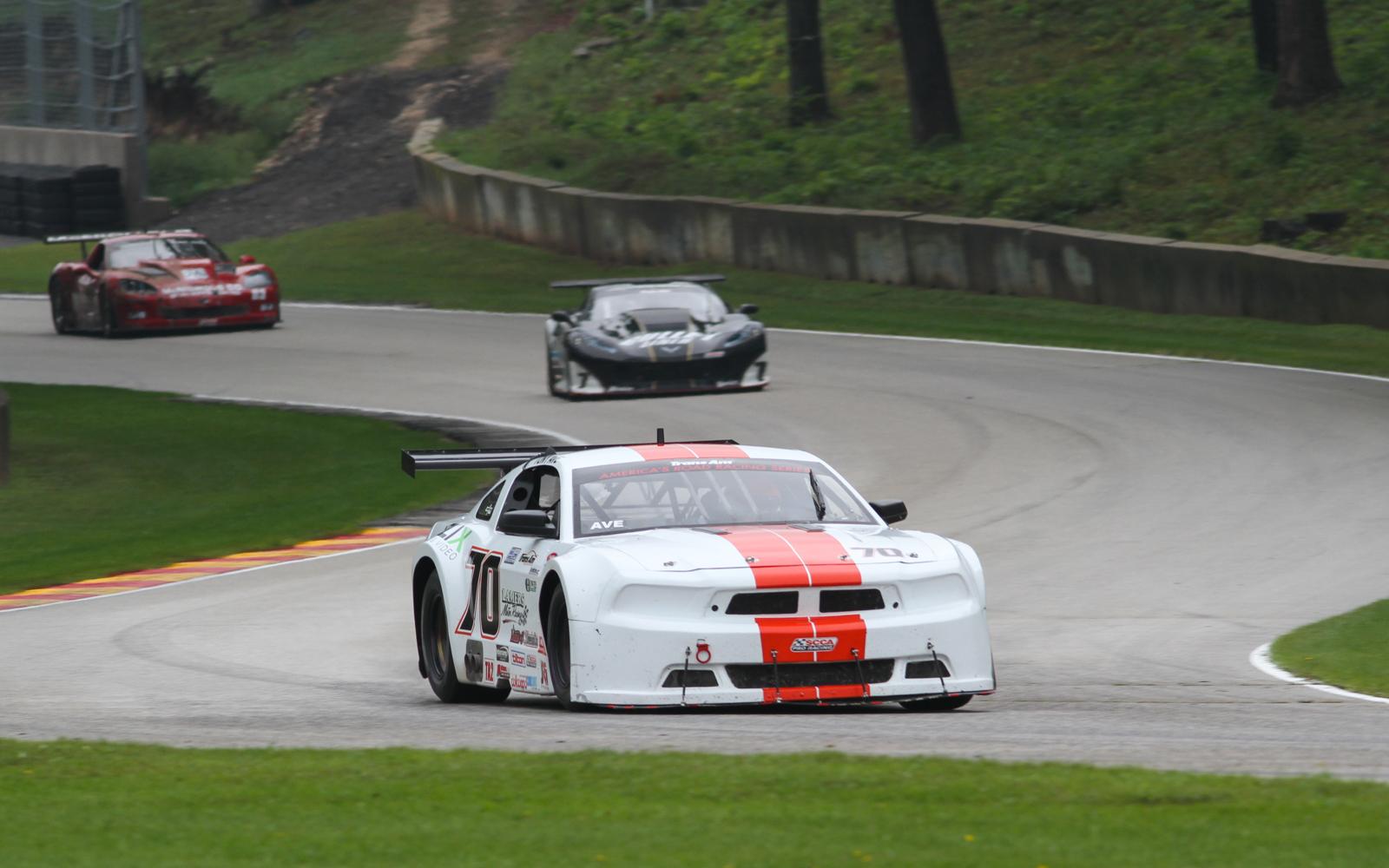 ELKHART LAKE, Wisconsin (August 30, 2015) - Tony Ave didn't let a wet and wild Trans Am Next Dimension 100 at Road America stop him from scoring another victory at his home track Saturday in the TA2-class No. 70 Lamers Motor Racing Ford Mustang prepared by Tony Ave Racing.

Ave's TA2 win, his second of 2015 after a Memorial Day Weekend victory in the No. 70 at Lime Rock Park, was one of several highlight performances at Road America by Tony Ave Racing (TAR) teams and competitors running Ave Motorsports-built AR-1 chassis.

Trans Am teams and drivers dealt with wet conditions most of the weekend at Road America, including race-day morning showers and damp and foggy conditions for the 10:30 a.m. CDT race. After the opening laps of the race on the damp and slick track were run under caution to allow the fog to clear, Ave knew there would not be a lot of time to race to the front.

"I was able to move up from 11th to third very quickly and was focused on getting the lead as soon as possible in case we ended up finishing early due to what I thought could be a big wreck on a very slippery track," Ave said. "As soon as I got up to the leading No. 1 car, I didn't waste any time. I got a run out of Turn 14 and was able to get by pretty easily on a couple dry lines in the middle of the track that nobody was seeing there. Then I pulled away pretty easily."

Ave kept the lead on a restart and was up front half a lap later when the multi-car accident he had anticipated brought out a yellow flag that soon ended the race. The checkered flag was flown under caution as officials determined not enough time was left to retrieve the numerous cars stranded off course.

Ave's win came in the first race for the No. 70 with a new a fuel-injected Ford engine developed by DSS, a Wisconsin-based high-performance engine company located not far from Road America.

"A late caution bunched us up, but I was able to keep the lead on the final restart even though we were having a bit of an engine stumble here and there," Ave said. "The new DSS engine gave us some challenges over the weekend but it ended up in victory lane!"

"Doug had a good race," Ave said. "A few carburetor issues in qualifying hurt our starting spot a bit, but all in all we are happy with the Cadillac so far."

Championship contender Paul Fix was looking to gain more ground in the points race in his TAR-prepared No. 4 StopFlex.com/CarCoach.com Corvette at Road America.

"Paul was poised to take another big chunk out of Amy Ruman's points lead but, unfortunately, we lost some engine performance and don't know why," Ave said. "Maybe it was a plug wire. Paul was able to hold his own until a caution, when he got swarmed on the restart with the lack of power and then got taken out in somebody else's wreck."

Cliff Ebben won the pole and dominated the race in his No. 36 Stumpf Ford/McMahon Group AR-1 Mustang until a late-race mechanical failure while leading brought his day to a heartbreaking end.

Ebben's exit set the stage for Jim McAleese to make a late move for the podium for the second-straight race, and this time it was a winning one. McAleese steered his No. 03 McAleese & Associates/Jetco Engineering AR-1 Corvette through oil on the track and the multi-car melee, getting by Peterson in the process, and led the final two laps of the race for the first Trans Am victory of his career. He finished a then career-best second one race earlier at Mid-Ohio.

"Jim McAleese did a great job to win but I have to mention Cliff Ebben had everybody totally covered until he had a driveline failure with a little over a lap to go."

Saturday was ultimately Ave's time to savor another victory at a track on which he has raced for decades.

"Road America is a great venue from me," said Ave, a native of Hurley, Wisconsin. Once again, a lot of my old snowmobile racing fans came out, and so many people I've met over the years come there when I race. I would like to race there a little more often if I could."

The Next Dimension 100 from Road America will be broadcast on CBS Sports Network on Saturday, September 12, at 10:00 a.m. EDT.

Next up for Ave Motorsports and Tony Ave Racing is Round 9 of the 2015 Trans Am Championship at Virginia International Raceway, September 25 - 27.