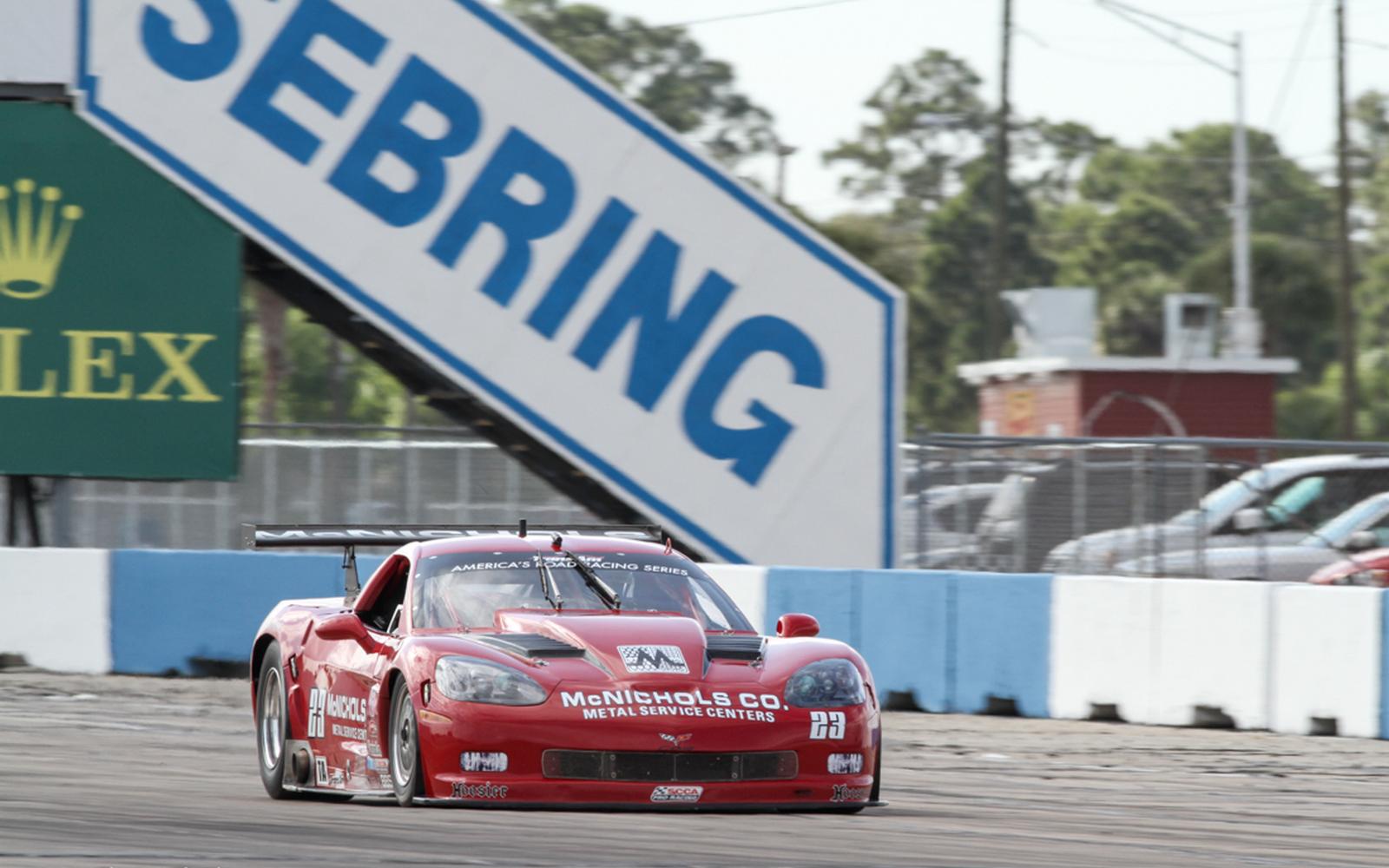 Sebring, FL – It didn’t take long for Amy Ruman to pick up where she left off from her victory at Daytona at last year’s season finale. The Ruman Racing No. 23 McNichols Co. Corvette was fast again right out of the trailer at Sebring International Raceway in Florida this past weekend.

The Florida weather did not cooperate at first, with the Thursday test day getting washed out along with the first scheduled qualifier. Dry conditions allowed for a second chance at qualifying which took place on Saturday morning. The season opening weekend proved strong for Ruman as she took the pole in qualifying with a lighting fast time of 2:01.183 around the 3.74-mile iconic road course. R.J. Lopez was second with a time of 2:01.400, followed by two-time defending Trans Am Champion Doug Peterson in third with a 2:02.623.

Ruman started on pole of the huge 69-car Trans Am field, and immediately jumped out in front of Lopez into the first turn to take the lead. As the field finished the first lap, the racing halted as the course came under caution due to several on track incidents. After numerous caution laps, the race resumed and Ruman took the green in the lead again. Lopez and Ruman battled lap after lap and Lopez passed Ruman for the lead on lap 10. Shortly after that the course fell under caution again.

Upon the restart, Ruman and Fix challenged Lopez for the lead into turn 1, going three wide! Ruman passed Lopez tight to the inside but then washed out allowing Lopez to pass back heading into turn 2. Ruman gathered it up and maintained second as they headed into turn 3. Ruman had a strong run exiting 3 and passed Lopez to regain the lead. Simon Gregg then passed Lopez and caught Ruman as the field was dicing through lapped cars. On the last lap, Gregg unsuccessfully tried to get by Ruman and tangled with Peterson. Ruman took the checkered and the win leading 19 laps of the 27-lap race, followed by Peterson, and Fix. The Foametix® Trans Am 100, Round 1 of the 2015 Trans Am Championship went to Ruman, her sixth Trans Am career victory!

“I couldn’t be happier with the McNichols 23,” said Ruman. “The car was just a rocketship today; I’m so proud of our crew and my father who gave me a great car for the race. We’ve got a PME engine under the hood like we did at Daytona, and we’re two for two with it. It’s a great way to start off the year for us and McNichols Company! I was so happy they were here to enjoy it with me!”

What made this win even more exciting for Ruman and the team was a number of family and friends on hand and many members of the McNichols “HOLE Team” that were on the ground at Sebring to catch the race, including Chairman Gene McNichols and Marketing Vice President Steven McNichols.

The results are still provisional, but it is anticipated that Ruman is in the lead of the Championship points race heading into Round 2 at Homestead-Miami Speedway April 12th.

You can catch all the action from The Foametix® Trans Am 100 at Sebring International Raceway, which will be broadcast on CBS Sports Network on Tuesday, March 17 at 8:00 PM, EDT.

Sponsor: McNICHOLS CO. is the nation’s largest distributor of Perforated and Expanded Metals; Wire Mesh; Bar, Plank, and Safety Gratings; Stair Treads; Matting; and more. Products are carried in all styles and materials–stocked for 24 hour shipment. “Inspired to Serve”™ 800.237.3820 mcnichols.com.