AUSTIN, Texas. [November 3, 2018] — In one of the tightest finishes in the history of the Trans Am Series presented by Pirelli, Texas’ own Gar Robinson captured the TA2 class victory over Misha Goikhberg in the COTA Muscle Car Challenge at Circuit of The Americas (COTA) by .064 of a second.

Robinson, in the No. 74 74 Ranch Chevrolet Camaro, and Goikhberg, in the No. 25 BC Race Cars Chevrolet Camaro, spent much of the 29-lap contest around the 3.426-mile, 20-turn Austin circuit within a car length of each other.  Robinson would assume the race lead on lap five after starting second but was tailed by Goikhberg closely and eventually overtaken by the No. 25 on lap 24 only to return the favor on lap 26.

Goikhberg would overtake Robinson again halfway through the final lap but was unable to distance himself with the duo of Camaros running side-by-side throughout the turns all while navigating lapped traffic.  Goikhberg would lead the race into the final turn; but Robinson proved resilient, keeping with the No. 25, resulting in a drag race to the finish line and an ensuing side-by-side finish and the slimmest margin of victory.

“Misha and I went side-by-side through the majority of the last lap,” said Robinson. “Lapped traffic was a bit of an issue for us; but after four years of trying to win this race, the desire was definitely there and it was the last chance.  I just stuck the car in knowing he had the inside line so I tagged outside with the feeling he might go wide, but it just turned into a drag race to the finish line.  We didn’t touch; it was just incredible.  It’s really how I like to run and I appreciate drivers who do the same.  It was just going to be who had it and luckily Katech power helped us past the checkered flag. Muscle cars and drag racing on road course… it doesn’t get any better than that.”

Robinson, a native of San Antonio, has spent four years in pursuit of a TA2 victory.  While other accolades and hardware have come his way, a victory at Circuit of The Americas has proved elusive for the 2015 and 2017 TA2 champion who now competes in Trans Am in part-time capacity.

“When we won Detroit, that was absolutely for my team,” said Robinson.  “Winning here, this is for me.  I’ve won Indy, I’ve won Detroit, I’ve won two championships… but this has been the one I’ve been trying to win throughout my Trans Am career and I’m thrilled we pulled it off.  I woke up with a good feeling about it this morning, and in the words of Matthew McConaughey, ‘all right, all right, all right!’”

The victory is the 11th of Robinson’s 42-start Trans Am career, while the second place finish sets a new career best for Goikhberg in his fourth start.  Goikhberg’s finish is the second consecutive for the No. 25 BC Race Cars Chevrolet Camaro, following up Tony Ave’s second place finish at VIRginia International Raceway last month.

Joining Robinson and Goikhberg on the podium was Dillon Machavern, in the No. 59 RedLineOil/ Manufacturing News Chevrolet Camaro, finishing third.  Machavern began the contest in 18th position but moved up to third by the 14th lap, Machavern would be passed by Brad McAllister, in the No. 24 PortlandImplantDentistry.com Ford Mustang, on the 19th lap but regained the position on the 27th for his 15th career TA2 podium.

Racing amongst the TA2 field were members of the Trans Am West Coast Championship, with Brad McAllister taking the TA2 West victory, Michael Mihld, in the No. 55 Track Fanatic Chevrolet Camaro, second in division and David Smith, in the No. 15 Shockwave Suspension Seats Chevrolet Camaro, third.

“It’s a nice bookend of West Coast wins,” said McAllister.  “I won the first ever West Coast TA2 race at Willow Springs and now, what I thought would be, the last West Coast win. But I’m glad to hear the West Coast will return in 2019.  It was fun to run together with the East, and I’m excited to do it again next year.  I was third overall right towards the end there, and I felt really good about the race.  Hopefully we’ll be back stronger next year!” 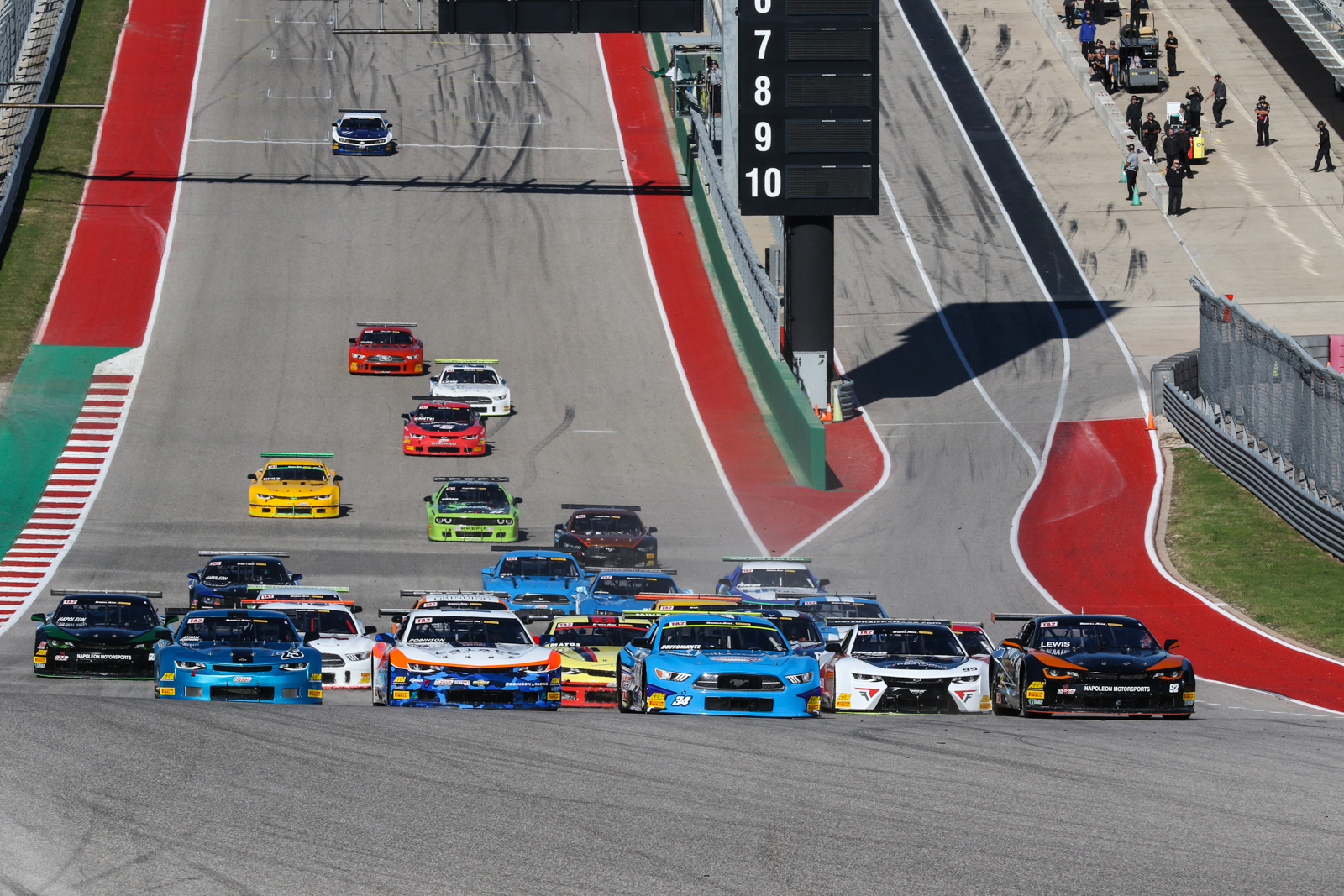 Just as the race was punctuated by its finish, it was also noted for a chaotic start with multiple front runners, including pole sitter Tony Buffomante, in the No. 34 Mike Cope Racing Ford Mustang, then leader Shane Lewis, in the No. 92 Napoleon Motorsports Chevrolet Camaro, VIR victor Scott Lagasse, in the No. 95 SLR/ Fields Racing Chevrolet Camaro, and recently crowned champion Rafa Matos all either spun or  contacted as the field compressed in turn one, bringing out a full-course caution that lasted three laps.

Lagasse, Matos, Lewis and Louis-Philippe Montour would all retire from the race in the aftermath.  Due to the start and ensuing incidents Chief Steward Dorsey Schroeder has placed the race results under review.

Trans Am’s TA, TA3 and TA4 classes will hold qualifying for their COTA Trans Am 100 later this afternoon at 5:47 PM CT, with the race to follow on Sunday.  The TA2 class will now head to Daytona International Speedway for the 2018 Trans Am Season Finale, held next weekend.