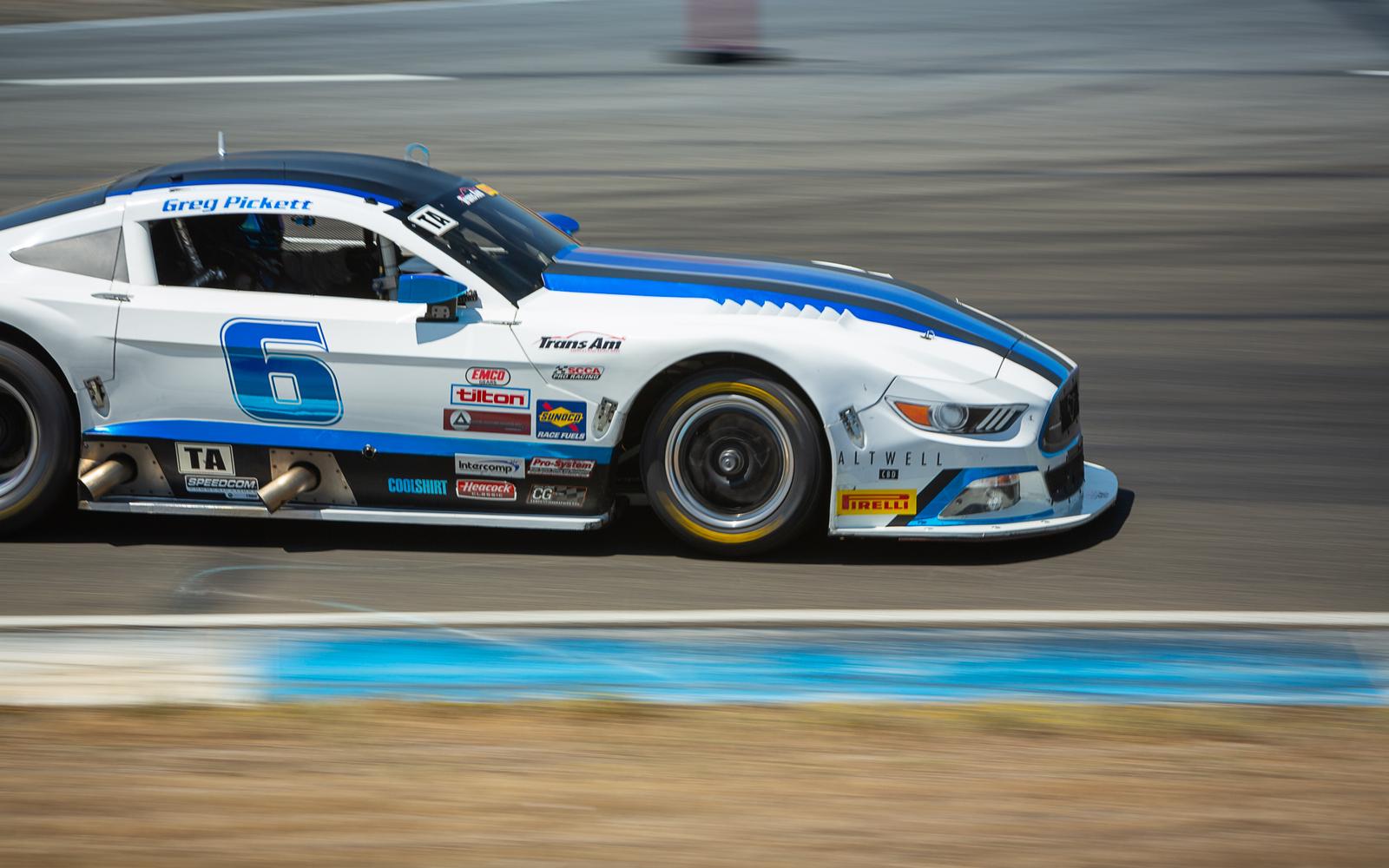 WILLOWS, Calif. (Aug. 2, 2020) -- The 2020 Trans Am Series presented by Pirelli West Coast Championship opened its competition season Sunday on Thunderhill Raceway Park’s three-mile, 15-turn circuit during a 33-lap race covering 99 miles. Those numbers -- 3, 15, 33 and 99 -- are all odd. But what wasn’t odd at all was to see Greg Pickett claim an overall and TA victory in the No. 6 Pickett Racing Ford Mustang.

It was XtremeGT (XGT) driver Simon Gregg, in the No. 59 Derhaag Motorsports Mercedes AMG GT3, who started the race on pole and led the opening laps of the race.  By the third lap, Pickett had moved past Gregg and extended his lead to upwards of 30 seconds on his way to the record-setting victory. With the win Sunday, Pickett has achieved the rarest of feats: collecting professional race wins in six consecutive decades. 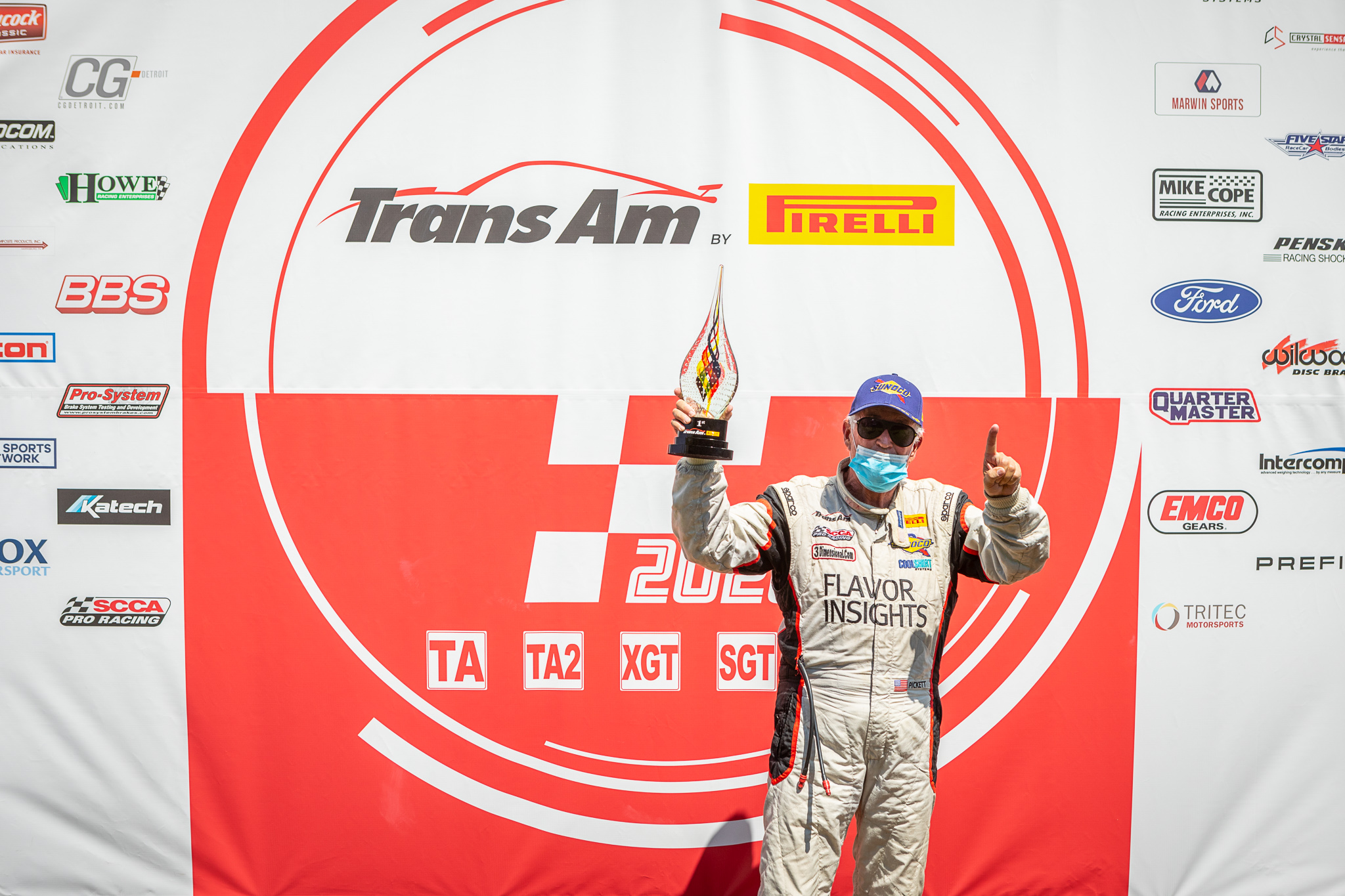 “Trans Am is near and dear to my heart,” Pickett said. “To get one of these in each of six decades is a real accomplishment. I’m very proud of my team, and very proud of my family for letting me do this stuff for that long. And I’m proud to be competing at a high level and being very competitive.

“The weather, the heat, made it a little difficult today,” Pickett continued. “About 45 or 50 minutes into the race, the car started getting pretty loose. Thankfully, I had enough pace early to create a gap, and we fundamentally just cruised around later.” 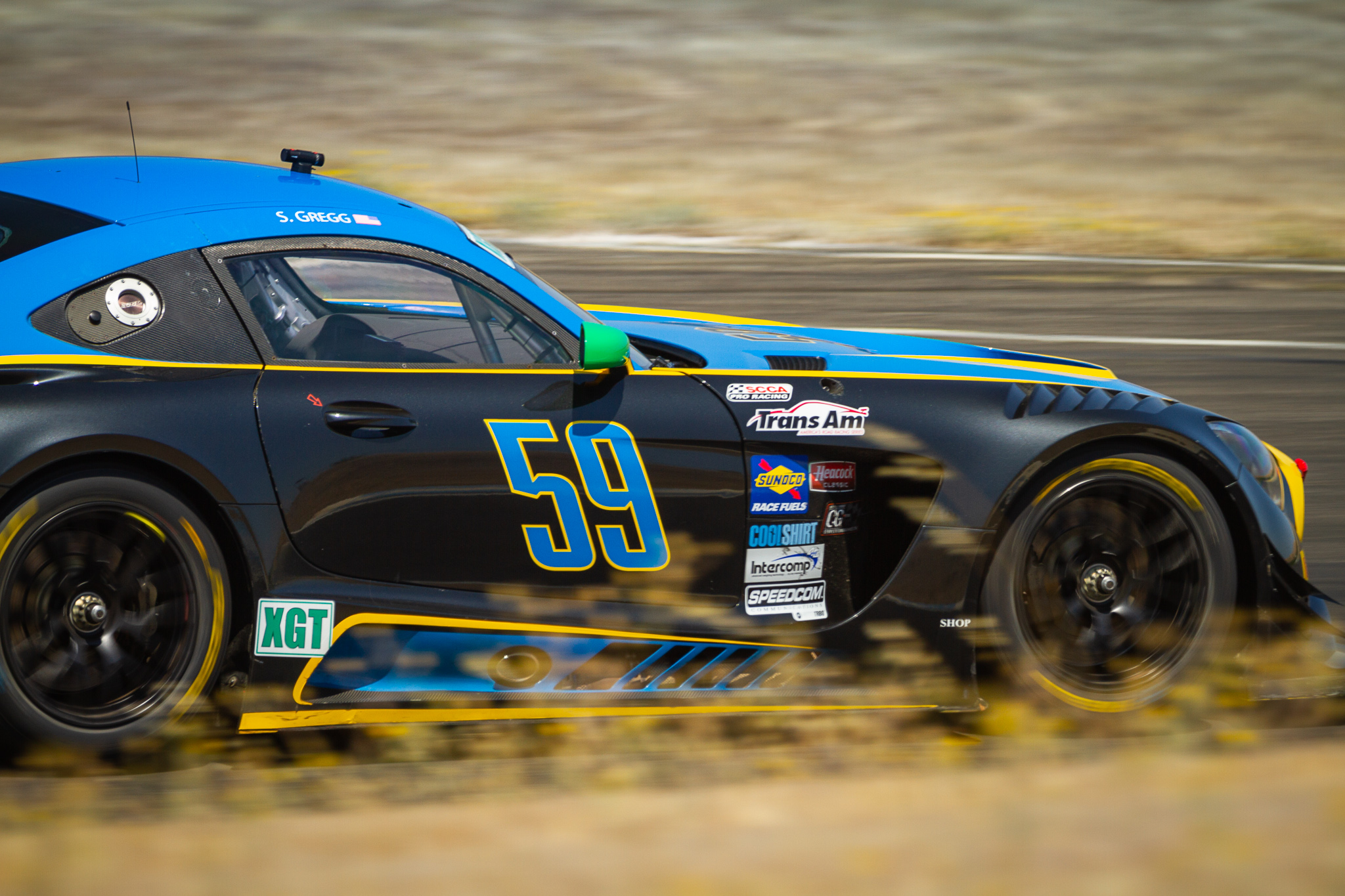 “Qualifying was a highlight and it was thrilling to get the track record,” said Gregg. “But consistency wins the race.”

The TA2® powered by AEM class was led to the green flag Sunday by the No. 49 Western Grinding Chevrolet Camaro of Ethan Wilson. He stayed out front the entire time, ending up with a four-second lead on runner-up Tim Lynn in the No. 17 RoofOptionsRacing/TFBPerform Ford Mustang. And with that, Wilson earned his first Trans Am West Coast victory.

“We were really strong all weekend,” Wilson said. “We knew we had the pace, but we had to keep the car underneath us. I made a smart start to get into the lead, and put in some hot laps to build a gap. And then it was just managing the brakes and tires throughout.” 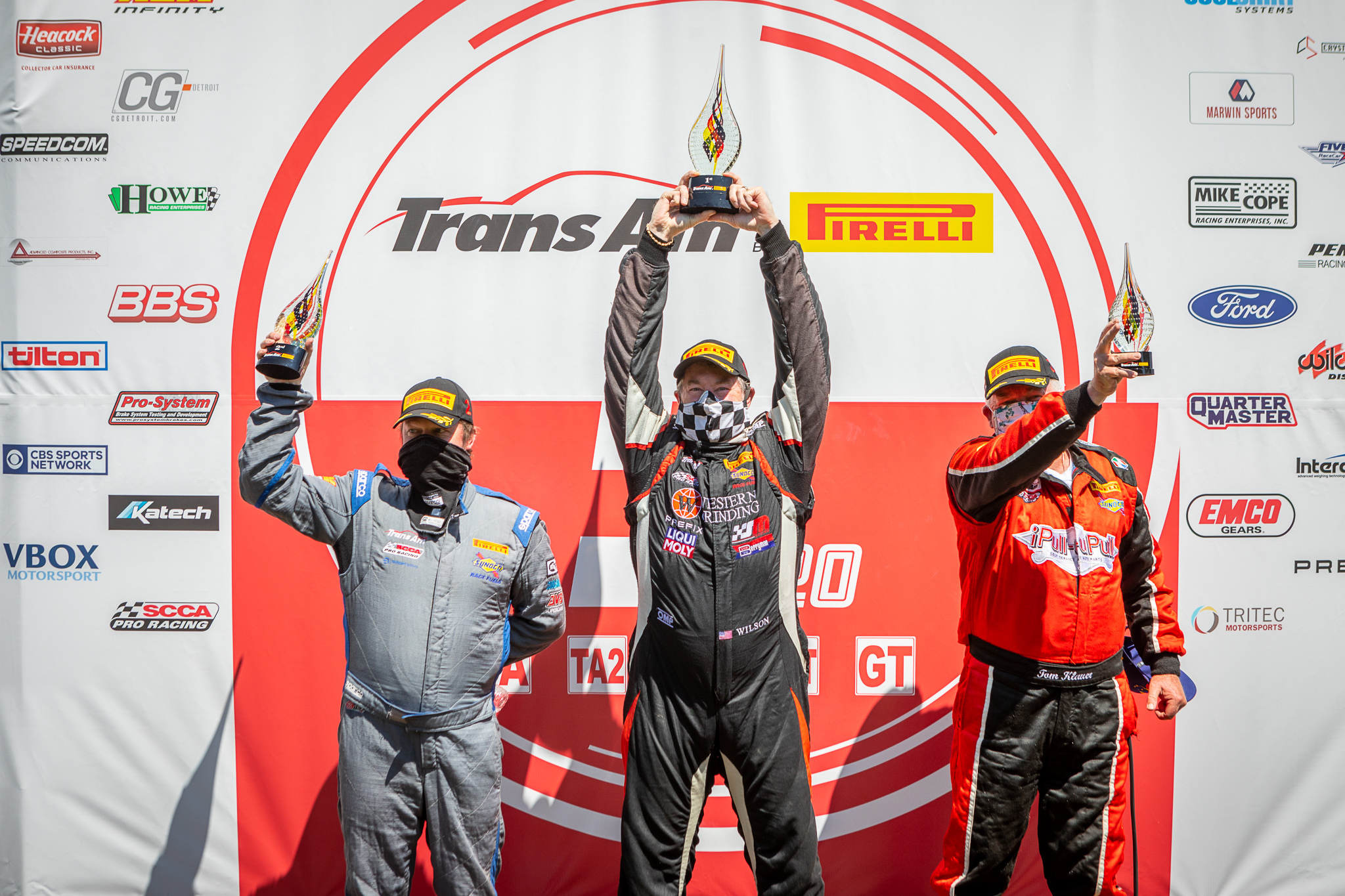 “Something happened with the left-rear tire. I was basically driving a three-wheeled car for the race,” Rydquist said afterwards. “So, today, we couldn’t quite show what we’ve got in the car.”

Beau Borders started on pole in the GT class driving the No. 7 APEX Race Parts Ford Mustang. But Joe Bogetich, driving the No. 65 Westover Corporation Chevrolet Camaro, had the lead by the end of lap one. On lap six, Borders popped into the pits to deal with an overheating motor. He came back out on track nearly a full minute behind Bogetich. 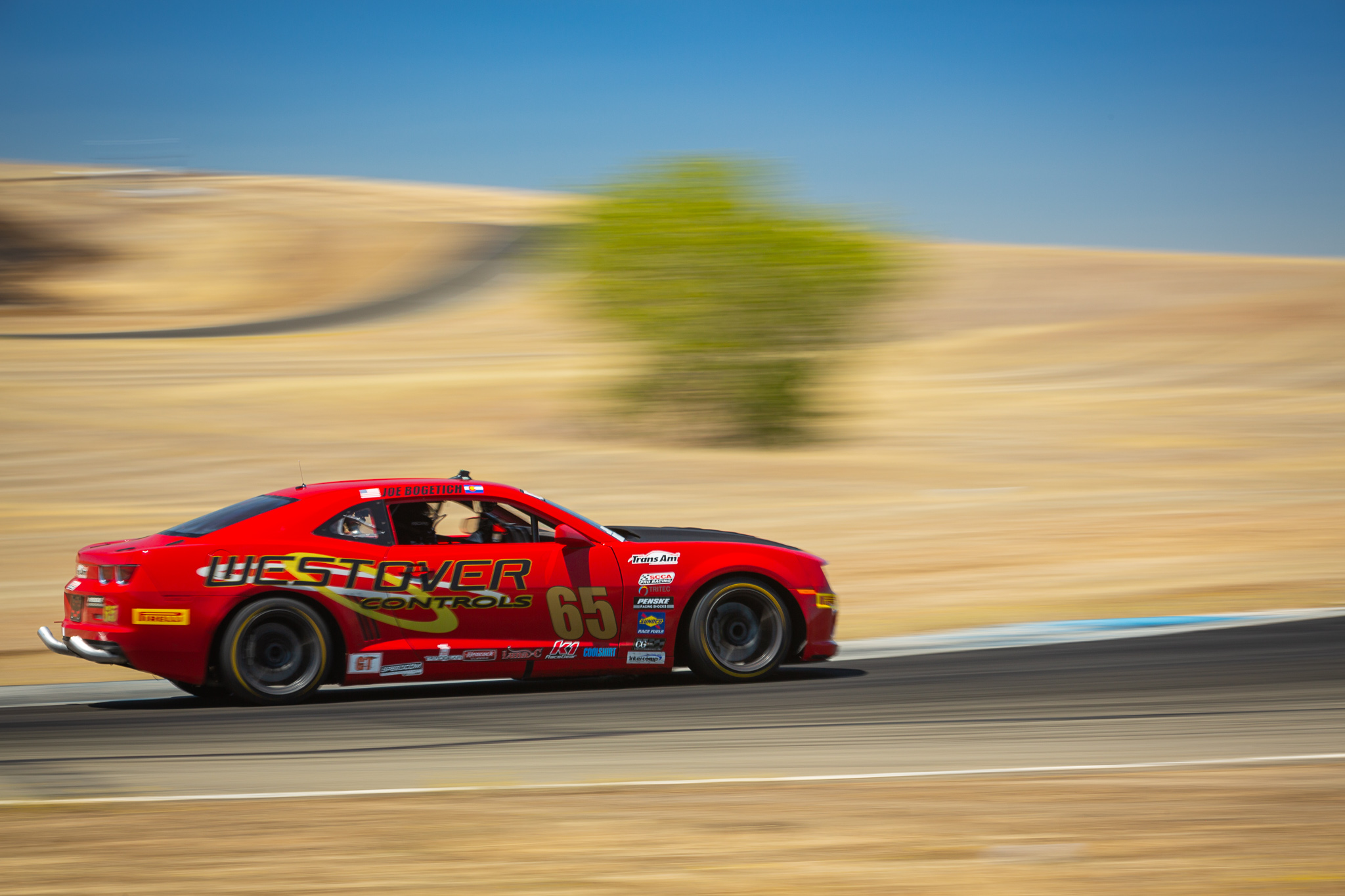 Turns out that wasn’t an insurmountable gap for Borders as he slowly reeled in Bogetich. At the end, Bogetich’s winning margin was only three seconds.

“If this race had gone another lap or two, he would’ve gotten around me,” Bogetich acknowledged while holding his first-place trophy.

Next up for the 2020 Trans Am Series presented by Pirelli West Coast Championship is an August 21-23 visit to Sonoma Raceway about 45 minutes north of San Francisco. Fans can follow live timing and scoring on GoTransAm.com.