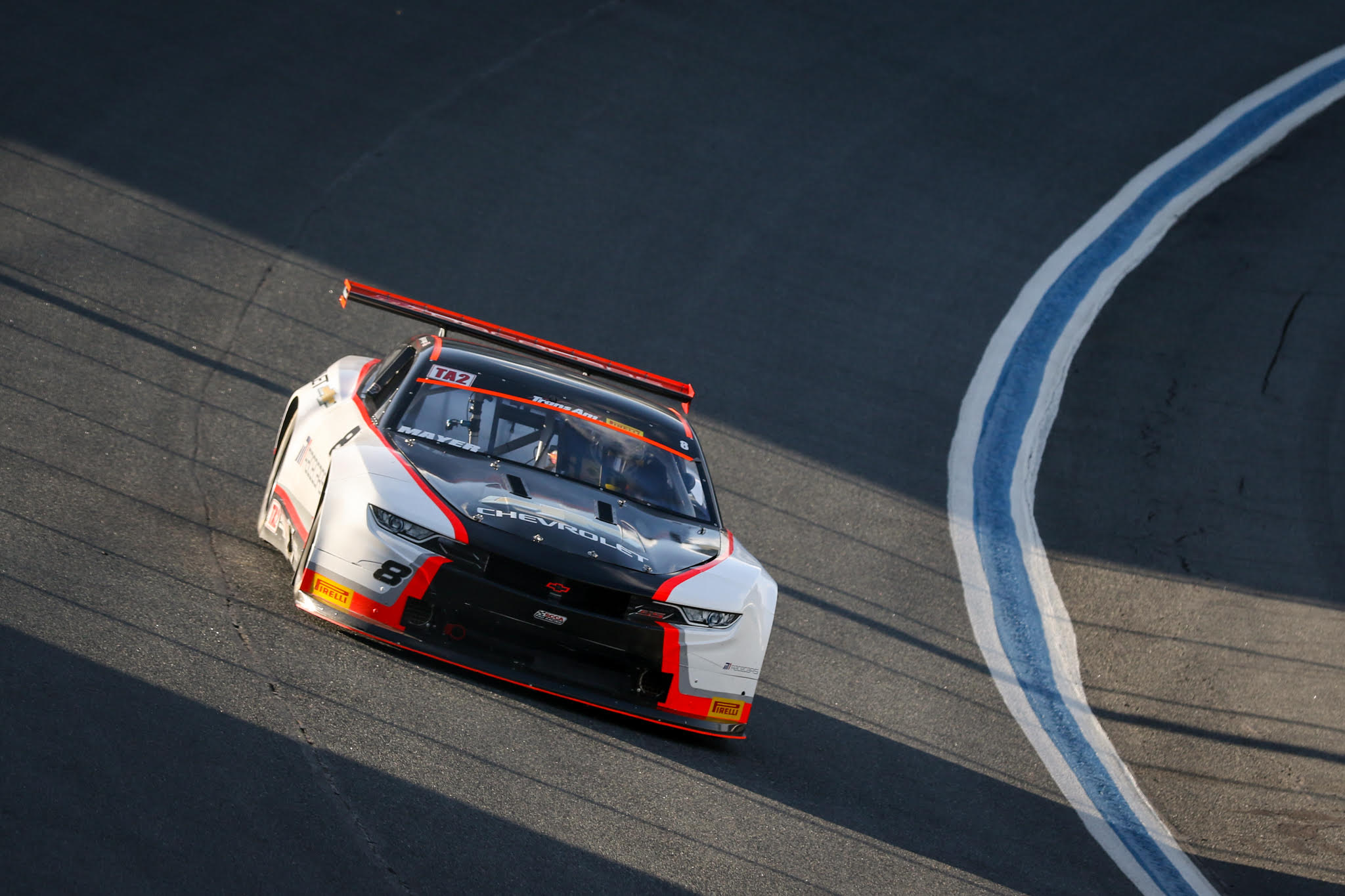 The 16-minute combined session started with TA2® drivers Sam Mayer and Ty Gibbs outpacing the faster TA class around the cold 19-turn Roval. But as the Pirelli tires came to temperature on Oscar Teran’s 850-horsepower No. 3 Breathless Racing Ford Mustang, the Panama local edged out Mayer for overall pole position with a fast-time of 1:20.196-secods, just .112-seconds ahead of the up-and-coming NASCAR driver.

“I am feeling great after that run,” Teran said. “The team has worked a lot on the car since our test yesterday. It took some time to warm up the tires, so we had to be careful on the first few laps, but then we were able to give it full gas to take the pole. Our goal for tomorrow is to finish the race and a podium would be great too.”

Mayer set the benchmark early, clocking his personal best time on Lap 3 (1:20.308-seconds) in the No. 8 M1-SLR/Fields Chevrolet Camaro.  After losing the top spot at the halfway mark, Mayer scrambled to reclaim the position, but a black flag halted his progress and ended the session prematurely.

“Our session was nice, short and sweet,” said Mayer. “We only ran three laps and had speed right away out of the car which was good. It’s going to be a good race. We are going to be the dominate one to beat, so hopefully we end up with the win.”

Mike Cope Racing drivers will make up the second row. Gibbs qualified with the third-fastest overall time of 1:20.760-seconds in the No. 26 Mike Cope Race Cars.

Exiting the final chicane onto the front-straight, Corey Heim lost control his No. 99 Mike Cope Race Cars making contact with the barrier. He emerged unscathed, and is set to start from fourth on the grid after having clocked a fast lap time of 1:22.447-seconds before the incident.

“I just tried to push it too hard at the end and lost it,” said Heim. “It’s my first time here, and I am still getting used to the car and track. As a driver, you always want to be better, be faster. Fourth place is not where we wanted to end up, but we will regroup tonight and be quick tomorrow.”

ECC Motorsports made a last-minute driver change for the No. 44 ECC/AnchorBolt&Screw Chevrolet Corvette, swapping out AJ Henriksen for the team’s part-time national driver Adam Andretti, who took fifth with a quick time of 1:24.012-seconds. 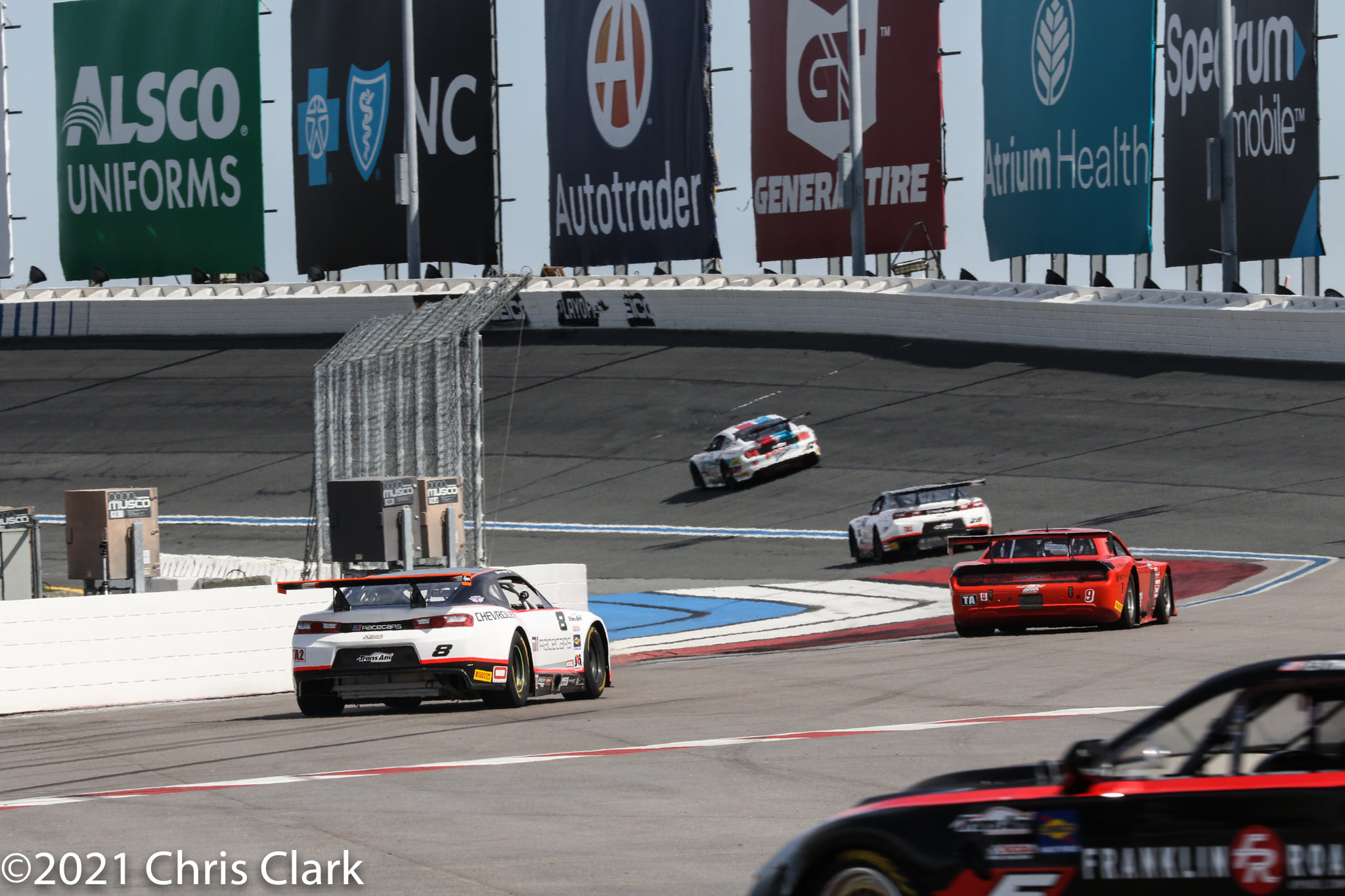 On her final lap, Natalie Decker (No. 04 Nl29 Technologies Audi R8) edged out long-time Trans Am driver Mark Brummond (No. 24 GarageDoorDoctor/DynamicAutoTune BMW M4 GT4) by just .024-seconds to claim her first pole-position start of the season in the SGT class.

The first Trans Am event at Charlotte in more than two decades will likely see a lot of passing, as the grid will be bolstered by several hard chargers on Sunday.

Silver Hare Racing drivers Harrison Burton and Brandon Jones did not qualify as they were at Atlanta Motor Speedway preparing for Saturday’s Xfinity NASCAR race. The pair will return for Sunday’s Trans Am ProAm Challenge but will start from the back of the field.

TeamSLR owner Scott Lagasse Jr. elected to save tires for Sunday’s 100-mile feature and did not run Conner Mosak in Saturday’s qualifying session. Mosak will start from the back of the field tomorrow with Burton and Jones.

Simon Gregg, who was quickest in Friday’s afternoon test, turned laps in qualifying, however, a faulty transponder on the No. 59 The Peter Gregg Foundation Chevrolet Camaro did not record times. 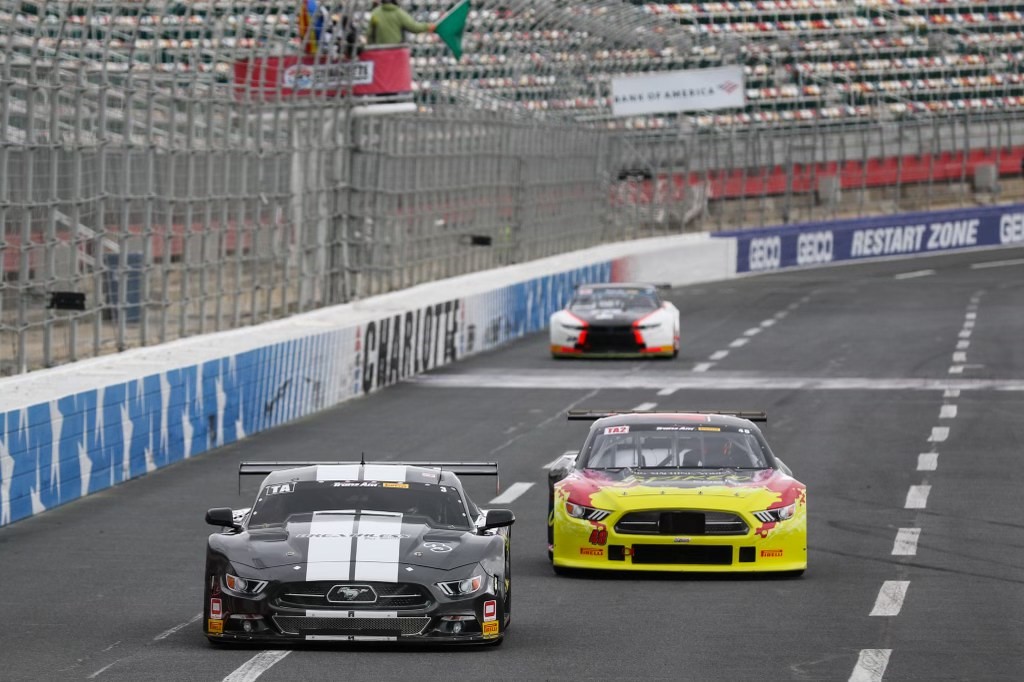 Charlotte Motor Speedway is the only stand-alone ProAm Challenge event, as the Sonoma Raceway round will be held in conjunction with the Trans Am Series presented by Pirelli West Coast Championship season opener in April. National drivers participating in these rounds will not earn points toward their class title chase.

The combined class feature at Charlotte Motor Speedway for the Trans Am ProAm Challenge will go green on Sunday at 11:25 a.m for 45 laps (or 75 minutes) of high-pace American Muscle racing. Follow live Timing and Scoring at www.GoTransAm.com/livetiming.