The Trans Am Series presented by Pirelli raced for the only time at Dallas Fair Park in 1988, an event that produced several memorable firsts.

The Fair Park street circuit hosted Formula One in 1984, in a race run in 100-degree heat won by Keke Rosberg that’s best remembered by an exhausted Nigel Mansell collapsing while attempting to push his car to the finish line on the final lap.

The venue was next used for the second race of the 1988 Trans Am, won by Hurley Haywood in an Audi on a 1.3-mile circuit that used sections of the Formula One course.

“It was at a fairgrounds, and it was a one-lane racetrack,” Haywood recalled in a recent interview. “That led to real miserable conditions – probably the worst conditions I’ve seen at a race track. If you got off line by one inch, you went off into the wall.”

Irv Hoerr finished second in the No. 15 Hoerr Racing Oldsmobile Cutlass, 46 seconds back, the only other car to complete 105 laps.

Jerry Brassfield finished a career-best third in the No. 87 Mobil 1 Chevrolet Camaro that was co-driven by his son Darren. He was followed by the No. 80 Lindley Racing Camaro of Willy T. Ribbs and Jim Derhaag in the No. 40 Sign Art Camaro. Bruce Nesbitt had the highest-finishing Ford Mustang, taking sixth in the No. 50 Teflon entry, also taking home the Timex Speedtrak Move of the Race award.

Darin Brassfield encountered electrical problems on the Brassfield/Tommy Morrison No. 88 Mobil 1 Corvette at the start. He managed to get the car running, only to have it quit again on the opening lap with an electrical failure. He then took over for his father during the pit stop in the 125-mile race – longer than the normal 100-mile Trans Am distance.

“That was an interesting race,” the younger Brassfield recalled in a recent interview. “After I went out, they decided to put me in the car to score some points during the pit stop. That’s the only reason I got in the car. That was the year the Audis had total domination – you couldn’t do anything with them, especially on a slippery street course, and they had super-talented people who could drive the wheels off it.”

The race featured six lead changes among four drivers. Pole winner Roehrl led three times for nine laps, including the opening four. Ribbs then took over and led three times for 57 laps. Hoerr led once for four laps, with Haywood leading the final 48 circuits, beating Hoerr to the checkered flag by 45 seconds.

“With the Audi, I could go anywhere I wanted,” Haywood said. “I remember Willy T. was struggling to hold the line. I went around him in a slow corner and gave him a little wave. He didn’t like that.”

Haywood went on to win at Detroit and tally six podiums en route to capturing the Trans Am title.

While 1988 was the lone Trans Am at Fair Park – and final major motorsports event at that venue – the series returned to the Dallas area five times. Hoerr won twice on a temporary circuit in Addison in 1990-91, while Trans Am raced at Reunion Arena in 1993, 1994 and 1996. 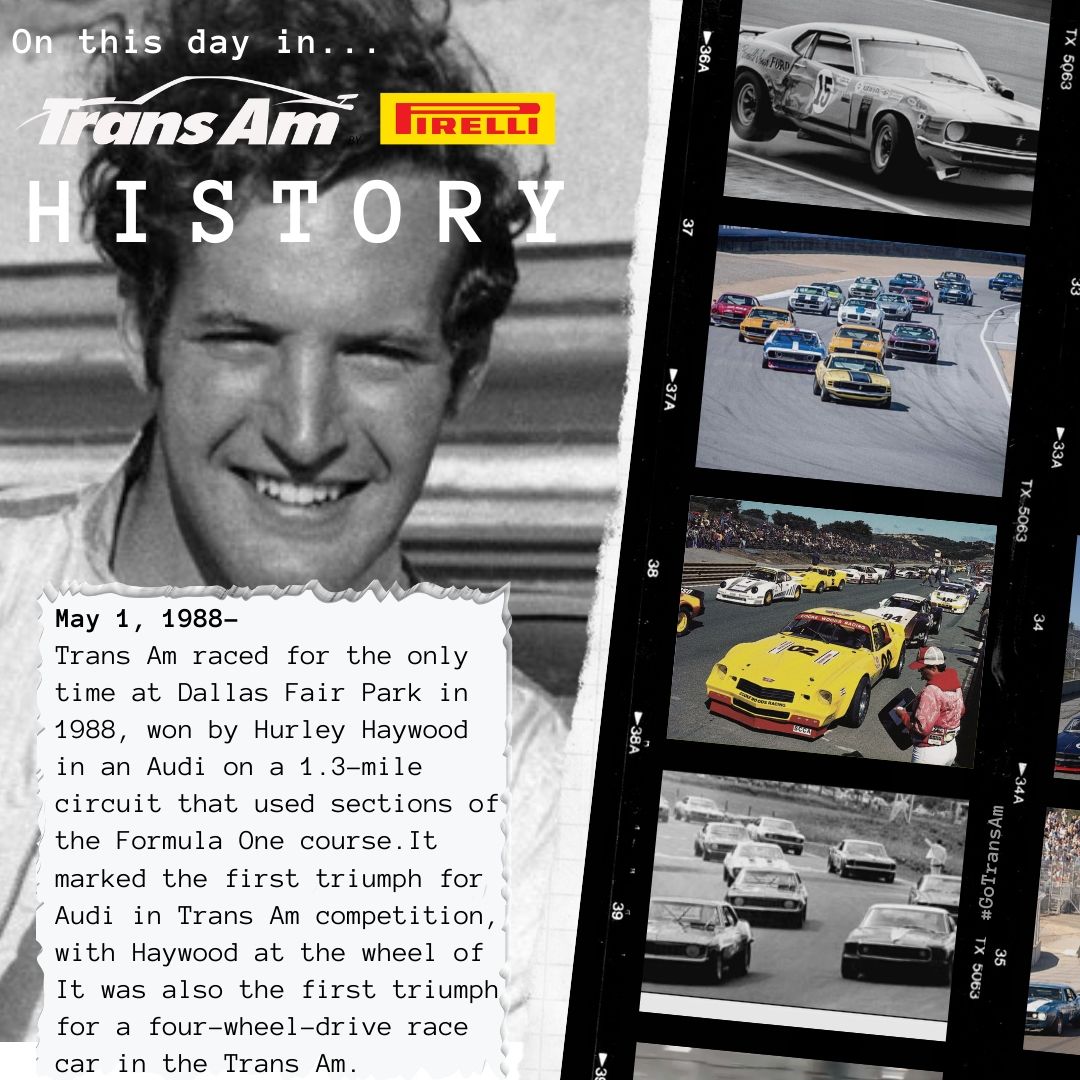