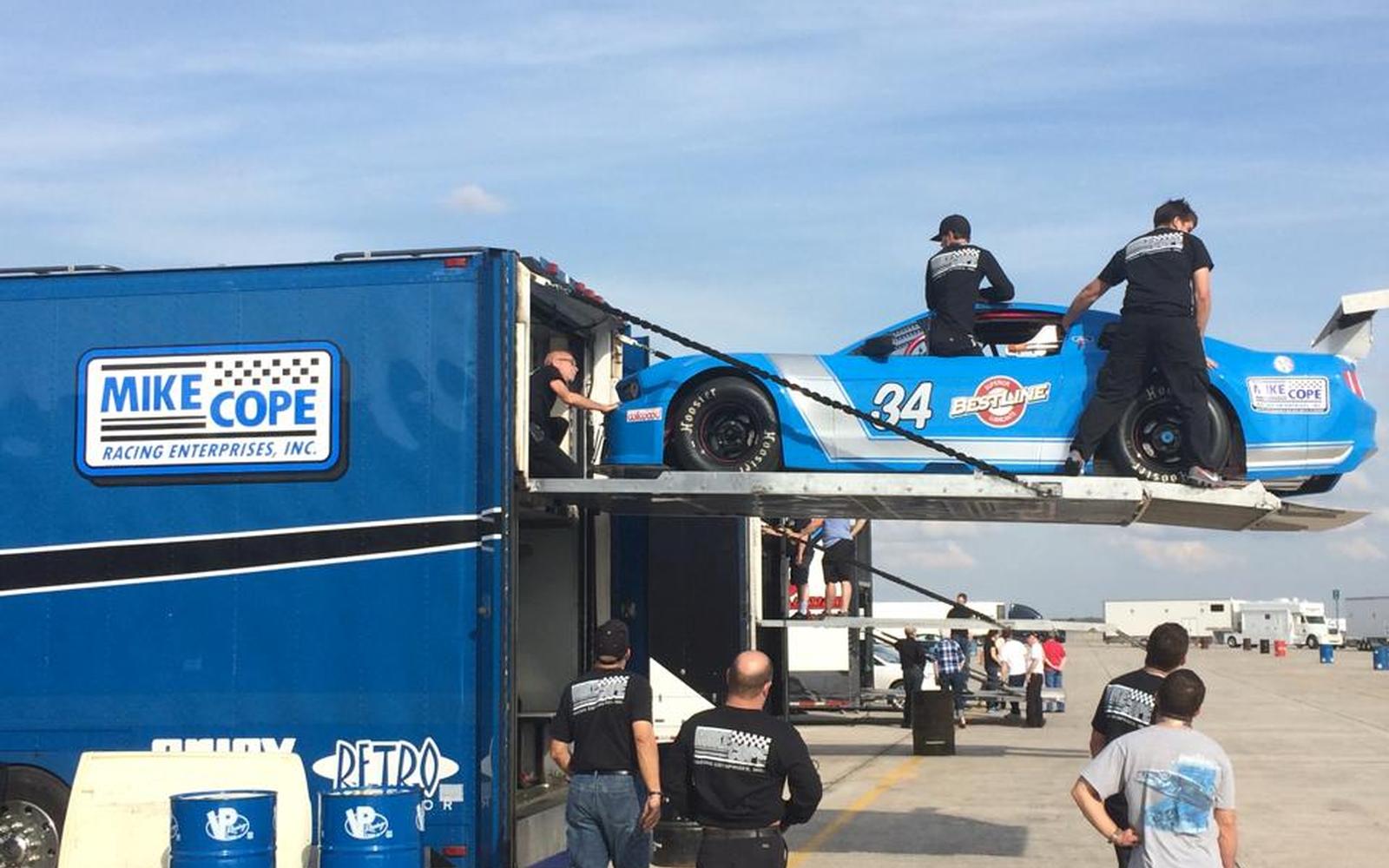 SEBRING, Fla. (February 26, 2015) – With Round 1 of the 2015 Trans Am Championship, the Foametix 100 at Sebring International Raceway, this Sunday, March 1, Mike Cope Racing Enterprises (MCRE) heads to the fabled Florida track ready to start the season in style and with a complement of new cars and drivers alike.

“The whole MCRE team has worked incredibly hard throughout the off-season,” said Mike Cope, team owner. “Between building cars for clients throughout the Trans Am paddock and prepping our own team, it’s been a real effort. We’re all ready for the season to kick off and to get back to racing.”

“The driver talent we have on hand at MCRE for this weekend is incredible,” continued Cope. “Kevin (Poitras) has proven time and time again that he has the quality to compete at the top level in Trans Am; and as he enters his second year, I expect him to only get better. Tony (Buffomante) put on a great show at VIR last year in a one-off, and I can’t wait to see what he can do in a full season. Keith (Prociuk) has had great success in NARRA with two Championships to his name, and JJ (Haley) is an up-and-comer within the NASCAR ranks and one of the best young talents around. It’s going to be a pleasure working with these guys at Sebring; and as always, we’ll work to give them the best cars possible.”

Now, as MCRE enters its second full year of competition, the team will look to build on its combined success in 2014 where MCRE drivers finished third and fourth in the 2014 TA2 Championship point standings.

“We had a lot of success in 2014, and we learned a lot as well,” said Cope. “We’re ready to raise the bar in 2015. We know more about these cars and more about the tracks we are visiting. The competition is going to be tough; we’re looking at over 30 cars in the TA2 class alone at Sebring; but I’m confident that the ability of our drivers and the quality of our cars will allow us to compete with the best.”

The MCRE team will be faced with the daunting task of navigating a 72-car Trans Am field at the Foametix 100, with 33 of those being competing TA2 cars. MCRE will first take to the track at Sebring at 11:10 a.m. ET on Friday, February 27, for the first practice session of the 2015 season, followed by “Fast Five” qualifying at 3:30 p.m. later that afternoon. On Saturday, February 28, the MCRE team will have an additional practice session at 11:50 a.m. which will also serve as an opportunity to re-qualify. Finally, MCRE drivers will kick of the 2015 Trans Am Season with the Foametix 100 at 2:30 p.m. on Sunday, March 1, for the 100.98 mile, 27-lap race.

Fans can watch the race on CBS Sports Network on Tuesday March 17 at 8:00 p.m. ET. Until then keep up with the MCRE team on Twitter @mikecoperacing, online at www.mikecoperacecars.com and through live timing and scoring during all Trans Am sessions at http://gotransam.com/live-timing/.

Keith Prociuk, driver of the No. 9 HP Tuners Chevrolet Camaro

What made you want to make the switch to TA2, Trans Am and MCRE?

“I’ve been racing Vipers for two years now, and I’ve done pretty well. I’ve won the Championship two years in a row. And as a driver, at least for me, you want to get better. I saw TA2 as a way to improve; some of my teammates started racing in TA2, and I did a race at VIR last year and finished seventh, which I thought was pretty good. The competition is really here, and I’ll improve here and learn a lot from these guys. “

“Mike Cope is well spoken about by everyone. Last year he put cars on the podium, and his organization is incredibly well laid out. That’s what I wanted, I run my own company, I don’t have the time to be involved in the development of the car and I can trust Mike to make sure it’s ready and well prepared to go racing.”

Are you excited for the 33-car field and the new drivers in TA2?

“This is the biggest event ever for Trans Am. It’s going to be busy out there; I’m not sure how we’re going to fit all of those cars on track. As a TA2 driver, we have to keep an eye out for the faster TA cars and still make the move on the TA3 cars, while managing our own race. It’s going to be nuts out there. But with 33 cars in my class, I’m going to be gunning for a top ten finish. I’ll be happy with that.”
-more-

Have you had the opportunity to test the No. 34 out and build on your comfort level with the car?

“We tested a month ago here at Sebring—spent a few good days and learned a lot about the car and dialed in the setup during the process. I’ve run two TA2 races before and there are huge gaps between my prior TA2 experiences, and I’m getting really comfortable with the car now. Hopefully, we’ll get some dry conditions to test and practice in before qualifying, because with 33 cars we’ll need a good starting position to challenge.”

Are you excited for the 33-car field and the new drivers in TA2?

“The level of the competition has gone up tremendously—not just in car count but in the quality of the drivers. It’s exactly what Trans Am wanted and exactly what I wanted. I wanted affordable racing, high performance cars, with big fields and against tough competition. When you win a race here you want to be able to say you’ve accomplished something. I’m super excited. I love that Tony (Ave)’s back in the field. I have a huge amount of respect for him. He’s one of the all-time win leaders in Trans Am, he’s a fantastic engineer, and he’s in a Mike Cope race car; so we’re on an even playing field— that makes me nervous but excited at the same time”

How has everything gone with MCRE so far?

“I love working with these guys. They’re racers. Mike’s a racer. Travis is a racer. They’ve been doing this for years and years. For me it’s the perfect fit. We’re combining what is a 30-year road racing background from me with their experience and a huge amount of knowledge with this platform, which is very similar to a circle track car. They’ve been fantastic to work with and we were rocket-ship fast in testing, so I’m very optimistic for this weekend.”

Kevin Poitras, driver of the No. 73 Post Plastics Ford Mustang

Have you had the opportunity to shake down the No. 73 yet?

“No, I actually haven’t. Fortunately, we have a full day of testing coming up; and I have a full season of experience behind the wheel of these cars. I’m really excited for it though—from the pictures the team has sent me it’s beautiful. Last year we were a little down on power, and I’m confident that will not be an issue in 2015—hopefully we can put on a show.”

What are your goals for the 2015 Trans Am season?

“Last year I was learning all the tracks we were racing on; for most of them it was my first time there—it was also my first season behind the wheel of a TA2 machine. This year I’m pretty comfortable with everything, but the level of competition has also skyrocketed. In 2014 we saw the same guys on the podium every race, I see it being so much different this year and I think we’ll see at lot more faces on the podium. I know it’s going to be a very competitive field, but my goal is to be in or around that top five every race and hopefully be in the Championship hunt come the end of the year.”

JJ Haley, driver of the No. 99 BraunAbility Chevrolet Camaro

What made you want to join TA and MCRE?

“We signed on a full deal in the K&N Pro Series East where they run two road course races. My uncle is a good friend with Mike (Cope), and we wanted to make sure that we got some road course experience so when it comes down to it we can perform on those tracks.”

What are your thoughts on the No. 99 so far and the track here at Sebring?

“It’s not too big like a bus and it actually reacts pretty well, in a similar style of my super late model. It’s a car you can use and it’s very active.”

“I’ve only been on Sebring once before; the testing we did in the rain here was a whole new experience. The track here has some serious speed to it, but it has all kinds of different elements, hairpins and plenty of variety, in that way I really like it. Traffic may be a bit of an issue; but you just have to adjust, use your spotters, your mirrors, trust the car and adjust.”

Keith Prociuk and the No. 9 HP Tuners Chevrolet Corvette

HP Tuners is the industry leader in EFI tuning and scanning for GM, Ford and Dodge powered vehicles. RaceRender and TrackAddict offer PC, OS X, Android, and iOS based apps that are a must have for any racer.

Keith’s career highlights include two Championships in NARRA with a Dodge Viper.

Tony Buffomante and the No. 34 Bestline Superior Lubricants Ford Mustang

Tony Buffomante is a multi-time world and national championship driver from Chicago, Illinois. He has been racing karts, cars and offshore powerboats for over 25 years. Tony's career highlights include Championships in Star Formula Mazda, the SCCA Runoffs, NASA Super Touring and the Factory Five Challenge Series. Tony competed in one Trans Am race in 2013 at Canadian Tire Motorsports Park, winning the pole, setting a new track record, and leading every lap on his way to his first Trans Am 2 victory in his debut race. In 2015, Tony plans a full season effort with MCRE with ambitions of adding another Pro series championship to add to his resume.

Kevin Poitras and the No. 73 Post Plastics Ford Mustang

JJ Haley and the No. 99 BraunAbility Chevrolet Camaro

As the world leader in mobility with over 40 years of experience, BraunAbility understands what you're looking for in wheelchair vans, wheelchair lifts and mobility products. Why? Because they were founded by a man who needed that mobility for himself. Ralph Braun built his company on a commitment to quality, safety, and innovation. He also believed in giving his customers the peace of mind that wherever their travels take them, there's an experienced mobility professional close by. Put your trust in the BraunAbility name and their nationwide dealer network. They're committed to get you where you want to go — today and tomorrow.