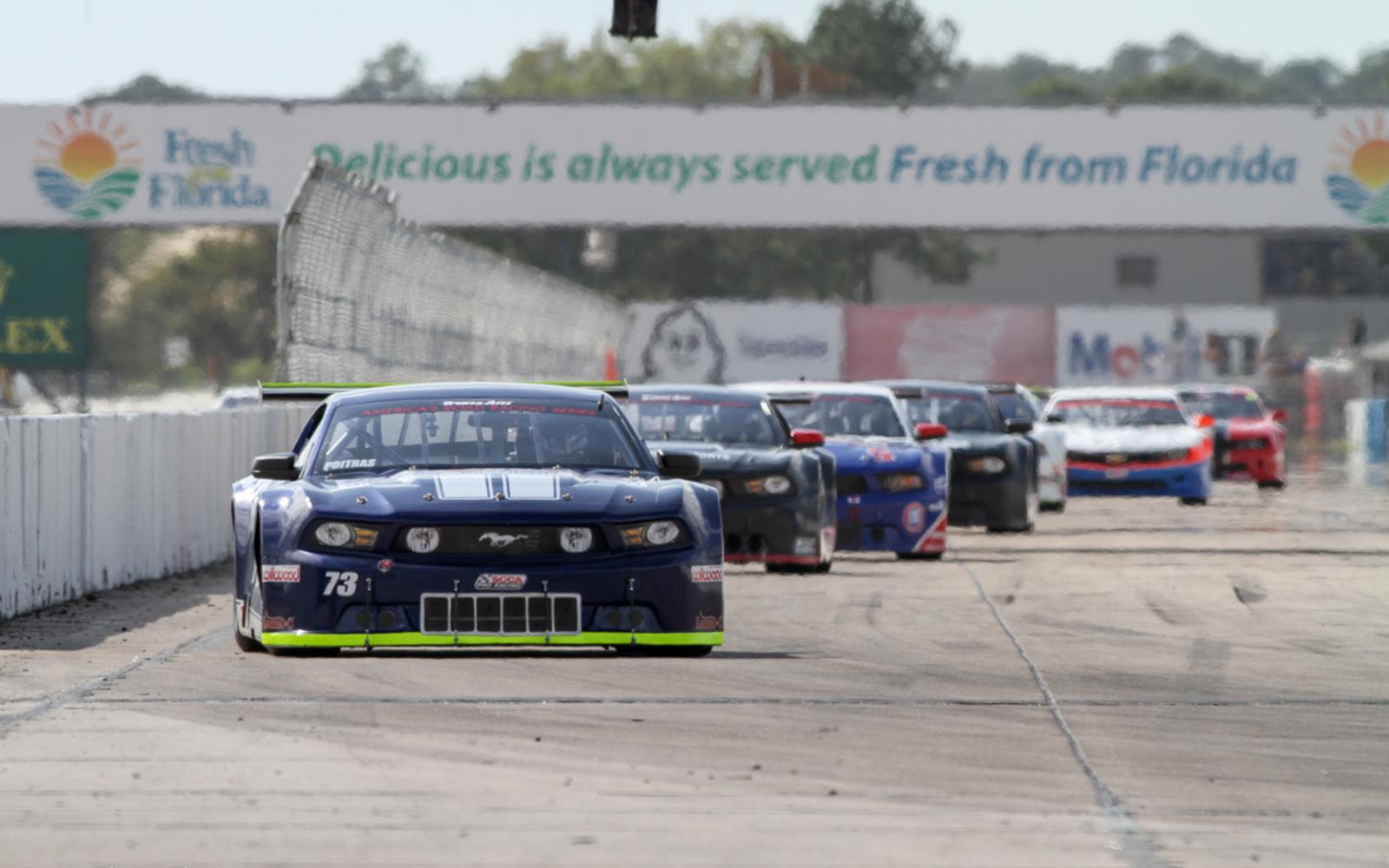 Round 1 of the 2015 Trans Am Championship, The FOAMETIX® Trans Am 100 at Sebring International Raceway 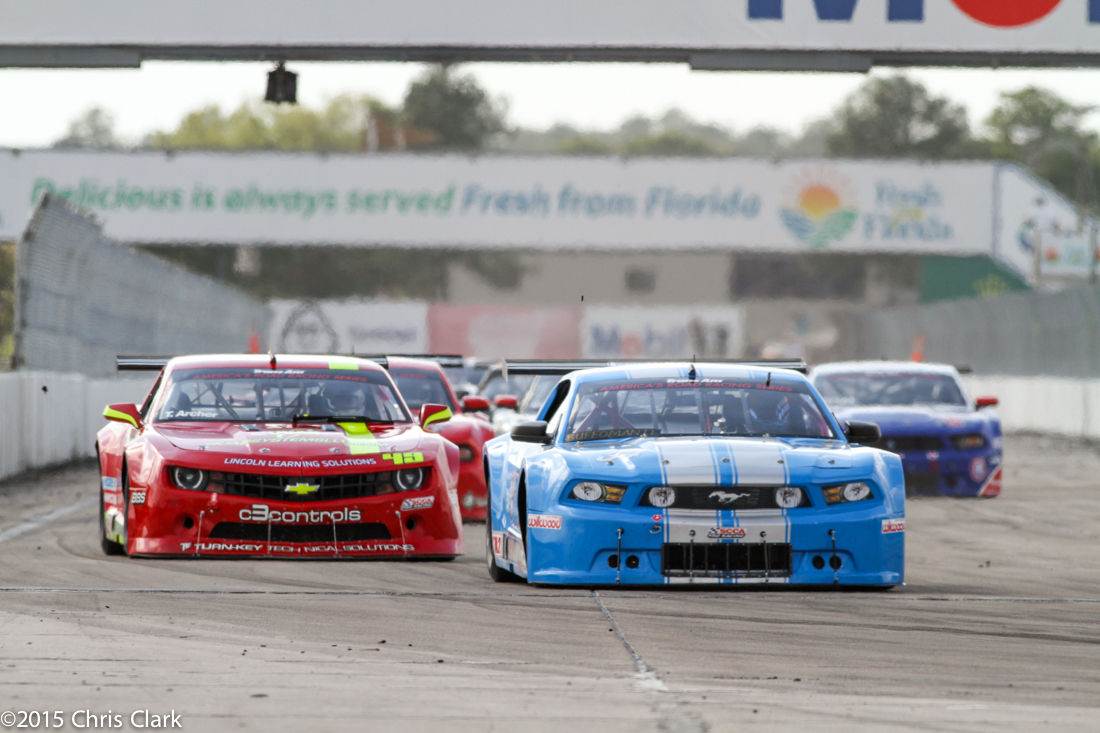 (TEAM RELEASE) CLEARWATER, Fla. (March 3, 2015) – As Round 1 of the 2015 Trans Am Championship, the Foametix Trans Am 100, draws to a close, and t Mike Cope Racing Enterprises(MCRE) heads back to its Clearwater shop, the team can look back with pride on a solid showing in the opening race of the Trans Am season, despite difficulties.

Tony Buffomante began the race with the No. 34 Bestline Superior Lubricants Ford Mustang in second position on the 33-car TA2 grid, despite having his qualifying session cut short by a fuel miscalculation that saw his tank run dry on what would have been his fast lap of the session. Buffomante quickly moved up to first position, overtaking pole sitter Cameron Lawrence immediately. However, Trans Am officials ruled that Buffomante had jumped the start and ordered a drive-through penalty.

“We’re a little disappointed with the decision,” said Mike Cope, Owner of MCRE. “But the call was made and that’s racing. I think if you look back at the race you have to say that Tony was one of the best drivers out there, period. The drive-through set him back to 28th position, from there, despite several laps of yellow, he moved his way up to third position with one lap to go and second place in sight before contact from the 25 car took him off the podium. Tony’s performance was probably one of the best you’ll see all year; it’s just a pity it went unrewarded. But this is the first race of the year, and Tony’s a competitor—I think we can all expect big things from him and the No. 34 throughout the year.”

In light of Buffomante’s hardship, Kevin Poitras, in the No. 73 Post Plastics Ford Mustang, would finish sixth overall, the highest in the MCRE team. He had moved into third position on the final circuit only to be denied a podium finish because of engine problems. However, the weekend was full of strong showings from all MCRE drivers.

“All of our drivers performed well this weekend,” said Cope. “Kevin put on a great show and was really consistent throughout the race; unfortunately, he suffered a few motor issues on the final lap that cost him a podium finish. Keith (Prociuk) performed very well considering this was only his second Trans Am start; he constantly moved up the field and worked his way through a ton of traffic. JJ (Haley) was going up the field as well, but encountered a tough bit of bad luck on the 16th lap that ended his day—he’s a great young talent and despite this being one of his first professional road races, he performed admirably. When you consider the 33-car TA2 field, both Keith and JJ had a real challenge ahead of them, but they proved they’re more than up to the task.”

MCRE was also well represented throughout the TA2 field with Tony Ave, Jordan Bupp, Nick Hazelwood and Dillon Machavern all sporting MCRE chassis. In total, MCRE-produced cars made up over 20 percent of the 33-car field with three qualifying within the top 10—a massive increase considering that only two MCRE cars started the season opener in 2014.

“Our growth is a testament to our product,” said Cope. “We’re confident in the quality of cars that we produce and the continued growth shows that we’re not the only ones that feel that way. We love the TA2 class and are looking to take it by storm. Our goal, as always, it to make Mike Cope a premier name in Trans Am and TA2.”

The MCRE team will now begin preparations for Round 2 of the Trans Am Championship on April 12th at Homestead-Miami Speedway as Trans Am continues its early season tour of the sunshine state.

“We know we have the cars just about where they need to be,” said Cope. “We’re going to get back to the shop and get to work preparing them for Homestead-Miami and Round 2. All our drivers put on a great show at Sebring, and I’m confident their talent will put MCRE on the podium in very short order.”

Keith Prociuk and the No. 9 HP Tuners Chevrolet Corvette

HP Tuners is the industry leader in EFI tuning and scanning for GM, Ford and Dodge powered vehicles. RaceRender and TrackAddict offer PC, OS X, Android, and iOS based apps that are a must have for any racer.

Keith’s career highlights include two Championships in NARRA with a Dodge Viper.

Tony Buffomante and the No. 34 Bestline Superior Lubricants Ford Mustang

Tony Buffomante is a multi-time world and national championship driver from Chicago, Illinois. He has been racing karts, cars and offshore powerboats for over 25 years. Tony's career highlights include Championships in Star Formula Mazda, the SCCA Runoffs, NASA Super Touring and the Factory Five Challenge Series. Tony competed in one Trans Am race in 2013 at Canadian Tire Motorsports Park, winning the pole, setting a new track record, and leading every lap on his way to his first Trans Am 2 victory in his debut race. In 2015, Tony plans a full season effort with MCRE with ambitions of adding another Pro series championship to add to his resume.

Kevin Poitras and the No. 73 Post Plastics Ford Mustang

JJ Haley and the No. 99 BraunAbility Chevrolet Camaro

As the world leader in mobility with over 40 years of experience, BraunAbility understands what you're looking for in wheelchair vans, wheelchair lifts and mobility products. Why? Because they were founded by a man who needed that mobility for himself. Ralph Braun built his company on a commitment to quality, safety, and innovation. He also believed in giving his customers the peace of mind that wherever their travels take them, there's an experienced mobility professional close by. Put your trust in the BraunAbility name and their nationwide dealer network. They're committed to get you where you want to go — today and tomorrow.