AUSTIN, TEXAS (8 November 2020)- Rafa Matos took the lead from Cameron Lawrence on the 10th lap of the Trans Am Series presented by Pirelli TA2® race and pulled away on a late restart to claim his first victory of 2020 in the No. 7 Silver Hare Racing Chevrolet Camaro on Sunday. Matos, the 2018 TA2® powered by AEM champion, won under caution over Lawrence in the No. 8 3-Dimensional Services Group Ford Mustang, scoring his 10th career victory.

It was a big day for the first-year Silver Hare Racing as team principal Maurice Hull finished 15th in the No. 57 Camaro, winning the Masters class. (Based on provisional results) 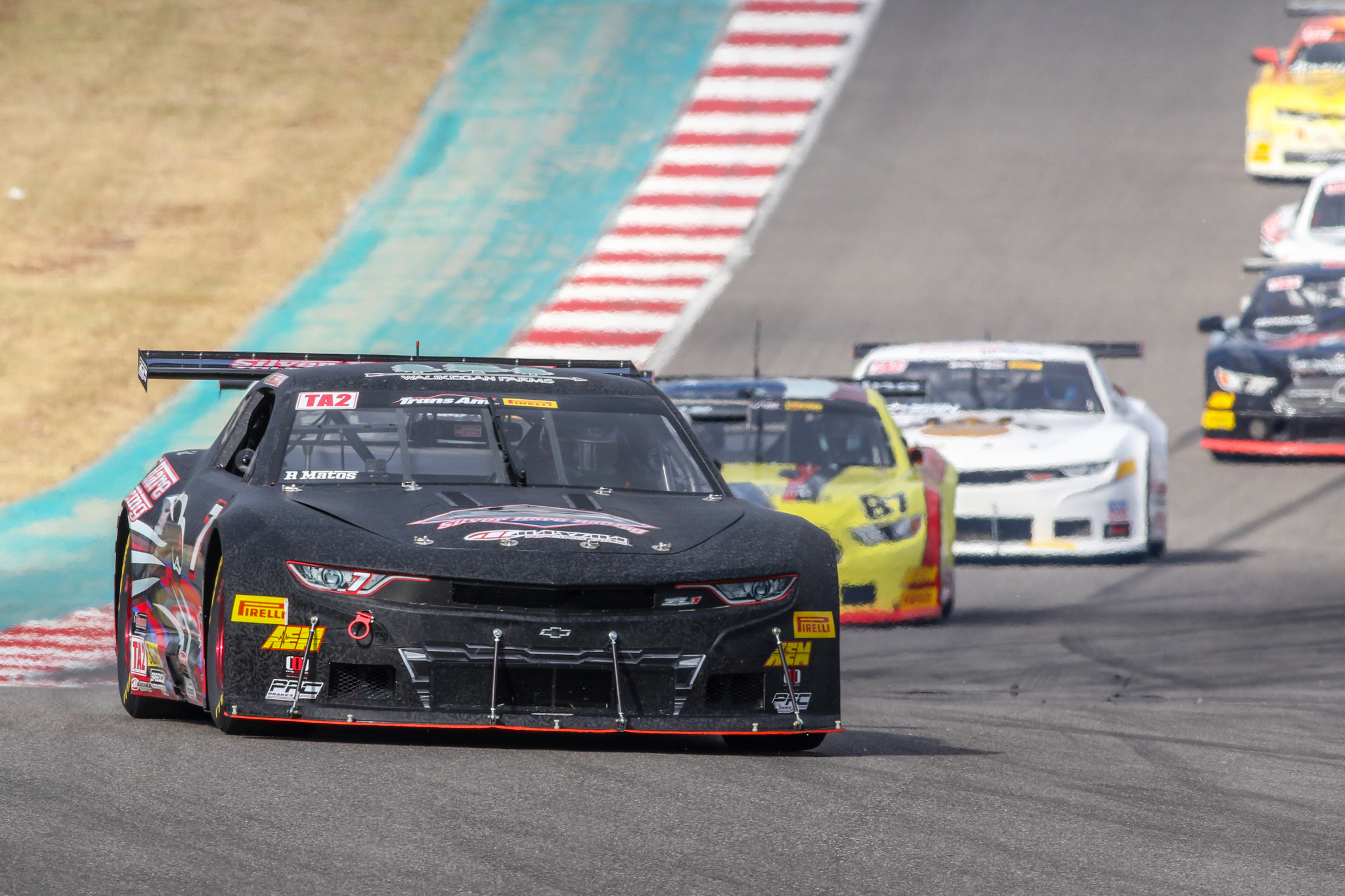 “Today was a hard one,” said Matos. “My cool suit wasn’t working before the race, and it was really hot, especially when we were stopped in the pits. But I had a really good car, with really good balance. We were able to pull away on the restarts. I felt we had the pace all weekend, but we missed a little bit yesterday in qualifying. This is a really proud moment for our young team.”

Matos went from third to first at the green flag, but Lawrence went to the front by the end of the lap.

The race was green for only one minute when Elias Anderson spun in the No. 31 AccioData/Sampsonn Race Engines Mustang, bringing out the caution. An incident on lap 6 involving the No. 23 Cobra Automotive Mustang and the No. 63 Nelson Motorsports Mustang resulted in the second caution.

Lawrence took the lead on a restart, but lost it to Matos two laps later. With 37 minutes remaining, Doug Winston hit and damaged the wall in Turn 19, resulting in stoppage of nearly 20 minutes to repair the wall.

Matos got a great jump on the restart, while Skeen had a great battle with Lawrence for second before an incident brought out the fourth caution with only 5:30-seconds remaining, effectively ending the race.

"I’m really happy to be on the podium this weekend,” Lawrence said. “The start of the race went pretty well for us. We had a really good car early. We had some front-end damage that hurt us later with understeering. Thought we had something for Rafa (Matos). He's been fast all weekend. Maybe if we had a long run would have helped Mike (Skeen) and I. It was a pretty crazy at the start, but we are happy to be on the podium with a car that's pretty much in one piece for Road Atlanta.” 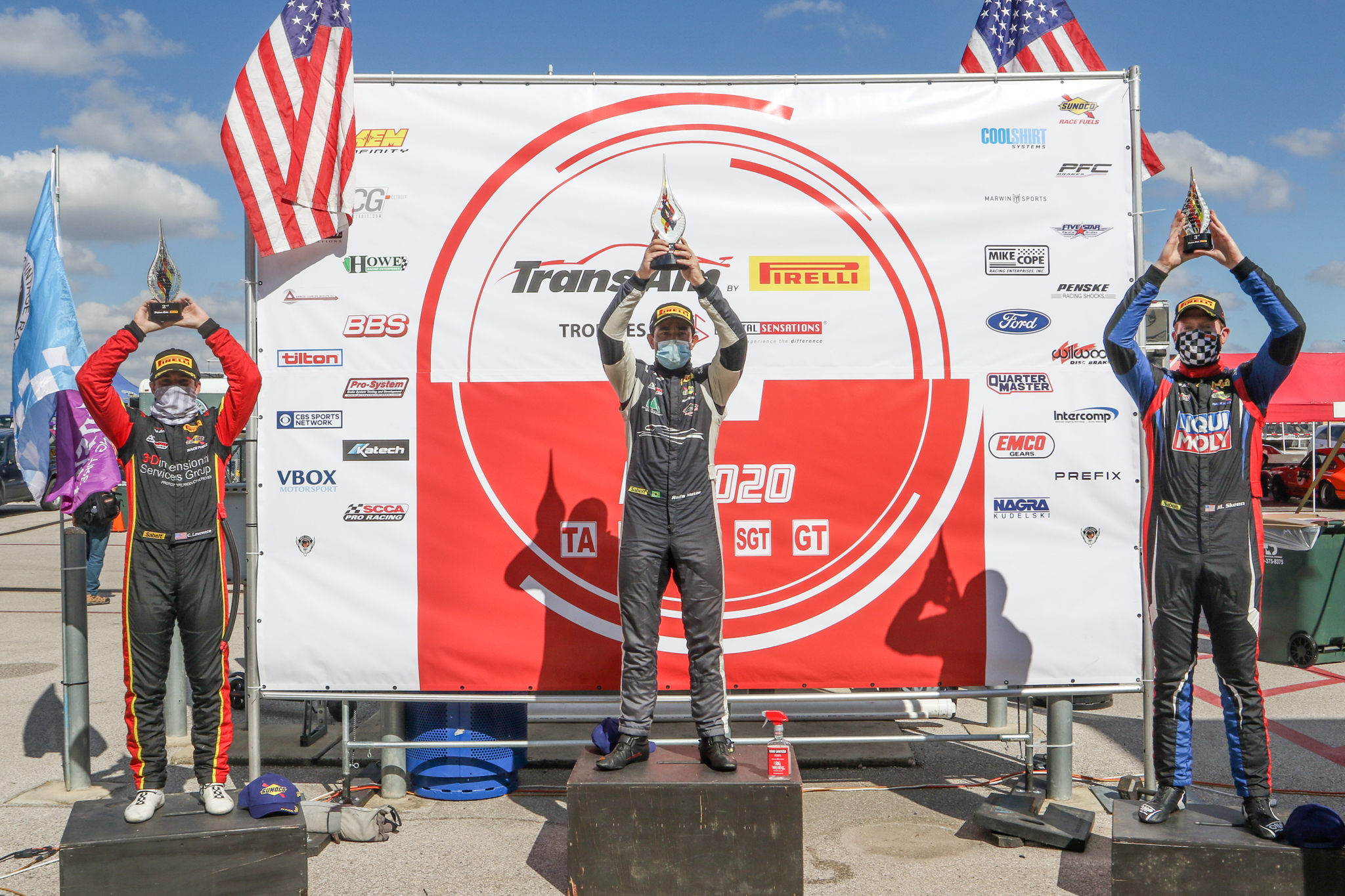 Championship-leader Skeen finished third in the pole-winning No. 77 LiquiMoly/Turn 14 Ford Mustang. Not content to “points race,” Skeen failed to lead a lap but made several aggressive moves to improve his position, finishing the race with damaged rear bodywork.

"We got hit right off the start a couple of times and we were just trying to keep it on the track and make sure we collected points today,” Skeen said. “We knew these guys had great pace today. Unfortunately, we just didn't get enough green flag racing today. We had a great car at the end. If we had a few more green flag laps we could have fought for it a little bit. Big congrats to Rafa (Matos). He's had a huge pace all weekend. He was definitely the guy to beat this week, and congrats to Cameron (Lawrence) we had a great battle at the end there as well.”

The late caution failed to help Scott Lagasse Jr. Starting at the back of the field due to being late for the grid, Lagasse charged all the way up to fourth in the No. 92 M1 Racecars Camaro. An extended caution/black flag/red flag for wall repair allowed the Floridian to close in, but he had nothing left for the top three on the restart with 14 minutes remaining but still won the Cool Shirt Award for his efforts.

“It was tough having to come from the back, and I had to use up my equipment more than I wanted to,” Lagasse said. “This has been our worst race track, so I’m feeling pretty good right now.”

When Keith Prociuk found himself unable to compete with a migraine headache on Sunday morning, Boris Said was pressed into service to drive the No. 9 HP Tuners/Mike Cope Race Cars Ford Mustang. Prociuk qualified 10th, with Said moving to the back of the 28-car TA2® grid.

Said followed Lagasse through the pack, eventually finishing ninth in the borrowed car.

IndyCar veteran Paul Tracy raced near the front in the No. 87 3-Dimensional Services Group Camaro. He was fourth after the opening lap but admitted flat-spotting his tires early on. He raced in contention throughout the event before pitting with a cut right-front tire under the final caution, finishing 16th.

Michele Abbate scored her first career victory in Trans Am Series presented by Pirelli West Coast Champiomship victory in the No. 30 Grr/ Scosche/ PRYDE/Scrubblade Camaro, passing two cars in the closing laps. After getting by Jim Gallaugher in the No. 16 Madison Development/Mike Cope Mustang to take second, Abbate gained the lead when leader C.J. Cramm went off in the No. 04 Cedar Creek Energy Camaro, bringing out the race-ending yellow.

The victory was a history making moment for the TA2® as Abbate is the first female to ever score a win the class. Abbate now leads the West Coast TA2® points championship heading into the final round of West Coast competition. 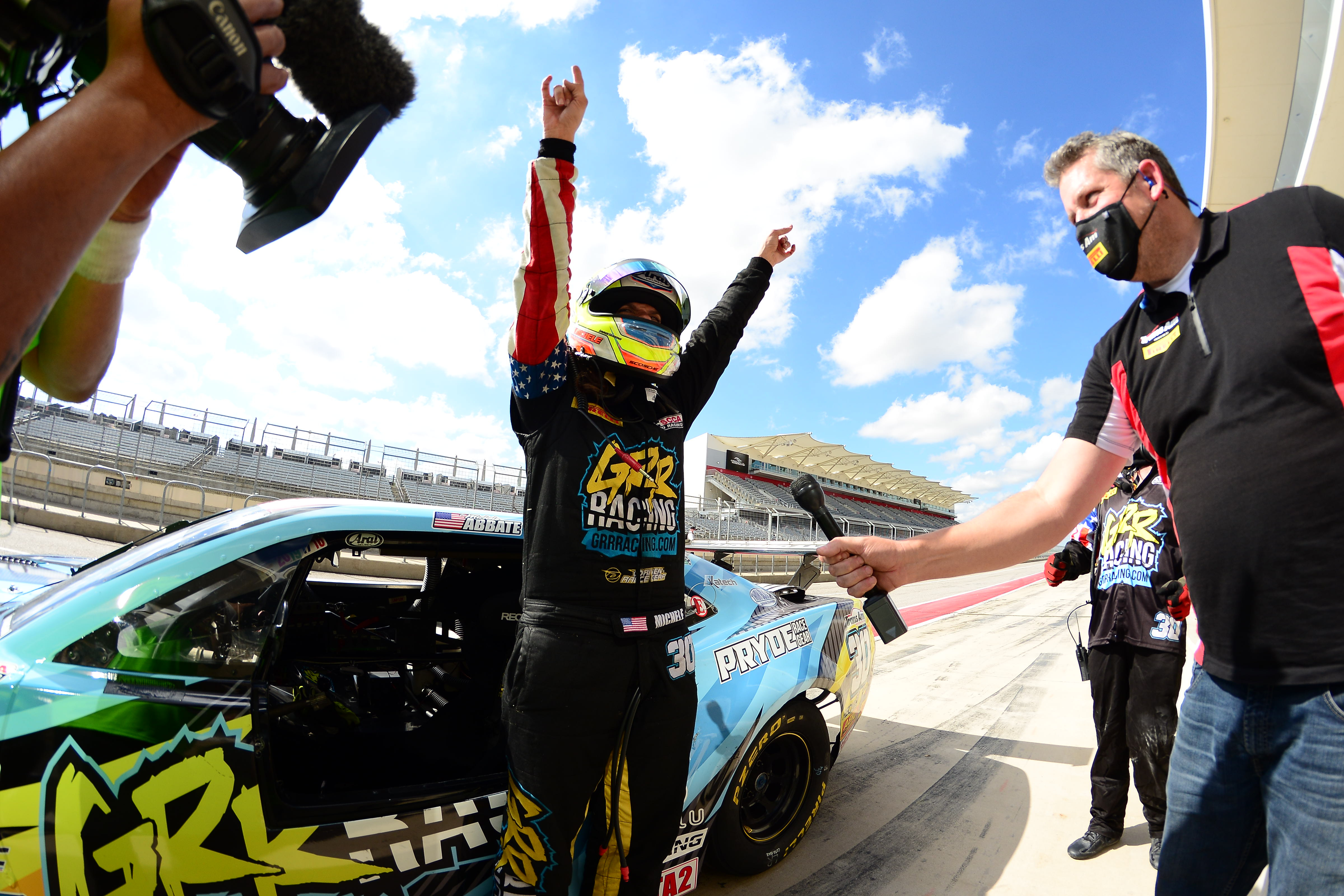 “I’m so pumped right now,” said Abbate, who is coming off her first career podium at Sonoma. “That was an insane race, and we’re supposed to have a battle, because I didn’t want to get it just by showing up. Jim (Gallaugher) put down some great laps and we had an awesome race. When I saw him spin, I knew I had to capitalize on this. I knew it was going to come – I just didn’t know it was going to be today.”

Trans Am will have a short break before returning to racing November 20-22 for the rescheduled rounds at Michelin Raceway Road Atlanta. Race Replays from Sunday’s feature at CoTA are available on the Trans Am by Pirelli Racing App: https://nagrasports.app.link/lIQjdAuxq7 All results from the TA2 are still provisional.