Lux Performance Group Back On The National Stage

(Team Release) - Aloha, Oregon, February 13, 2015 – Lux Performance Group was last part of a national touring group in 2012. Weekly shows before packed crowds took their toll and the Oregon-based company returned to the Northwest to focus on local displays of perfection. Now, the three-year hiatus will come to a dramatic end as an exciting new season will see road racing star Cindi Lux (Aloha, Oregon) lead a band of professionals back to the national stage including a debut performance in one of the industry’s oldest venues, Trans Am.

Lux Performance Group, LLC, a leading motorsports and automotive preparation shop in the Northwest with a long history of championship winning race programs, will take an exploratory step back into professional motorsports with a two-car program in four Trans Am Series races beginning in April at Homestead Miami Speedway. Additionally, the team’s pair of Dodge Viper ACR-X will contend for top honors in several of the Sports Car Club Of America’s (SCCA) major events including the June Sprints at Road America. Team lead and veteran road racing champion Cindi Lux will pilot one of the V10-powered American supercars while up-and-coming driver Steve Streimer (Sherwood, Oregon) will get his first taste of east coast racing in the other. 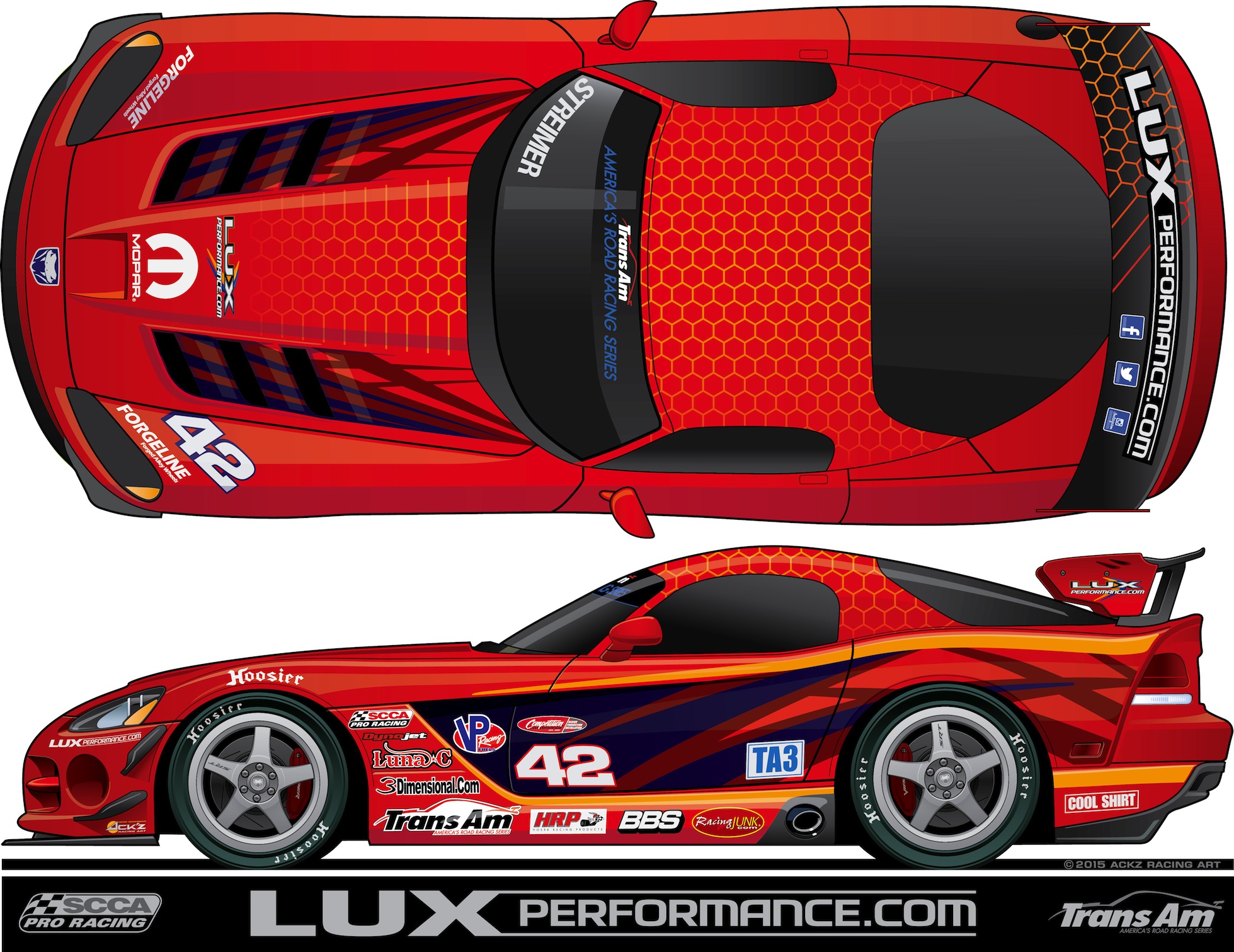 The Trans Am Series provides an ideal platform from which to “dip a toe” back into professional motorsports. Lux Performance will use as many as four races in the Trans Am 3 (TA3) class to acclimate itself to the higher-level of competition. The intent is to use this a launching pad to a full season campaign for both Lux and Streimer in 2016.

Lux herself last competed regularly on a national level in 2008. The 12-time road racing champion raced in the Pirelli World Challenge GT class running a Dodge Viper Competition Coupe for Mopar. In two years at that level, Lux had five top-ten finishes with a career high finish of fifth. The year prior, as a Dodge factory driver, she debuted the Viper “Comp. Coupe” in the American Le Mans Series.

While the schedule could expand based on funding and other factors, Lux Performance Group’s 2015 schedule calls for it’s first race at Homestead on April 12 followed by either the Trans Am feature at Road Atlanta or the SCCA Majors at the Mid-Ohio Sports Car Course on May 31. Cindi Lux is a two-time winner of the prestigious June Sprints at Road America and will be seeking her third title there, Streimer his first, on June 15. The two-car Viper effort will celebrate Independence Day at Brainerd International Raceway with Trans Am on July 5. Currently, the strategy also has the team concluding the season at Road America on August 29 with Trans Am when the NASCAR Nationwide Series competes there. A handful of races in the Northwest region is also under consideration but not yet finalized.

Quotes
Fred Lux, Lux Performance Group Team Principal: “The Trans Am Series has such a long history and it is about time the Lux name is a part of it. To me, the most appealing aspect of any professional series is a stable rules platform. Having rules that don’t change from race to race is critical and that increases my confidence they are serious about cost containment. I have been a crew chief in seven different professional series and I’ve seen the good, the bad and the ugly! As always, we’ll be coming with full-on Lux style!”

Cindi Lux: “Getting back behind the wheel of a Dodge Viper ACR-X is kind of like putting on an old shoe. Even though I haven’t been racing a Viper full time the past few years, never fear, these cars are fantastic and a blast to drive. Trust me, every time I drive a Viper, I just smile. It’s also kind of cool being a ‘rookie’ in the Trans Am series. I’ve enjoyed running on many other professional series but nothing with so much rich heritage and history. You look at the names in the series now and you reflect on the names over the decades and it is so humbling to even think about! This is some good competition! The best part is that we are coming at it the right way, the Lux Performance way. This is the first move in a long-range chess match that we are all very excited about.”

Steve Streimer: “I can't wait to get into this season with the Dodge Viper! This will be a whole new world for me and I am looking forward to the challenge. The Trans Am races are significantly longer than what I am accustom to so when I think about the task ahead, patience comes to mind. With the longer format it will be all about staying out of trouble and keeping myself in a position to take advantage of opportunities. Making the kind of leap I’ll be making with Lux Performance into the Trans Am championship is going to be intense! But I look forward to wrestling with this snake around some of the greatest racetracks in the country!”

About Trans Am – The Trans Am Series, America’s Road Racing Series, began igniting the passion of motorsports fans across the world in 1966 and has been home to some of the greatest names in road racing. Today, Trans Am continues to honor its legacy, while challenging the status quo in racing, through meaningful racing platforms and a driver-oriented focus. The Trans Am Series is operated by The Trans Am Race Company, LLC (TARC), through a five-year agreement in which TARC oversees the management and marketing of the Trans Am Series. SCCA Pro Racing sanctions Trans Am events and provides operations services to the Series.

See more about the Lux Performance Group’s 2015 season at https://www.youtube.com/watch?v=-PDB6AF90Gc&feature=youtu.be