HISTORY MADE: Grr Racing’s Michele Abbate Becomes First Female to Ever Finish on the Podium in Trans Am TA2

With only a few weeks notice Trans Am announced that the West Coast Championship presented by Pirelli would have it’s first double header weekend at the historic Sonoma Raceway in California.  Due to the cancellation of the Portland round this would allow for no races of the 2020 season to be compromised.

Michele Abbate went into the weekend tied for 3rd in points for the championship.  On Friday the team had 1 practice session and qualifying.  Abbate was able to put down her personal best lap time of a 1:41.6 qualifying her in the top 5.  “We are still learning so much about these cars and I am just doing the best I can to improve my efforts behind the wheel, both on and off the track, I am very proud of where we are at,” Michele shared.

Saturday’s race was scheduled for 1:30pm, and there was only a 10-15% chance of rain in the forecast.  The Grr Racing team came prepared with their rain tires, but, not one team was concerned about it coming down.  As the cars lined up on grid there was a slight mist.  As the two parade laps were completed, the field took the green but just 3 laps in, the sky opened up and it started to come down. 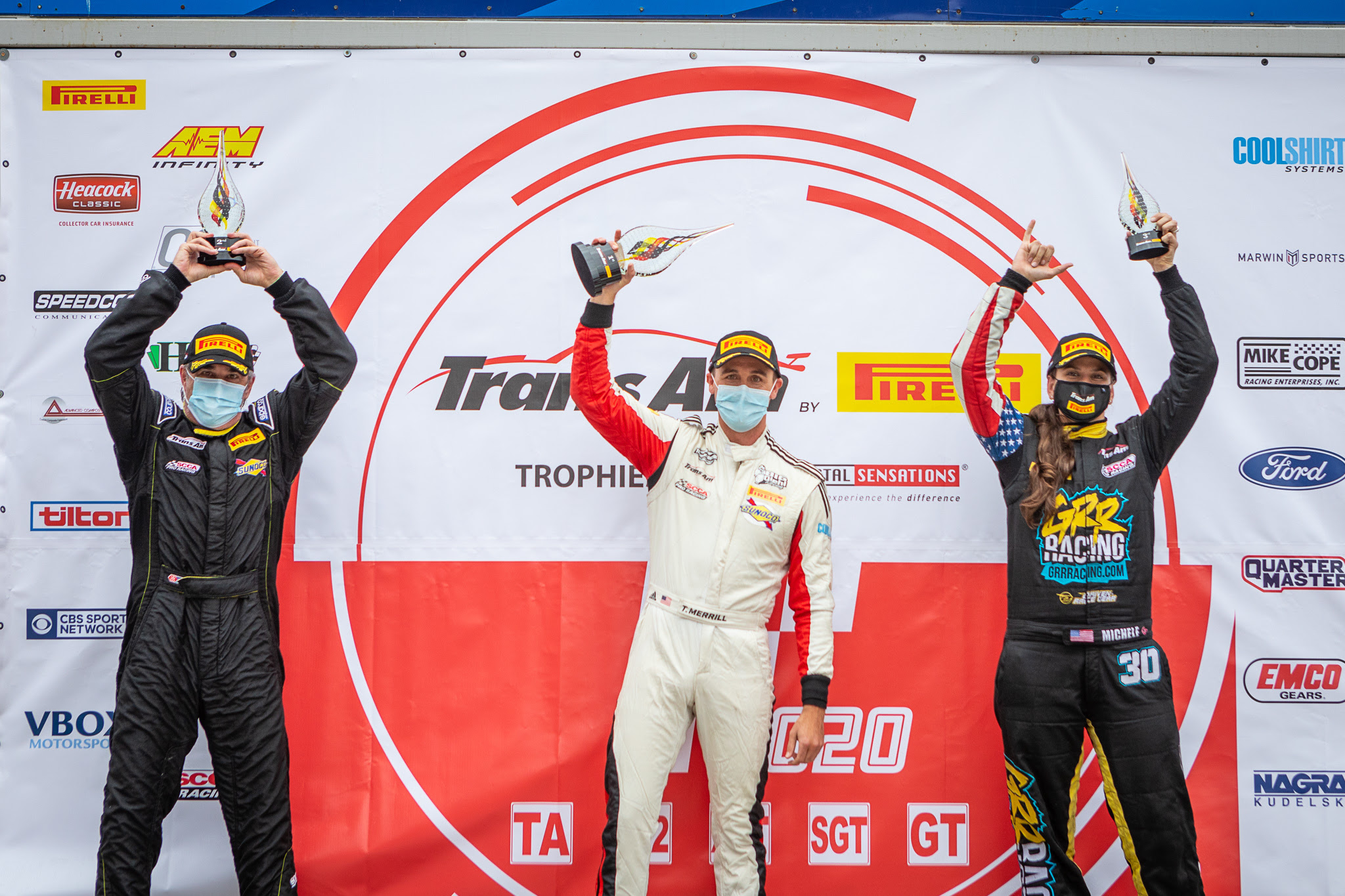 Abbate gained 1 position off the start into turn 2, and found herself in 4th place, but as the rain started to get heavier, braking points on the track changed rapidly.  As she head into turn 11 with 3rd and 2nd place just ahead, she was forced to dodge the rear end of the #33 car who got into the back of the #17.  She came up clean on the inside of 3rd, and then 2nd place spun out on the exit of the corner due to the abruptly slick track.  “It was crazy, in an instant the track conditions changed drastically and as I adjusted I found myself getting closer and closer to the lead.  I absolutely love racing in the rain, my first time here [at Sonoma] it was pouring rain and I won my race, so I really have taken a liking to racing in the rain”, Abbate said.

The caution came out and Abbate was 2nd in class and P3 overall, still on slicks.  As the caution stayed out, the two cars ahead of her came in for rain tires.  “The leaders pulled off, and there I was leading the field P1 overall, it was almost like ‘should we go in too?’ but we just didn’t think there was enough rain to take the chance”, Abbate shared.

The green flag dropped and Abbate led a few laps overall, but then the guys who pitted for a rain tire switch began catching up.  “At that point we knew we wouldn’t be able to compete with anyone on rains, but, it was a good call because the track began to dry up towards the end of the race,” Crew Chief Anthony Philleo shared.  Abbate battled the wet conditions with throttle control, patience, and a positive outlook.  By the last 3 laps of the race the majority of the track was dry,  and Abbate made history as she crossed the finish line with her 3rd place finish in the TA2 class!

“Such an amazing way to get my first podium in TA2!  I had so much fun and learned so much - this was my first time driving any type of tube chassis car in the rain and it did not disappoint!  Extremely challenging conditions and I know Anthony made an awesome call to stay out on our slicks.  Pretty cool to be the only TA2 car on the podium on slicks!  So pumped to have put our Scrubblade wiper to good use out there too, always love a good rain race!”  Michele said with a huge smile on her face.

As officials tallied up the official results, Abbate became tied in points for first place in the West Coast Championship.  “We are beyond proud to have tied for 1st in points for the 2020 Championship, we put everything we have into this and it is showing,” Anthony said.

Lap times from the race set the grid for Sunday’s line up and Abbate improved her position by one spot, putting her in the 4th place position.  The team knew that points are critical and finishing the race is most important for their plans.  When the field took the green flag on Sunday, Abbate held onto her 4th place spot as she chased the leaders.  The 5th place car got around her, but was laying gear oil all over the track,.  Michele radio’d in complaining that she couldn’t see out her windshield because of it.  An on track incident put the race into a full course yellow, and eventually into a full course black flag.  As the field came into park in the hot pits, teammate Savanna Little was able to clean off Abbate’s windshield before they got back on the track.

Once the cars were flagged to get back on track, they made their way to take another green flag.  At the drop of the flag one of the competitors got a jump on the start getting ahead of Abbate.  She spent the next 8 laps behind a slower car that did everything he could to avoid a pass.  With a slip up he made out of the exit of turn 10 Abbate was finally able to drive away, but the delay caused her to lose sight of the leaders.

By the last 10 laps of the race, Michele was catching sight of the 4th place car, but didn’t quite have the speed to challenge him.  She secured another top 5 finish with her 5th place finish at Sonoma and officially sits 2nd in points for the Trans Am TA2 West Coast Championship!

An amazing weekend breaking barriers and making history, the Grr Racing team wants to thank all their partners who have made this possible.  “Our new PFC Brakes and Joe’s Racing hubs have made all the difference between this season and last season.  Michele has more confidence in the car and that is allowing her to make huge strides of progress.  Our Katech motor stays strong and our car is protected by only the best from Lucas Oil,”  Anthony shares.

The team will continue their pursuit of the West Coast Trans Am Championship as they head to the next round at Circuit of the America’s which is scheduled for November 6-8th.  The last two remaining rounds of the championship will be broadcast live from COTA and Laguna Seca as they the National Tour and can be watched from the Trans Am App available on apple and android devices. 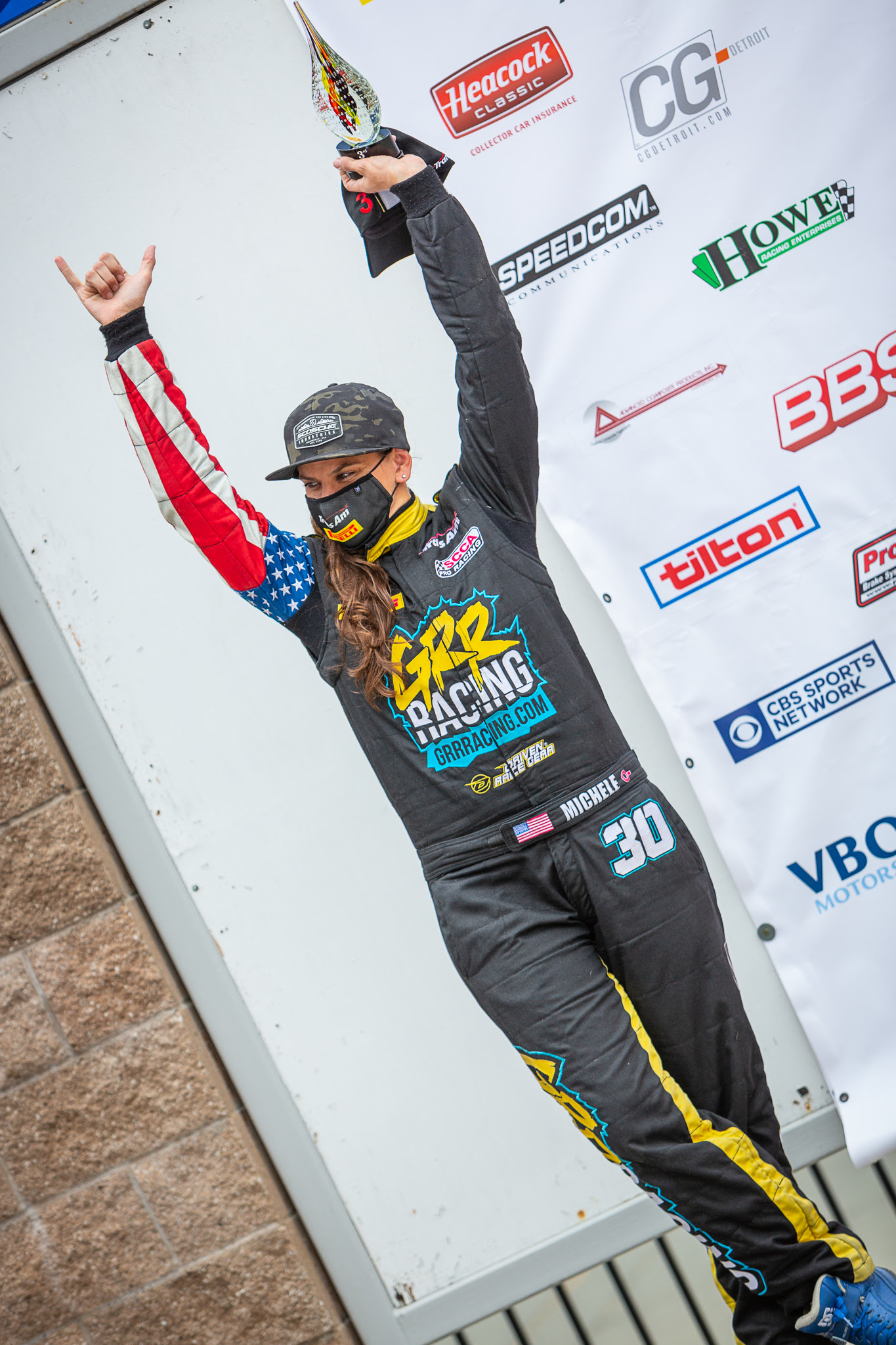