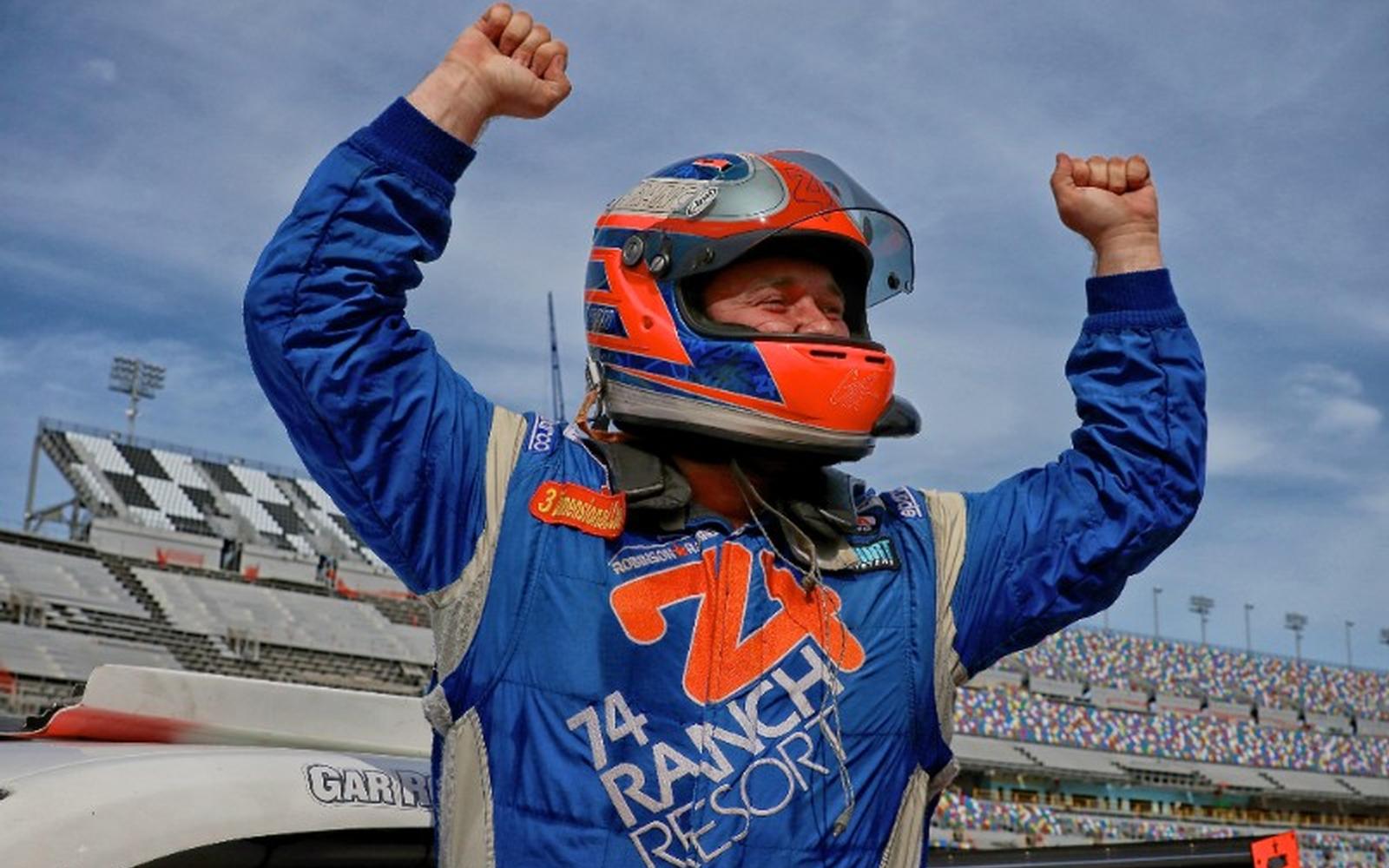 TEAM NEWS: In his first year in the Trans Am Series, Gar Robinson raced to the pinnacle of the TA2 Class, winning the 2015 Trans Am Championship and earning the 3-Dimensional Services Trigon Trophy. After clinching the coveted win at Daytona International Speedway last Saturday, he was formally presented with the Championship and Rookie of the Year awards during the Trans Am Year-End Gala, held on Sunday, November 15, 2015, at the Hilton Daytona Beach Oceanfront Resort.

Driving the No. 74 Chevrolet Camaro sponsored by 74 Ranch Resort, Robinson came into the Bullet Liner Championship Weekend at Daytona in second place in the points standings, with the third place driver, Adam Andretti of ECC Motorsports just a handful of points away. The two Camaro drivers proceeded to engage in a continuous jockey for position, lap after lap in Saturday’s Daytona race, with pole sitter Tony Buffomante also mounting an aggressive charge through the course in his Ford Mustang. In the end, Robinson made a bold, courageous move with just two laps to go, cleanly passing Andretti for the lead, going by the white flag, and then taking the checkered flag.

“I really didn’t think we’d have a Championship so soon. Right before I started racing in Trans Am, my buddy and I would fantasize about how we were going to learn what it took to win the Championship,” noted Gar Robinson. “I think in 2015, we really showed the strength of our team. This team has more than 50 years combined in motorsports, working with some of the biggest names in the business, so my performance was crucial.”

The race weekend began with three test sessions on Wednesday and a 30-minute practice on Thursday, ahead of the Fast Five Qualifying session in the late afternoon. Robinson qualified in fifth with Shane Lewis in third, just .551 of a second off the pole. Friday’s schedule had only a short practice session and a drivers’ meeting, as the teams prepared the cars one final time before the race on Saturday morning. The green flag dropped just after 10:30 am ET under perfect blue sky conditions.

“To win a Trans Am TA2 Championship has been a lifelong dream of mine,” stated George Robinson, Gar’s father and team owner. “I was unable to get close to a Championship when I raced in Trans Am so getting the top spot for Gar is ever so sweet. As a father, seeing my son succeed is great, but more importantly, to see him make great friends in racing and be liked by many is very gratifying.”

“The biggest value of this year for me was the close friendships that I made. I look at my dad and see all of the guys he hangs out with at the race track; they are all friends that he met racing in Trans Am,” reflected Gar Robinson. “I know that the people I meet here will be friends I will most likely have for the rest of my life.”

Once Gar Robinson finished third at Circuit of The Americas, Round 11 of the Season, he earned the most points overall among the first-time racers in the Series, and his Rookie of the Year status was confirmed going into the final race at Daytona. He was awarded two impressive trophies for the Rookie of the Year honor at the Trans Am Year-End Gala on Sunday, which were sponsored by Wilwood Disc Brakes. Robinson’s teammate Lewis, also a rookie in the Series, finished in second place in the points standings.

The win at Daytona became Gar Robinson’s third win of the year in the TA2 Class; he had also collected the winning trophy at Mid-Ohio Sports Car Course in August and again at NOLA Motorsports Park in October. He kicked off the year with a second place finish at Sebring International Raceway in March, and went on to nab an additional second place trophy at New Jersey Motorsports Park, with third place finishes at Road Atlanta, Brainerd International Raceway, Road America and Circuit of The Americas. In total, Robinson made an impressive nine podium appearances in 12 Trans Am events in 2015.

Robinson plans to return to the Trans Am Series in 2016 to defend his title and continue honing his skills behind the wheel of the No. 74 Chevrolet Camaro in the TA2 Class.

“Next year, the competition will grow and the road will get harder, but it will only make me better as a driver,” noted Gar Robinson. “It still means we will make every effort to try and win the Championship again.”

His teammate Lewis also will return to drive for Robinson Racing.

“I am so incredibly happy for Gar! He has done an amazing job all year long. He drove with more skill and determination than anyone could have known,” noted Lewis. “Wow, what a team. Every person on the Robinson Racing crew has worked tirelessly for this Championship win to happen. I am so proud to be a part of this organization.”

In the No. 72 Chevrolet Camaro sponsored by 74 Ranch Resort, Lewis had three podium finishes this year and won the 3-Dimensional Services Group Triple Shot Showdown in the TA2 Class in August. He finished fourth in the overall points standings for the TA2 Class. Lewis claimed the pole position at NOLA Motorsports Park and qualified in the top 5 in 10 of the 12 races this year.

Race fans can catch all the excitement from the Trans Am Series finale at Daytona on television next month. The Bullet Liner 100 held at Daytona International Speedway will air on the CBS Sports Network on Sunday, December 6, 2015, at 1:00 pm ET.

Pictured Above: Gar Robinson takes the win at the final race of the Trans Am season, the Bullet Liner 100 at Daytona International Speedway. Tony Buffomante placed second with Adam Andretti in third.