INDIANAPOLIS, Ind.  [June 17, 2017] – Ernie Francis Jr.’s winning streak stretched to four in a row today at Indianapolis Motor Speedway (IMS), as Francis capitalized fully on the moment, capturing the TA class win in the first appearance by the Trans Am Series presented by Pirelli on the hallowed Indiana track. Mark Boden, in TA3, and Andrew Entwistle, in TA4, also made their own respective history with class wins in the 35-car multi-class filed.

For Francis, bringing the No. 98 Buoniconti Fund Ford Mustang into the victory circle marks the 27th win of his Trans Am career, across all classes, and continues his climb atop the all-time win list—now holding fourth overall.  Still, the feat of capturing a win at IMS stood as the highlight for Francis.

“It’s really incredible to be here,” said Francis.  “We’ve been breaking past records in Trans Am; it’s nice to be able to set the first record here—winning the first Trans Am race here at Indianapolis Motor Speedway.  It’s just incredible.  The guys did a great job on the car all weekend; the car was on rails.   JRi Shocks set up the car perfectly. The EMCO gearbox was flawless all race, and our Katech Engine gave us the power we needed.  I can’t thank our partner, the Buoniconti Fund, enough.  They did a great job pushing us to this race and throughout the whole season; we’re looking forward to the next race, trying to continue the streak.”

Francis began the race on pole, set the fast lap of the race, a 1:27.814 around the on 2.439-mile Grand Prix course,, and led every lap of the race.  However, the start of the race required a bit of trickery and skill on the part of the 19-year-old driver.

“In the beginning it was a little difficult,” said Francis.  “ I knew Vinnie had the legs on me down the front straight, so at the start I knew he was going to be strong on the outside outside row. So once he got by I just put the pressure on that first lap.  I knew if I showed the nose enough he would make a little mistake so I could sneak by.  Once we were by it was pretty smooth sailing. We just avoided the traffic as best we could safely and held on to the end.”

Finishing in second place in the TA class was David Pintaric, in the No. 57 Kryderacing Cadillac CTS-V, tying a career-best finish while securing his eighth Trans Am podium.  Pintaric started up in fourth position before falling back to fifth on lap 14; however, the No. 57 continued to climb throughout the race, eventually capturing second on the 33rd lap of the race, a position he would hold until the competition’s conclusion.  For his efforts Pintaric was awarded the COOLSHIRT Systems Cool Move of the Race.

Capturing the final spot on the TA class podium was Vinnie Allegretta, driver of the No. 41 TA Sights & Sounds Chevrolet Corvette, completing an up-and-down session for the No. 41—Allegretta’s second consecutive podium finish and third of the year.

Allegretta began the race in second position and was the primary challenger to Francis’ position during the race; however, the No. 41 was judged as having passed two lapped cars under a local caution and was assessed a drive-through penalty moving him back to eighth position on the 23rd lap. What followed was a sprint through the TA ranks, moving up to fourth position on lap 28 and his finishing position, third, on lap 33.

In TA3, Mark Boden captured his second win of the 2017 season from behind the wheel of the No. 46 Fall-Line Motorsports/ Calypso Porsche 911 GT3 Cup, starting on pole but electing to take a more patient approach.  Boden would run third for most of the first half of the race before moving into first on the 27th lap, holding the position for the remainder of the race.

“We had a lot of good drivers out here,” said Boden.  “And it produced some great competition, especially early on.   I decided to let the race come to me. Having raced here before, I knew what a long run can do to a car, the tires and the brakes; and the plan played out this time.  Thanks to the Fall-Line crew, we were fast off the trailer, never had a hiccup, never fell off much—it was just very consistent and very good.  The Pirelli tire is a great tire and took everything we could give it. This win is huge for me.  I’ve had the same screen saver of me kissing the bricks since 2013; now I finally get to have a new one!”

Boden was joined on the podium by his teammate Tom Herb, in the No. 16 Fall-Line Motorsports/ Calypso Porsche 911 GT3, giving Fall-Line a one-two sweep of the top steps and Herb his first career podium.   For their efforts the Fall-Line Motorsports team was named the PitBoxes.com Crew of the Weekend while Crew Chief Tom Burek was named the TraqGear Crew Chief of the Race.  Boden was quick to praise the team.

“There’s no quit in these guys,” said Boden.  “They came to the track extremely prepared, and you could see that from the beginning.  Everyone’s setups were diabolical, and ours were spot on.  There wasn’t any need to make any major changes— just minor tweaks and turning a few dials.  They had everything spot on from the start.”

The TA3 podium also featured Conor Flynn, in the No. 95 Irish Mike’s Automotive Porsche 997, the eighth top three finish of his career.  Tim Kezman, also of the Fall-Line paddock in the No. 4 Fall-Line Motorsports/ Calypso Porsche 911 GT3, would finish fourth while Trans Am first-timer John Buttermore, in the No. 53 Carbotech/Stoptech Chevrolet Corvette, completed the top five. 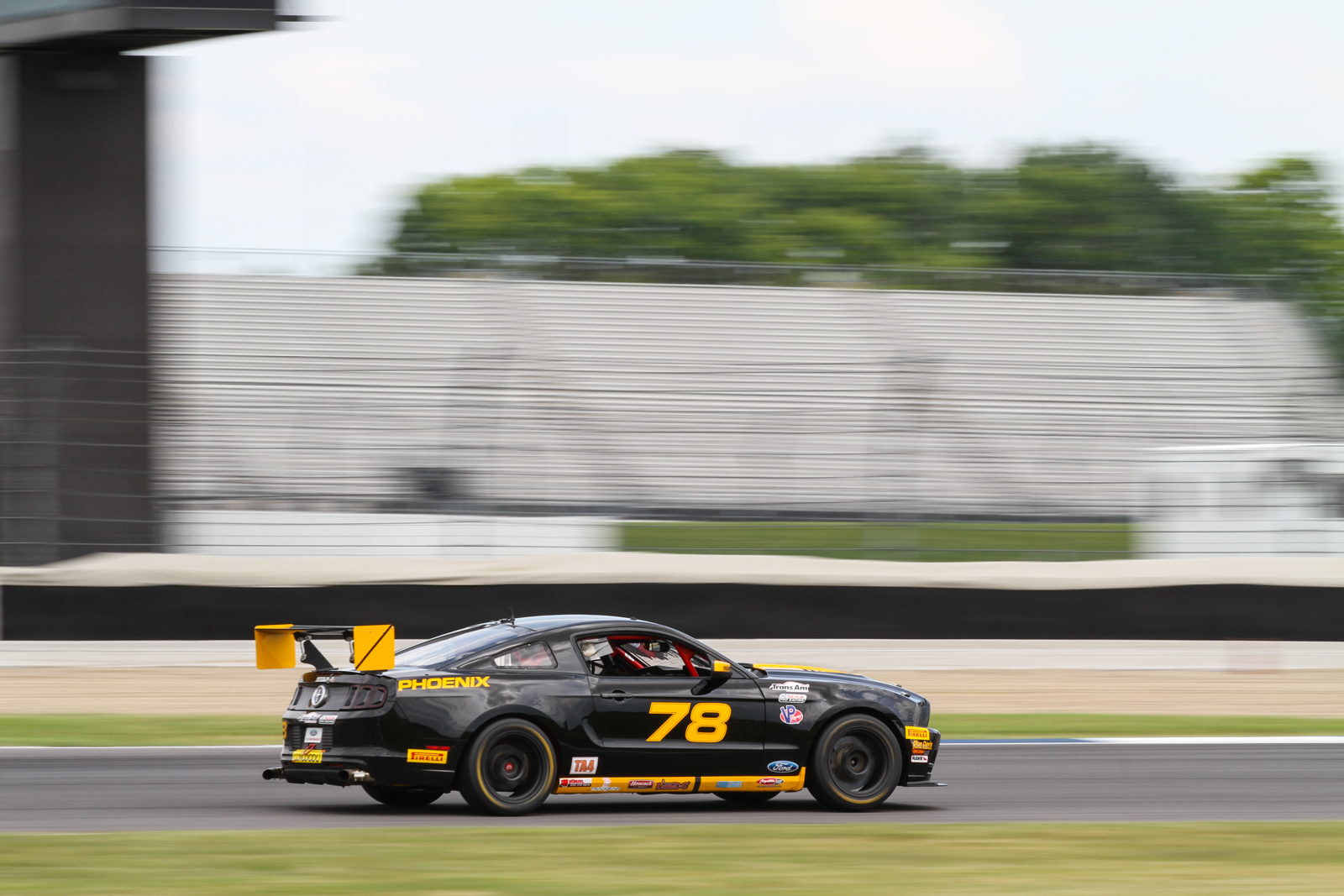 In TA4, Trans Am debutant Andrew Entwistle, in the No. 78 Phoenix Performance/ Hawk Ford Mustang, captured the class victory.  Entwistle started fifth and ran a patient race, dropping all the way back to 10th position on the fourth lap before starting his climb, eventually making a last lap pass on the No. 00 DWW Motorsports Ford Mustang of Chris Outzen for second position—a move that would prove pivotal.

Brian Kleeman, in the No. 07 DWW Motorsports Ford Mustang, would finish the race in first position, but was penalized following the race for avoidable contact and was moved to fourth position behind the No. 13 of Guy Dreier, who was contacted while holding the TA4 lead.  As a result, Entwistle would be declared the winner.

Chris Outzen, in the No. 00 DWW Motorsports Inc Ford Mustang, would finish second— a career best, while Guy Dreier, in the No. 13 Guy Dreier Designs/Maserati Gran Tourismo GT4, would be awarded third.  Kleeman and Todd Naiperalksi, in the No. 39 Chevrolet Performance/TREMEC Chevrolet Camaro would complete the top five.

Out of the 34 cars that officially participated in the competition, 22 were members of the production-based TA3 and TA4 classes, setting a record for the series.

The Trans Am Series presented by Pirelli will hold another 42-lap, 102.6 mile lap competition tomorrow, with the TA2 class holding the Indianapolis Muscle Car Challenge with 27 cars anticipated to take the green at 3:30 PM EDT.

“After today’s race, Tomy Drissi got into an altercation with another team which became physical,” stated Dallenbach.  “Tomy had been suspended from the series before I got here on some other issues.  He asked if he could come back to the series and did mend fences with a lot of people, but I was pretty clear with him at the first event that even though he was not under probation but he was under a high level of observation.  Basically, he was under probation with me and needed to keep his nose clean.  There was a situation at Road Atlanta with a corner worker that could have been a lot worse than it was, and today Tomy had a physical altercation.”

“You can talk trash and smack to each other as much as you want, but as soon as you lay a hand on somebody else, that becomes a completely different issue.  Due to Tomy’s actions he has been suspended for the event and suspended for the remainder of the 2017 series.”