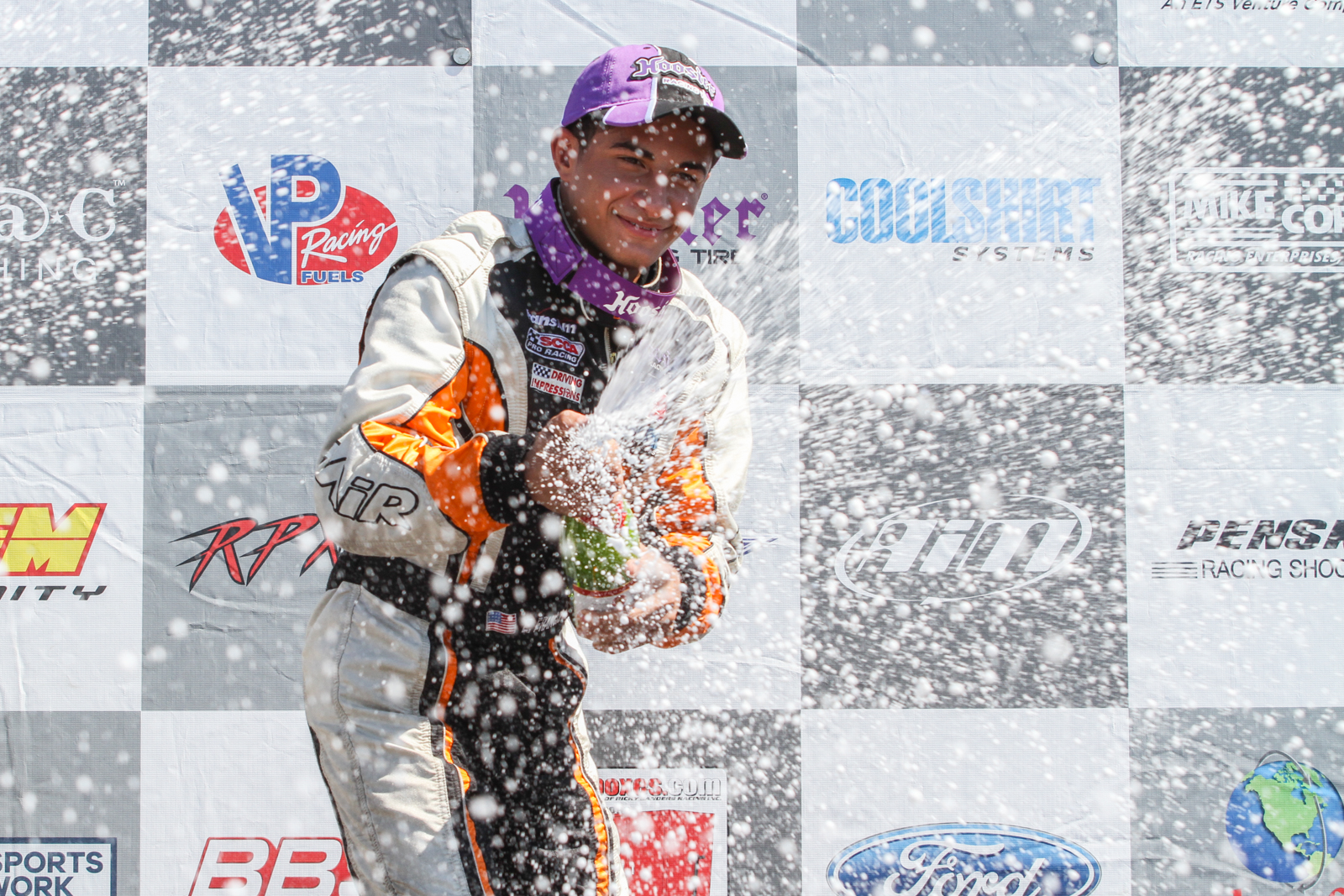 ALTON, Va.  [September 24, 2016] –  Paul Fix and Ernie Francis, Jr., each had special cause for celebration today as the Trans Am Series held the first of two races today at Virginia International Raceway, Round 8 of its 50th Anniversary Season.

Fix and Francis each had their own show of dominance in the TA, TA3 and TA4 multi-class race.   For Fix, his third consecutive Trans Am victory on the 3.27-mile track marked an imminent return to the thick of the TA class Championship battle.  For Francis, another flag-to-flag victory secured his third consecutive TA4 Championship in advance of the Series’ visit to his hometown of Miami.

Fix, in the No. 50 StopFlex.com/TheCarCoach.com/ Chevron Techron Chevrolet Corvette, began the race on pole in the TA class and was nearly untouchable throughout the vast majority of the 31-lap, 101.37-mile race, setting a new track record lap of 1:48.159 on his way to a resounding victory— his third in a row on a track on which he has seemed unbeatable.

“VIR reminds me a lot of Watkins Glen,” said Fix.  “It has a great rhythm, high-speed, it’s very technical; there’s a very fine line of adhesion here especially with the new pavement—and I just excel here. Even with the addition of the new pavement, the track really suits my driving style.  The guys at Ave Racing put together a great StopFlex Corvette, I couldn’t ask for a better car or better setup—we rolled off the trailer on fire.  It’s all about them and my engineer putting together a world-class car this weekend.”

The victory, Fix’s third of the year, goes a long way towards his bid for the 2016 TA Class Championship, with the five drivers ahead of him in the points coming into the VIR weekend all finishing sixth or below.

“It looks like the championship is finally within our grasp,” said Fix.  “This is what we were shooting for.  Up until this weekend, I was thinking ‘well, we’ll roll the dice and see where everyone ends up.’ I effectively took that drama out of my head and just drove, drove, drove like it was just another race.  The next four tracks are all ones I love and have done extremely well on, and we can only hope for great results there going into the end.”

The results puts Fix second in the Championship with 180 points to Ruman’s 190, while David Pintaric takes third with 179.  Cliff Ebben drops to fourth with 178, while Simon Gregg completes the top five with 164. 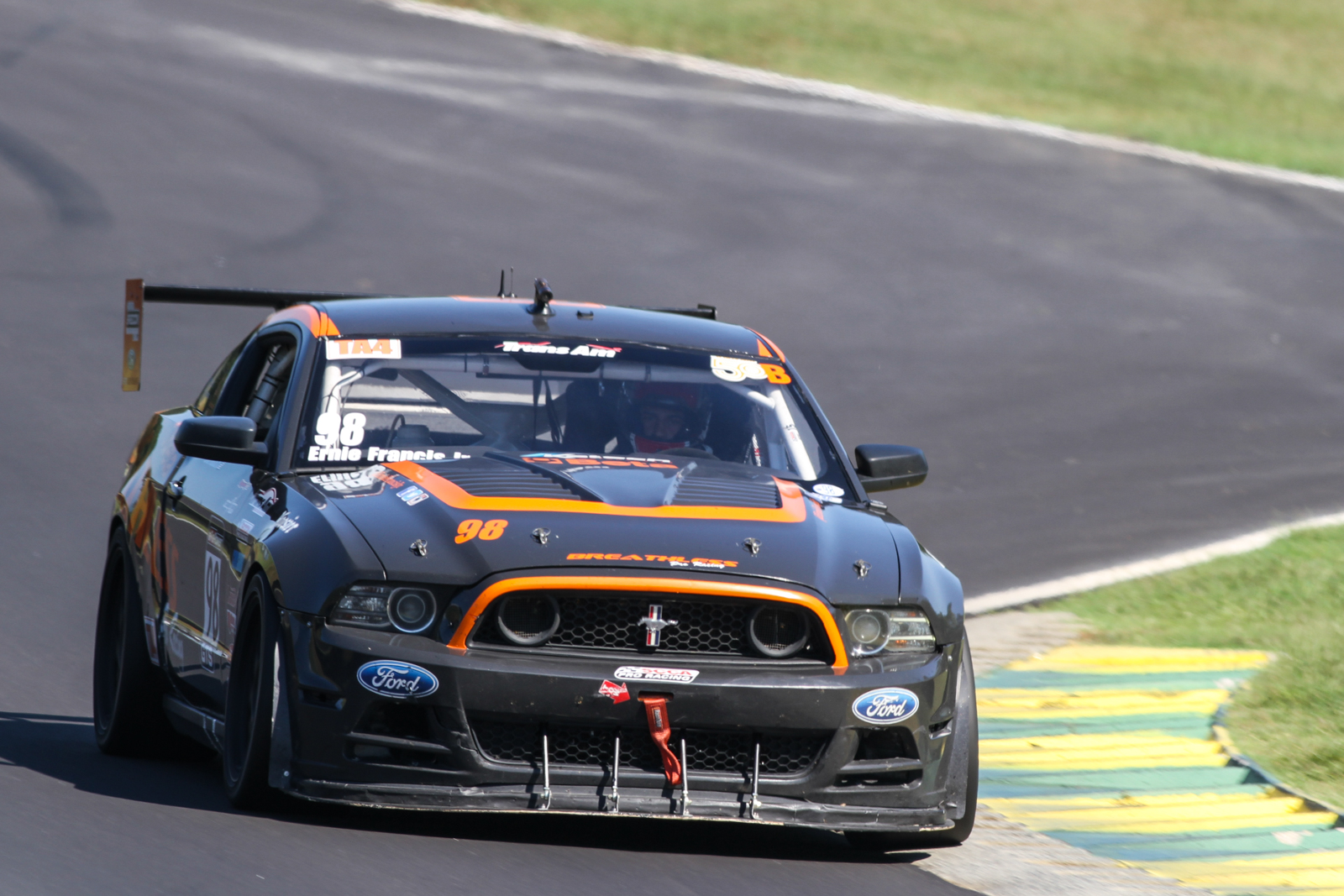 While the TA4 race offered little opposition for Ernie Francis, Jr., in the No. 98 Beta Tools/ Liquid Performance Ford Mustang, as he captured his eighth victory of the 2016 Trans Am Championship, there was still plenty of cause for celebration as he secured his third consecutive championship in the TA4 class, and its predecessor TA3: American Muscle.  With the championship finally once more under his belt, Francis can now look forward to next year and his efforts in the TA class.

“It’s really cool to sit back and think about what we’ve done,” said Francis.  “I love running out here in Trans Am, the history it has with it, you think about the names that have raced here, the greats, and to know you’re following in their footsteps.  It’s something special.  We’re really excited to join the TA class next year, and hopefully we can make it a fourth championship in 2017, in the top class here in Trans Am.”

Francis has been dominant throughout the course of the 2016 Trans Am Championship, with eight wins and six poles to his name—plus the added bonus of a victory in one of the Trans Am exhibition races in the Chevrolet Detroit Belle Isle Grand Prix.  With Trans Am’s next race in Francis’ home town of Homestead-Miami, he is ready for celebrations with friends, family and the Breathless Racing crew.

“First of all, I have to thank the crew,” said Francis.  “The whole team at Breathless Pro Racing—they gave me a perfect Ford Mustang Boss 302 week in and week out.  I have to thank the sponsors as well that let us come out and do this, Beta Tools, Liquid Performance, Driving Impressions—it’s been a crazy year and a great year and we’re looking forward to taking this momentum into 2017.  We’ll be unveiling a special wrap at Homestead-Miami next week and looking forward to some special celebrations on our home track.”

Francis was joined on the podium by Rich Jones, in the No. 37 JOMAC/ Sparta Steel Ford Mustang, who finished second and Mike Geldart, in the No. 43 Racer’s Edge/ Ford Performance Ford Mustang. 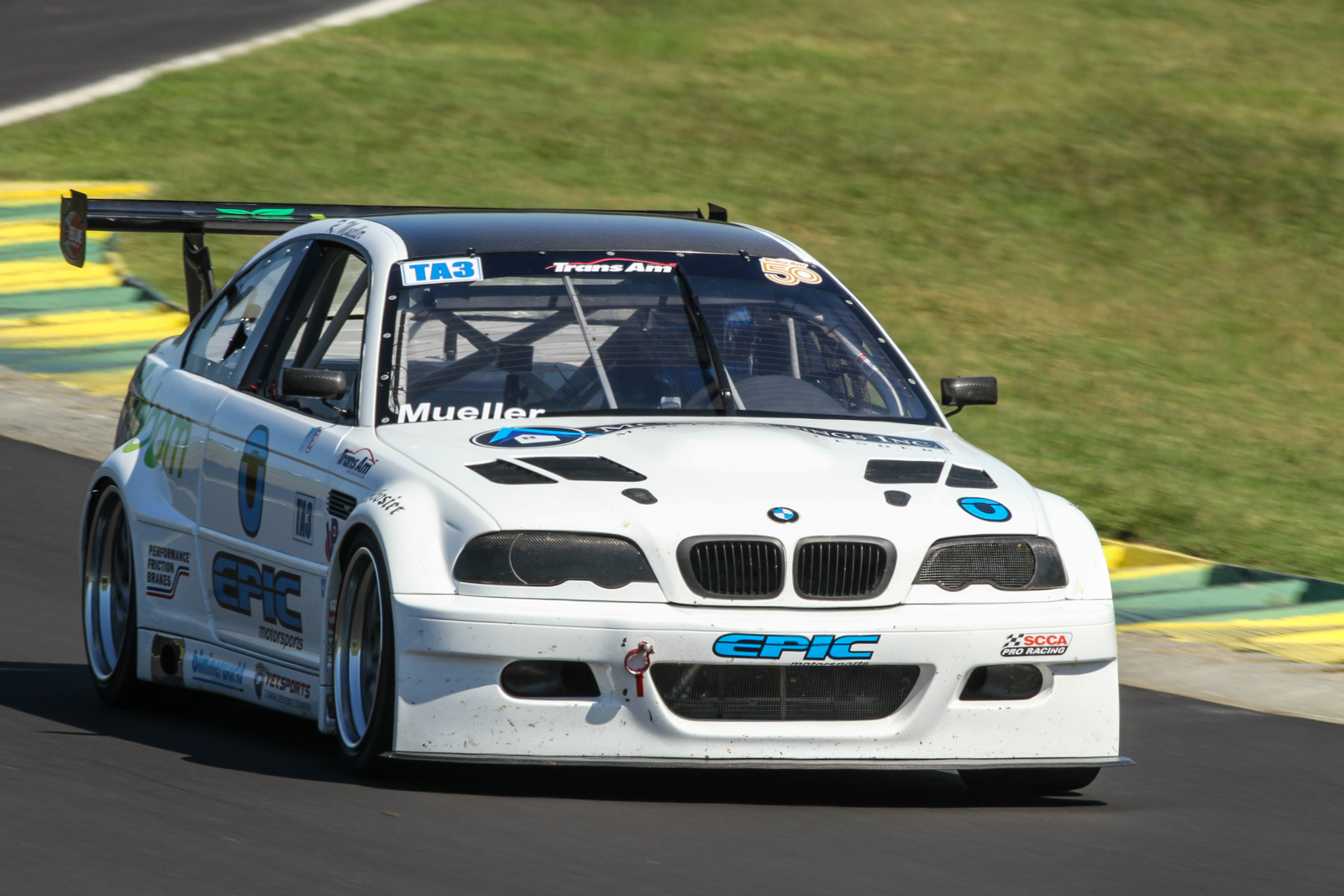 Randy Mueller, in the No. 0 EpicMotorsports/BizBloom BMW M3, extended his own lead atop the TA3 points with a victory of his own, overtaking Randy Kinsland, in the No. 11 Kinsland Racing Chevrolet Corvette, with just four laps remaining.

“I had a good lead early on and was able to distance myself from the pack,” said Mueller, “but then Randy (Kinsland) got around the Viper that was in P2 at the time and was coming like a freight train.  So I had to keep in mind to just be smooth and easy and take care of the tires since there was still so much of the race left—and I think that was the best thing, just to manage the tires.  I was watching him throughout the race and you could see his tires were fading; he was losing the car a lot more and that’s how I was able to catch back up to him.”
Over the final laps Mueller successfully completed the unenviable task of fending off Kinsland with a slight wobble in the No. 0.

“I don’t know if it was a set up issue or something on the track, but I kept losing the back end going through the NASCAR,” said Mueller.  “So what I ended up doing was not trail braking so much and just rolling through at speed into the turn.  Our cars work really well through turns. The Corvette that came in P2, it’s about the same weight so it should theoretically work as well through the turns, but on the straightaways we’re at a huge disadvantage, our aero isn’t nearly as good and we’re at a horsepower disadvantage but our balance in these BMWs is so good, it helps us keep the tires underneath us. It was just one of those things to have the patience to let the race come back to you.”

Mueller was joined on the TA3 podium by Kinsland and Steve Streimer, in the No. 42 Lux Performance Group Dodge Viper ACRX, who finished second and third, respectively.  The podium appearances were both Kinsland and Streimer’s third of the year.  For his final pass and efforts over the final laps, Mueller was also awarded the CoolShirt Systems “Cool Move of the Race.”

The crew of Russ Snow, driver of the No. 20 Guardian Services/ AIM Sports Chevrolet Corvette, were awarded the PitBoxes.com “Crew of the Race” for their efforts throughout the weekend in seeing the No. 20 take the green flag and finish a vast majority of the laps despite a multitude of mechanical hardships.

The TA, TA3 and TA4 classes will return to action October 9th, 2016 at Homestead-Miami Speedway for Round 9 of the 2016 Trans Am Championship.