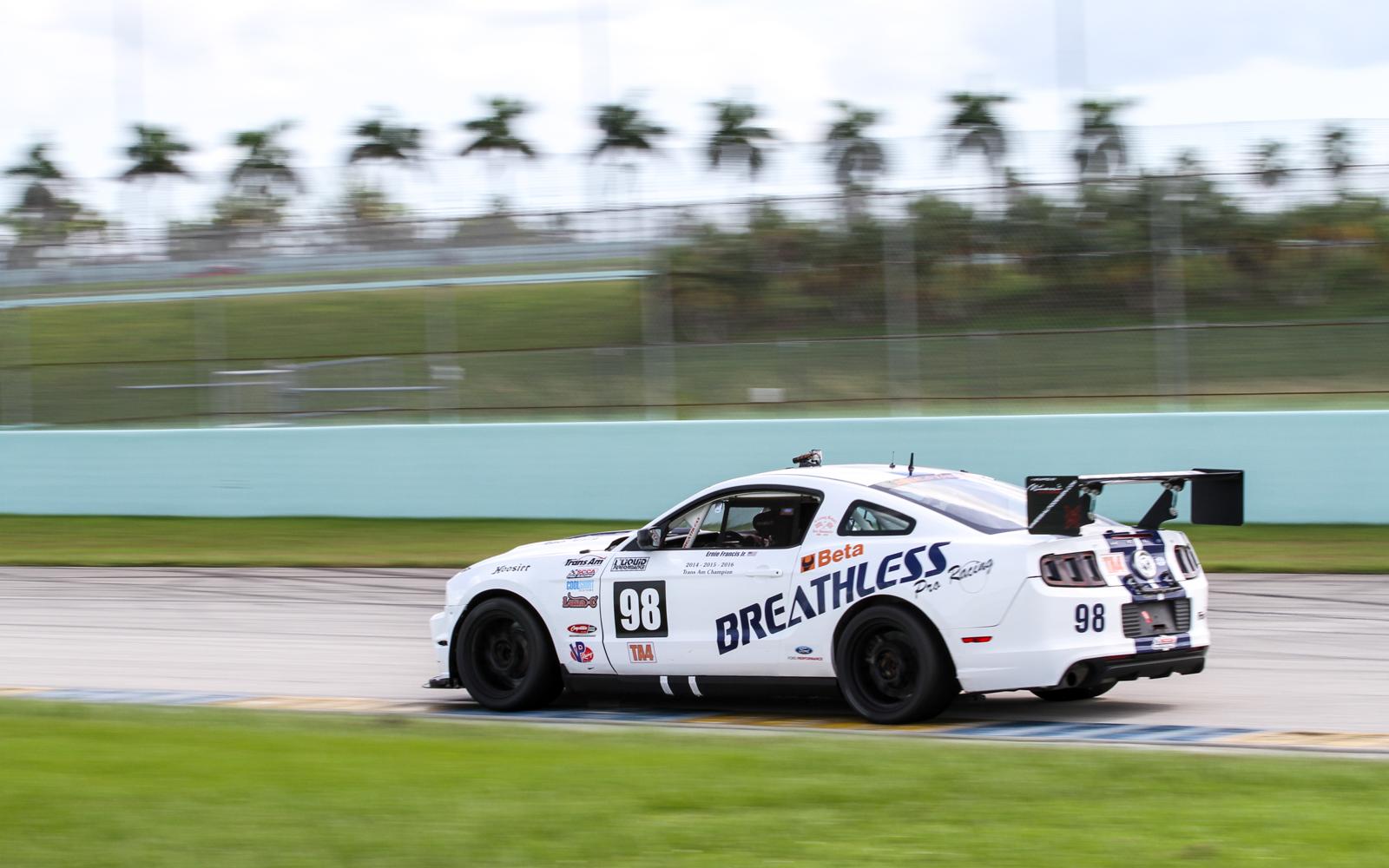 The official announcement was made Sunday, October 9th at 10:30am at Homestead Miami Speedway prior to the Trans Am Race in the Breathless Racing Hospitality Area, catered by Gus Machado Ford. Also announced Ernie Francis Jr. will be moving up to TA Class for 2017 and Breathless Racing along with Meissen Enterprises are building a brand new Trans Am Mustang TA Race Car for him.  Lastly we celebrated Ernie Francis Jr’s third Trans Am Championship.
Earlier this week we unveiled the Breathless Racing Team Trans Am Mustang wrapped in Team Shelby colors.  The special new look was debuted at the Trans Am Race at Homestead Miami Speedway for one race only this season.  The wrap was sponsored by Mimessi Auto Design based in Boca Raton to support Breathless Racing Team and Team Shelby South Atlantic Region.

In 2013, upon turning 15 years old, Ernie Francis Jr. became the youngest, licensed, professional driver competing in the Pirelli World Challenge Championships. Ernie captured top honors as “Rookie of The Year” with numerous podium appearances and winning a total of 7 races; more wins than any other driver in any class. Ernie Francis, Jr. finished the season in Third Place in the TCB class with the proud support of his partners – Festivals of Speed, Breathless Performance Products, Racequip, Bullseye Powder Coating and Florida Lithographix.

2014 saw Ernie Francis, Jr. racing in the Pirelli World Challenge in TCA with a Mazda MX-5 and the Trans Am Series in TA3-A driving a Camaro GTS. Again, Ernie dominated. He had 11 podiums out of 14 races in TCA and took home 3rd in the championship. In Trans Am, Ernie made it to the podium 9 times out of 11 races. He won on 6 of those occasions and became the youngest driver ever to claim the title of “Trans Am Champion”.
2015 had Ernie racing again in Trans Am and in World Challenge. He moved up to the competitive TC class in World Challenge. Ernie continued to show speed in both classes. Qualifying on pole for all 12 Trans Am races. Ernie Francis Jr ended the Trans Am season with 9 wins and a 2nd Championship. Ernie took on the World Challenge TC class as well. Winning 4 races and finishing 2nd in the championship by 6 points even while missing 4 races.
Ernie made the switch to a Ford Mustang Boss 302R for the 2016 Trans Am season and has now clinched his third straight Trans Am TA4 Championship winning all eight races so far this year with four more to go.  Ernie has the fourth most all time wins in 50 years of Trans Am Racing history. This season Ernie has also been running several races with ANSA Motorsports in their Audi R8 LMS in the FARA Series winning every race.
In 2017 Ernie Frances Jr. is making a bold move to the Trans Am TA Class and Breathless Racing is building a brand new Ford Mustang TA Race Car to compete in this very competitive top class.  Ernie will attempt to win as many races as possible striving for both his fourth consecutive Championship and to achieve the most wins in Trans Am Racing History.

ABOUT THE BUONICONTI GROUP

The Buoniconti Group will serve as exclusive worldwide manager and representative relating to Driver’s professional motorsports racing career. “We are extremely excited to be a part of the Ernie Francis, Jr. racing team.  Ernie has demonstrated tremendous skills and talent even at a young age to dominate every racing series that he has pursued”, says Marc A. Buoniconti.

The Buoniconti Group was founded by NFL Hall of Famer, Nick A. Buoniconti and his son, Marc A. Buoniconti, along with Mead McCabe, Jr.  For more information contact 305-243-7157 or via email at mbuoniconti@buonicontigroup.com