ELKHART LAKE, Wis. (4 July 2021) – Driving like a man on a mission, Chris Dyson motored to his third-consecutive Trans Am Series presented by Pirelli victory on Sunday in front of a sold-out Road America, taking a giant step forward in a bid for his elusive first Trans Am championship.

Driving the No. 20 ALTWELL CBD Ford Mustang, Dyson took the lead on a lap 11 restart and led the rest of the way, padding his points lead in the race for the TA title. Entering the race with a 12 point advantage, the four-time 2021 winner now provisionally leads Tomy Drissi by 23 points, 177-154. 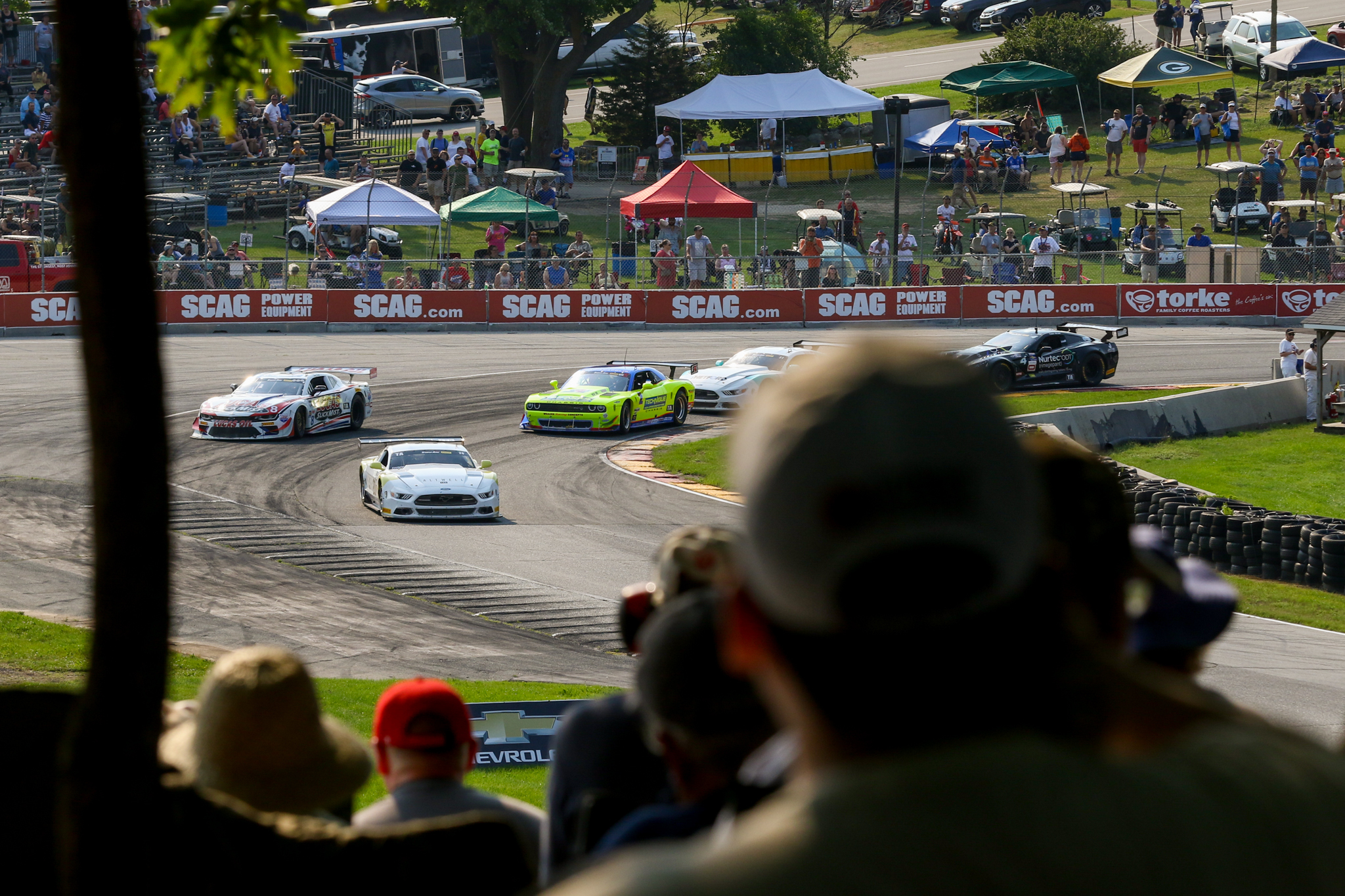 "What a day for us, putting the No. 20 ALTWELL CBD Ford Mustang on podium at Road America for the second year in a row, it's a dream come true," said Dyson, whose team won the Chill Out Award for a double-podium finish. "I am just so delighted to see all these fans out here this early today. This place is packed, a lot of enthusiasm, a lot of energy, and I was feeling every bit of it out on the track, I was feeding off it.

"It was a handful today" Dyson continued. "The conditions were pretty slick out there. I was playing with all the tools and experience I had to get us up front. When I have Tomy Drissi, Boris Said, Cody Ware, Ernie Francis Jr. and Guy Smith out there behind me, that's a tall order to stay ahead of those boys. The car was fantastic, I felt like I dug really deep and was rewarded with a victory."

"Pancho Weaver builds a great car," commented Said. "Unfortunately, the electrical box went. We were missing really bad and debated on pulling in and giving up. Then the issues went away, then it was intermittent for the rest of the race. I still drove the wheels off, it's still a great car. To have NASCAR here and all these fans, I've never seen a crowd like this here. This place is just awesome." 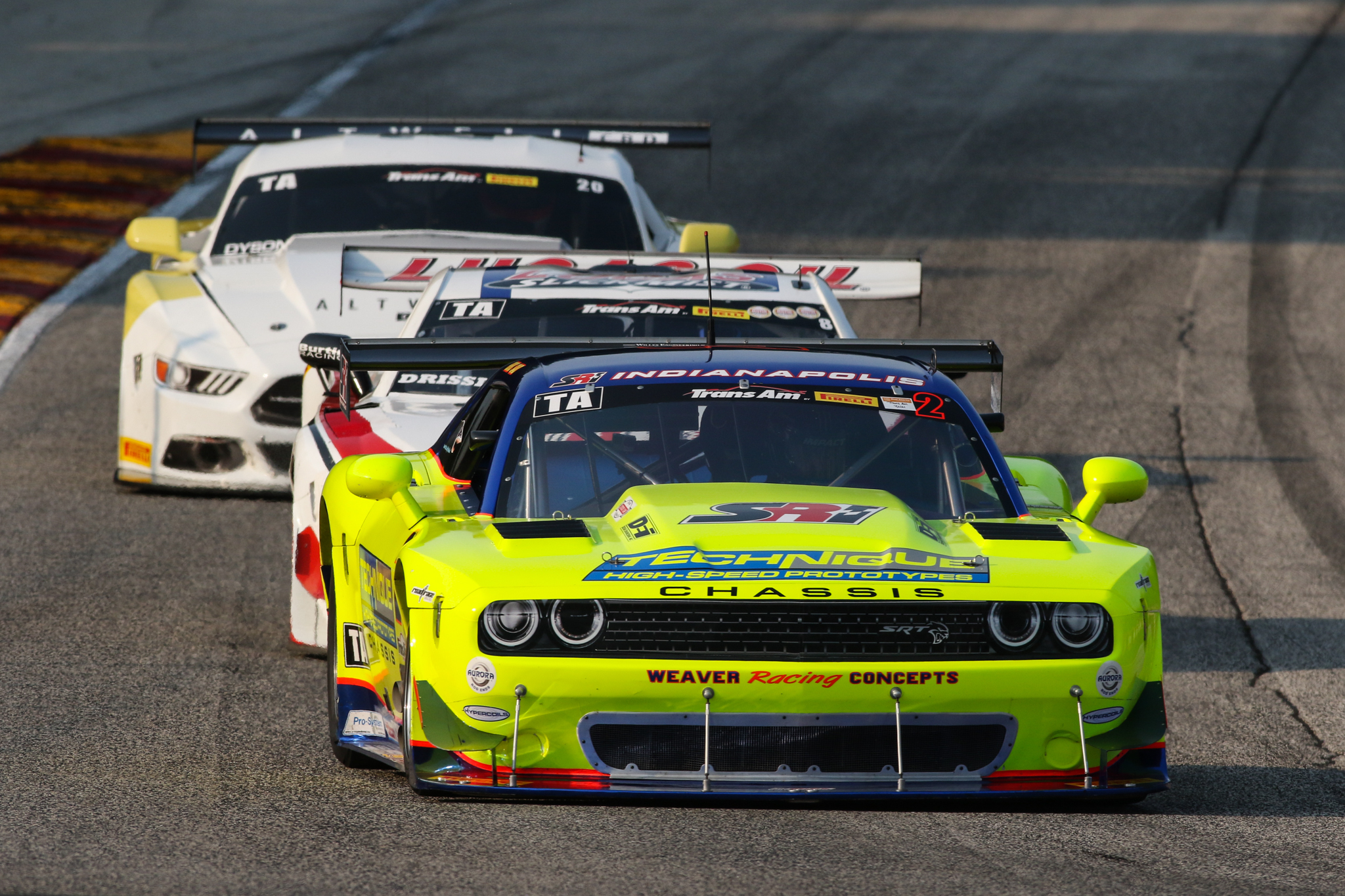 In position for a third-place finish, championship challenger Drissi went for broke in Turn 14 on the final lap in the No. 8 Lucas Oil Chevrolet Camaro. He led eight laps in the early going, but lost several positions on the first restart. Bidding to take second on the last lap, Drissi went spinning when Said slammed the door, falling to an eighth-place finish. Last year, Drissi also spun on the final lap challenging for the lead.

"It's been an amazing weekend," said Smith. "I got a last minute call from Chris (Dyson) to do this race. I've been following his season this year with Trans Am and what an awesome series you've got here with a great bunch of guys. The cars are just amazing to drive. I've driven some fast cars in my career but these things are a lot of fun. It was a great race and I was really pleased for CD Racing. Hopefully they invite me back to race with them again, I just loved it."

Only hours after scoring a major victory over a hall of fame lineup in the Camping World SRX series at Lucas Oil Raceway, Ernie Francis Jr. saw his hopes for an eighth-consecutive Trans Am title suffer a blow on Sunday.

Starting 24th in the 26-car field, Francis was 14th after one lap and was quickly up to eighth. However, he went to the pits on lap six with the No. 98 Future Star Racing Ford Mustang, losing four laps to repair a broken hime joint on the right-front control arm. Francis managed to come back out and set the fastest laps of the race but finished 13th in TA, four laps down. He remains third in the standings but is now 49 points in arrears.

Pro-Am Challenge driver Oscar Teran scored a career-best National Series finish of fourth in the No. 3 Ford Mustang, followed by Cody Ware in the No. 4 Ave Motorsports Nurtec ODT Corvette – becoming a third-generation driver in Trans Am competition. Simon Gregg was sixth in the No. 59 Peter Gregg Foundation Camaro. 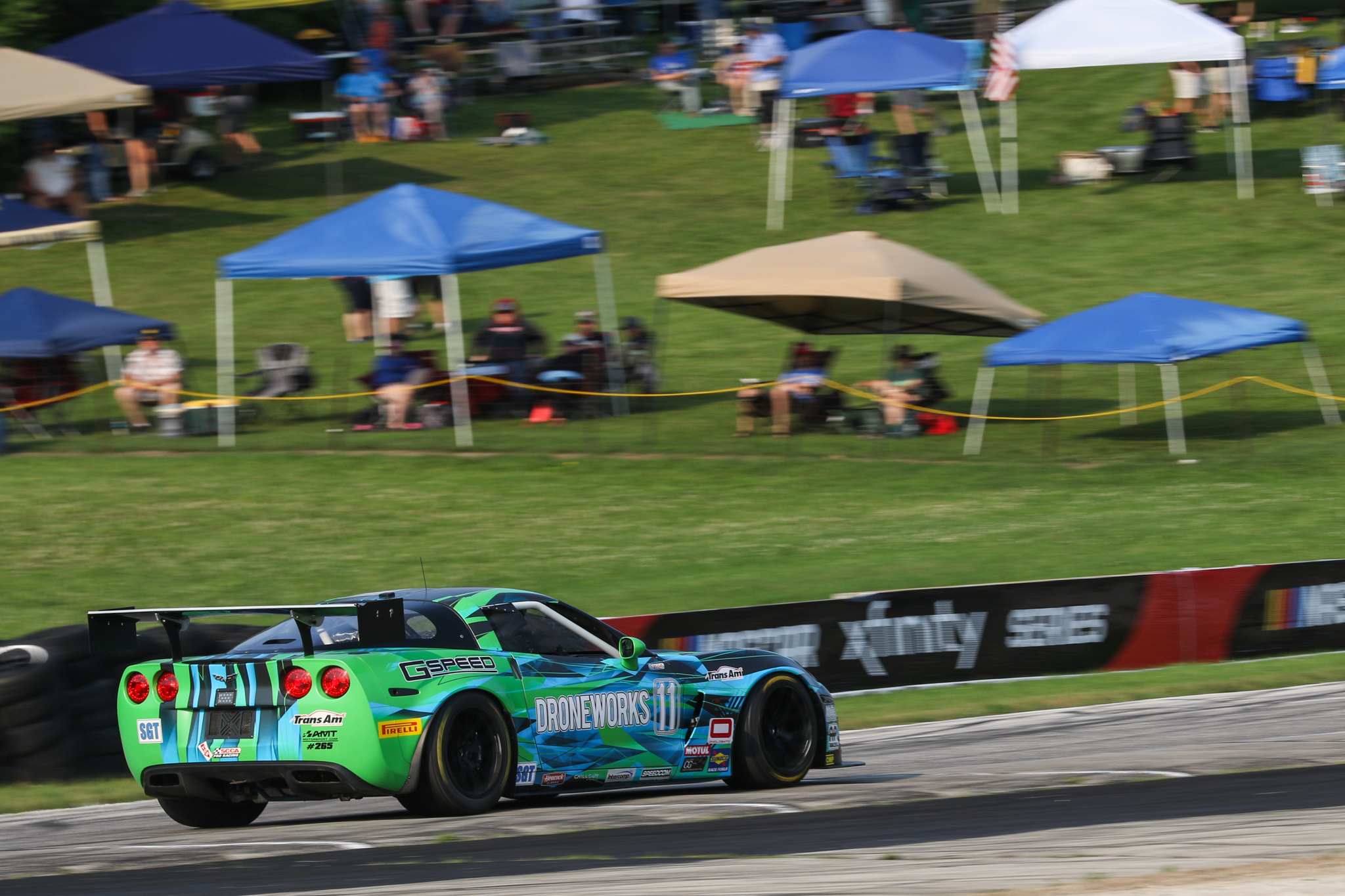 Denny Lamer finished ninth in the No. 66 Stumpf Ford/McMahon Group Mustang to earn TA Masters honors. The Wisconsin native designed all of the buildings at Road America.

"I am not the fastest driver out there, but I tried to outlast some of them, and we did that today," said Lamers. "I would like to thank Greg Bosch for giving me a car that could finish, and to finish in the top 10, against all these guys, that's pretty big for us. I got to say though that all the people here at Road America do a great job. I hope the fans love this track as much as I do. I hope we are with the Cup guys every year, it's the best track on the planet."

The race was slowed by a pair of caution periods. Aaron Pierce and Anthony Magagnoli got together in Turn 1 on lap five, bringing out the yellow for six laps. On lap 12, Larry Bailey went off in the kink, bringing the caution out for four laps.

"The Trans Am guys were hooked up today," Joiner said. "To see all the fans in Turn 5 and all the Porsche people who came by to say hello, it was just a fantastic weekend overall. It was a fun race and my guys do a fantastic job putting me in a safe car every week."

Justin Oakes took his fourth triumph in his campaign for the SGT championship. Oakes started second in class but took the lead on the first lap in the No. 11 Droneworks Corvette.

"What a wonderful experience, I feel so fortunate to be here," said Oakes. "It is beautiful weather with all the fans back, and the fact that we can be close together on the podium again for the first time is pretty spectacular. It just feels like we are coming back. Road America is amazing, and the fans here are even better. My team built me an incredible machine, this car is composed, balanced and it's reliable. Just everything about it is fun to drive." 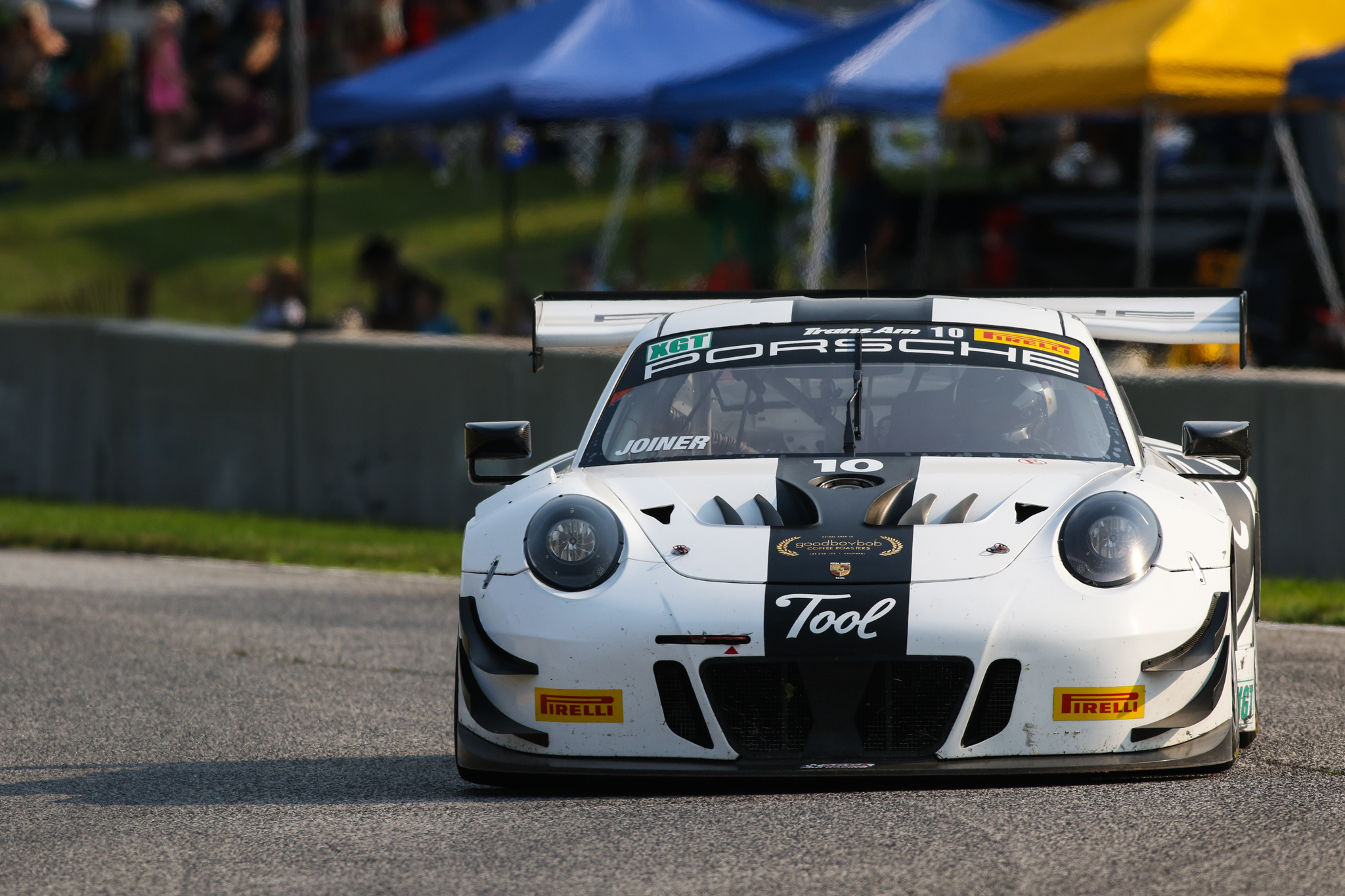 Lee Saunders, the 2020 SGT champion, made his return to competition with a second-place finish, 17.746-seconds back in the No. 84 Landsearch LLC Dodge Viper. He was followed by the No. 6 Porsche of Carey Grant, who beat out his father Milton for the final podium position. Milton Grant was the SGT Masters winner in the No. 55 Sentry Self Storage Porsche. Three different manufacturers – Chevrolet, Dodge and Porsche – made up the SGT podium.

After a week off, the Trans Am visits Brainerd International Raceway for Round 7 of the 2021 campaign on July 16-18, with a pair of Sunday races.