LEXINGTON, OHIO (24 June 2021)- Tying a five-year record-high number of event entries, the Trans Am Series presented by Pirelli returns to Mid-Ohio Sports Car Course for the Vintage Grand Prix June 25-27. More than 50 fire breathing Trans Am cars are expected for the event with 29 TA2® drivers set to take the green on Saturday, the most entries for the class at Mid-Ohio since 2016. 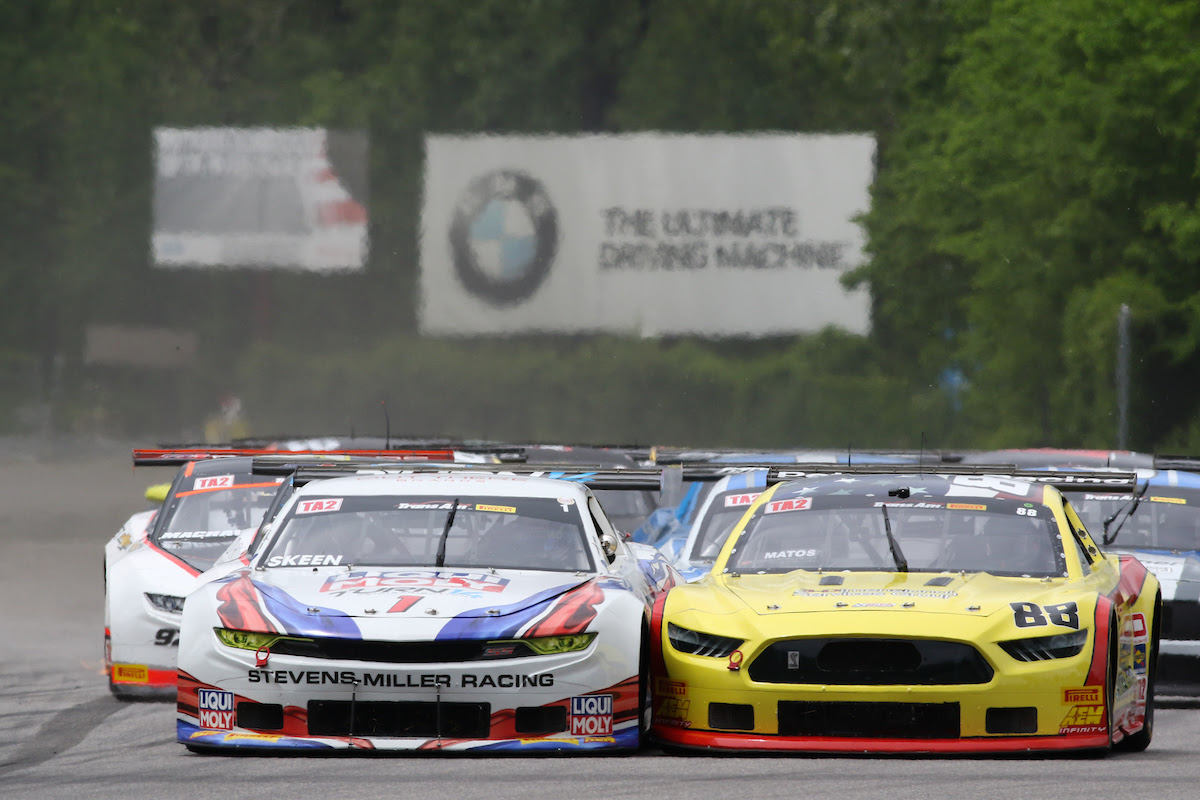 As the field gains competitors, the TA2® class competition gets tougher, making every round just as important as the last. The championship standings entering Mid-Ohio are even tighter with a mere one point separating first-place Rafa Matos (112) from defending class champion Mike Skeen (111), with third-place Thomas Merrill still within striking distance just five points behind Matos (107).

Mid-Ohio has always produced great results for Matos. Starting a tradition his rookie season by setting the track record (1:24.748-seconds), Matos has claimed pole position for the last three consecutive seasons. The championship leader went on to win one of the three races from pole in the No. 88 3 Dimensional Services Group Ford Mustang.

“We managed to finish on the podium every race but Road Atlanta, and that consistency is what is going to give us the title,” said Matos. “Mid-Ohio is one of my favorite race tracks in the United Sates, we have won there with the number 88 car in 2018, had the pole position also in 2019 with the Peterson 3 Dimensional car,” said Matos. “We’re coming off a win in Laguna and a near first-place finish in the last race at Lime Rock. The guys in the team are pushing hard on the car preparation so both me and Doug Peterson can have bullet proof cars.”

Driving from pole, Skeen bagged his first win of the season in the No. 1 Liqui-Moly/Turn14Distribution Chevrolet Camaro during the last round at Lime Rock Park. With back-to-back events (Trans Am will race over the July 4th weekend at Road America with NASCAR) Skeen needs a positive result at Mid-Ohio to edge himself past Matos.

“The win at Lime Rock Park was important to getting as some momentum in this championship,” said Skeen. “We have been getting the car stronger and stronger every time out, so I’m hoping we can continue to put it out front and take over the championship lead as we approach the busy mid-point of our year.”

Defending 2020 Mid-Ohio champion Merrill will miss this weekend due to a previous scheduled commitment, giving Skeen and Matos an advantage before Merrill returns to the lineup at Road America.

After finishing the inaugural Trans Am Esports Championship in second-place, Tyler Kicera moved back into real life Trans Am racing last season part time. Kicera proved that his talent behind the wheel was just as strong as his talents behind a screen as the Pennsylvania native secured his first Trans Am win in 2020 at Virginia International Raceway during his partial season run.

Committing to a full season this year with Silver Hare Racing driving the No. 5 Ford Mustang, Kicera is in the running to become the TA2® Wilwood Rookie of the Year. Road Atlanta winner Franklin Futrelle leads the rookie standings by five points headed into Mid-Ohio. Futrelle is not entered for the Vintage Grand Prix weekend, giving Kicera room to close the gap in the standings.

With his full season starting out rougher than he anticipated, Kicera has finished the last two rounds in the top 10 and is now eyeing a podium result at Mid-Ohio.

“We had a tough start to our season and just haven’t had the pace in our Ford to compete for a podium this year,” said Kicera. “Silver Hare Racing has been working hard all season and our best tracks are coming up, so I’m optimistic we can turn it around.  I’m looking forward to Mid-Ohio because it is a very technical track and one where I think a consistent, good handling car can really make the difference.”

Three drivers, Alex Wright, Bruce Raymond and Evan Pecore, are entered in the new Trans Am ProAm Challenge for Mid-Ohio. Raymond is second in the class standings (Sam Mayer is first) while Wright holds third. Though, Wright has a leg up on Raymond this weekend as the Mt. Vernon, Ohio, resident will have home track advantage driving the No. 12 Berryman Products Ford Mustang.

“I always look forward to racing at Mid-Ohio,” said Wright. “It's such a special, classic track, and it's right in my backyard. I grew up going to watch races there, and it was the first place I ever drove myself around a race track. I've got more laps there than I have anywhere else.  With the ProAm Series as competitive as it's shaping up to be, we need every point we can get. I want to make sure I maximize the opportunity while I'm at my home track.  I'm also hopeful that the Ohio summer weather cooperates, because Mid-Ohio is famously difficult in the wet!”

Ken Thwaits will pull double duty this weekend, racing in both the TA and TA2® features. Thwaits has entered select TA2® races as the reigning XGT champion prepares for his first street course race with TA2® in his hometown of Nashville.

“I ran both classes at Laguna Seca and stamina was not a problem,” explained Thwaits. “So since the weekend format is similar to Laguna, I can race the TA2® car on Saturday then hydrate all evening and be ready to go for the TA race on Sunday. My goal is to get more seat time in the TA2® car in preparation for the Nashville GP race weekend.”

One of the several drivers making their TA2® debut this weekend at Mid-Ohio is Darin Mock. Mock is the son of former NASCAR driver and NASCAR Cup team owner Butch Mock, having many notable drivers such as Neil Bonnett, Todd Bodine, Dick Trickle and Lake Speed. Mock has the same passion for racing as his father,but is pursuing his own ambitions in motorsport as a road racer. Mock will filed the No. 51 AAN Adjusters/MCR Ford Mustang under the Mike Cope Racing tent.

The weekend kicks off for Trans Am drivers with optional testing on Thursday for TA2®. The official weekend for TA2® starts on Friday morning with practice followed by qualifying at 5:40 p.m. Eastern. The TA/XGT/SGT/GT classes will also hold an unofficial test on Friday.

Saturday the TA/XGT/SGT/GT drivers will host an optional test session before the 45 laps (or 65 minutes) TA2® Feature Race (1:05 p.m. Eastern). The day will conclude with a split TA/XGT/SGT/GT qualifying at 5:15 p.m. Eastern.  The weekend wraps up on Sunday with TA2® taking the green at 1:10 p.m. Eastern.

The full weekend will be live streamed for subscribers on the Trans Am by Pirelli Racing App: https://bit.ly/35EAnND