A Word with the Young Guns 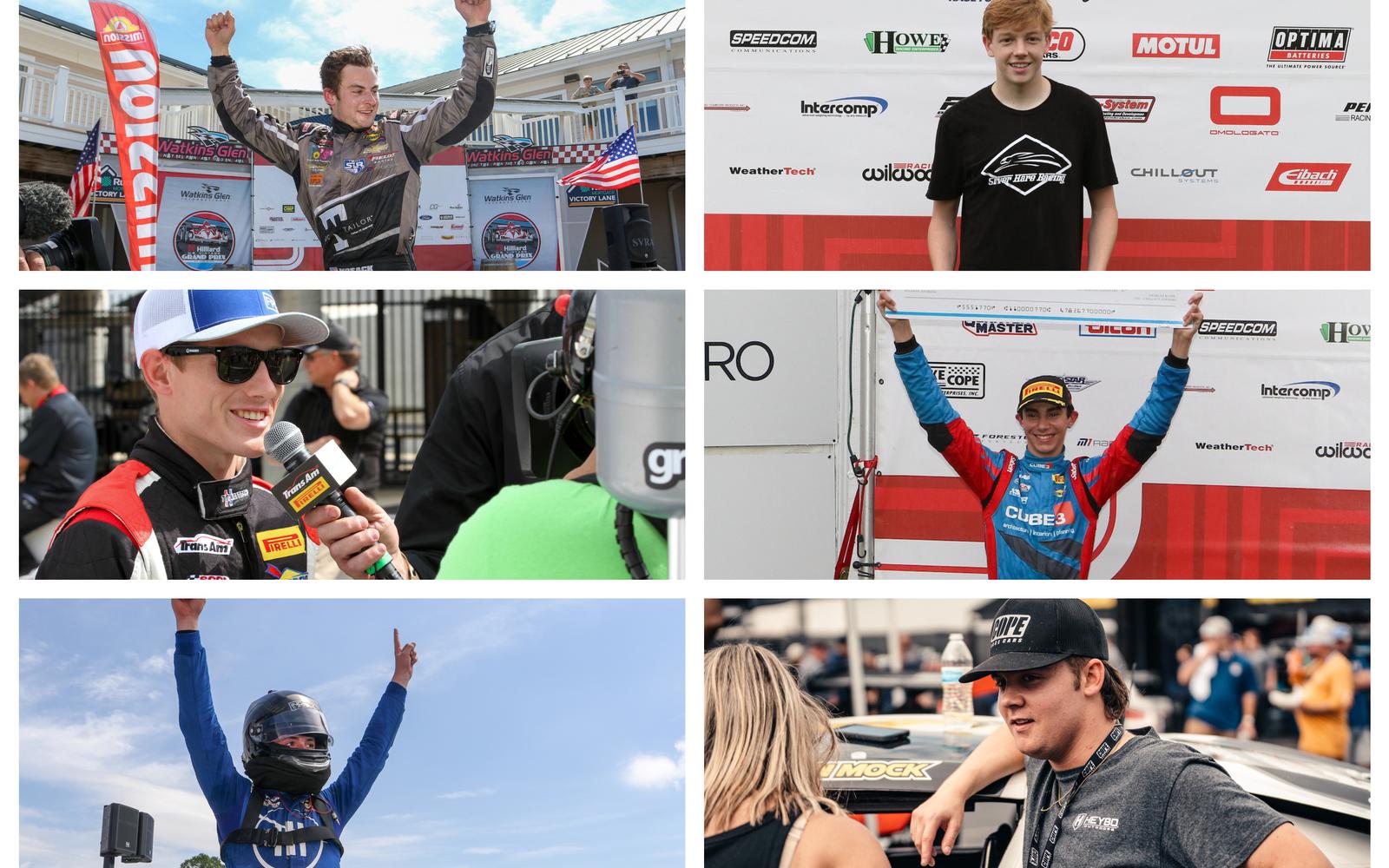 The 2022 class of Peter Gregg Foundation Young Guns is proving to be the future of motorsports, both in the Trans Am Series presented by Pirelli, as well as in other racing disciplines. The depth of talent of those competing for the year-end $20,000 prize has exceeded expectations, with drivers under 25 years old earning three wins and five poles in the first 10 TA2 races this year. Two Young Guns, Connor Mosack and Brent Crews, are very much in the hunt for the TA2 class championship.

With the 2022 season entering its final stretch, we took a moment to speak with some of the top Young Guns about their season so far, their role models and more.

Trans Am: How would you describe your season so far this year?

Brent Crews, driver of the No. 70 Nitro Motorsports Ford Mustang: “My season has gone pretty good so far. We struggled a little bit at the beginning of the year; we had some penalties that set us back and some mechanical errors that weren’t the fault of the team. We’re rebounding from that and hopefully have some great races and some more wins to come.”

Connor Zilisch, driver of the No. 5 Silver Hare Racing Camaro: “It’s been rocky, for sure. Some tracks we’ve showed up with really good cars, some tracks we’ve showed up with some not-so-great cars and we’ve had to work on them. It’s been a little up-and-down for us. That’s racing for you; you can never be perfect at every race you show up to. We’ve been working really hard back at the shop to try to get our cars better so we can show up and not have to work so hard on them. I’m just thankful for this team that is behind me and everyone who gives me this opportunity.”

Dylan Archer, driver of the No. 4 FPEC Chevrolet Camaro: “I think our season has been all right. I think our luck could have been better in a few different circumstances, but considering it’s our first season and it’s our first race at all these tracks, I think where we are isn’t too horrible. Obviously, we’d like to be up front a little bit more. But to have a contract signed for next year while we’re in September is a huge deal, and that will allow me to focus more on the task at hand on a race weekend.”

Evan Slater, driver of the No. 35 Cube 3 Architecture Ford Mustang: “Our season has been really good. It has been a ton of fun so far; I’m really enjoying it. We’ve had a couple of difficult races, but I’m learning at every race and really enjoying it.”

Darin Mock, driver of the No. 51 AAN Adjusters Ford Mustang: “We’ve had some bad luck for sure. It’s been a learning experience, but the competition in this field is just really tough right now. We’ve shown signs of speed, we just haven’t put a race together yet.”

Connor Mosack, driver of the No. 28 Nic Tailor/IFS-SLR/M1 Racecars Ford Mustang: “I feel like we’ve had really good speed all year, so overall it’s been a good season. We really needed that win. We’d been close a couple times. I feel like we had a couple taken away from us. Hopefully we continue to have the speed to stay up front and [our win at Watkins Glen] is the momentum we needed to finish the season off with two good finishes at VIR and COTA.”

TA: With longer breaks between events as we get toward the end of the season, how do you stay sharp between races?

Crews: “I do a lot of other races and I train five days a week for about an hour and a half with my Toyota crew. They do a great job of helping me prepare for the 70 minutes. We’re just going to keep doing our best.”

Zilisch: “I’ve been racing every weekend, really, whether it’s a late model or MX5 Cup or even Legend cars or some dirt racing. Anything that can keep me in a seat, I’m going to do it, because the more you can drive, the better driver you’re going to be. I’ve been staying really busy away from Trans Am, but it’s all beneficial when I come back here.”

Slater: “I drive as much as I can, trying to get as much seat time as possible. I also have a simulator that I spend lots of hours on every day, just to further hone my skills. I also work out with my trainer every other day.”

Mock: “Living in Charlotte I’ve got access to a lot of things, so I’ll get on the simulator if I can. There’s a go-kart track up in Mooresville, N.C. where I live, so I go and make laps. There’s not a ton you can do outside of the racecar but I do the best with what I’ve got.”

Mosack: “I’m racing almost every weekend in something else; I’m always staying in the seat, whether it’s ARCA, late models or NASCAR, I’m trying to keep myself busy and stay fresh.”

TA: Is there anyone in the garage who has been particularly helpful to you this season, or is there anyone that you consider a role model?

Crews: “I try not to have role models, because I believe that if I have a role model, I can’t be better than them. The one to help me the most would probably be Thomas Merrill. We get along well. He helps me with data sometimes and we just chitchat back and forth, helping out.”

Zilisch: “I think there’s a lot of guys out there, they all want to help. Mike Skeen is always willing to help, Thomas Merrill always give you advice. A bunch of those veteran guys in the series are all super helpful and aren’t really keeping their secrets to themselves. They want the younger generation to shine. They’re really welcoming and it’s been a really good experience racing against all of them so far this year.”

Archer: “The crew guys on my team have my back and I’m over-the-top-thankful for them. There are guys like Rafa Matos, Adam Andretti, Thomas Merrill and Mike Skeen. If I send them a text, they’ll give me the time of day and help me with it. I’m really appreciative to have help from those type of guys.”

Slater: “The whole Stevens-Miller Racing team has been really helping me out all season. I’m really enjoying their support.”

Mock: “I would say my teammate, Thomas Merrill, for sure. He’s been a big help. Brent Crews, too. The guys in the Cope cars have helped me a lot, going over video, going over data and stuff.”

Mosack: “For me, it’s both Scott Lagasse Sr. and Scott Lagasse Jr. They’ve helped me become a much better driver over the last year, whether off track or on track. Having that relationship has been the biggest for me.”

TA: If you could add one track to the Trans Am schedule, what would it be?

Zilisch: “You know, I think Daytona would be really cool in these cars.”

Archer: “This track just got taken away with the switch to downtown Detroit, but I would say Belle Isle. My family has a lot of history there. I like that track on the simulator, and it seems to flow pretty well, so I’d probably have to say Belle Isle.”

Slater: “I don’t know. Homestead is pretty cool. It’s got a fast straight.”

Finally, after so many Young Guns mentioned Thomas Merrill as someone who has helped them throughout the year, we spoke to him.

Thomas Merrill, driver of the No. 26 BridgeHaul/HP Tuners/Cope Race Cars Ford Mustang: “Oh wow, that’s great to hear. It’s partially a selfish effort on my part, because I just enjoy it. I enjoy working with these young talents and helping shape their careers. They’ve got a bright future, so if I can be a part of that, that makes me smile. It’s all good, especially if they’re in a Mike Cope car, I really like helping them out.”