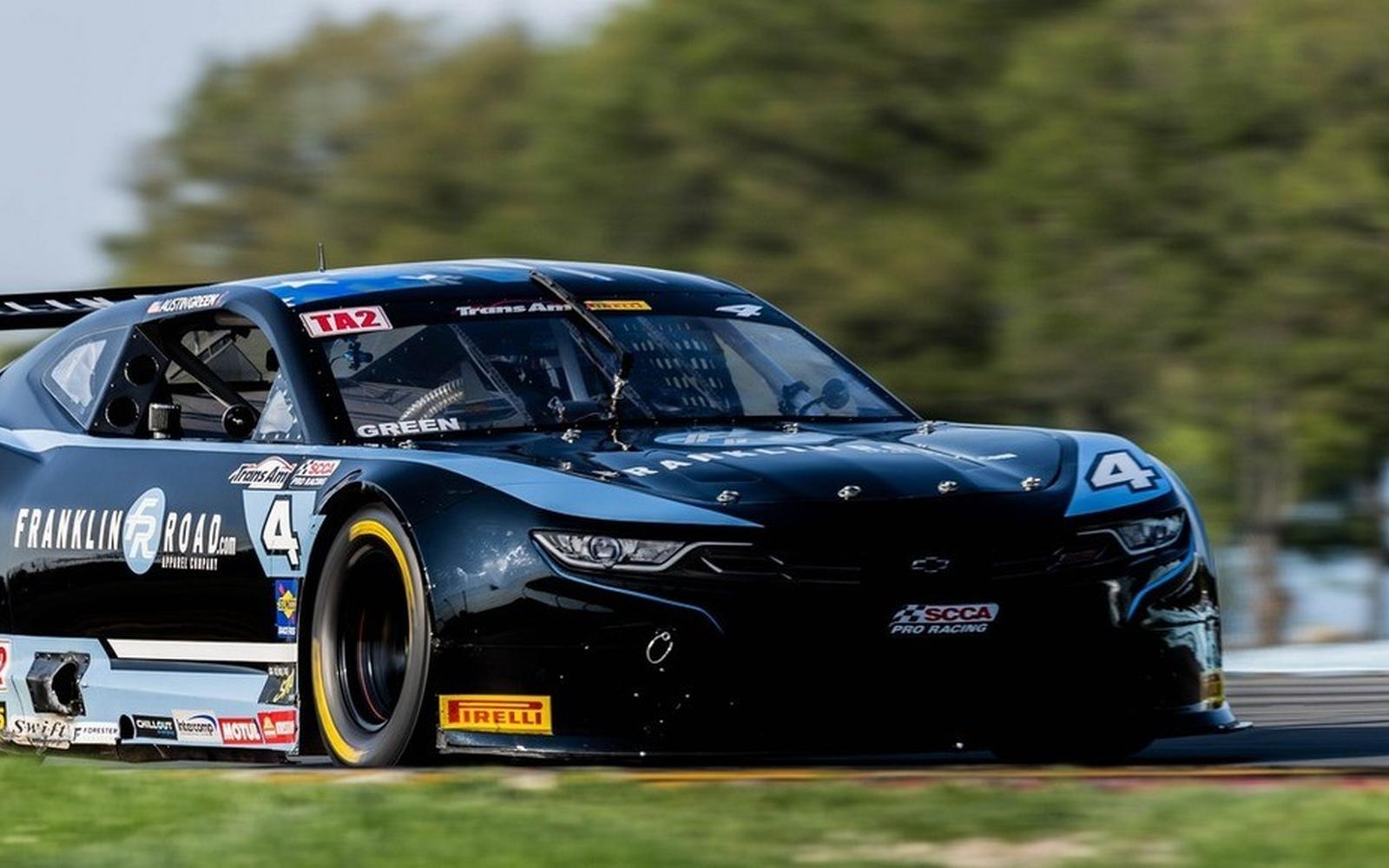 The sun was out Saturday morning at the legendary former home of the Formula One United States Grand Prix which made for very warm cabins for the drivers. Austin's problems were further compounded by the loss of his power steering and the Concord, North Carolina youngster did exceptionally well in the circumstances to guide the muscle car home into P8 having begun the race in P13.

As title partner for Round 10 of the 2022 Trans Am presented by Pirelli TA2  Championship season, Franklin Road Apparel supremo Ken Thwaits had plenty invested in the weekend's events so it was great to see the popular Tennessee stalwart satisfied with how the race unfolded.

"Overall the race weekend went fantastic for us in TA2," he said in the paddock post race. "Derek Jennings has turned a corner for our team and these cars are fast! We had a part failure on Cameron's car which unfortunately ended his race early. Austin Green qualified 13th and lost his power steering early in the race and we were wondering if we should bring him in or not but decided not to give up track position. We made him drive that thing without power steering the whole distance and he delivered!"

Green proved himself up to the physical challenge as Ken confirmed, "I told him that's why we lift those weights. On top of that he had contact with another car and that messed things up a bit but we finished P8 and we'll take it. Great job!"

Austin himself clearly enjoyed the experience as he confirmed to our reporter on climbing out of the hot seat, "It was an interesting race. I qualified 13th which was a little further back than we wanted. It's a long race so there are going to be lots of cautions and a lot of wrecks. We were running pretty good and then on Lap 10 the power steering went out. That was a first for me!"

Austin carried on battling and fortunately contact later in the race didn't spoil his day though he needed all his strength after the power steering went, "We had a little contact later on. I need to start working out. This is my first time racing with Franklin Road. They work day and night, so huge thanks to Ken, Franklin Road Apparel and everybody on the team."

Former Champion Cameron Lawrence had started on the grid in P4 after an impressive qualifying session saw him post a time of 1:50:580 in the No. 6 Franklin Road Apparel Showtime Motorsports Chevrolet Camaro while Austin's time in the No. 4 car was 1:51:695.

Next up for the Showtime Motorsports team is a trip to Virginia International Raceway for the Mission Foods VIR Speed Tour October 6 to 9.

About Showtime Motorsports:
The Showtime Motorsports team is based in Franklin, Tennessee and is the power behind the Franklin Road Apparel brand. Showtime is responsible for preparing the cars for the track and keeping Ken Thwaits' outstanding classic Camaro collection in prime condition. Showtime Motorsports competes in both the TA and TA2 classes in the legendary Trans Am muscle car series with growing success. The race team consists of a dynamic, passionate and talented staff of professionals dedicated to excellence both on and off the track.