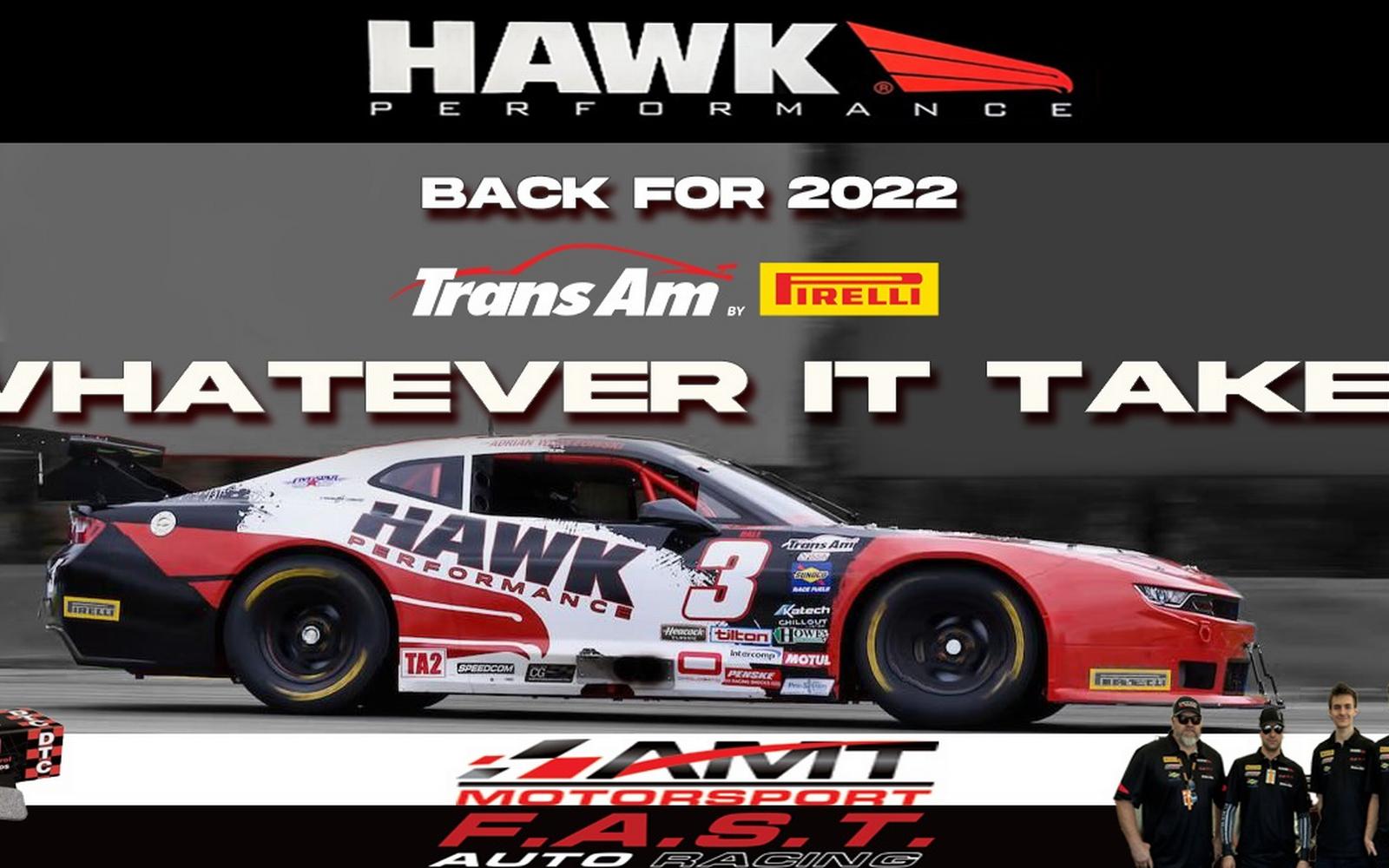 “We could not have been more excited to announce our return to The Trans Am presented by Pirelli’s TA2 category for 2022,” Wlostowski said. “We were in the Hawk Performance booth the entire show and we were thrilled to be a part of PRI and the Hawk Performance display.”

Hawk Performance Program & Marketing Manager John Butler said, “We’re thrilled to continue our partnership with Adrian Wlostowski and F.A.S.T. Auto in 2022. There’s a lot of engineering that goes into car set up in the pursuit of tenths. Hawk Performance and F.A.S.T. have been working together to fine tune the stopping power of Adrian’s Hawk Performance No. 3, TA2 car. Utilizing different brake pad compounds for different environments, ranging from our DTC-80 material to our all-new ER-1 motorsport compound, we’ve developed what we are confident is a field-leading package.”

Butler continued, “In his debut year, Adrian and his team finished fifth in points. TA2 is one of, if not the most, competitive series in the country, and that says a lot about Adrian and his team. We couldn’t be prouder of his accomplishments and how our product performed.”

New for 2022 will be the support of AMT Motorsport.

AMT President Mark Petronis said, “AMT Motorsport was born out of necessity in 2016 while building our C5 Corvette for NASA’s Super Touring category. During our build we found the parts we were buying were not engineered and built to the standards of our own company, Advanced Manufacturing Techniques. We were constantly faced with poor design, fitment, finish quality and instructions. We saw an opportunity to build parts for ourselves and other racers that met the standards required by the aerospace and medical industries we have served for more than 30 years.

"We are extremely excited to be partnering with Adrian for the 2022 Trans Am season," Petronis continued. "We became close friends while competing against each other in 2016, and I've had the pleasure of working with F.A.S.T. Auto on a professional basis since 2019. They utilize our parts on the cars built in their shop and I've always admired Adrian's attention to detail and work ethic. These qualities have already translated to a very successful first season in TA2."

In their announcement, F.A.S.T Racing Team also stated they will have two new Howe Racing Enterprises cars under their awning to begin 2022.

“We learned a lot in our first season,” Wlostowski said. “It took three races just for us to see our first checkered flag. Over the year, we put a great crew together and to finish fifth is just fantastic for everyone on the team. We’re putting what we learned into the new Hawk Performance car and the No. 98 after it burned to the ground at COTA. We have a lot of confidence the new cars, and that will be an advantage, especially with the knowledge we gained over this last season.

“I will be on board at every event challenging for the title. Like last season, Doug will be racing at selected events but, new for 2022, the No. 98 will be available for arrive and drive when Doug is not in the car.

“Power-wise, we’re going with the Katech ‘Choice’ engine. It just makes sense in the long run. We need a good consistent car that will go the distance race in and race out and I really think the ‘Choice’ package is the way to go.

“My team and I are ready – and we’re looking forward to making the new season a F.A.S.T. one!”

AMT Motorsport:
Born out of necessity in 2016, AMT Motorsport was created to fill a void in the marketplace for serious track-focused Corvette customers. AMT prides itself in engineering creative and new solutions to increase the performance of C5-C8 Corvettes, and they do so by handling all aspects of design, testing, and manufacturing completely in-house at their facility in New York.
www.amtmotorsport.com