A perfect season carried Erich Joiner to a pair of Trans Am Series presented by Pirelli championships in 2021.

Joiner won all nine of his races to capture both the Trans Am National and Western championships, driving the No. 10 Good Boy Bob Coffee Porsche 991 GT3R that served as a tribute both to one of Trans Am’s first Porsche champions and a beloved family pet.

Joiner won all seven starts to capture the National XGT title, winning at Laguna Seca, Lime Rock, Mid-Ohio, Road America, both ends of the Watkins Glen International doubleheader and Circuit of The Americas.

He also won four of the seven events on the Trans Am Western Championship schedule, at Sonoma, Laguna Seca, Utah Campus and CoTA. With the Laguna and COTA races combined, he was perfect in nine 2021 events.

“It was nice – it was good,” Joiner said when asked about his perfect season. “There was the reliability of the car. In a few of the races – especially when they mix up all the classes – there was a lot going on in those races.”

A year ago, Joiner finished second in the XGT points, winning three of five races – including his first Trans Am start at Sebring from the pole.

“It turned out to be a nice season,” he said of 2020. “We ended up going to only four events – one of them being the doubleheader at VIR. I think we always managed to have the fastest race laps and sat on pole three times.
add."

Two very different reasons attracted him to Trans Am.

“One was the history and heritage of Trans Am, and growing up as the son of someone who loved auto racing. We were family friends of Parnelli Jones. The history and lure of Trans Am was one thing, and the second was that in 2020 they added the GT class with the GT3 cars. I think the combination of those two things brought me in and I ended up enjoying it.”

With so many big moments to pick from, Joiner found it hard to name a single personal highlight for the past season. 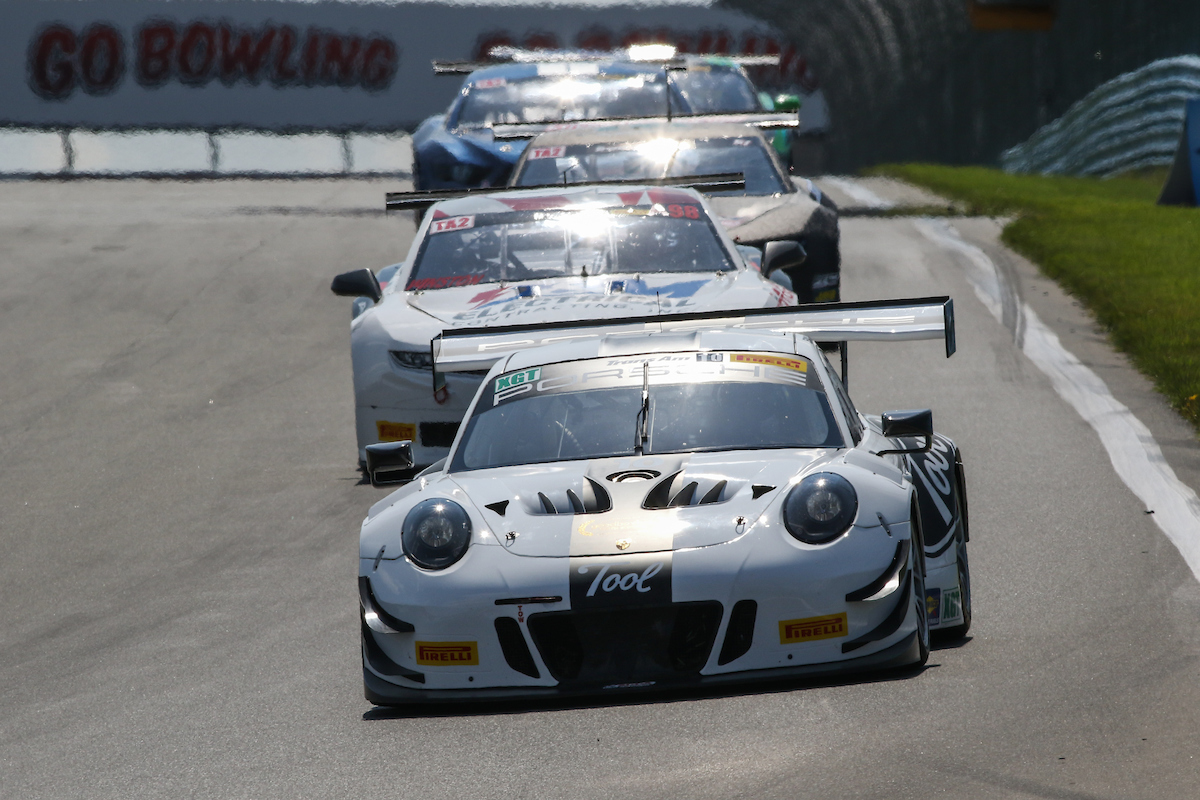 “That’s hard to say, because we had so many good races,” he said. “The race weekend at Watkins Glen was really fun. It was an all-class race, which is a little hairy for us. Our qualifying time would have put us sixth or seventh overall out of around 60 cars, but they put us behind all the TA and TA2® cars, on the pole for the GT cars – which was about 50th. So there was a lot of overtaking throughout the course of the Saturday and Sunday races. That was a very memorable weekend, and we escaped with two wins.

“I consider [WeatherTech Raceway] Laguna Seca my home track, and that was another highlight. We finished third overall, beating all but two of the TA cars. COTA was also a very memorable race. I love the track with all of its varied challenges. We lost the lead there, and managed to regain it on the second-to-the-last lap. It was a crazy finish!”

Joiner races a 2016 GT3R Porsche with a championship heritage.

“It was a factory-supported Porsche, and Patrick Long and Jorg Bergmeister were the two factory drivers,” he said. “They won a
(SRO World Challenge) championship in that car for Wright Motorsports. It’s really a well-sorted car with a fantastic race history. I feel we’ve added a nice bit of history with the car in our hands, winning a Trans Am championship.”

History also played a role in the livery carried on Joiner’s Porsche.

Growing up in Redondo Beach, Calif., Erich’s father often took him to nearby Torrance to visit Vasak Polak’s Porsche dealership and see the various cars that were on display.

“Over the years we heard that there was a place where he housed all of the race cars and parts,” he said. “We found out where it was, and we’d walk in there and there would be Porsche cars and engines all over the place – 917s, 935s … He used to get all of the Porsche engines and stuff that they no longer had any use for shipped to him from Germany.

“When he passed 20 years ago, I ended up buying that building. One of the reasons I decided to run the livery on my current car, predominately white with a little bit of black, is that’s how Vasek ran his cars. We put the name Vasek at the bottom of the doors as a little bit of homage to him. One of his cars won the Trans Am championship [with driver George Follmer] in 1976. It was cool this year when fans at Watkins Glen and other tracks came up with smiles on their faces – they remembered Vasek running in Trans Am, and they loved to see a Porsche run predominately against V-8s.”

“We opened a coffee roaster and a coffee shop five years ago, and we named it after our dog Bob – using a phrase we often here in our house,” he said. “We now have three shops in the L.A. area, and are in the process of opening Numbers 4 and 5. Since there were no spectators allowed for our California races, we called up [TA President] John Clagett and asked if we could bring freshly roasted coffee to give away free to the racers, crews and corner workers. It was meant to be a one-time thing, but they asked at the next race if we would be doing coffee. That became part of our season. We built a coffee bar at the back of our hauler, and it became a nice ritual on the mornings during the race weekends.”

For 2022, Joiner is looking to return to Trans Am, but is unsure of the details.

“It might be in the Porsche or a different car, but we’ll definitely be back racing in the Trans Am.”

While Joiner competes under the Tool Racing banner, don’t go looking to him to pick up a set of wrenches. Tool Racing is actually a commercial production company. His many credits include the story of Chip Ganassi’s Ford GT program, along with a popular All State commercial from the 2021 Super Bowl. But that’s another story...

Trans Am’s 2022National roster of races will be staged at legendary venues across the United States as part of SpeedTour, IndyCar Series and NASCAR events with the season kicking off at Sebring International Raceway February 24-27.

The Trans Am Series presented by Pirelli Western Championship returns for its sixth season in 2022, visiting iconic tracks in the Western half of the United States in conjunction with the SportsCar Vintage Racing Association (SVRA) SpeedTour. The series will open its 2022 season at Thunderhill Raceway April 9-10. For a full schedule and more information on the Trans Am Series, visit www.GoTransAm.com.