AUSTIN (7 November 2021) – Matt Brabham made his Trans Am Series presented by Pirelli debut a race to remember, passing Ernie Francis Jr. in the final 50 feet on the last lap to win by 0.393 seconds on Sunday at Circuit of the Americas during the Heacock Classic season finale. 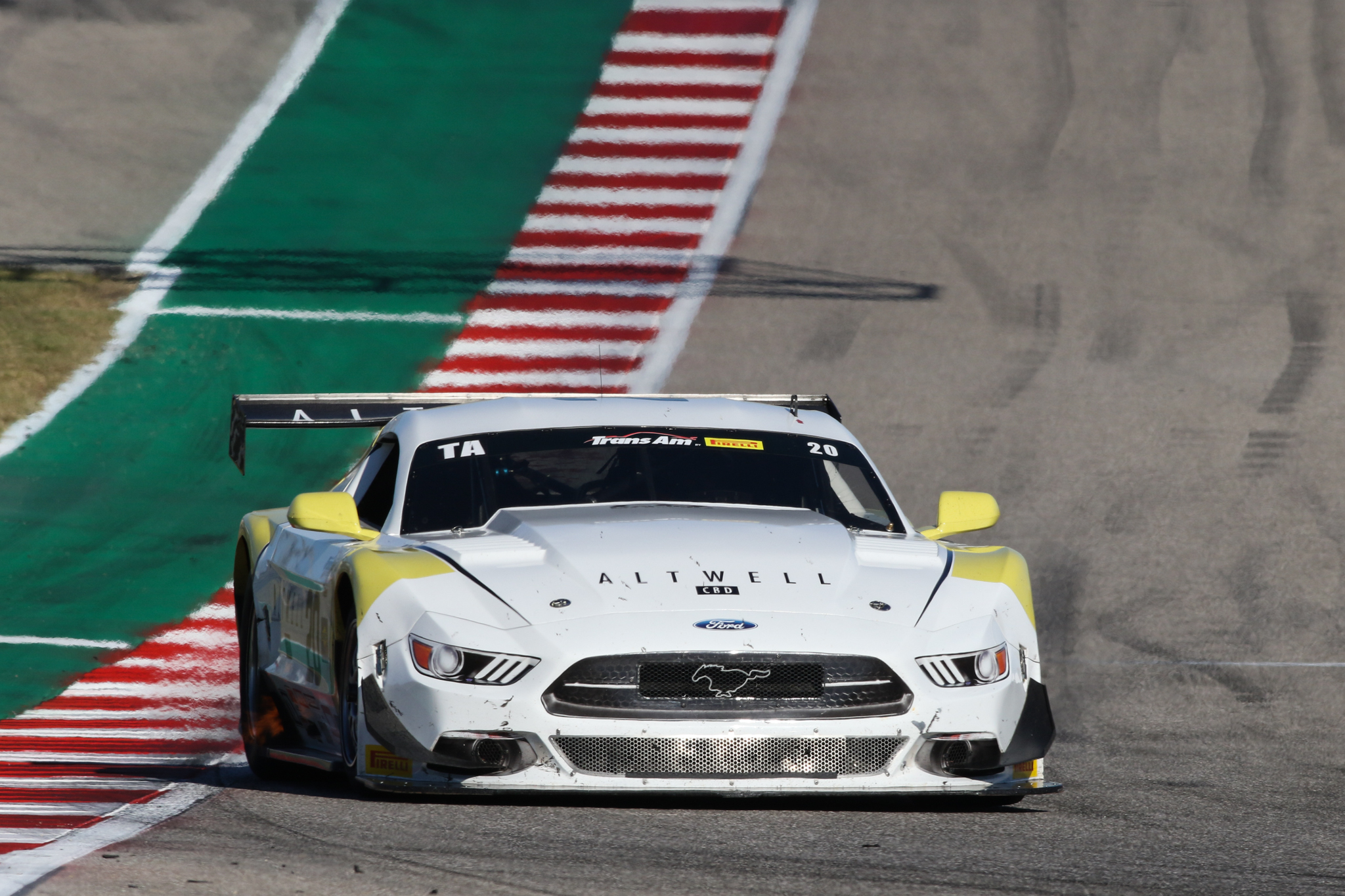 A late caution set up a two-lap fender-rubbing dash to the checkered flag. Francis Jr., who had led every lap from the pole in the No. 98 Future Star Racing Ford Mustang despite constant pressure by Brabham, had to settle for second. Brabham was filling in for Chris Dyson in the No. 20 ATWELL CBD Ford Mustang, who sat out the finale due to family matters. (Race Results)

“I was surprised, I just got a run on Ernie (Francis Jr.) on the last lap,” Brabham said. “It was the last lap, and I thought he had it because I wasn’t close enough. I had made some in-car adjustments and I managed to be fastest in the Esses at the end, and I got a run down the back straight. I was surprised he gave me a car length, so I stuck it down in the inside and we ran side by side. The track limits for both of us went out the window, and I got a little tap in the last corner as he was trying to get me a little loose coming to the checkered flag.

“That was so much fun, racing like that, door to door, leaning on each other and coming to the checkered,” added  Brabham, who won the SVRA Formula B group earlier in the day driving a 1971 Brabham BT35. “That was awesome, and I can't thank Chris Dyson and CD Racing enough for the opportunity.”

Francis Jr. got off to a great start and pulled out a two-second lead after four laps. Brabham then came on strong. The third-generation racer needed only three laps to get within one second of Francis Jr., and he was able to stay within several-tenths of a second for the lead, lap after lap.

Caution waved for the second time on lap 26, setting up the two-lap shootout. Francis Jr. started to slow, losing oil pressure on the final lap. The pair raced side-by-side before Brabham made a move to the outside to make his one and only pass just feet from the finish line.

"It wouldn't have been our 2021 season if something didn't happen;  I lost oil pressure on the final lap," Francis Jr. said. "I am glad to finish this race in the car, the last few races have been tough for us and we've struggled a lot this season. I am proud of the team for creating a car that finished the race, and was super-fast all weekend. 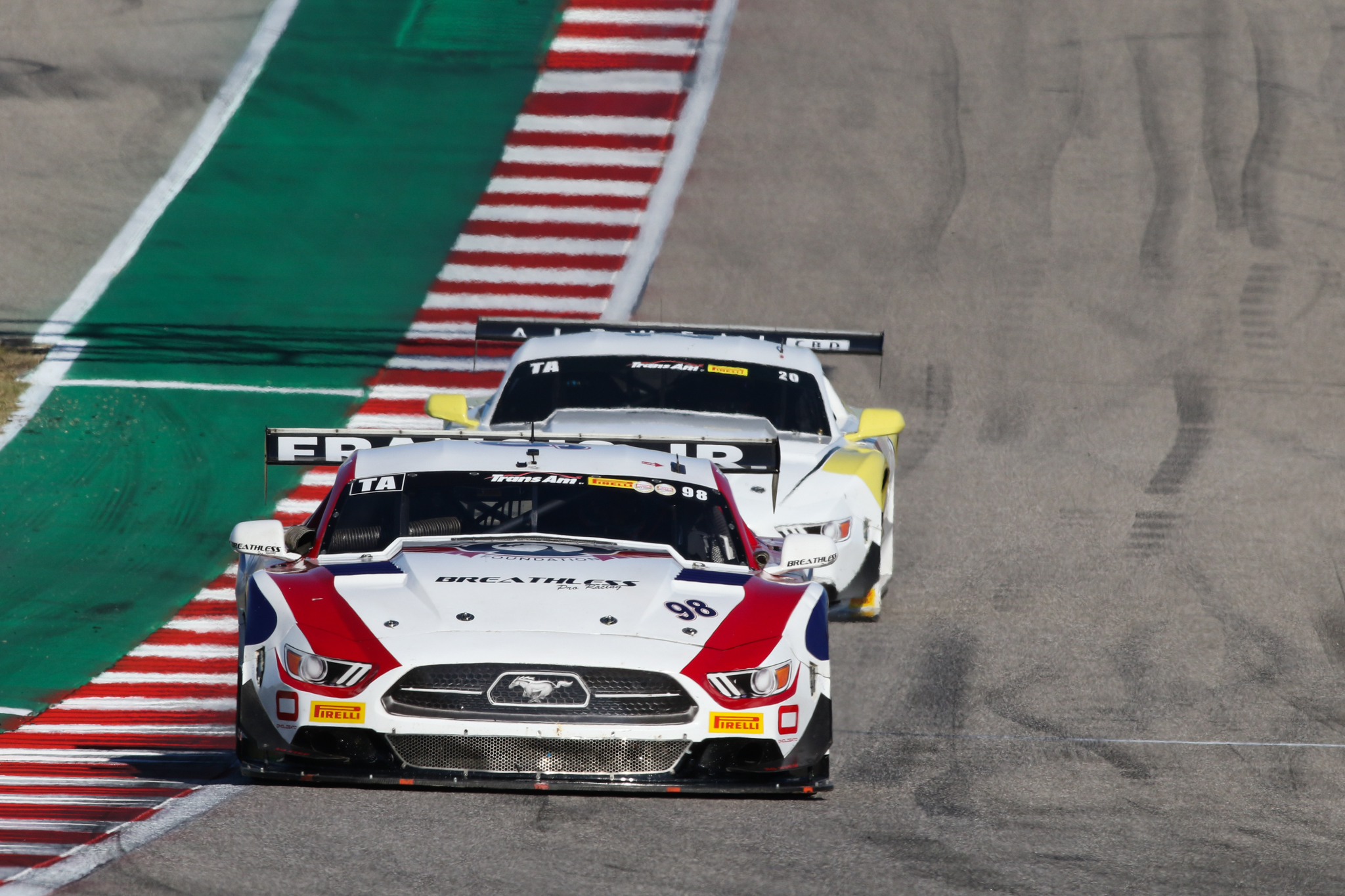 "In the race, I was feeling super good and Matt (Brabham) was just staying with us the whole time," Francis Jr. continued "It was a great race out there with him though. Matt and I had a great battle those last few laps, we were side-by-side about half way through the last lap. That's one of my best battles I've had in Trans Am. I am looking forward to what's next."

The late sprint also helped Tomy Drissi gain the podium. The driver of the No. 8 Lucas Oil Chevrolet Camaro lost third midway through the race to 2021 ProAm Challenge champion Oscar Teran, driving the No. 3 Oscar Teran Racing Ford Mustang. Drissi regained third with a pass on the final lap.

“I just didn’t have it today, and Oscar (Teran) ran a good race,” Drissi said. “The car didn’t turn very well. The late yellow came out, which was lucky for us. Then we went side by side in a couple of areas where you aren’t supposed to be, and it worked out. Thank you Lucas Slick Mist, and thank you to the guys at Burtin Racing for working so hard.”

The late restart impacted the three other classes as well. 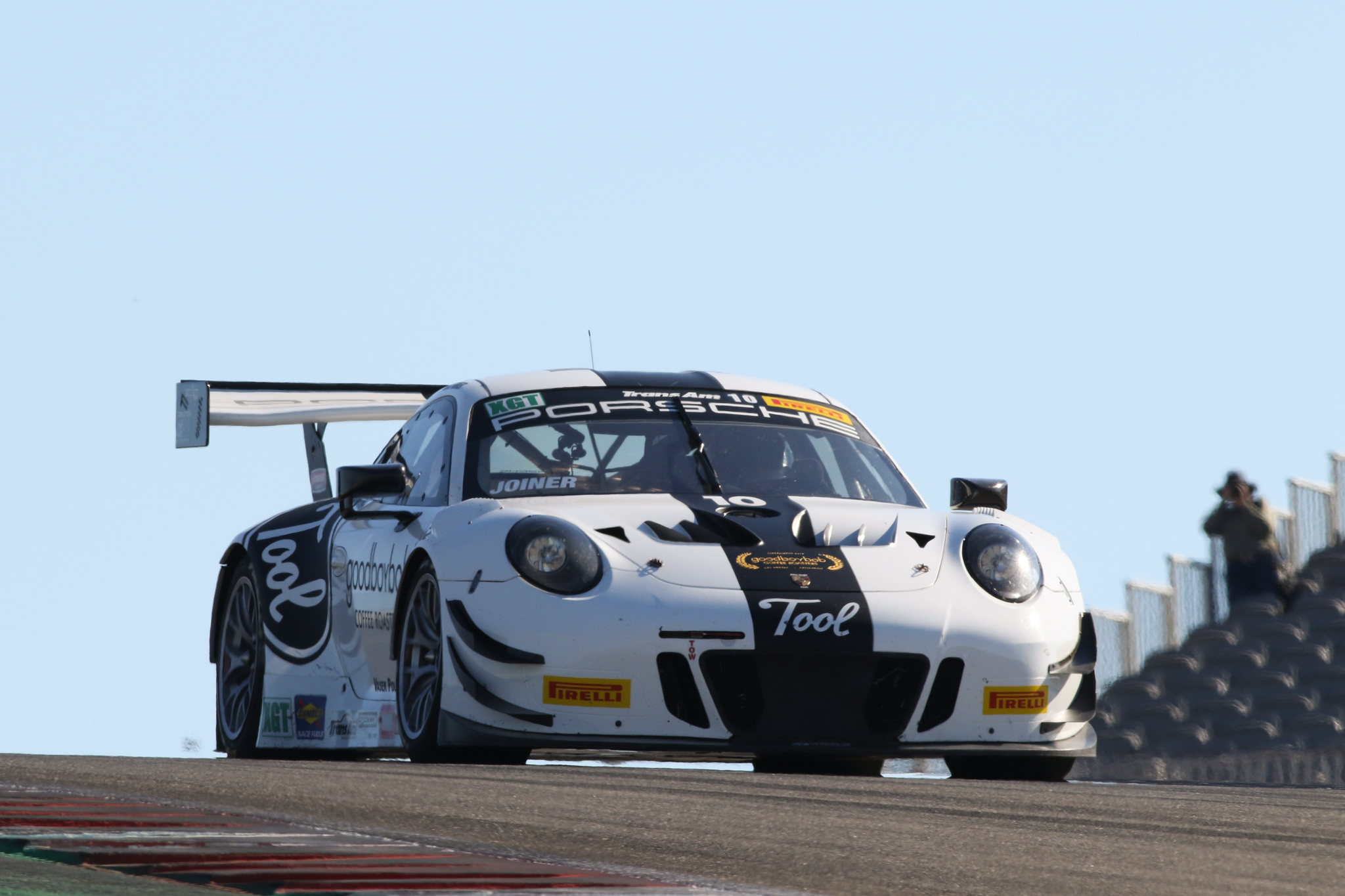 Erich Joiner won in XGT, passing Jason Hart with two laps remaining. Joiner remained undefeated in seven races driving the No. 10 Good Boy Bob Coffee Porsche 991 GT3 R, and led the opening 11 laps. Hart – a veteran racer/coach – took over the lead on lap 12, and held it until Joiner regained the point after the final restart.

“We had a really great race today at Austin – a world-class track – especially with our GT cars,” Joiner said. “Jason and I had a really good battle. I started out in the lead; he got around me, and I let my tires cool and regroup a little to make a run at him for the end of the race. Fortunately, it worked out. He’s a heck of a driver and he has a beautiful car, but boy, the Porsche handled beautifully and the braking is phenomenal.”

Hart was a late replacement for fellow Texan Mike Weathers in the No. 48 GSpeed Corvette. It was his fourth Trans Am race and his first podium finish of the season. Hart's most recent result was a fourth-place finish from the pole in TA2® at Watkins Glen in 2017.

Justin Oakes started on the SGT pole and seemed headed to his seventh victory in eight races, driving the No. 11 Droneworks Corvette. 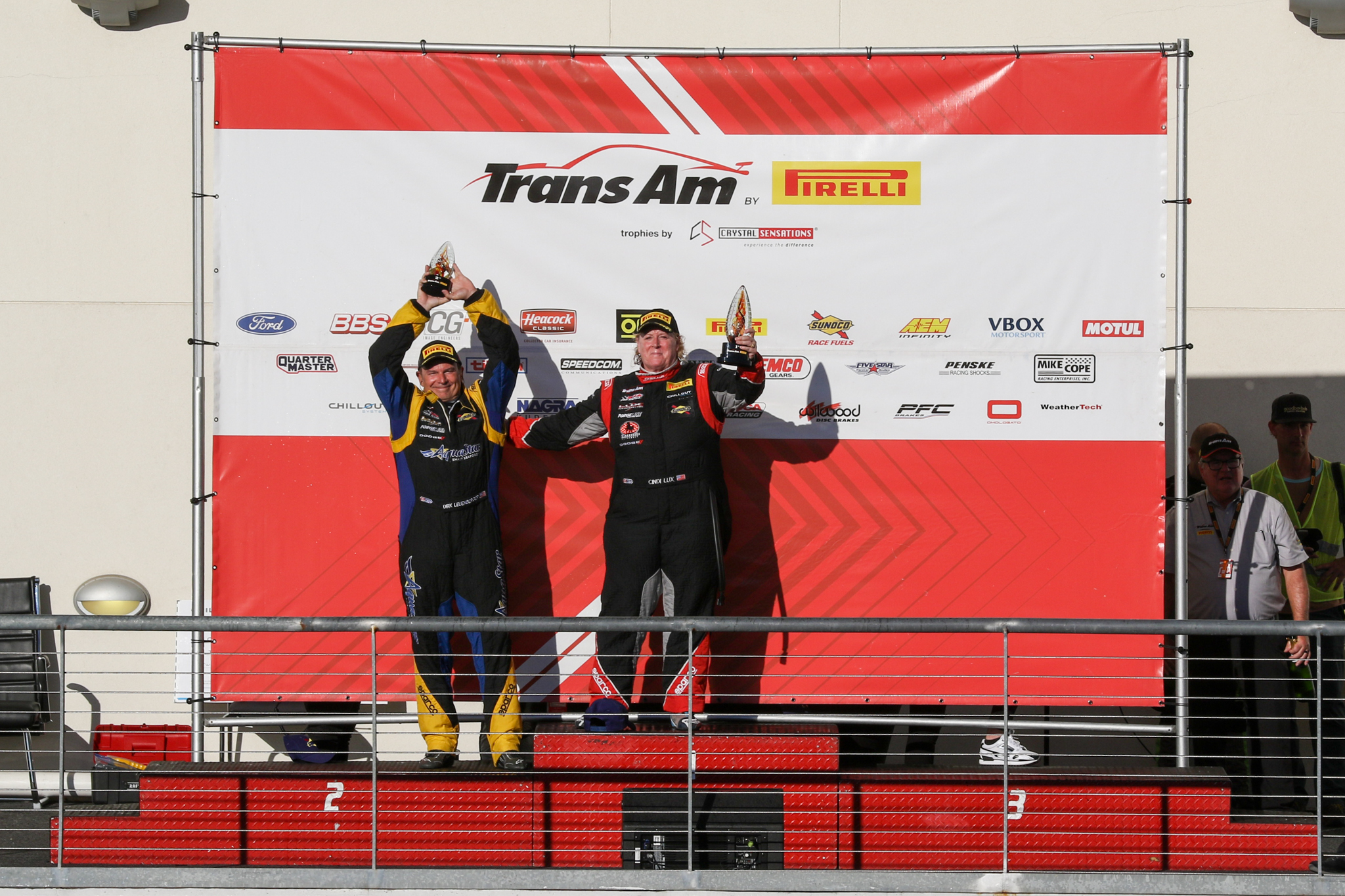 But he brought out a final caution when he encountered a problem just seven laps from the finish. That gave  the lead in SGT to Cindi Lux, driving the No. 45 Lux Performance/Black Rock Coffee Dodge Viper. The Oregon driver scored her her fourth-consecutive, and seventh career, SGT West Coast victory after coming home ninth overall.

"It was a good day for Lux Performance, both of our Vipers were represented on the podium today," said Lux. "I just kept my head down and worked my way around the action. This is the first time that a West Coast car has finished in front of the National Series group, so today was a big deal for the whole team."

"Wow, my first win in the National Series, and we got the ProAm SGT title!” said Decker. "The Ave Motorsports team is just amazing, I love working with all of them. I wouldn't be here without the support of my sponsors, who joined me at the track today." 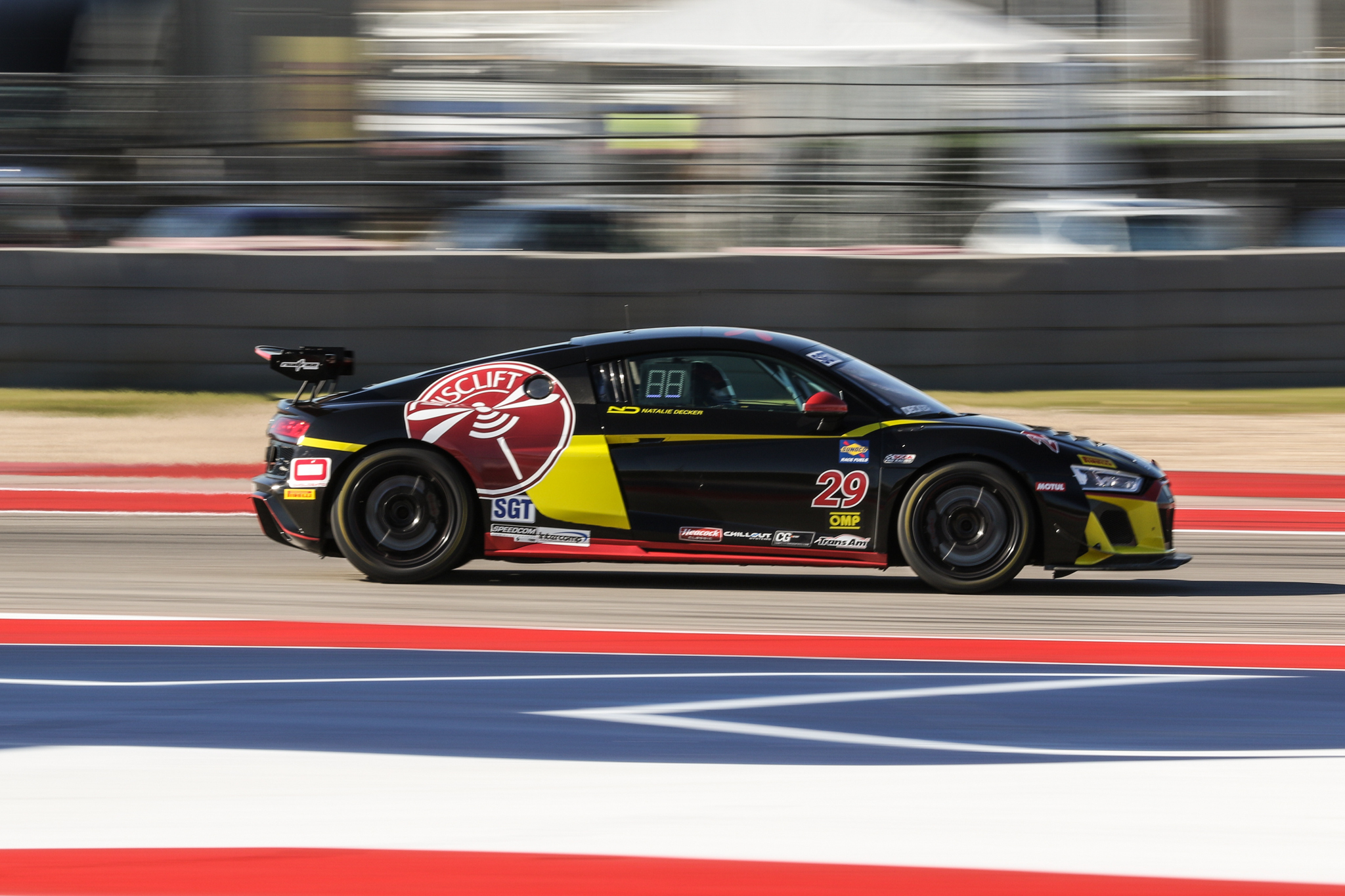 Mirroring the overall result, Austin driver Sean Young took GT honors in his Trans Am debut. The driver of the No. 74 Corsair Racing Ginetta GT 55 GT4 passed Paul Costas in the No. 13 GSpeed Corvette on the final lap to win in his first Trans Am start.

"The car was absolutely beautiful out there today," said Young. "It was a tough race with a lot of action. It's an honor to win at Circuit of The Americas."

Following the winter break, Trans Am opens its 55th season on February 24 at Sebring International Raceway.