Nashville, Tenn. (7 August 2021)- Mike Skeen used a pair of restarts to win the first race ever held on the streets of Nashville on Saturday, capturing his ninth career TA2® Trans Am Series presented by Pirelli victory in the Big Machine Vodka Spiked Coolers presents the Franklin Road Classic with Race for RP. (VIDEO: TA2 Onboard from Music City GP Course)

Leading 24 of the 42 laps, Skeen prevailed in a two-lap shootout to win his second race of the campaign in the No. 1 Liqui-Moly/Turn 14 Distribution Chevrolet Camaro.

“Stevens-Miller Racing gave me an awesome car this whole weekend and I’m so happy we could keep it clean, bring it home, get a strong finish and collect a few points on our competition,” Skeen said. “We had a lot of back and forth, Connor [Mosack] and I, and I was also trying to hold off Thomas [Merrill], so there was a lot of close, tight racing. The pressure was on the entire race. It was an absolute blast, I didn’t expect that much passing! It’s tight out there, so it was tough to set up a clean pass without forcing the issue, but the layout was fun.” 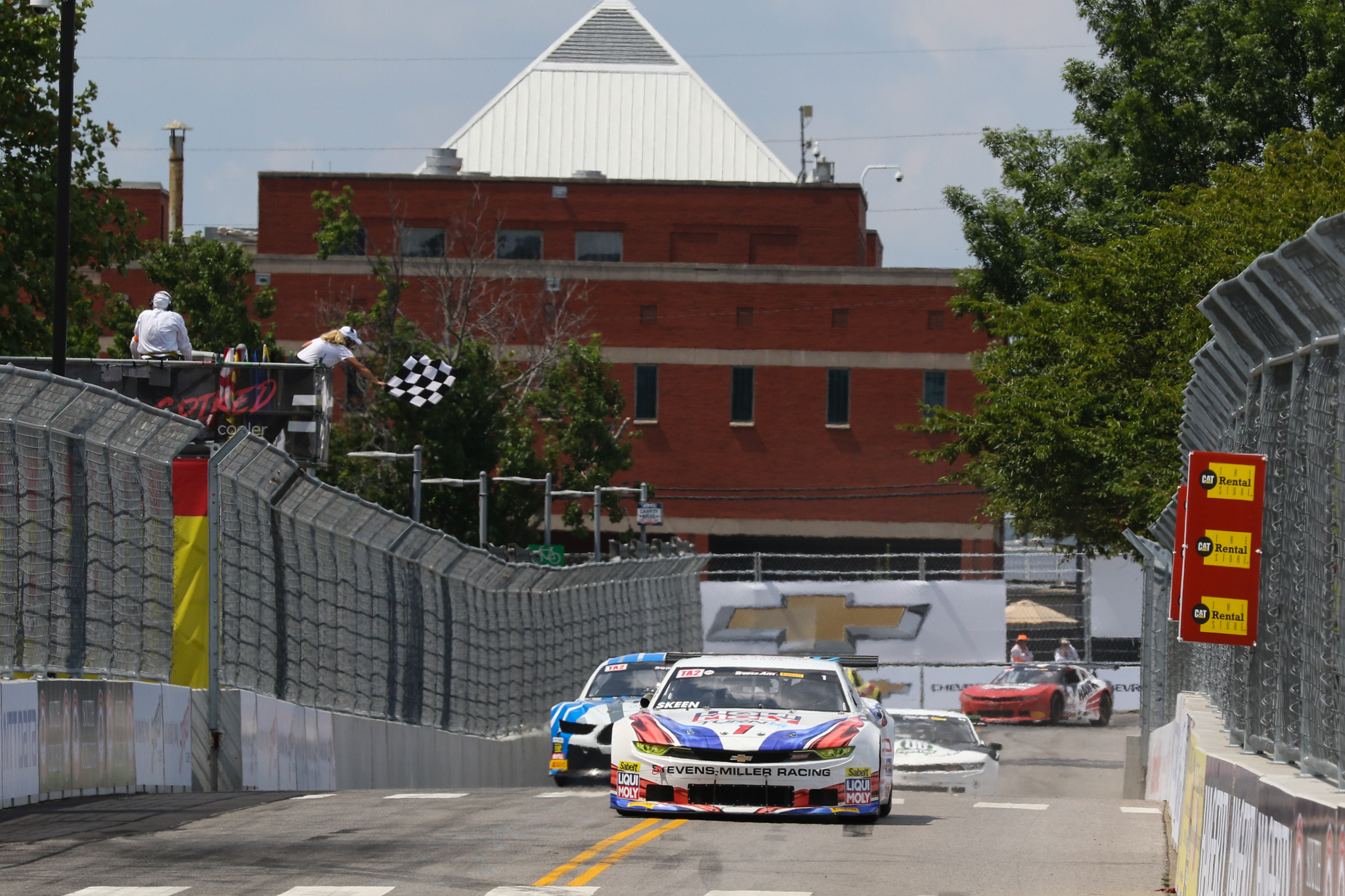 Merrill ran in podium contention for the entire race in the No. 81 HP Tuners/Mike Cope Race Cars Ford Mustang. He wound up second, trailing Skeen by 0.185-seconds at the checkered flag.

“It is so hot, but this is so awesome,” Merrill said. “I’ve never done a street race before – what a crowd, what a track! Our Cope car was really fast today, but we lacked a bit of torque coming off the corners so we really had to challenge the brake zones, which made it pretty exciting. It was pretty hot in the car, so I was glad to get a little air conditioning modification when I tagged the wall – it folded my door down and that gave me more air flow. We didn’t measure it today but we’ve seen 150 degrees in the past, and it was every bit of that out there. But full credit to Mike, he was the class of the field today and did a great job.”

Skeen started on the pole and led a terrific four-car battle in the early going. Connor Mosack grabbed the lead in a left-hand turn on the tight 12-turn, 2.17-mile temporary course, chased by Skeen, Merrill and Adam Andretti.

Mosack then led nine laps in the No. 28 NicTailor/FS M1-SLR Chevrolet Camaro. The first of two cautions allowed Skeen and the field to close in. On the first restart, Skeen regained the lead as Mosack fell back to fifth.

The restart also gave new life to Rafa Matos in the No. 88 3-Dimensional Services Ford Mustang. Starting back in 18th, Matos slowly worked his way through the pack on the difficult circuit. He was up to fifth when the caution came out, but 10 seconds in arrears. 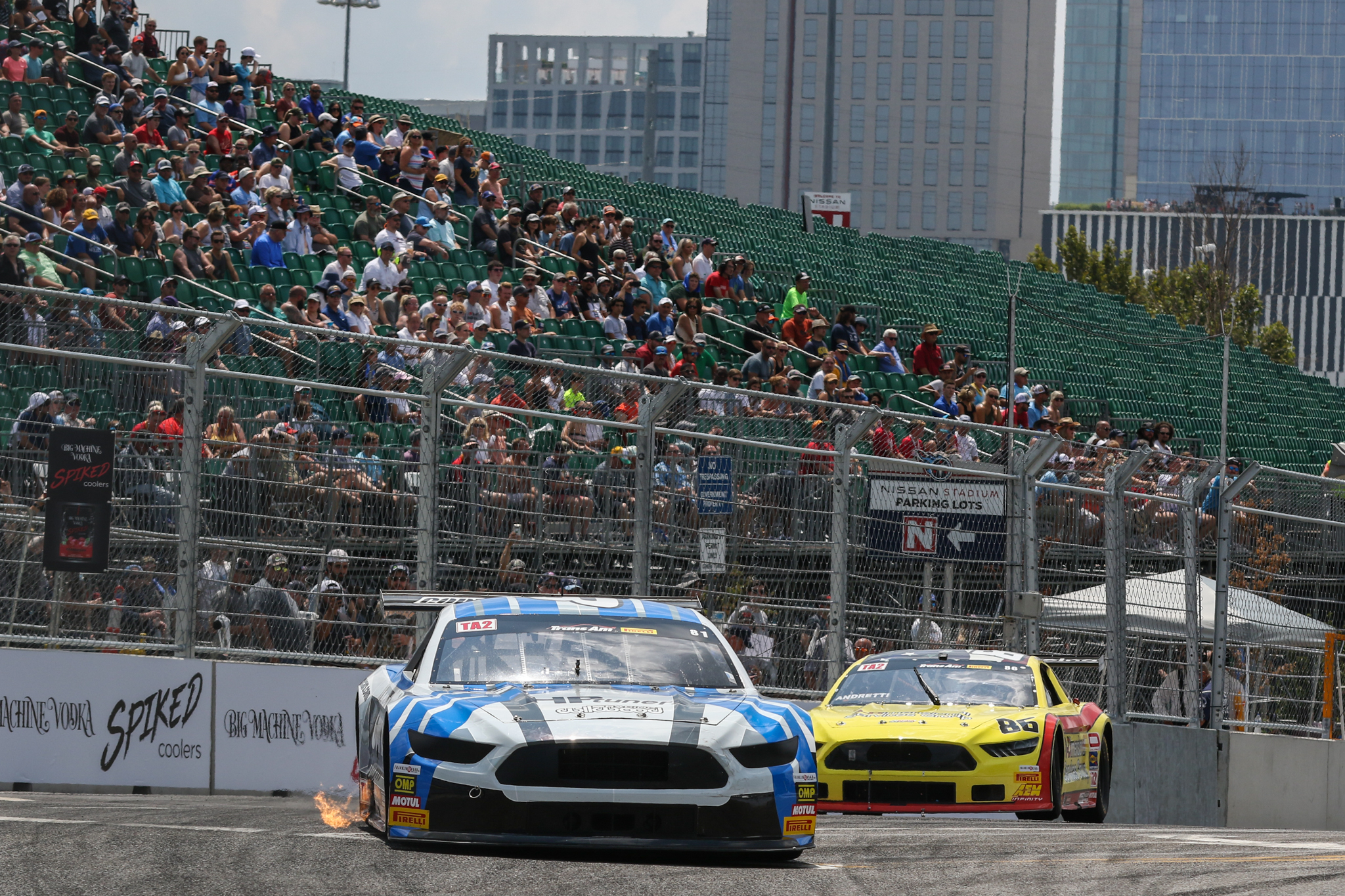 Matos quickly took second after the restart and began challenging Skeen. But not for long, as his yellow Mustang began falling back. He held on to finish seventh. Andretti took over the fight from his teammate in the No. 86 3-Dimensional Mustang. He passed Skeen for the lead on lap 33. One lap later, his Mustang began smoking, and he went to the pits, handing the lead back to Skeen.

A number of separate incidents brought out a second caution with a scheduled 11 laps remaining. By the time the track was cleared, there was only enough time to run two laps. Skeen got the jump, as Mosack battled Merrill for second. Mosack matched his career best by placing third, 2.040-seconds back.

“I think we had the car to beat, especially in the long runs,” Mosack said. “It just took us a couple of laps to get going and I couldn’t stay with Skeen. But as the race went on, I felt as though he started sliding around more and I had good grip, so I was able to use a lapped car and get by him. I didn’t think he could get back by, but on the restart and on cold tires, I locked the rear tires and he got by. I’d had contact earlier in the race and that made the car more unpredictable, but I hated to give the race away like that. I had the speed and we were running him down at the end, if we’d had more laps.”

Nashville race promoter Justin Marks finished fourth in the No. 99 BC Forever/M1-SlR/Fields Camaro, followed by current SGT championship leader Justin Oakes in the No. 11 Droneworks Camaro, and Road Atlanta winner Franklin Futrelle in the No. 58 Amada Analtics/Innoviv Ford Mustang.

Local driver and race sponsor Ken Thwaits – the 2020 XGT champion who now competes in TA – was the top Master with a 14th-place finish in the No. 6 Franklin Road Apparel Ford Mustang.

“I knew something special was going to happen today – with me living here and all the buzz in the city,” Thwaits said. ““That was wild! Everyone has just shown up this week, and I’m so glad I could pull this off. Qualifying just didn’t work out for us and we started 31st, so, we had nothing to lose – just put our head down and started after it. See car, pass car! I’m glad to be a part of the Masters class, it just shows that you can have fun at any age. And these young guys really put on a show and really showed respect. I’m proud to be from Nashville and I’m so proud of this event. It’s world class.” 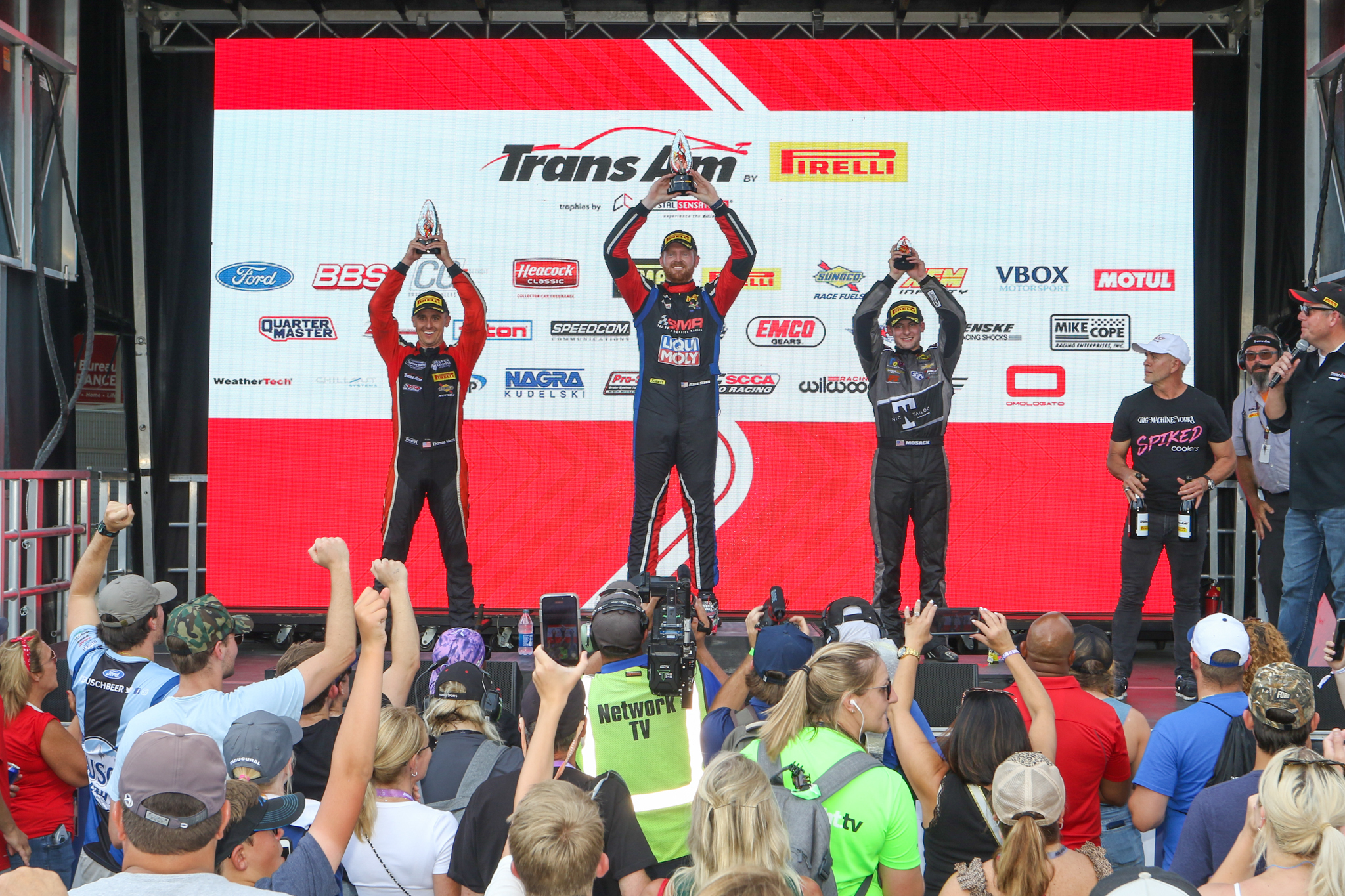 Following the race, Skeen and Merrill echoed the thoughts of the Trans Am paddock in his victory remarks.

“Thank you, Nashville, this has been a fantastic event!” Skeen said. “Thanks to all the fans who came out. It’s been awesome to come back to a street course and to have this many people out here is awesome.”

“And thanks to Scott Borchetta and everyone who made it happen, and thanks to all the fans who came out!” Merrill said. “To see all the people out there was motivation for all of us!”

The TA2® competitors will join their TA, XGT, SGT and GT counterparts for the next event on the Trans Am Series presented by Pirelli schedule – a pair of combined-class races at Watkins Glen International on Sept. 11-12.