Champion stories from Trans Am to you

Lee Saunders seemed to have everything going his way at the beginning of the 2020 Trans Am Series presented by Pirelli competition.

The Lakeland, Florida, driver won four of the opening five SGT races to open a comfortable lead in the standings. However, back-to-back sixth-place finishes in the combined race at VIRginia International Raceway and Circuit of The Americas allowed Adrian Wlostowski to close in entering the final weekend of the season.

“We got hit [in the combined race] at VIR while passing for second,” Saunders explained. “Lou Gigliotti got off track and went sideways right in front of me. I had nowhere to go, and that was the end of that deal. We got everything back together, but evidently not good enough. We went to CoTA and had one thing go wrong after another. We broke on the first lap there. It was a terrible weekend for us – we changed everything but the driver! That sure made it interesting at Road Atlanta.” (Watch the crash between Gigliotti and Saunders)

Saunders ended the year on a high note with a pair of podium finishes at Road Atlanta to claim his second Trans Am title by seven points.

“It’s amazing [winning the championship],” he said. “I never thought we would get one, much less two. Especially with how crazy this year was. It was a battle all the way to the end.”

Helped by some of his racing buddies from his hometown, Saunders worked late following the Saturday race at Road Atlanta, changing the entire rear end assembly.

“We were back at it hard, “Saunders said, “trying to get ready for Sunday.” 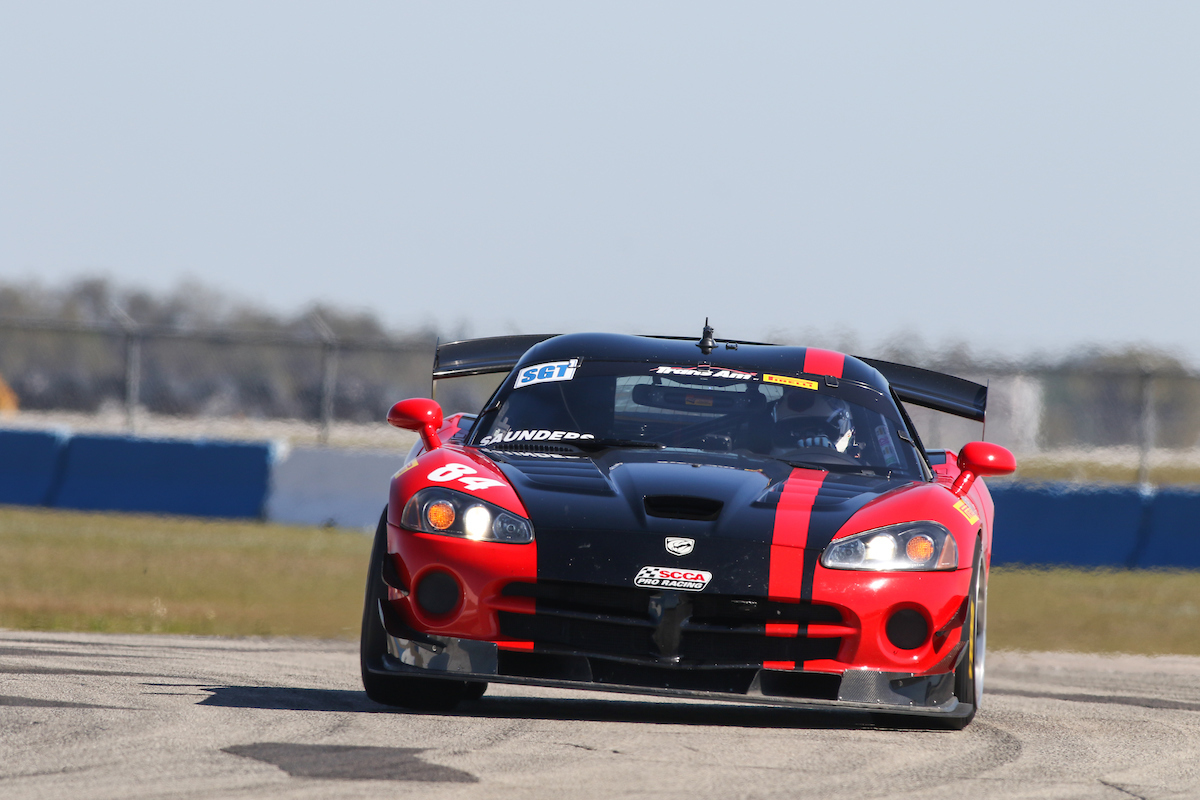 Saunders made his Trans Am debut by winning the TA3 International class at Sebring in 2015. He ended the year with a pair of victories and three podiums. The following season, Saunders captured the TA3 INT championship, winning two races, three poles and scoring seven podium finishes in his Dodge Viper.

“Both championships were tough, but this one was tougher,” Saunders said. “We got a lot more competition, almost all the races had more cars than ’15, and the rules package is a lot closer for everybody. And with all the craziness going on this year, just trying to keep up with the schedule changes was pretty wild. It was definitely a different experience.”

Travel restrictions also forced him to use different crewmen at every race. His main crew had Kevin Smith of Gainesville, Florida, with KSR Performance, and Jamie Kwiatek of Lakeland Speed and Custom, alternated as crew chief, depending on their availability. Others included Dylan Brickner and Jeremy of Lakeland Speed and Custom. Pirelli Tire and AP Rotors also assisted the effort.

Saunders has been running the same Dodge Viper – obviously with upgrades – since he started in Trans Am in 2015. He’s logged 12 victories and 25 podiums for his career in the Viper.

“I’d love to run them all next year,” Saunders said. “I’ll have to see how funding goes. That’s what prevented us from running full schedules before, even when we had a good start to the season. When we won the championship in 2016, we really had to cut back for ’16 and ’17. Opening at Sebring close to home really helps. If we’re leading the points, I’ll want to keep running.”

Asked for a season highlight, Saunders did not single out one of his victories, but his experiences in the paddock.

“The wins were awesome, but spending time with my family was big, because they got to come to all of the races in our motorhome, which has never happened before,” Saunders said. “But I would have to say one of the biggest highlights was getting to be friends with Adrian [Wlostowski]. What a great guy! We had talked a little bit last year, but we really hit it off this year. We got to become really good friends with him and his team, and they would do anything to help us. And we’d do anything to help them. He gave us a heck of a run – he was down to seven points at the end. They had some tough luck – like we did – and it could have gone either way.”

Fans can watch Saunders and the rest of the production class- XGT, SGT and GT- in action on CBS Sports Network’s Trans Am Year in Review special December 27 at 1:00 p.m. Eastern. The first episode (which features the TA class) airs this Sunday at 4:00 p.m. Eastern.