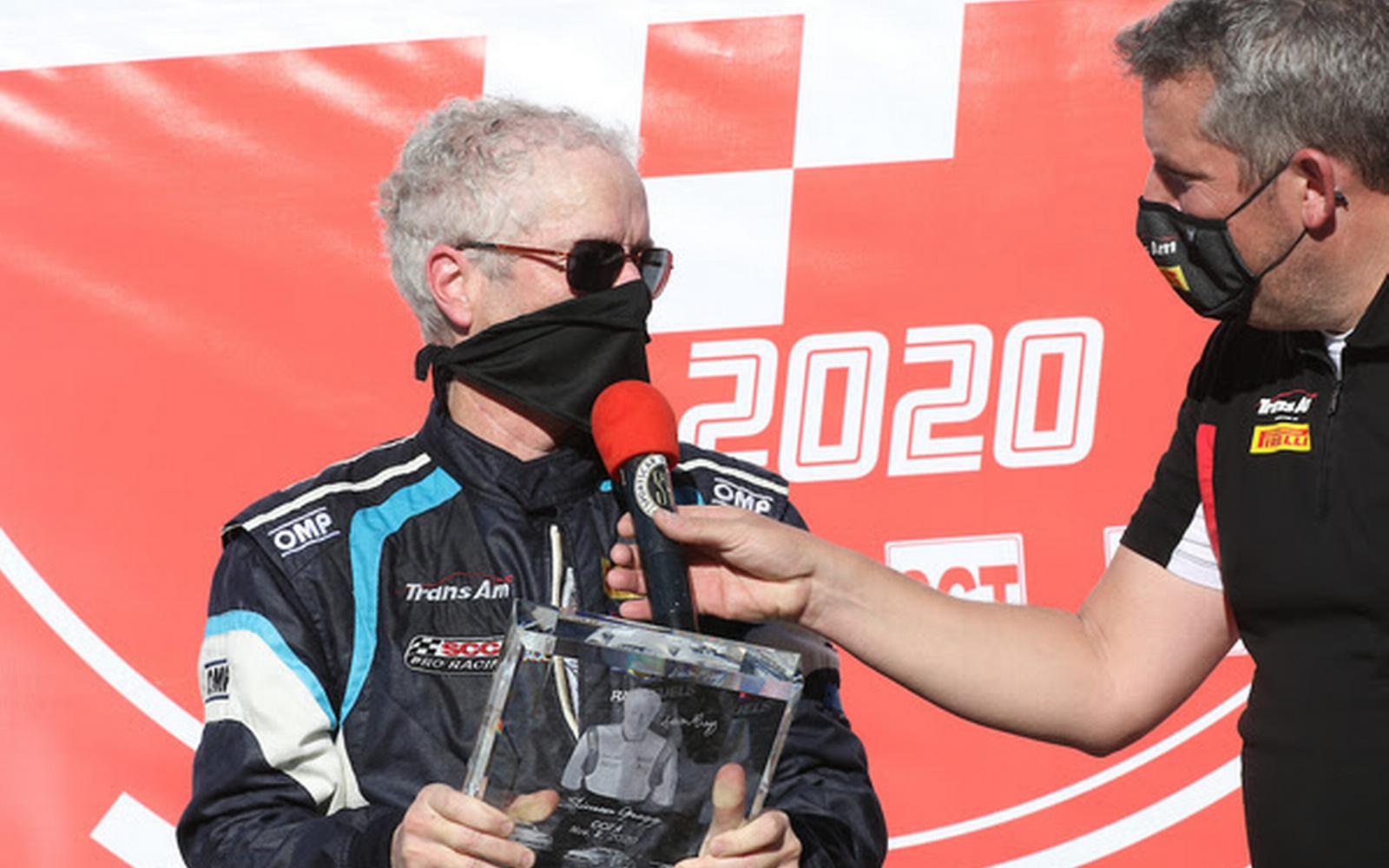 Austin, TEXAS - November 10, 2020 - Round 7 of the 2020 Trans Am presented by Pirelli Championship season at Circuit of the Americas in Austin, Texas was a special occasion for the Florida based pilot Simon Gregg. A sixth place finish in his No. 59 Chevrolet Camaro and a podium ceremony for Simon was in order as he was honored Sunday for notching his 200th race in Trans Am, a highly impressive total. On a very warm and sunny autumn day that mirrored the atmosphere in the paddock, the 2012 Trans Am Champion, who was runner-up in each of the following two seasons, was clearly delighted at the award. Reaching a notable milestone is a testament to his expertise and durability in the most arduous and competitive muscle car series in the world.

Described as a 'legend' by the on course Trans Am livestream reporter as he congratulated on his landmark achievement, Simon introduced his fiance to the viewing public in the paddock after the race. It was clearly a very fulfilling day for him at a track that he would admit isn't his favorite from a driving perspective.

"I can't believe it's race number 200," stated Simon while climbing out of the cockpit of the Derhaag Motorsports Camaro. He went on to comment on the race, "The competition was fair, there were no incidents so I'm happy to finish." Before adding with trademark honesty, "The result of sixth place wasn't that great for us but that atmosphere at COTA this weekend was really good."

A typically smooth drive from Simon saw him improve one place from P7 on the grid to P6 at the checkered flag following the early retirement of Chris Dyson.

Simon recorded a time of 2:14:778 in the second testing session and bettered that with 2:13:569 in qualifying for P7. With a fastest lap in the race of 2:15:920, Simon scored 20 Championship points, a number that keeps him in a hugely creditable fourth place overall in the Drivers Championship subject to final result confirmation.

Next up for Trans Am is the double-header weekend at Road Atlanta November 19 - 22, the Road Atlanta Grand Prix, when the second race of the weekend will again feature cars from all classes competing on the track simultaneously in one of the most spectacular events to watch!

It's also hats off to John Clagget and his dedicated staff in what has surely been the most difficult year in Trans Am, and a big thank you to everyone at COTA and the SVRA. Simon is one of the busiest drivers on the circuit, so keep an eye out for his continued progress in Trans Am.

Download the new Trans Am App and watch the race events live from the Google PlayStore or Apple.