AUSTIN, Texas (8 November 2020) – Boris Said scored a dominant victory Sunday in Trans Am Series presented by Pirelli competition at Circuit of The Americas, leading nearly all the way to win in the No. 2 Dodge Challenger to give team owner/car builder Pancho Weaver his second-consecutive CoTA victory. 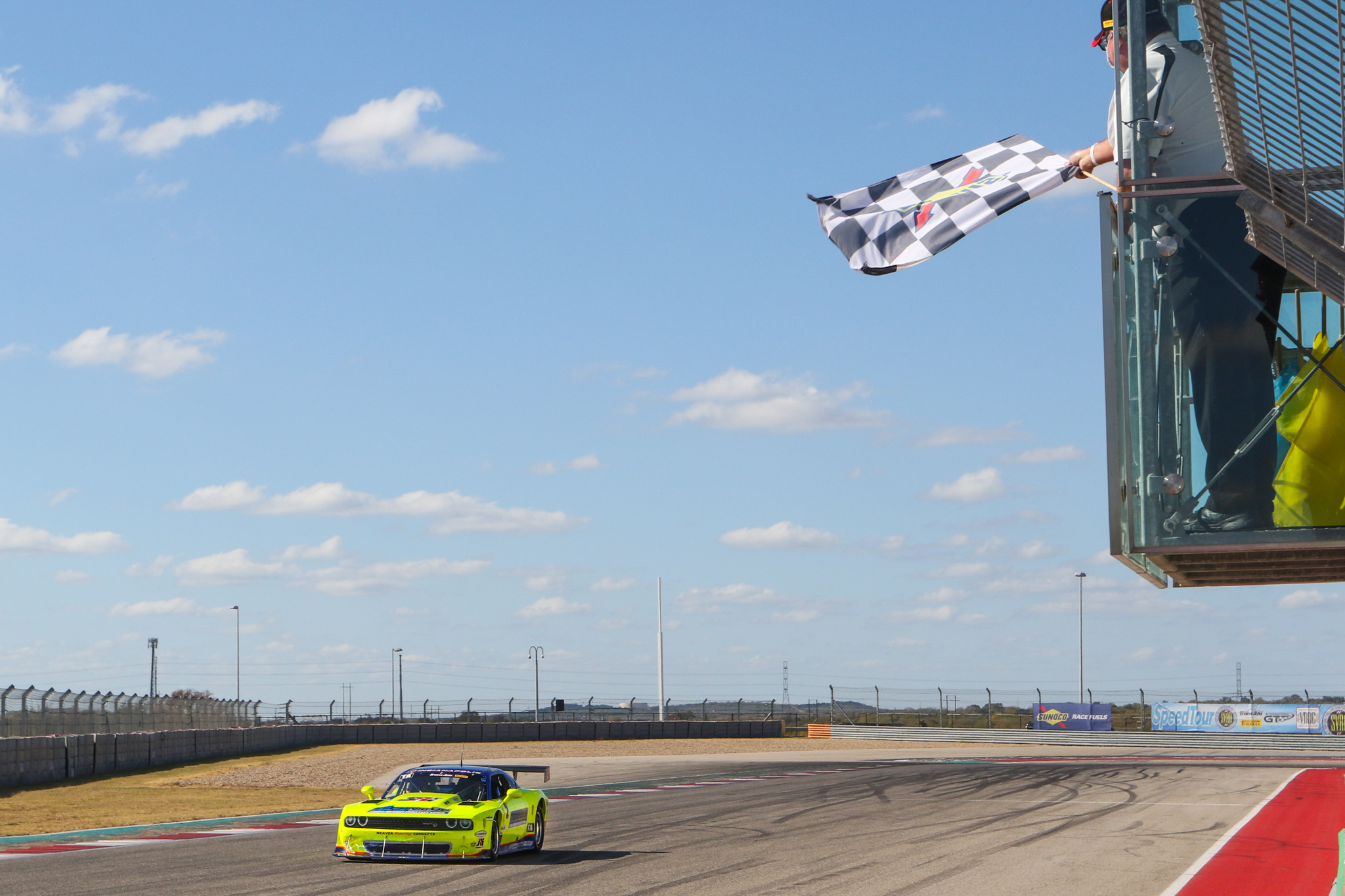 “It’s simple – Pancho (Weaver) builds a great car,” said the 2002 Trans Am champion after scoring his 17th career triumph. “Prototype Advanced Technique Inc. – the guys building the next (NASCAR) Cup car – are a great sponsor and they help us on their off time. Our winning move today was definitely going to a new transmission. Pancho’s a one-man band, but it was a family effort this weekend with everyone helping. We were broken after practice, and Greg Pickett’s guys helped, Claudio Burton’s guys and other teams. It’s funny that we can help each other off the track, and gladly put each other in the wall on the track. It’s a great series.”

In 2019, Adam Andretti took the CoTA victory in a brand-new Weaver machine.

Ernie Francis Jr. pressured Said nearly all the way - even briefly nosing ahead with 10 laps to go - but had mechanical problems in the closing laps in his No. 98 ZF Custom Concepts Ford Mustang. He held on to take second, 32.539 seconds back.

"Overall it was a really good weekend, so I can't be upset with it,” Francis said. “Really good points for us as we try to lock up our seventh championship, so overall just a great weekend for Breathless Racing. The guys had the car running flawlessly all weekend. Then we had a small mechanical issue in the race that took us out of fighting for the win, but we were able to bring it home in second. We can't wait to get to Atlanta to finish it off."

Tomy Drissi came back from a first-lap incident to finish third in the No. 8 Lucas Oil Chevrolet, 57-seconds back. 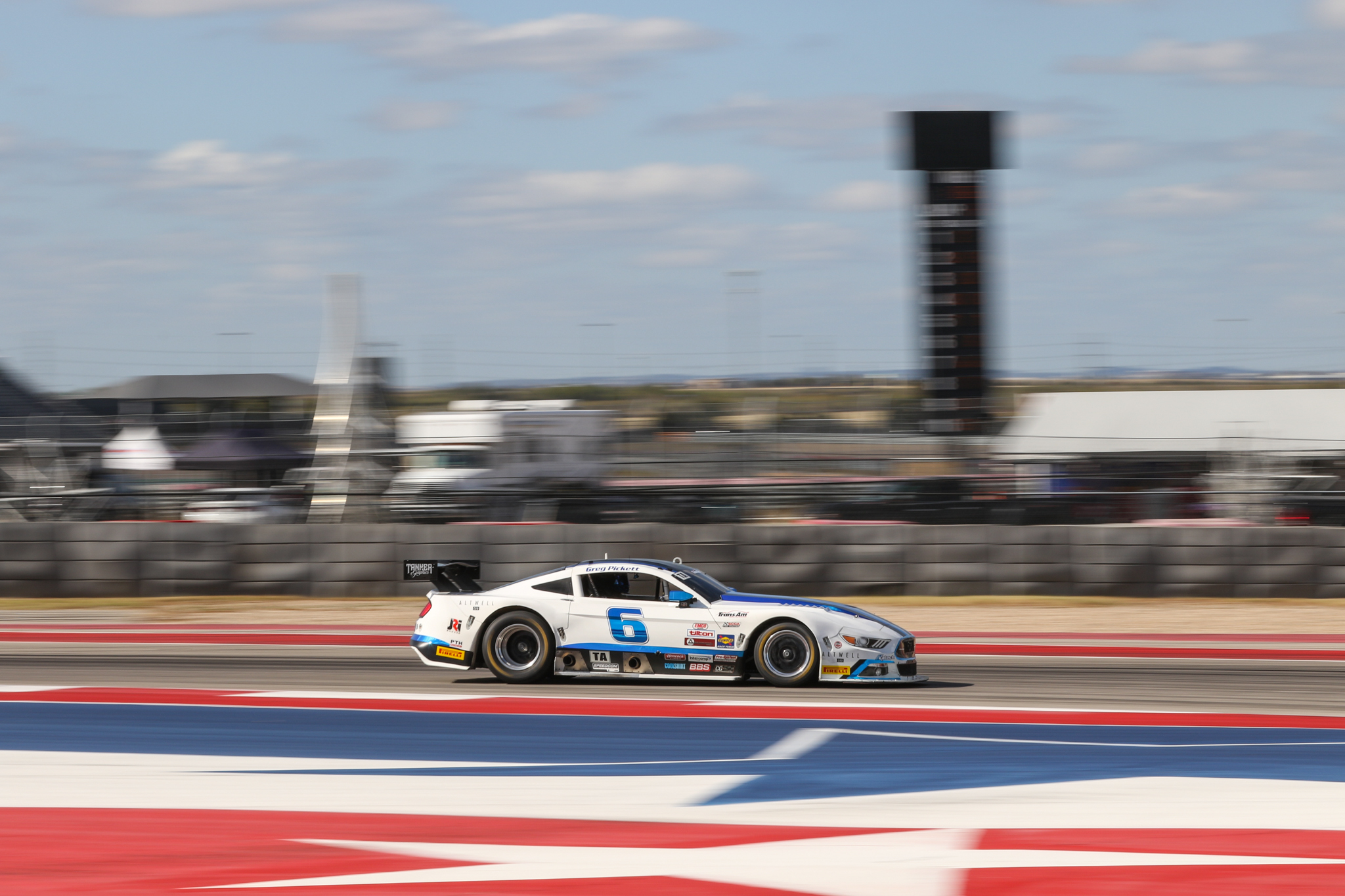 Fourth overall, and winning for the fifth time in five 2020 TA West races, was Greg Pickett in the No. 6 Pickett Racing Ford Mustang. It was his 27th victory in combined Trans Am competition dating back to 1975.

"It was a joy to be out here with guys like Boris Said and Tomy Drissi,” Pickett said. “I'm 73 years old, and they still gave me a chance. The car was fast where it needed to be, I love this track, I love Texas, I love Trans Am racing."

Amy Ruman got up to third on the opening lap before an incident with Drissi, and wound up sixth in the No. 23 McNicholls Company Corvette. She was followed by Simon Gregg, making his 200th career start in the No. 59 Derhaag Motorsports Camaro.

Gregg was honored on the podium with a special Crystal Sensations Trophy for his achievement.

“It feels great to achieve 200 races in Trans Am, this is a wonderful award,” Gregg said. “Thank you to Trans Am. It’s good to be around this long. I plan on having many more races. It was a great day today. I could have finished a little higher, but it was not fault to the team. They’ve done a great job for me. I look forward to next season and the next few races this year.” 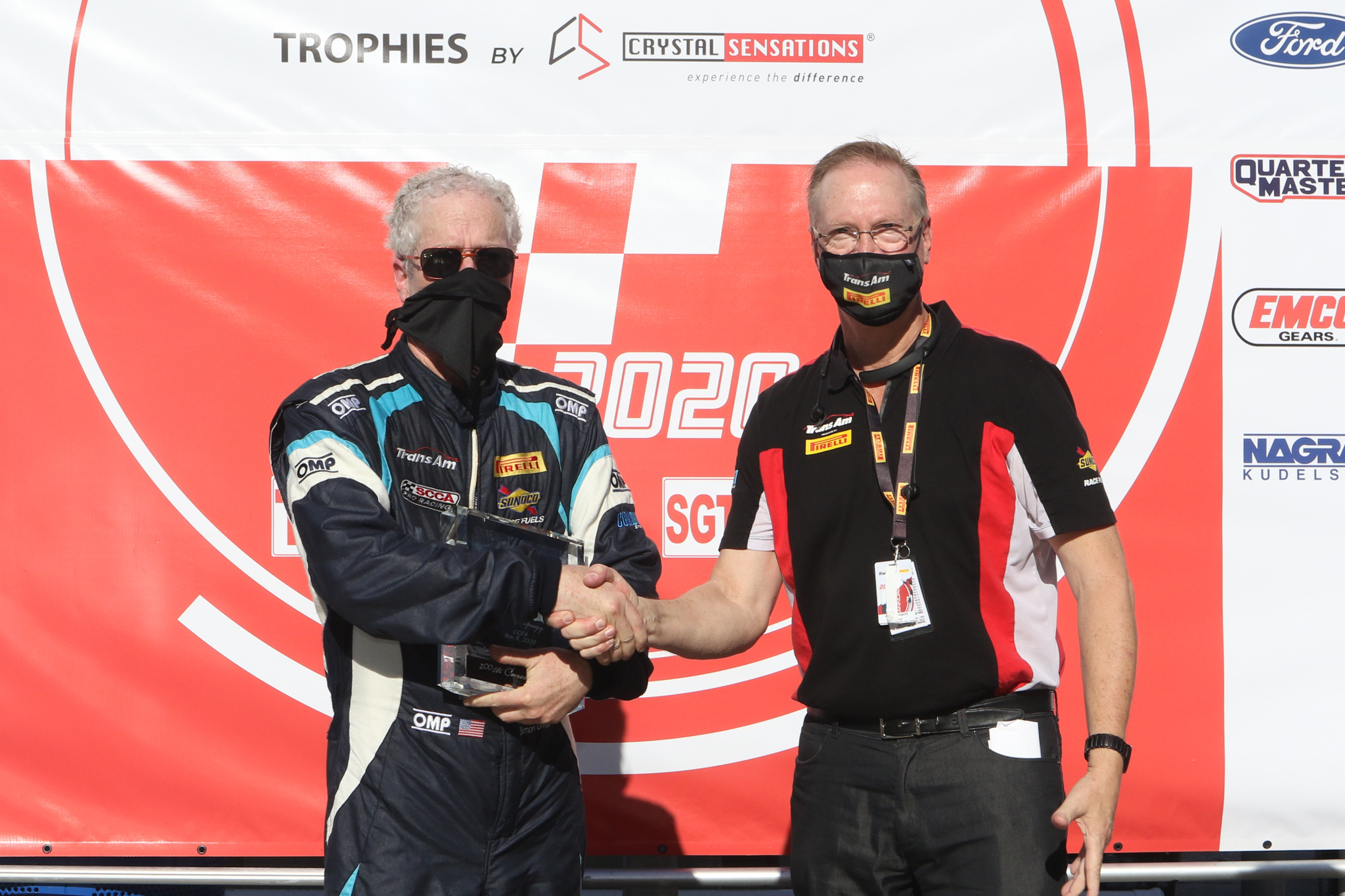 Kerry Hitt was the Masters Class Winner, placing seventh when his No.19 Advanced Composite Products Cadillac CTS-V lost drive only a few yards from the finish line in the caution-free 102-mile race.

In XGT, Jason Daskalos took advantage of problems striking two early-race leaders to win, driving the No. 7 Vintage 423 Audi R8GT3. Trans Am debutants Justin Oakes and Dan Knox took turns in the lead but both dropped out. Oakes, driving the No. 11 G-Speed Corvette, claimed the point at the start, before Knox went by after a tough battle in the No. 80 ACS Manufacturing Mercedes AMG GT3. Oakes dropped out with 13 to go, with Oakes pulling off in Turn 19 six laps later.

“It’s great to be back,” said Daskalos, who won at Road America in 2017 and 2018 in a Dodge Viper. “This is a new car for us, and we’re still working on setting it up. But I’m glad to be here, and happy with the result. Running with the different classes was challenging, but it was good, fun, clean racing.”

After suffering a major wreck in the last round at Virginia, Lou Gigliotti bounced back for his first SGT victory of the season in the No. 28 G2 Performance Corvette. 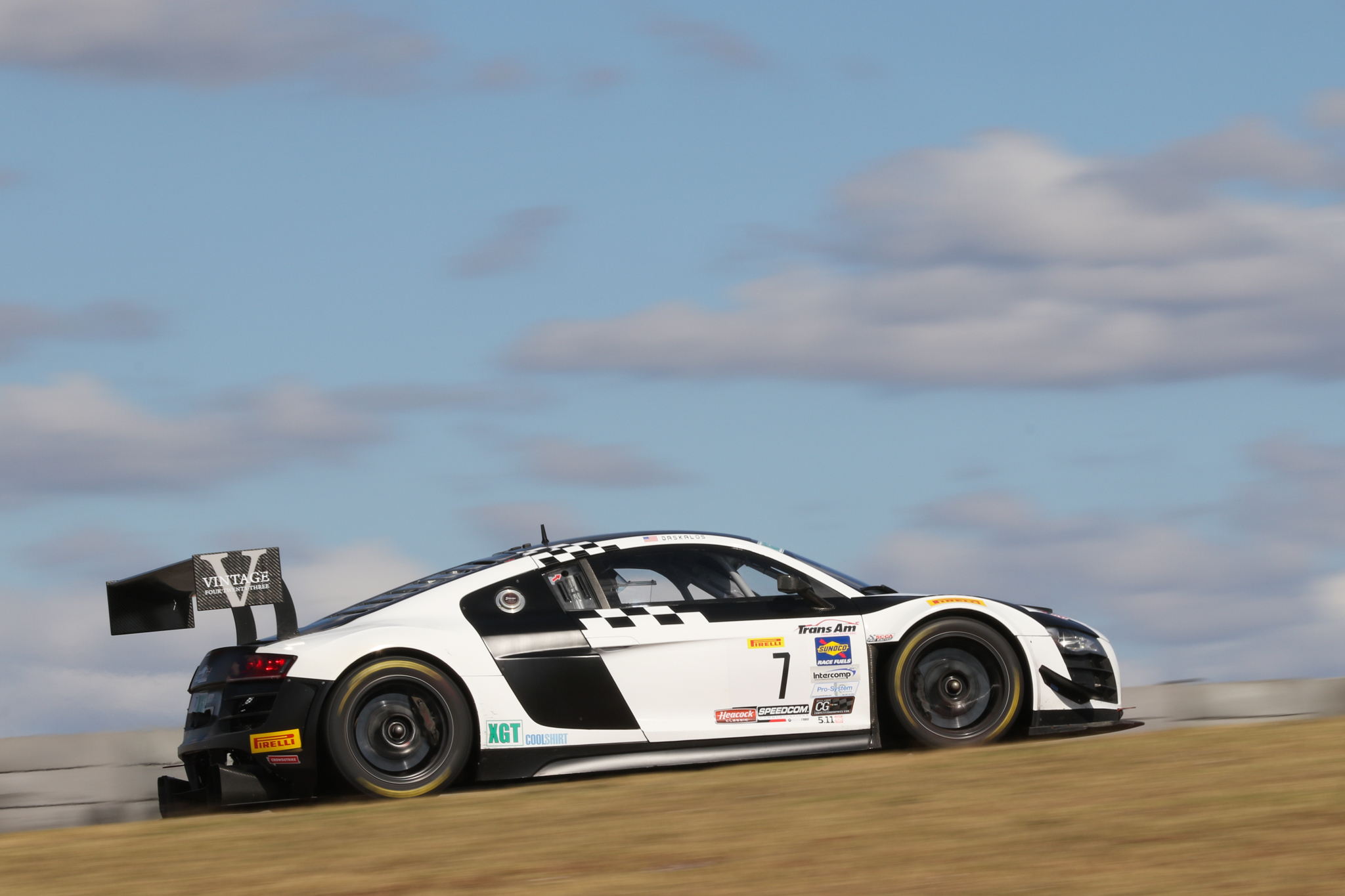 "What a difference from last week to now,” said Gigliotti. “We touched, we bumped, we knocked something loose in the car, then we just took the lead, it felt like we went from eight cylinders to 10. It was a great race, really glad to be here. This is actually my third Trans Am win. I won Long Beach and Lime Rock a million years ago, so I am glad to be back on top."

Lee Saunders entered the weekend with a 36-point advantage in the SGT class, but retired his four-race winning No. 84 Landsearch LLC Dodge Viper on the opening lap.
That opened the door for Adrian Wlostowski, who won his first career pole in the No. 96 F.A.S.T Auto Racing Ford Mustang and led the opening laps before losing power. Gigliotti went by on the sixth circuit, and led the rest of the way for his third career triumph – and first in 19 years.

“After the sixth lap, we ran the rest of the race on six cylinders,” Wlostowski said. “I had to relearn the track. It was frustrating, but we still got a second-place finish today.” 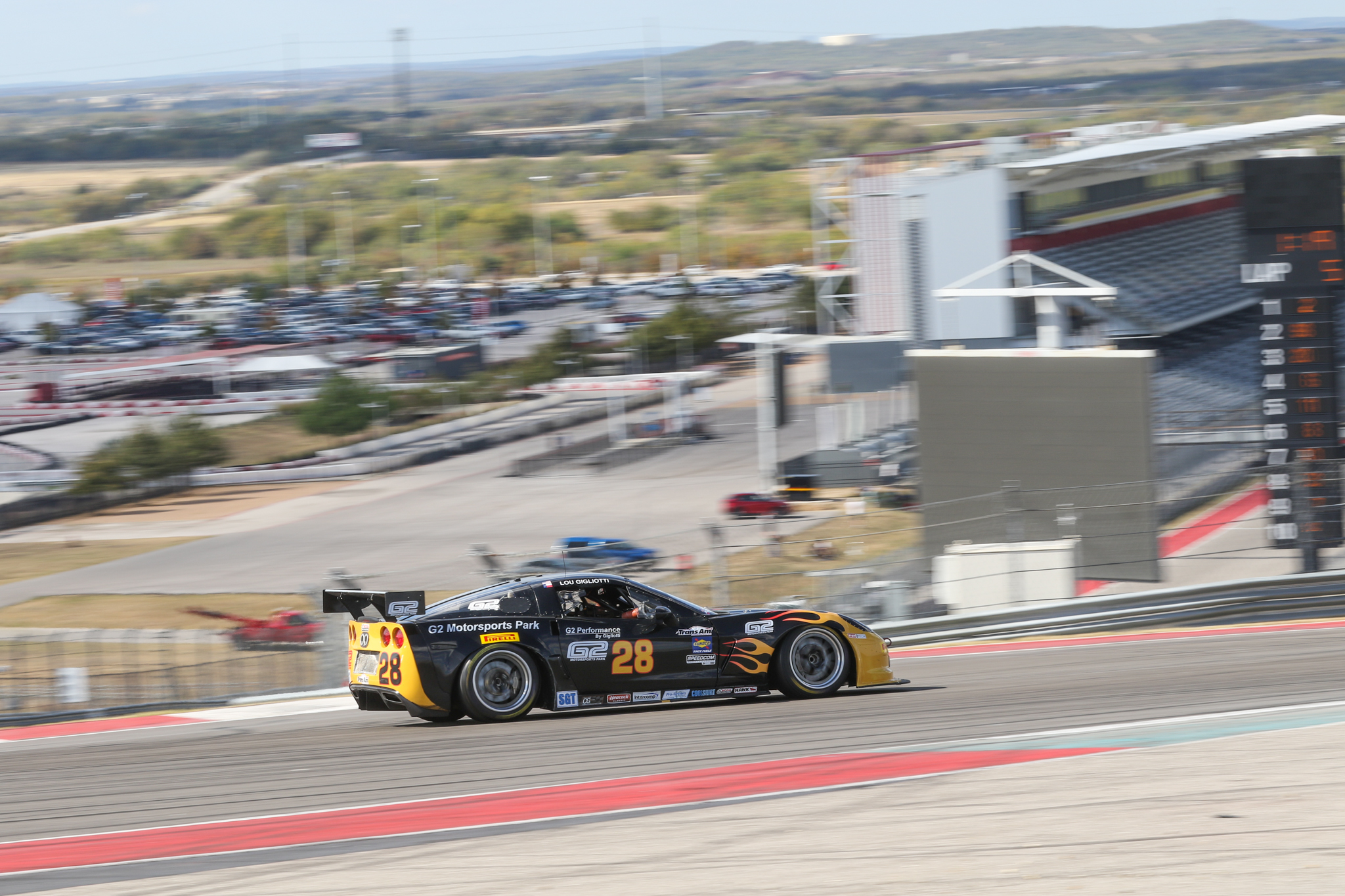 Natalie Decker took fourth overall and won the SGT West race in the No. 04 N29 Technologies LLC Audi R8 GT4. It was her first career victory after scoring a pair of second-place finishes on the West Coast driving for Tony Ave earlier this season.

“Today was so much fun, I have so many friends and family members here supporting me,” Decker said. “NASCAR is coming here next year and I was glad to get some experience before returning here in 2021."

In GT, Billy Griffin took his second victory of the season in the No. 14 Griffin Auto Care/Sheehan’s Towing Ford Mustang. The Floridian has two victories and two seconds in four races. Sean Young finished second in the No. 74 Corsair Racing Aston Martin Vantage GT4, winning GT West honors. Joe Bogetich was third in the No. 65 Westover/Alberio Energy Camaro.

“It was awesome,” Griffin said. “We had a great car. We knew we had a good shot at it today. The car ran really, really well. Cameron Lawrence has been helping me all weekend, and we got the car set up the way I like it. It was flying!”

Two weekends – and four races – remain on the 2020 schedule. 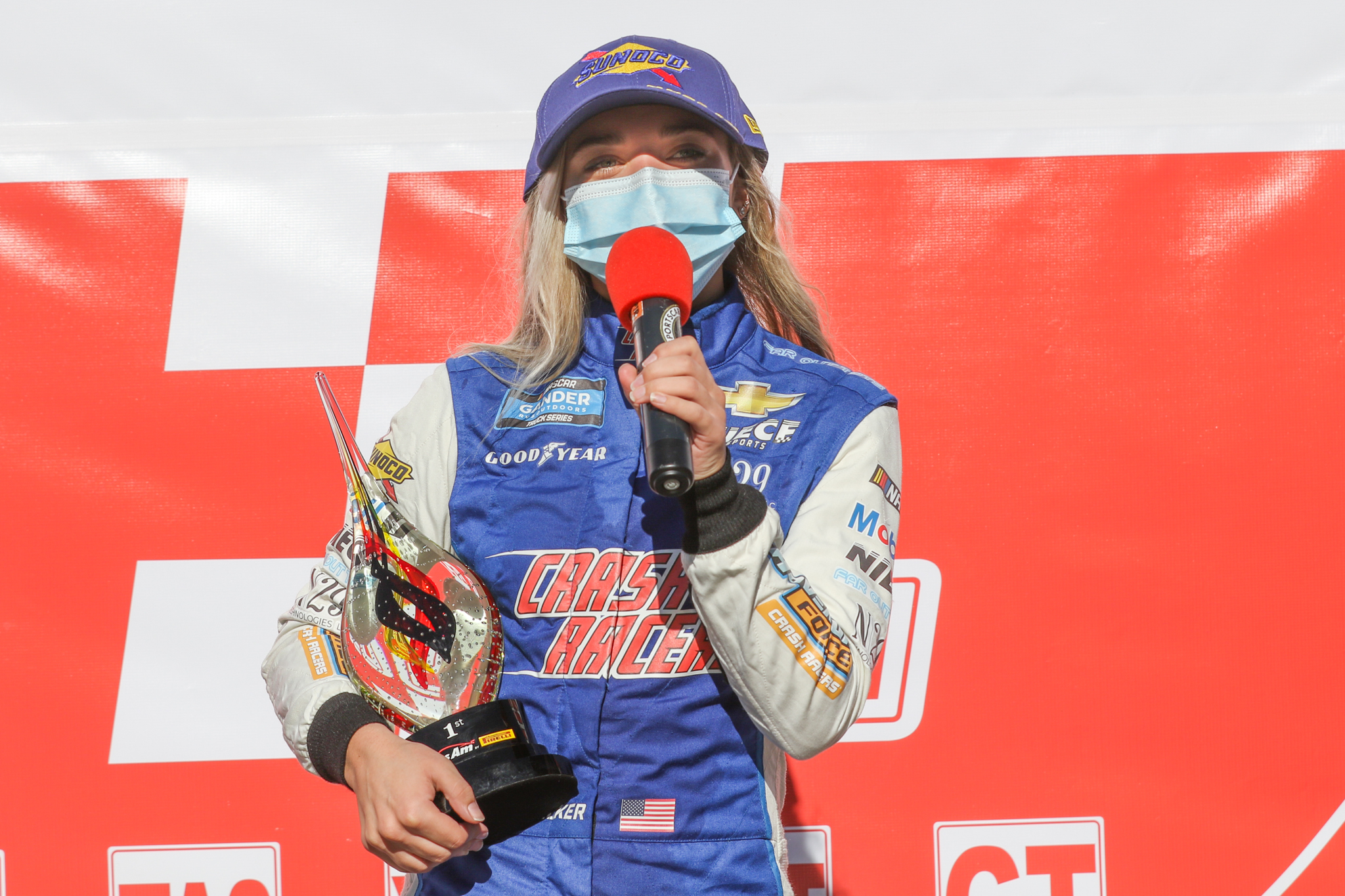 The National Series visits Michelin Raceway Road Atlanta for a pair of races on Saturday, Nov. 21, followed by a combined event the following day. The campaign ends on Dec. 5-6 at WeatherTech Raceway Laguna Seca, featuring a pair of Saturday races and a combined event on Sunday for the National series, which will be joined by the West series in one of the races.

Race Replays from Sunday’s feature at CoTA are available on the Trans Am by Pirelli Racing App: https://nagrasports.app.link/lIQjdAuxq7