SONOMA, CALIFORNIA (10 OCTOBER 2020) – A damp Sonoma Raceway created tricky conditions for the Trans Am Series presented by Pirelli West Coast Championship on Saturday during the first round of the double feature weekend. With a tire strategy that played to his favor, Thomas Merrill mastered the wet, slippery Sonoma circuit on Pirelli rains to claim the overall race win in the No. 62 Nelson Motorsports Race Cars 4 Rent. (Full Results)


The 75-mile race started out dry but after two laps, rain started to fall, producing a very slick Sonoma circuit for the Trans Am drivers. Racing quickly switched from green to full course caution, and some drivers elected to pit, switching from Pirelli slicks to rain tires while under yellow. 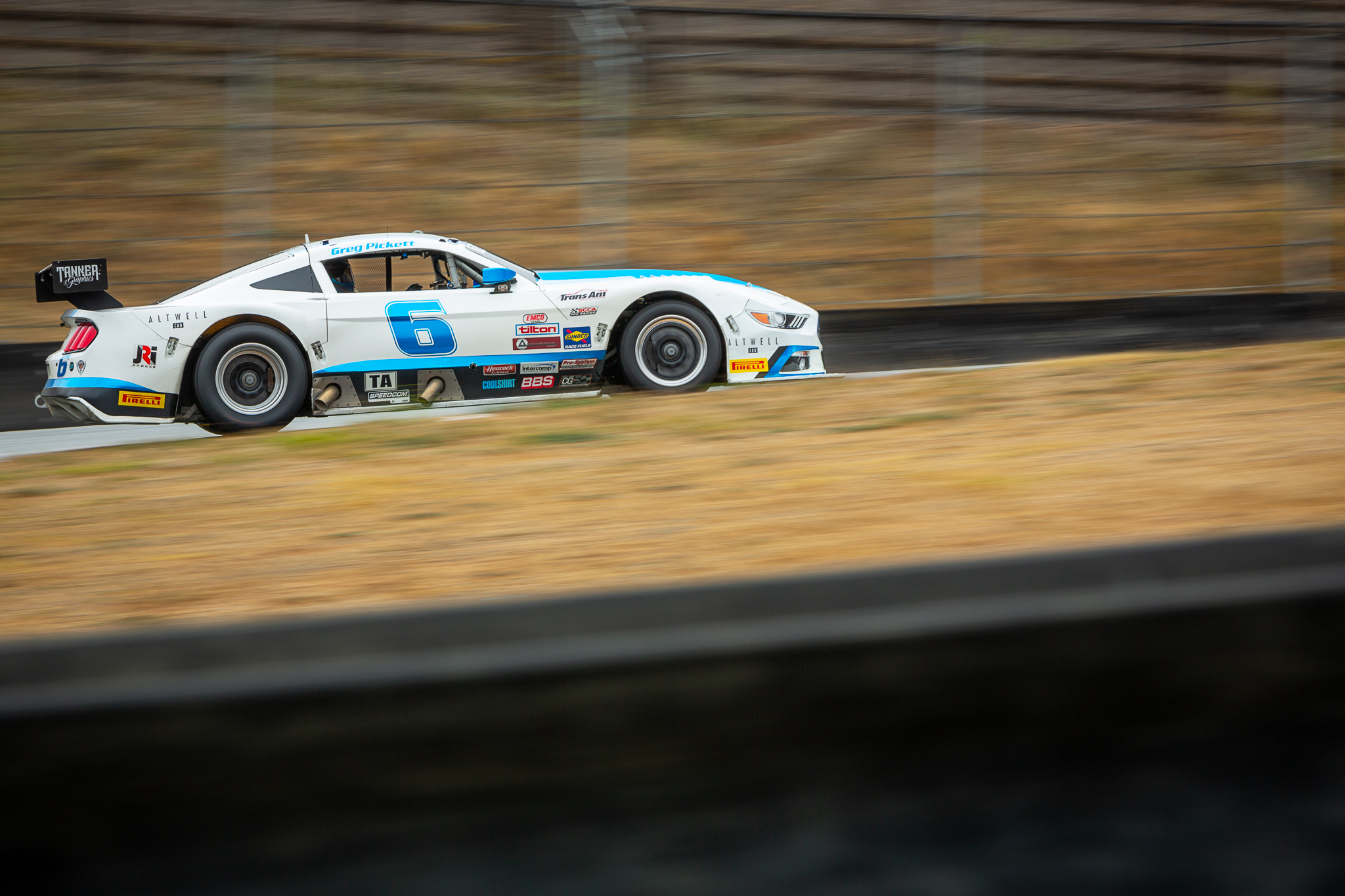 TA2® powered by AEM pole-sitter  Merrill was one of the first competitors to make the change, and the strategy paid off as the California native stayed on the lead lap, charging from the back of the field to take the overall lead on Lap 15.

Merrill continued to set the pace for the remainder of the race, leading the race at one point by more than 15-seconds ahead of second-place finisher Greg Pickett.

“The key to our success today was the Nelson Motorsports team doing that tire change as fast as they did,” said Merrill. “We went back and forth during the caution on what the right call was because it was fifty-fifty and we decided let’s go ahead and do it, and they jumped on it. That kept us on the lead lap and from there it was about to getting into a rhythm, keeping heat in the tires and staying on the black stuff. That car was really good. Full credit from the team for giving me a fast race car.”

Pickett started on point for the opening race, earning the Trans Am class pole-position start after breaking the track qualifying record on Friday. With Michelle Nagai sharing the front row, Pickett took the green, circled around the track and made a pit stop for rain tires before the track switched to yellow, the first car to make the change.

The tire tactic shuffled Pickett back to seventh overall, but he remained on the lead lap. During the yellow, the rainfall worsened which was an advantage for the Trans Am No. 6 Pickett Racing Ford Mustang. On the restart, Pickett, on rains, easily cut through the field and reclaimed the lead on Lap 9. 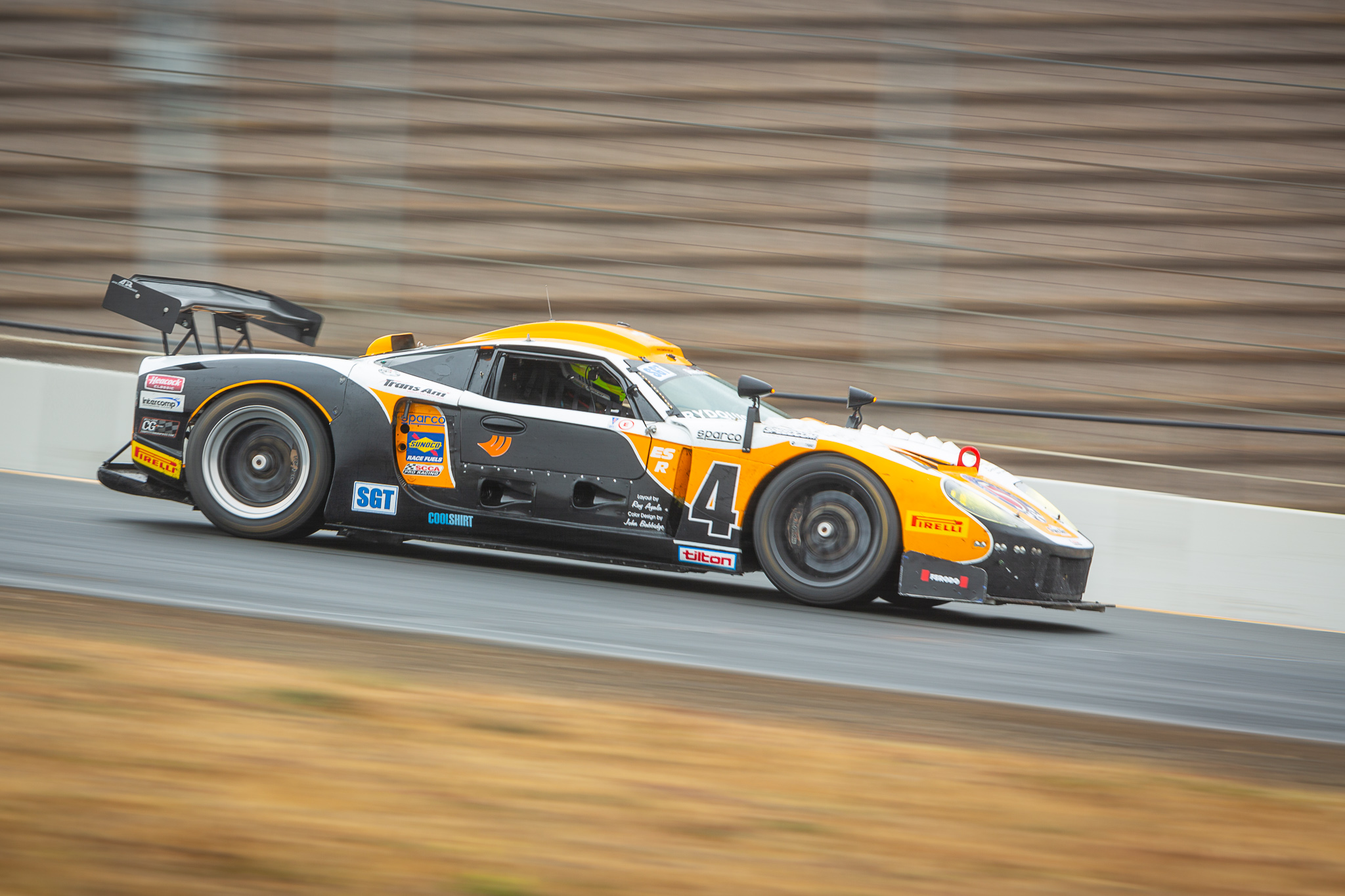 While he was prepared for the rain, Pickett did not anticipate Merrill’s skill, decision making and performance in the wet.

The two Mustangs went to battle, and Merrill caught Pickett on the final turn, squeezing to Pickett’s inside to take the lead on Lap 15 as Merrill went on to take a victory by just 1.690-seconds.

While he’s unaccustomed to not being the first driver to cross the stripe this season, Pickett still earned the Trans Am class win, continuing his perfect season.

“We didn’t anticipate to race in the wet today we thought it was going to stay dry, but we were glad to do so if that meant that our friends in California got the rain they desperately needed; sometimes, things are just bigger than us and what we are doing,” said Pickett, who is a California native himself. “Thomas Merrill is the real deal. I tried to chase him down, and needed another lap, we might have had a race. He did a great job and we are looking forward to tomorrow.”

The only winner to not pit for tires was Carl Rydquist. Communicating with his team, the endurance racer turned Trans Am driver Rydquist decided against changing from slicks to rains as he felt  that his No. 4 MyRaceShop.com/Tel-Tac/Mendeola Factory Five Racing GTM was made to perform in slick conditions. The team’s judgement sent Rydquist to the front of the field, taking the checkered third overall and claiming the SuperGT class win.

“Talking to my crew through the rain brought a sense of comfort like how we talk to each other during an endurance race,” explained SGT points leader Rydquist. “The rain was a surprise, and the team had a great setup on the car. The car is built for rain-type racing and we were back into familiar territory.” 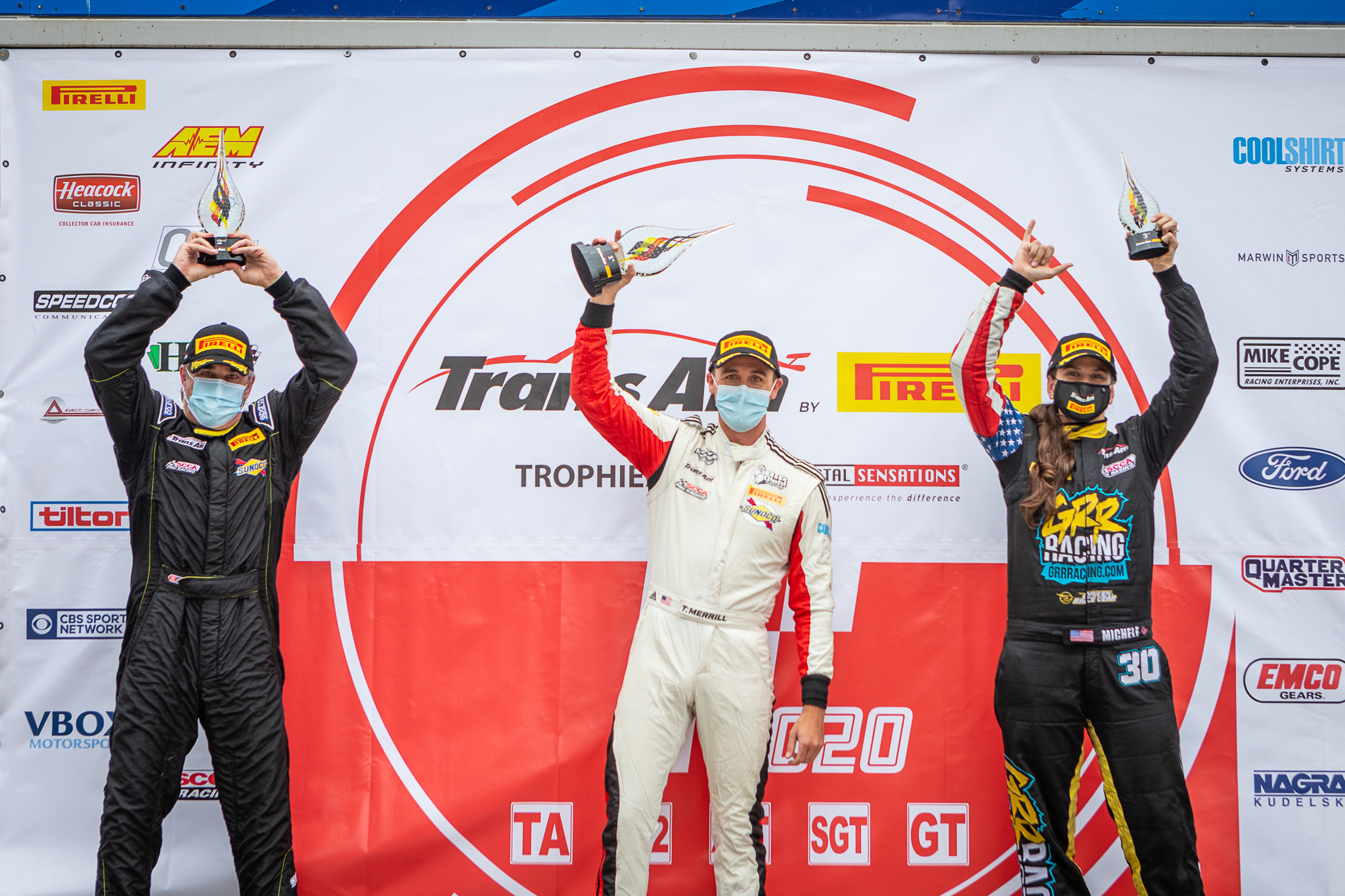 As a Washington native, Jim Gallaugher showed his skills in the rain, wheeling his best race of the season. Finishing second in TA2®, Gallaugher secured his first podium finish of the year in the No. 34 MadisonDevelopmentGroup/MCR Ford Mustang.

“The track didn’t look terribly wet but it was super slick,” Gallaugher said. “It was fun. We are from Seattle, we know what rain is like, and the team did a great job with the tire change and the setup today.”

Michele Abbate made Trans Am history on Saturday as the first female driver in TA2® to ever earn a podium finish.

Abbate topped her best placement, running on slicks in the No. 30 Grr/Scosche/PRYDE/Scrubblade Chevrolet Camaro, taking a career-high third-place finish after having finished fourth at Thunderhill earlier in the season.

“This is my first race to be on the podium in Trans Am, and I am so proud to be her and to be the first female to earn this accomplishment,” said a gleaming Abbate. “I wouldn’t be here without my husband, he’s my crew chief, he’s my tow truck driver, he’s my sandwich maker, my everything, thank you Anthony, we did it.” 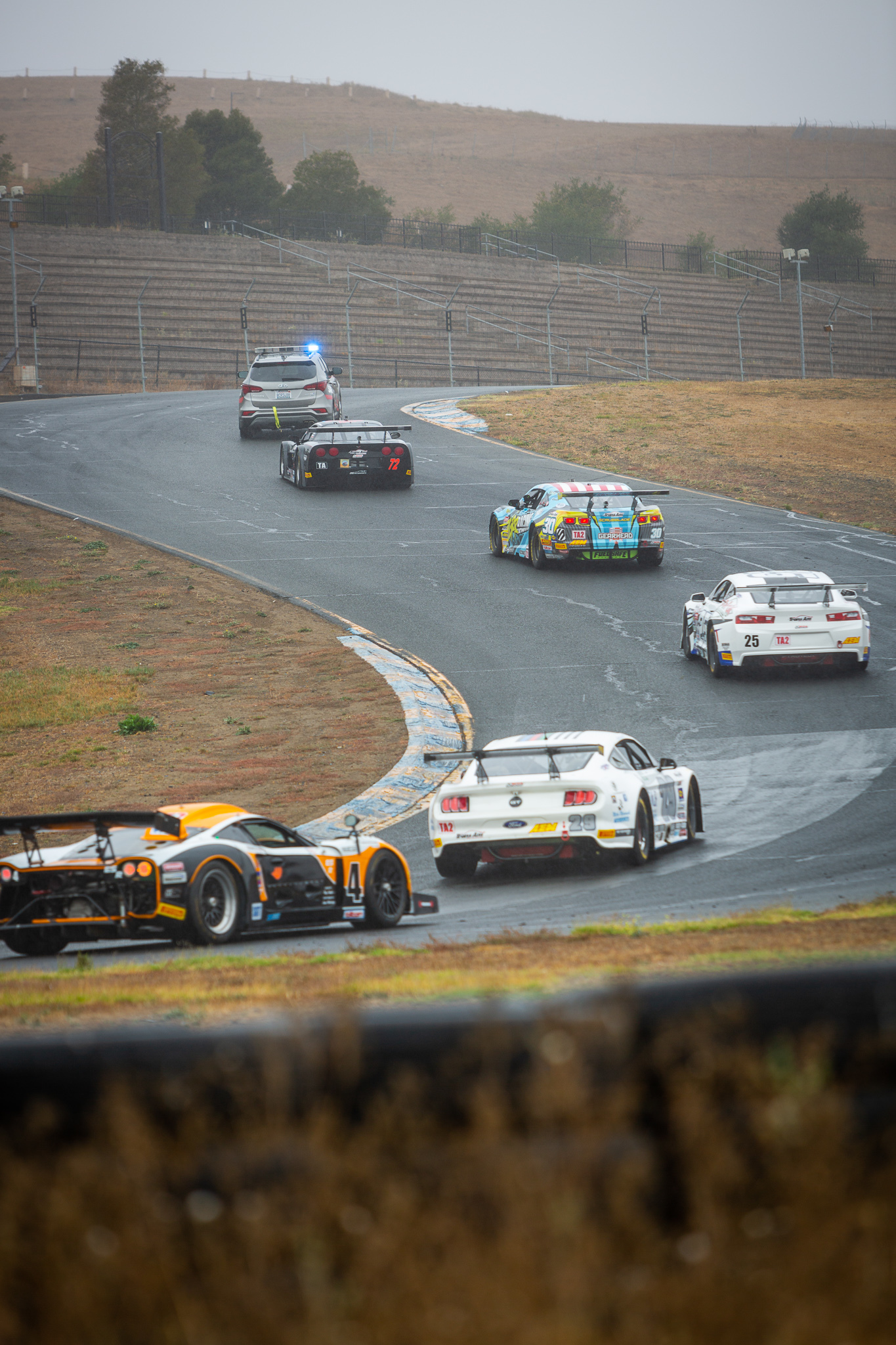 A novice in the rain, John Schweitzer (No. 00 SuperiorBuilders/KidderMatthews Chevrolet Holden) finished second in SGT.

The Trans Am Series presented by Pirelli drivers will wrap up their Sonoma doubleheader on Sunday with another 75-mile feature, starting at 12:45 p.m. Pacific.

The field will be gridded by fastest laps by class from Saturday’s race. Merrill finished with the overall fastest time with a 1:43.062-seconds. He will start pole-position for TA2, with Pickett and Rydquist taking point in their respective classes.

Fans can follow live timing and scoring at: www.GoTransAm.com/livetiming