ECC Motorsports had a successful return to the Trans Am Series presented by Pirelli in 2019, fielding A.J. Henriksen in TA2® powered by AEM and Adam Andretti for a partial season campaign in the Trans Am class.

With its focus on the Northern Cup, ECC Motorsports claimed titles in both the TA and TA2® classes. After Boris Said won in the Pancho Weaver-built Dodge Challenger, ECC Motorsports acquired the car for Andretti to finish the final two races of the season. Under pressure from a stout field in extreme heat, Andretti went on to win at Circuit of The Americas, the first victory of the season for ECC Motorsports. The year culminated for the team at the Performance Racing Industry Show in Indianapolis earlier this month, displaying two cars at the three-day convention.

Find out more about the behind-the-scenes action throughout the season, if the Boris Said’s winning Dodge Challenger will return to the grid in 2020 and what the team's plans are for next year as we talk to ECC Motorsports’ drivers Adam Andretti and A.J. Henriksen in this edition of Trans Am Corner. 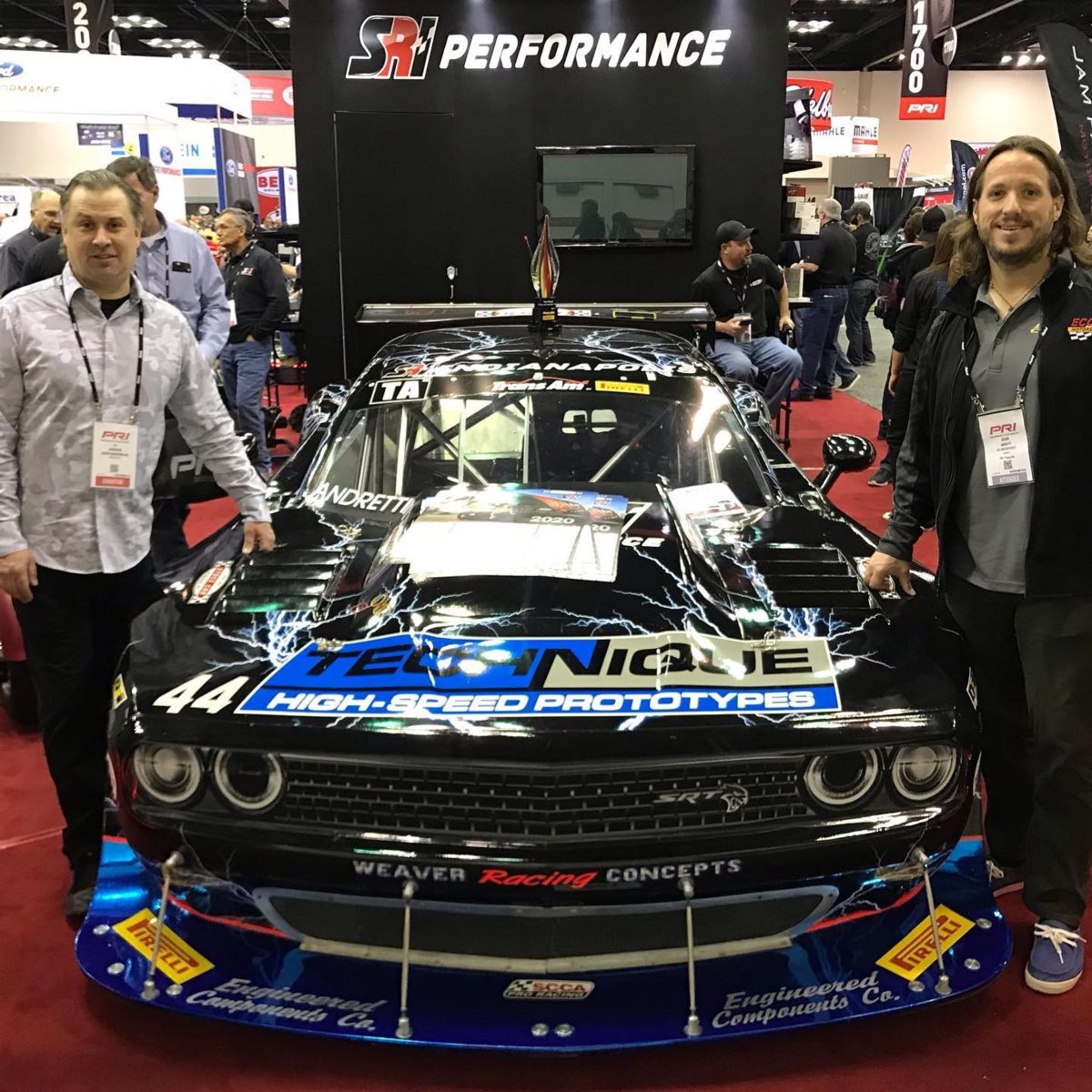 TA- ECC Motorsports had a successful season, winning both the Trans Am and TA2® Northern Cup Championships. How has the introduction of the Cup championships helped you as a team?

Adam Andretti- It certainly gave us a huge burst of energy through our team. It was only supposed to be an Indy program at first and after our performance at Indy it became clear that we could give it a solid run at the Northern Cup Championship. The conversation Monday morning after Indy with AJ went something like…

AJ said, ”Hey so I feel we can double header this Northern Cup Championship you in TA and myself in TA2”

It was so gratifying to be able to pull it off as it is so much easier said than done obviously.

TA- In just two TA2®, Detroit Grand Prix Muscle Car Challenge and Road America, A.J. you made up 27 total positions. What was it like to make all those incredible passes one by one?

Adam, what was the feeling in the pits from the team watching A.J. race at Detroit and Road America?

A.J. Henriksen- It was so fun. Especially starting in last at Road America, avoiding all the first lap incidents to end up in 5th on the second lap.

Adam Andretti- For us in the pits it was a nail biter. Detroit is so technical and there is no room for error there. As for Road America it was incredible watching A.J. avoid all the chaos in turn one. He patiently made his way through the field at Road America as well.

TA- What's been the most memorable moment for ECC in Trans Am?

Adam Andretti- There have honestly been so many memorable moments for us as a team in the years we have worked together. A few that really stand out to me are AJ and I sharing the podium at New Jersey in my rookie year (pictured below). Every win especially the two at CoTA. I personally am very proud of the fact that we are the only Team and Driver combo in Trans Am to have won in every make (Dodge, Chevrolet and Ford) in TA2® and the only combo to have won TA2 and TA at CoTA. 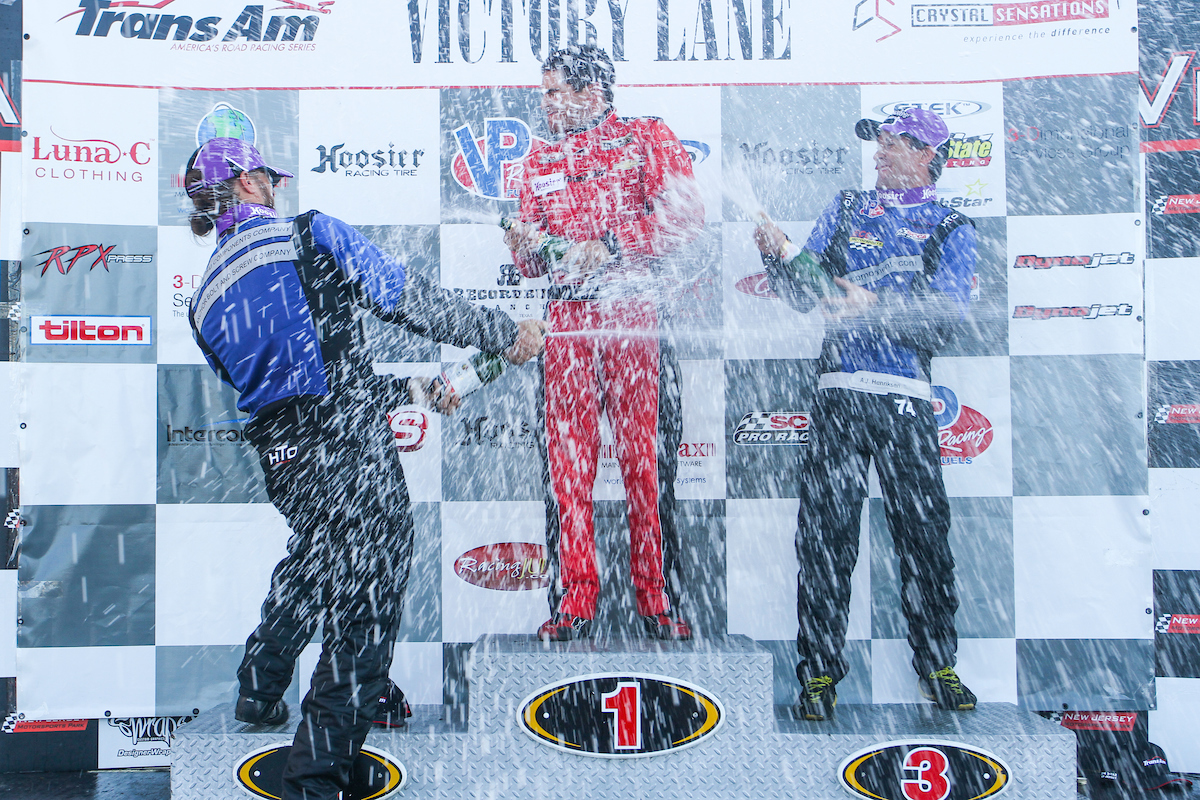 TA- Adam, what did it feel like when you won at Circuit of The Americas?

Adam Andretti- I felt instant gratification! To start off our partnership with Pancho Weaver with such success is a bit of a Hollywood script to us honestly. Didn’t seem real in some ways to come out of the box so fast with that car without ever really tuning on it throughout the weekend. Our team executed perfectly as well. Every single session that weekend we ran every single lap without issue which is a huge testament to the build quality of Weaver Racing Concepts and prep of ECC Motorsports. It certainly showed the racing world how dangerous this combination is going to be in the future. 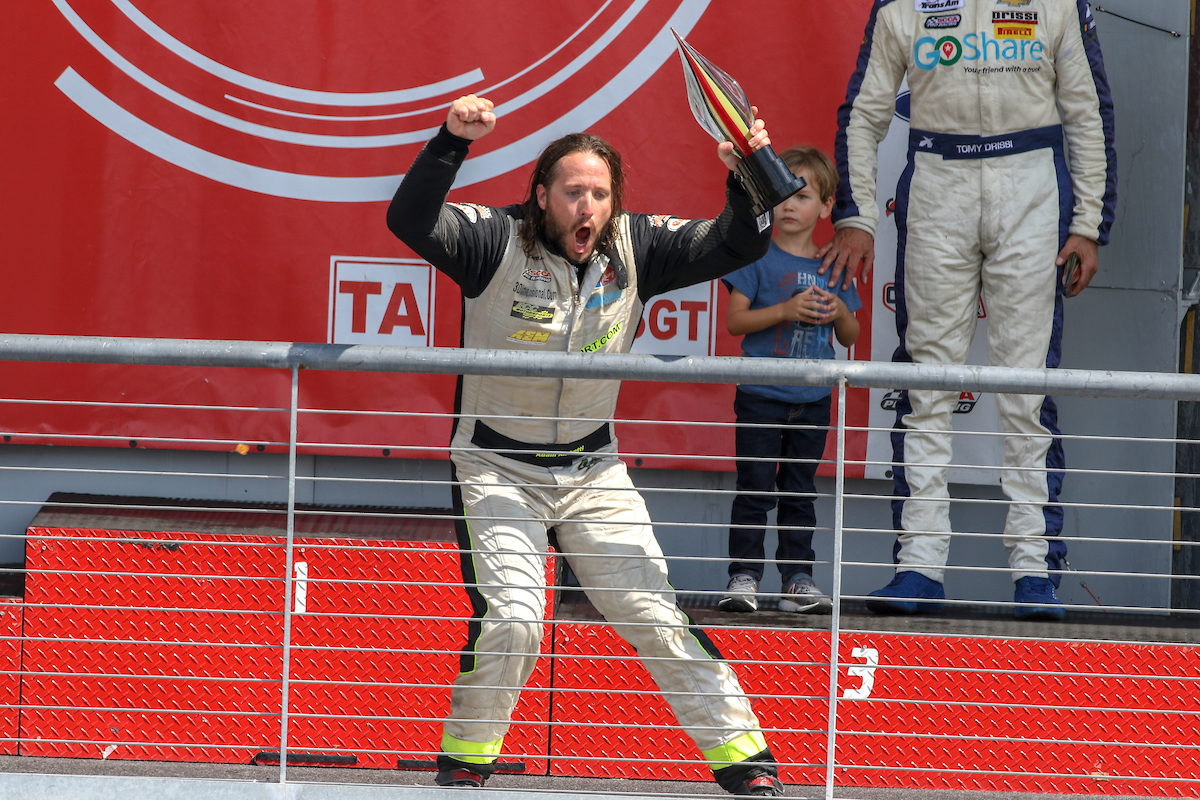 TA- The Pancho Weaver built Trans Am car won twice, once with Boris Said and once with you (Adam Andretti), in a partial season. Will that car return to the grid under ECC Motorsports management next season?

Adam Andretti- The Trans Am Pancho Weaver car will certainly be on grid under the ECC Motorsports banner in some capacity in 2020.

TA- What are ECC Motorsports' plans for the 2020 season?

Adam Andretti- We are working very hard to build the partnerships necessary to come out of the gate strong for 2020. Stay tuned for announcements this off season for those said partnerships and eventual schedule.