Ave and Matos once again lead TA and TA2 in practice 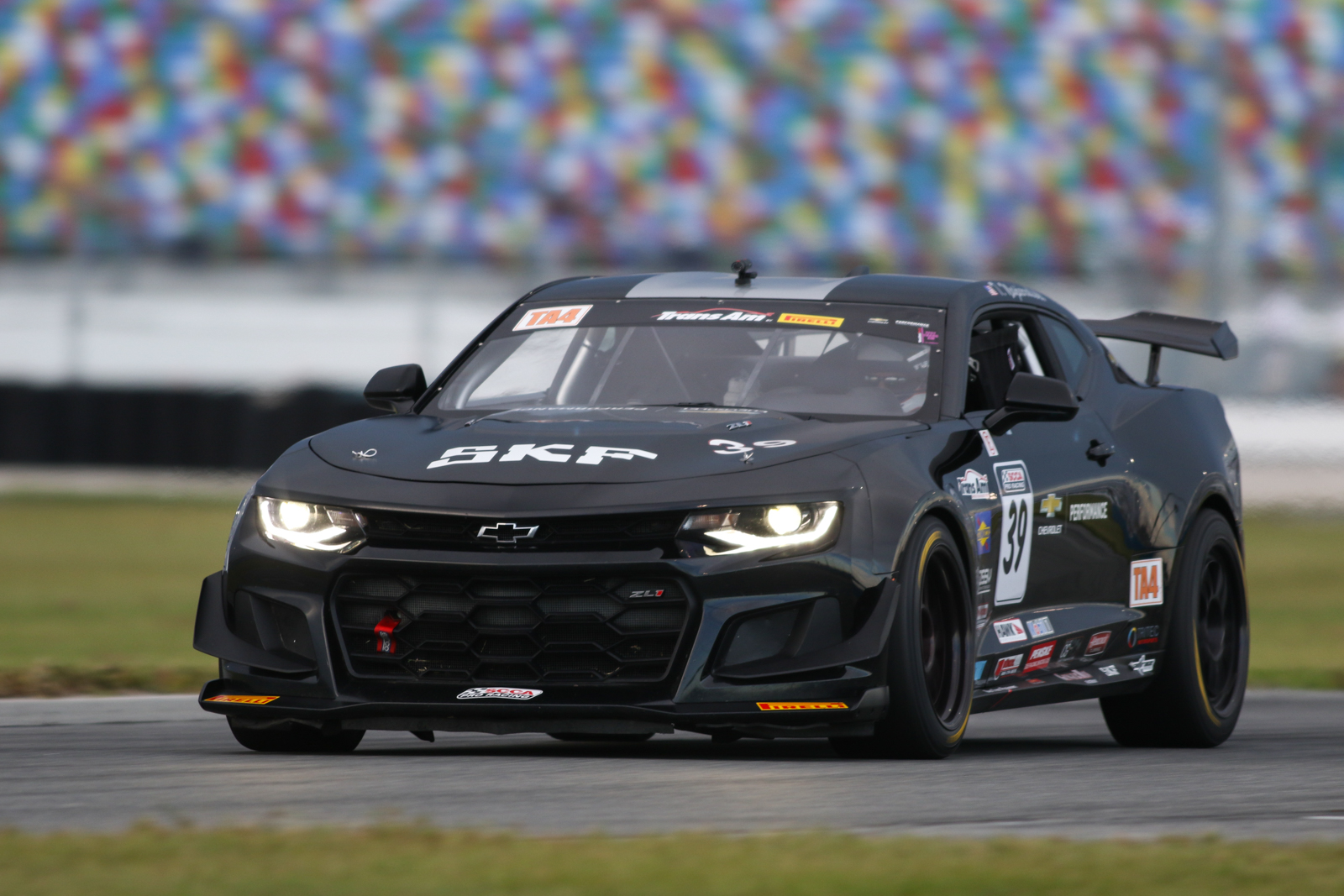 DAYTONA BEACH, Fla. [November 8, 2018] — The Trans Am Series presented by Pirelli closed out the first official day of the 2019 Trans Am finale at Daytona International Speedway with a flurry of sessions: a TA, TA3 and TA4 practice, a TA2 practice and a TA3, TA4 qualifying session.

Qualifying action for the TA3 class saw Jason Daskalos, in the No. 27 Vintage Four Twenty-Twenty-Three Dodge Viper, emerge with a new qualifying track record 1:51.995 lap around the Speedway’s sports car course for his third TA3 pole of the season in as many appearances.

Daskalos' time was quick enough to beat out four-time Daytona pole sitter, 2015 TA3 champ and fellow Viper driver Lee Saunders.  In fact, Saturday’s race will be the first at Daytona since 2014 that Saunders has not been on the TA3 pole; but still, he was not far behind with a time of 1:52.389 in his Landsearch LLC Dodge Viper, seeking the all Viper TA3 front row for Saturday’s 29-lap, 103.24 mile contest.

While the event marks Daskalos’ first Trans Am appearance at Daytona, he does have experience around the course with two Rolex 24 at Daytona starts.  Come Saturday Daskalos will be tasked with navigating the 48-car, multi-class field while fending off Saunders and defining TA3 champion Mark Boden.

“It is going to be tough,” said Daskalos. “With this big of a field and another Viper, this is definitely a Viper track; it’s high speed and it’ll be a good battle between the two of us.  Mark Boden, in the Porsche, is definitely fast as well. The Viper doesn’t like the infield as much, but it definitely likes the banking; so we’ll see.”

Mark Boden, in the No. 46 Fall-Line Motorsports Porsche 991 GT3, will start third after a 1:53.291 qualifying effort as he looks to secure yet another title in the production class, now only eight points behind current leader Alline Cipriani.

Boden’s Fall-Line teammate Tom Herb, also seeking to shore up a top three championship finish in the TA3 class, was fourth in the session with a time of 1:55.323 beating Dave Ricci, in the No. 71 Florida Roadway Signs Chevrolet Camaro, who completed the TA3 top five with a time of 1:57.706.

2017 TA4 Daytona victor Todd Napieralski, in the No. 39 Chevrolet Performance/ SKF/ BSP Chevrolet Camaro, would set pole for the TA4 class, the fifth of his Trans Am career.  Napieralski’s time of 1:58.159 beat out Steven Davison’s mark of 2:00.842 from behind the wheel of the No. 22 DaVinci Plastic Surgery/ Aston Washington Aston Martin GT4.  Napieralski will hope for a similar result on Saturday, with the Trans Am veteran well versed in the multi-multi-class format, even with the addition of the TA2 class.

“We were able to pull out the win here last year, and Daytona is one of my favorite tracks,” said Napieralski.  “It’ll be a little different with us all running together, especially for us being the slower class.  There was quite a bit of traffic out there today,  and we haven’t had the TA2 classes running with us for awhile.  But I do remember those races when it was all of us, and I think it’ll be fun.”

The event marks only Napieralski’s fourth Trans Am appearance of the season, the combined allure of the Trans Am finale and Daytona  being too much to stay away.

“Daytona is such a classic track,” said Napieralski.  “Quite honestly, it’s also about the people.  It’s our end of year celebration and everyone’s here; we all race for trophies, but it’s also about the friendships we have here in the paddock and being a part of that.” 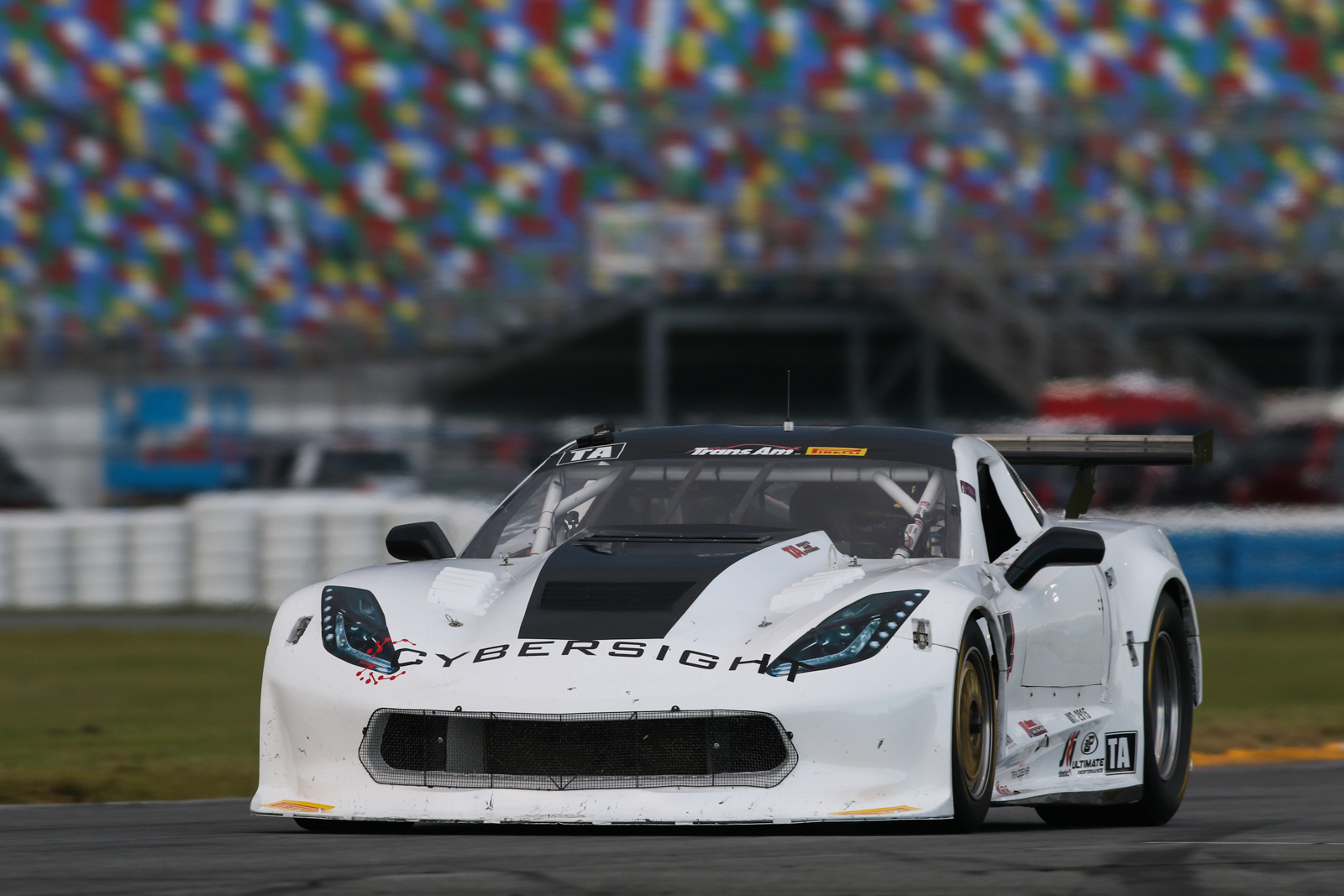 While the TA and TA2 classes will not hold their qualifying sessions until tomorrow, they still took to the track for a second practice with Tony Ave and Rafa Matos once more leading the way for their respective classes.

For the second consecutive TA class practice session Tony Ave, in the No. 4 Cybersight/ Ransom-Stopper Chevrolet Corvette, set the pace  for the TA class, turning a 1:43.649 lap around the 3.56-mile sports car course.  The lap also stands the quickest of the day, besting his time of 1:44.531 set in the morning’s session.

Between the day’s practice sessions and Ave’s historically strong qualifying record, with 32 poles across his 97 previous starts, Ave firmly stands the favorite for tomorrow’s qualifying session.  The 2010 and 2011 TA class champion’s lap time from today’s final practice is also faster than every Trans Am Daytona fast qualifying mark with the exception of Ernie Francis, Jr.’s time of 1:43.211 from 2017 and Ave’s own of 1:43.314 from 2013.

Second quick in the session was recently crowned Rookie of the Year Chris Dyson, in the No. 20 Plaid Enterprises/ CD Racing Ford Mustang, with a time of 1:44.574, vastly improving on his mark of 1:50.477 from the earlier session.

2009 TA champion Tomy Drissi, in the No. 8 The Grinch Chevrolet Camaro, was third quick in the session with a time of 1:45.212, while David Pintaric, in the No. 57 Kryderacing Cadillac CTS-V, and Drissi’s Burtin Racing teammate Lawrence Loshak, in the No. 2 Pennzoil/ ETE/ GoShare Chevrolet Camaro, had times of 1:45.590 and 1:45.864, respectively.

Other members of the TA class turning times in the top ten of the 16-car division were, in order: Shane Lewis, RJ Lopez, Amy Ruman, AJ Henriksen and Ernie Francis, Jr.

Following the mixed TA, TA3 and TA4 practice sessions, the TA2 class would have its own opportunity to tackle the banks of Daytona International Speedway’s sports car course, with 2018 champion Rafa Matos once more leading the way.

Running alongside the TA class in the practice session were the TA3 and TA4 classes, prior to their qualifying session, led by eventual polesitters Jason Daskalos and Todd Napieralski. 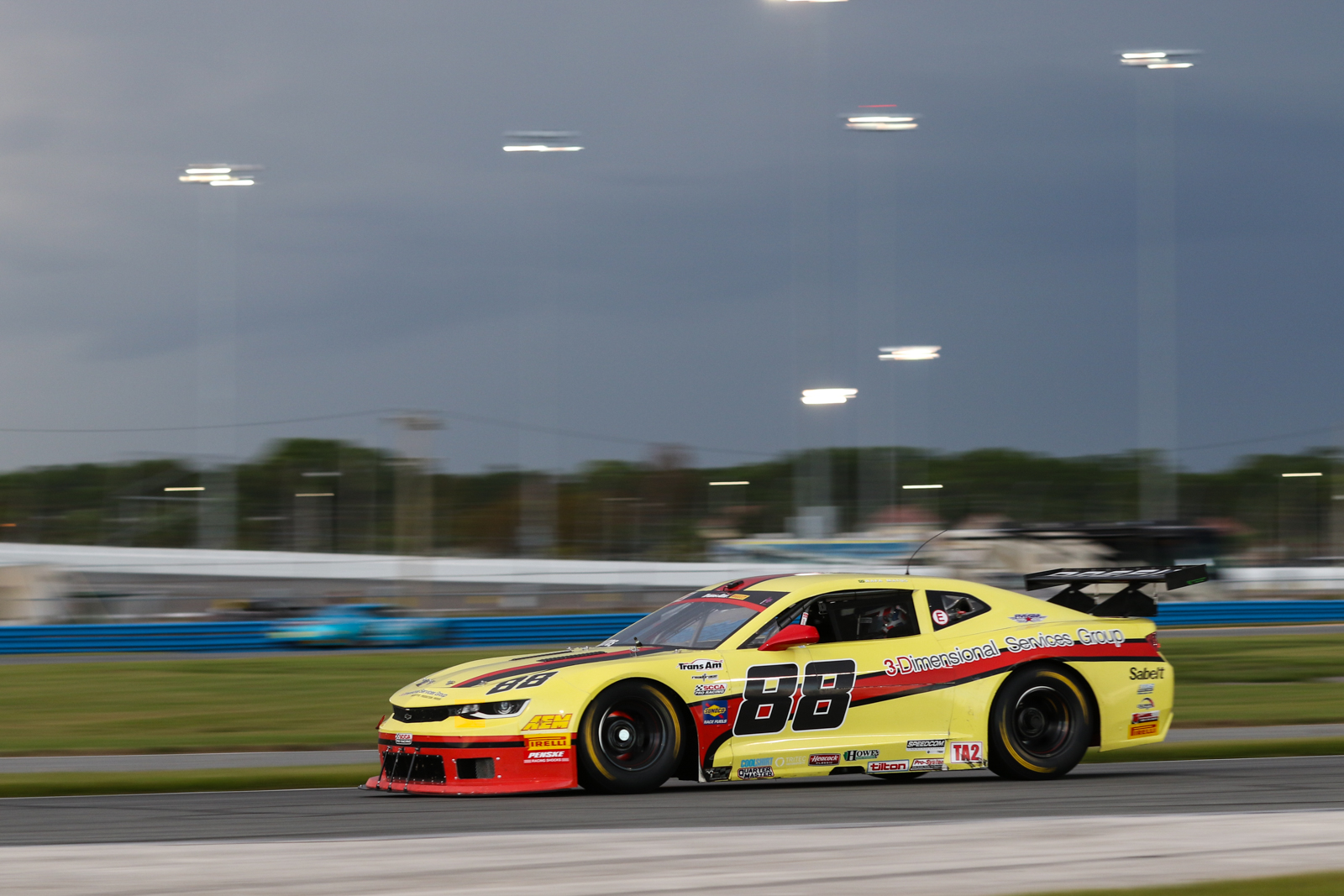 In a standalone TA2 practice session Matos and the No. 88 3-Dimensional Services Chevrolet Camaro would turn a 1:50.221 fast lap to pace the 23-car TA2 field as he eyes a final piece of 2018 silverware and another win in his home state of Florida.

Following Matos in the session was 2017 Daytona victor Tony Buffomante, in the No. 34 Mike Cope Racing Ford Mustang, with a 1:51.060 lap, and Misha Goikhberg, in the No. 25 BC Race Cars Chevrolet Camaro, completing the top three.

The Trans Am Series presented by Pirelli will return to the sports car course at Daytona International Speedway tomorrow for TA and TA2 class qualifying, commencing at 12:30 PM ET and 12:50 PM, respectively.