AUSTIN, Texas. [October 30, 2018] — With only two rounds of competition remaining in the 2018 Trans Am Championship presented by Pirelli, the Series descends on Circuit of The Americas, one of the modern jewels of American motorsport, for its penultimate round.  From one of the tightest TA championship races in recent years and the largest TA2 field of the season, Trans Am is set to commence a two weekend stretch to close out 2018 in thrilling form before the season finale at Daytona International Raceway on November 10th.

To mark the occasion, the Series brings with it a 53-car entry to the Texas state capital of Austin and will hold its customary two races, Sunday’s TA, TA3 and TA4 class Trans Am 100 and Saturday’s TA2 class Muscle Car Challenge, both of which will span 102.81 miles, 30 laps around the 20-turn 3.427-mile circuit.

In the TA class, all eyes will be on the championship battle between defending TA champ and points leader Ernie Francis, Jr., in the No. 98 Frameless Shower Doors Ford Mustang, and challenger Lawrence Loshak, in the No. 2 Pennzoil/ ETE Reman/ Go Share Chevrolet Camaro, with only five points separating the duo.

Fittingly, COTA will have a major role to play in Francis’ and Loshak’s championship fates; as it marked their TA battle last year with Francis outlasting Loshak, making his TA class debut, for the victory.  Now, nearly one year to the day, the two will match up once more with the TA class championship potentially on the line and with a points differential so meager both still control their own destinies.  With no margin for error, every point matters—raising the stakes for even the simplest session this weekend.

Entered alongside Francis and Loshak will be eight other TA class competitors, all capable of impacting the weekend’s outcomes and in many cases former class champions in their own right.

Two-time TA class champion Amy Ruman will mark a career milestone this weekend, her 100th career Trans Am start in the No. 23 McNichols Company Chevrolet Corvette for the family-run Ruman Racing team.  Ruman’s Trans Am debut came in 2005 at Cleveland, where she started 10th and finished seventh, an unassuming beginning to what has become one of the iconic careers of modern Trans Am.

In 2011 at Road Atlanta, Ruman became the first woman to win a Trans Am race  and In 2015 the first woman to capture a North American professional road racing championship, a feat she repeated again in 2016.  Throughout her storied Trans Am career, Ruman has captured 16 victories, 41 podium finishes and five poles—all tallies she will be eager to add to come Sunday as she pursues a position on the year end championship podium.

Like Ruman, both Chris Dyson, in the No. 20 Plaid Enterprises/ CD Racing Ford Mustang, and David Pintaric, in the No. 57 Kryderacing Cadillac CTS-V, are in contention for a top three finish in the overall championship, with Dyson even within striking distance of the championship points lead if disaster were to befall both Francis and Loshak.  Entering COTA, Dyson leads Pintaric by eight points, 198 to 190, with Ruman in pursuit with 187.

Other TA class champions in attendance include Loshak’s Burtin Racing teammate Tomy Drissi, in the No. 8 The Grinch Chevrolet Camaro; Boris Said, in the No. 21 Monster Energy/ WSRI Performance Dodge Challenger; and Simon Gregg, in the No. 59 Derhaag Motorsports Chevrolet Corvette.

Kerry Hitt, in the No. 19 Advanced Composite Products Cadillac CTS-V, and Richard Grant, in the No. 30 Grant Racing Chevrolet Corvette, round out the TA class field. 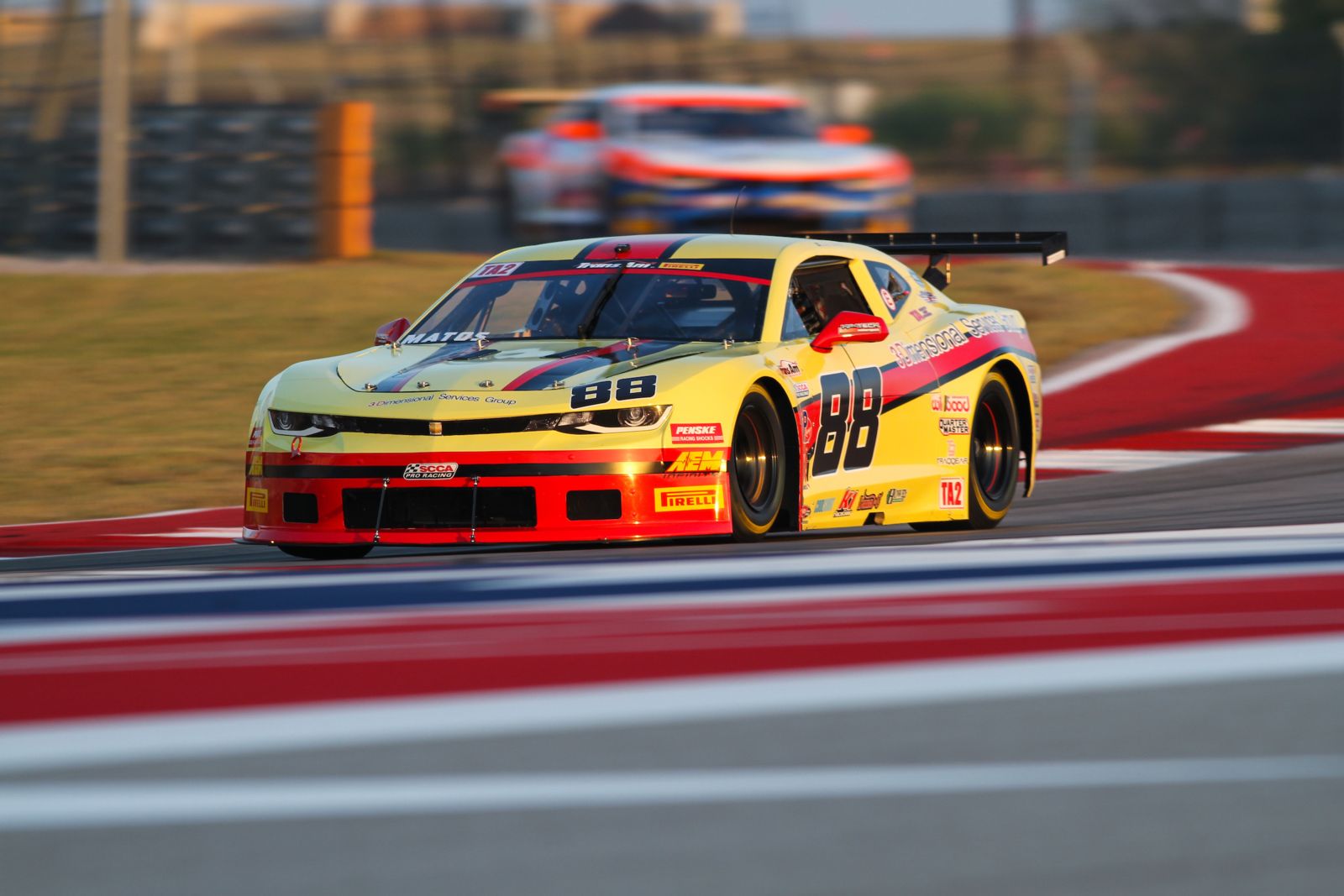 While the TA2 championship is officially in the possession of Rafa Matos, in the No. 88 3-Dimensional Services Group Chevrolet Camaro, and the Coleman Motorsports team, Saturday’s TA2 Muscle Car Challenge will feature a 30-car field— tied for the largest of the year with 2018’s season opener at Sebring.

Matos will continue his campaign, championship in hand, this weekend with the opportunity to add to a trophy case that already includes five victories amongst eight podium finishes.  Racing alongside Matos for Coleman Motorsports will be Doug Peterson, in the No. 87 3-Dimensional Services Chevrolet Camaro.

Adding some international flavor to the contest will be Russell Wright, of Paradise Pointe, Queensland, Australia, throwing his hat in the ring as the first ever Howe and Stevens-Miller Racing international driver exchange competitor.  Wright will be in good company beneath the SMR tent, with Wilson and fellow rookie Brian Swank, in the No. 11 Royal Flush/ Prefix Dodge Challenger, also in attendance.

Another TA2 debutant is Texas’ own Rudy Revak, a veteran of NASCAR competition, ready to take on TA2 from behind the wheel of the No. 26 Mike Cope Racing Ford Mustang, joining Buffomante, Prociuk and Matt Parent, in the No. 14 Mike Cope Ford Mustang, in the MCRE  paddock.

Veteran fans of TA2 competition will have the pleasure of seeing the previous class victors Gar Robinson, in the No. 74 74 Ranch Resort Chevrolet Camaro, and Dillon Machavern, in the No. 59 Red Line Oil/ Manufacturing News/ TRB Chevrolet Camaro, back in action this weekend.  While Robinson, the 2015 and 2017 TA2 champ and native Texan, will be flying his home colors of Robinson Racing, Machavern enters as a familiar face in a new place, racing with TRB and, for the first time in Trans Am, behind the wheel of a Chevrolet Camaro.

The three-car team of Napoleon Motorsports, based in Magnolia, Texas, will also be in contention with Justin Napoleon, Joe Napoleon and Shane Lewis piloting the No. 90, 91 and 92 Turn Key/ Surphis Chevrolet Camaros.  Both Napoleon’s call Magnolia home, while Lewis, last year’s TA2 race winner, resides in Jupiter, Florida.

Running alongside the primary championship in TA2 will be members of the Trans Am West Coast Championship, with David Smith, in the No. 15 Shockwave Suspension Seats Chevrolet Camaro, Brad McAllister, in the No. 24 Wired Motorsports Ford Mustang, and Michael Mihld, in the No. 55 Track Fanatic Chevrolet Camaro, all participating.   Mihld and Smith are currently in a deadlock for second in the TA2 West championship with only a single point separating the two contestants; Mihld’s 96 to Smith’s 95. 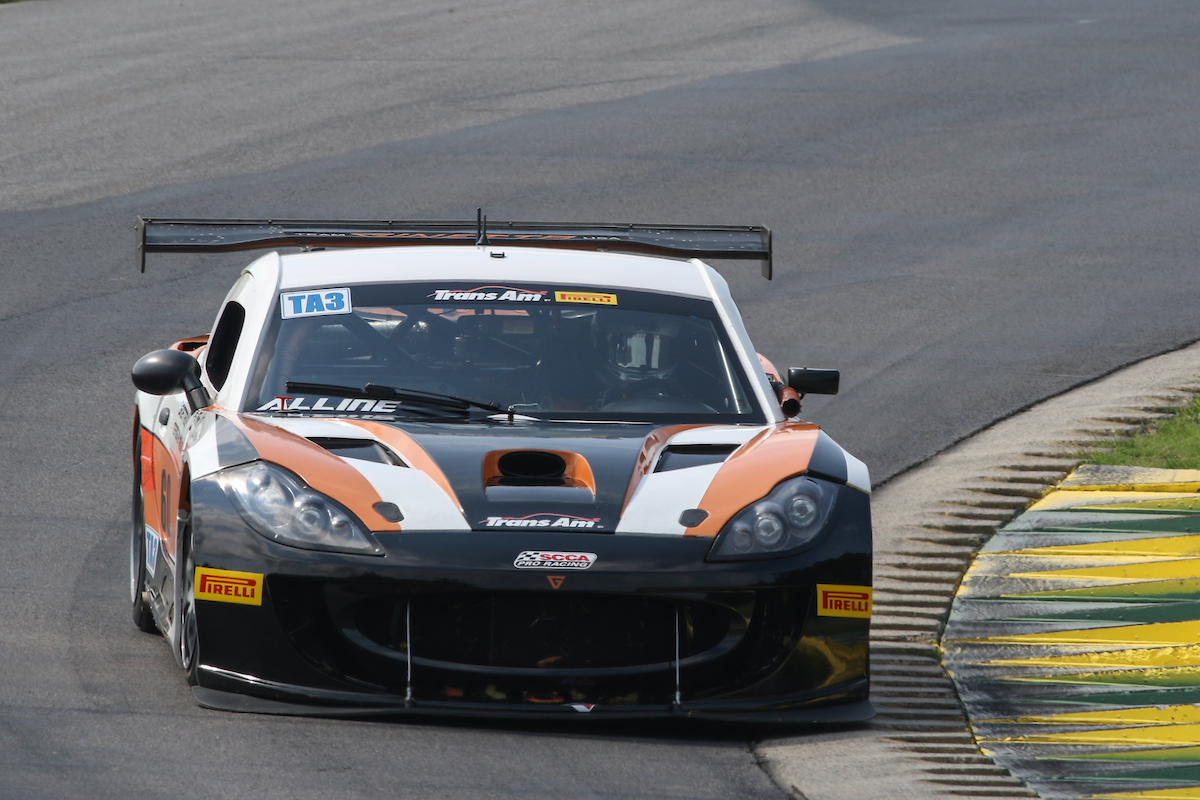 Featuring in Sunday’s multi-class competition alongside will be the 11 competitors making up the TA3 class, with Aline Cipriani, in the No. 60 Ginetta USA Ginetta G55, aiming to retake the class championship points lead, capitalizing on Mark Boden’s absence.

Cipriani enters the weekend needing to secure 15 points to overtake Boden atop the standings but will more likely seekto press her advantage before a final showdown between the two next weekend in Daytona.

Also competing with championship points in mind are Tom Herb, in the No. 16 Fall-Line Motorsports Porsche 991 GT3 Cup, and Dave Ricci, in the No. 71 Florida Roadway Signs Chevrolet Camaro, both vying for third on the TA3 year-end podium with four points, in Herb’s advantage, separating the duo.

With any luck those in attendance will be treated to a repeat of Road America’s TA3 action with Jason Daskalos, in the No. 27 Daskalos Racing Dodge Viper, and Cindi Lux, in the No. 45 Lux Performance Group Dodge Viper, both back in action.  Road America saw a race-long battle between the two V10 powered Vipers, with Lux relentlessly hounding Daskalos from green to checkered in one of the best TA3 battles of the year.  Now the two TA3 race winners will be tasked with replicating the feat on the twisting confines of COTA, a stark contrast to the Road America expanse.

Also featuring under the Lux Performance tent will be Dirk Leuenberger, in the No. 35 Lux Performance Dodge Viper, closing out a career year in Trans Am competition that has seen him capture two podiums in three appearances, including a career-best second at Watkins Glen International. 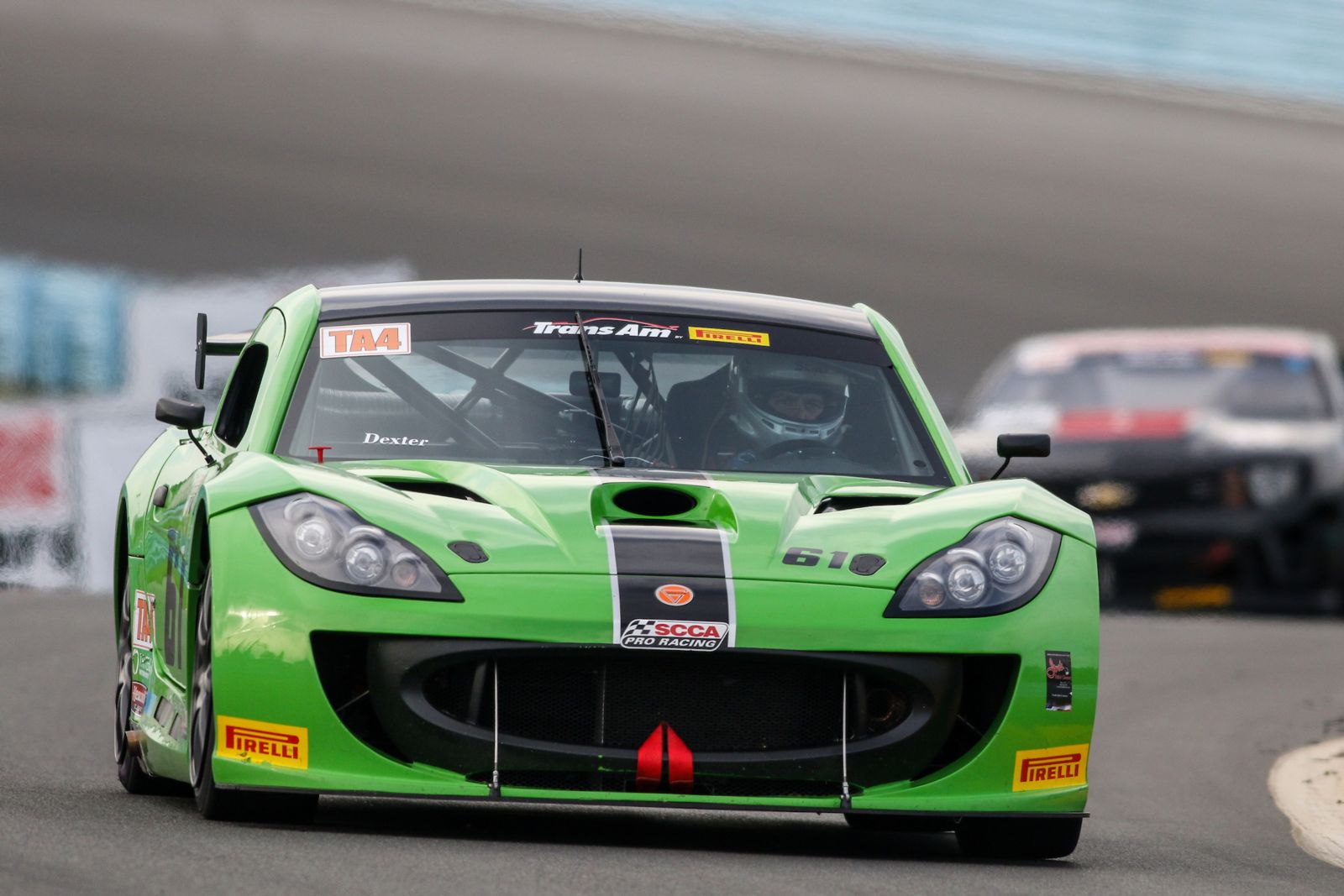 In the TA4 class, champion Warren Dexter, in the No. 61 Joe’s Hand Cleaner/ Dexter Racing Ginetta G55, will be facing last year’s class victor Shane Lewis, in the No. 72 74 Ranch Resort Chevrolet Camaro, with the Robinson Racing Team electing to bring to COTA one of its GT4.Rs Chevrolets, typically fielded in PWC’s GTS class.

Making his Trans Am debut in TA3 will be Warren’s younger brother Ryan Dexter, in the No. 62 Joe’s Hand Cleaner/ Dexter Racing Ginetta G55, looking to emulate his brother’s success in the TA3 field.

Trans Am veteran Milton Grant, in the No. 55 Sentry Self Storage/ Fairfield Inn Porsche 991.1 completes the TA3 entry and with a strong result could vault himself into the championship top three, with the No. 55 currently residing in fifth.