ALTON, Va. [September 21, 2018] - The Trans Am Series presented by Pirelli’s weekend at VIRginia International Raceway commenced this morning with the 47-car field taking to the scenic 3.27-mile, 17-turn road course for practice in preparations for Saturday’s VIR Muscle Car Challenge and VIR Trans Am 100.

In Trans Am’s TA2 class Watkins Glen race winner and championship points leader Rafa Matos set the session’s fast lap from behind the wheel of the No. 88 3-Dimensional Services Group Chevrolet Camaro, as the 20-car TA2 field made preparations for the aforementioned VIR Muscle Car Challenge.  The 1:51.097 was set on Matos’ tenth lap of the session, a strong start to a potential title clinching weekend for the No. 88 and Coleman Motorsports team.

Second quick in the session was Tony Buffomante, in the No. 34 Mike Cope Racing Ford Mustang, with a time of 1:51.853.  Entering the weekend on the back of two disappointing results at Road America, the victim of contact from lapped traffic, and Watkins Glen, a wiring harness failure, Buffomante returns to the site of considerable Trans Am success, including a victory during his 2016 TA2 championship-winning season.

Also featuring in the TA2 practice top five was Keith Prociuk, in the No. 9 HP Tuners Chevrolet Camaro, and rookie Ethan Wilson, in the No. 49 Berryman/ Prefix Dodge Challenger, with times of 1:52.429 and 1:52.697, respectively. 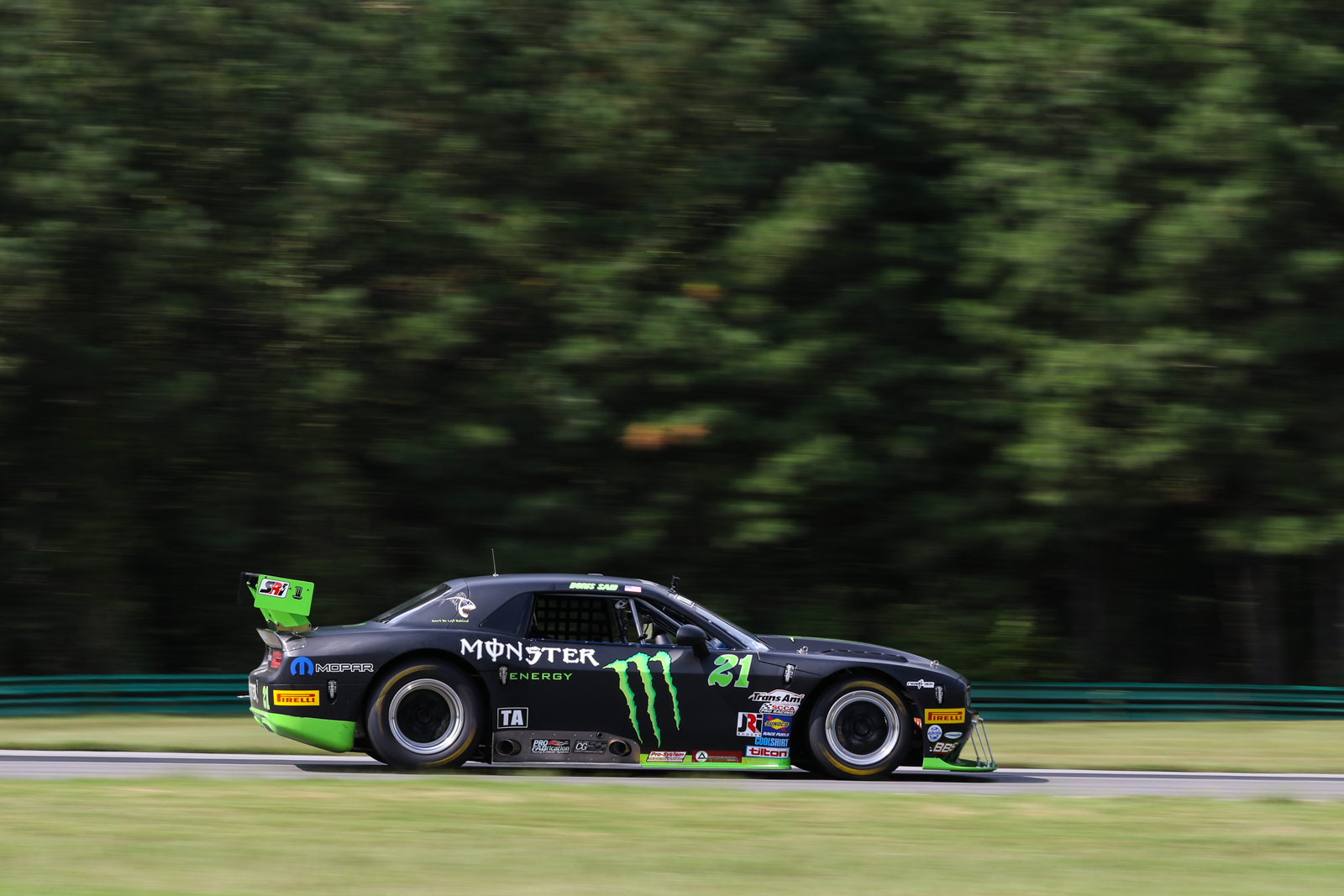 In Trans Am’s TA class, Watkins Glen pole sitter Boris Said, in the No. 21 Monster Energy/ Weaver Concepts Dodge Challenger, was atop the charts once more.  This time the 2002 TA class champ turned a 1:46.381 during the multi-class TA and TA3 practice session.  Despite the traffic on course, Said’s lap was just short of the qualifying track record set by Ernie Francis, Jr., last year, a 1:46.337.

Second quick in the 17-car TA field was Lawrence Loshak, driver of the No. 2 Pennzoil/ ETE/ GoShare Chevrolet Camaro for Burtin Racing, turning a 1:46.474.  Loshak currently resides second in the TA championship points following a midseason surge that  him well within striking distance of points leader Ernie Francis, Jr., with only 28 points separating the two drivers.

Also pursuing year-end honors is Chris Dyson, in the No. 20 Plaid Crafts/ CD Racing Ford Mustang, who turned a 1:47.429 lap for third quick in the TA class.   David Pintaric, in the No. 57 Kryderacing Cadillac CTS-V, set a lap of 1:47.670 for fourth best, while three-time TA VIR victor Paul Fix, in the No. 4 StopFlex/TheCarCoach Ford Mustang, was fifth quick with a time of 1:47.916. 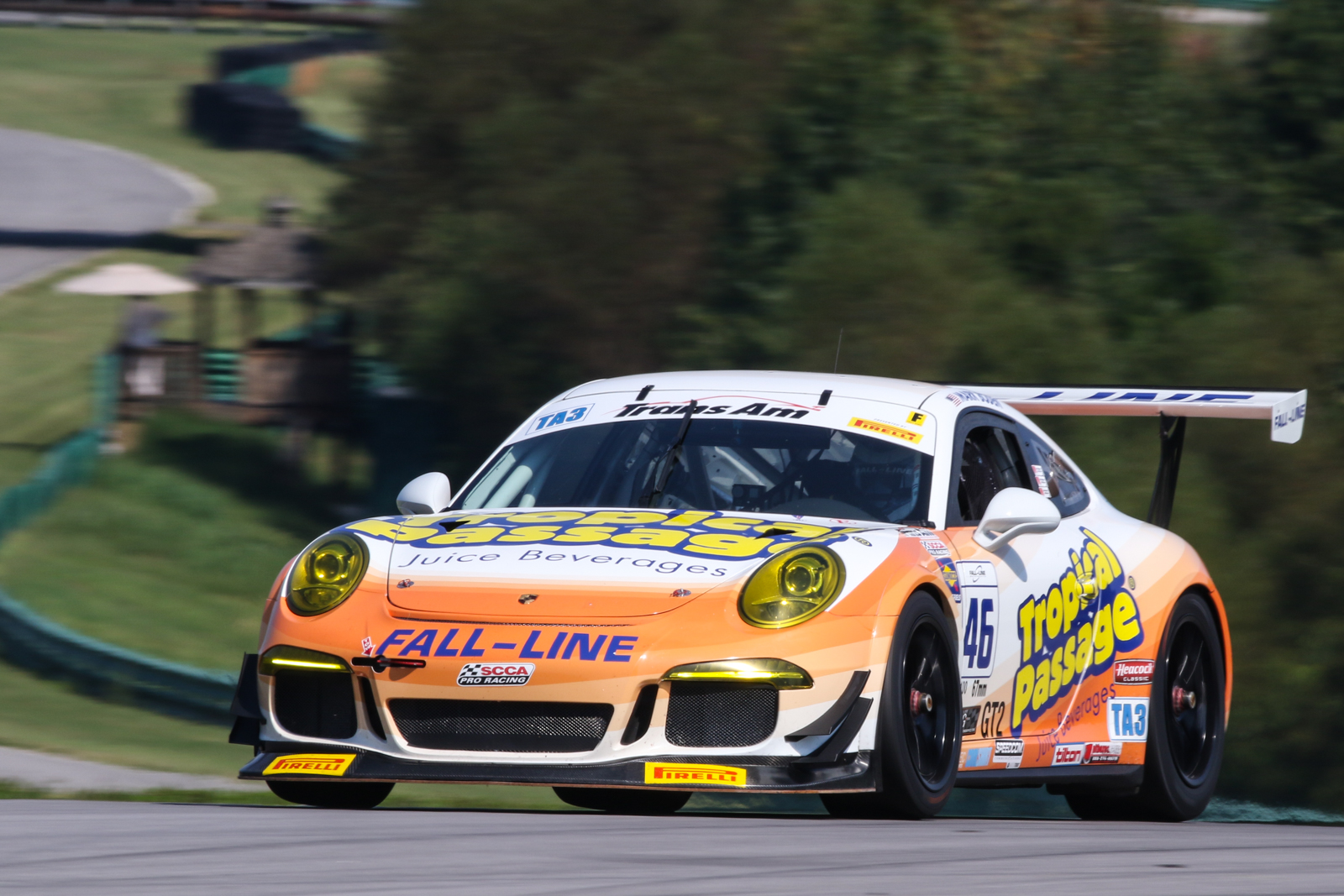 In Trans Am’s TA3 class, Watkins Glen victor Mark Boden started his weekend in the same fashion he ended his previous: atop the TA3 results sheet.  The No. 46 Fall Line Motorsports Porsche 991 GT3 Cup would lead the way for the production racing class with a 1:54.276.  Boden enters the weekend just 13 points shy of championship leader Alline Cipriani; as Boden continues his defense of the 2017 TA3 championship.

Second quick in the TA3 class was the No. 45 Lux Performance Dodge Viper of Cindi Lux, back in action after being sidelined at VIR with engine issues.  The Lux Performance team wasted little time getting up to speed with a 1:54.717 around the VIR circuit where she won last year and set the track record, a 1:53.548.

Trans Am competitors will return to the track this afternoon for qualifying with sessions commencing at 5:40 PM ET in preparations for tomorrow’s races, both of which will span 101.37 miles, 31 laps around the VIR circuit.

Fans can keep up with the Trans Am Series presented by Pirelli throughout the weekend at www.gotransam.com, on Facebook at facebook.com/gotransam and on Twitter at @gotransam.