Ernie Francis, Jr., Drives to the Front for Trans Am Indy Win 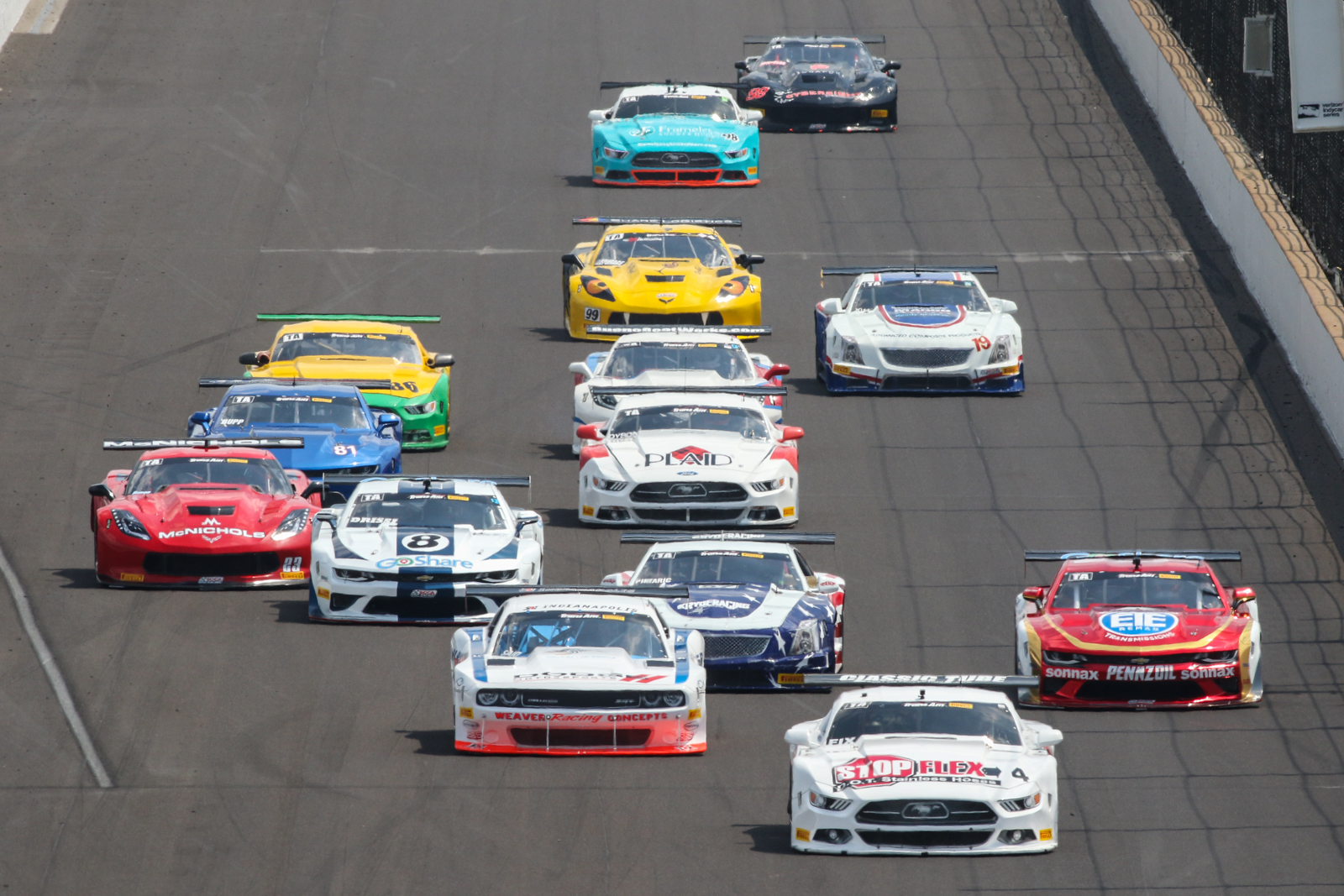 INDIANAPOLIS, Ind. [June 17, 2018] – Ernie Francis, Jr., captured his third win of the 2018 Trans Am Championship presented by Pirelli today in the Berryman Trans American at Indianapolis Motor Speedway, completing a drive from the back of the TA class field to his second consecutive Trans Am win in Indianapolis.

The multi-class 102.06-mile race around the 2.43-mile combined road course saw machinery and drivers alike battle track temperatures in excess of 140 degrees and a slick surface at IMS.

Other than a single hardship lap, the race was Francis’ first time in the No. 98 Frameless Shower Doors Ford Mustang this weekend; as the defending TA class champion took part in his NASCAR K&N East debut, capturing pole and finishing second at New Jersey Motorsports Park.  Francis’ success in New Jersey came at a price, with the No. 98 starting today’s Trans Am competition at the back of the field in 13th position.

The No. 98 would quickly move up through the field, taking advantage of the battles in front of him securing eighth position in advance of the first full caution four laps in, and third by the second on lap 16.   Shortly after the second restart then race leader Lawrence Loshak was forced to pull the No. 2 Pennzoil/ ETE/ GoShare Chevrolet Camaro off with differential issues, yielding the lead to David Pintaric, in the No. 57 Kryderacing Cadillac CTS-V, who would led for a single lap before being overtaken by Francis.

Francis would lead the caution-free remainder of the race, eventually building up a 34 second lead with four laps remaining before coasting to his second Trans Am win at IMS in as many years.

“First of all, I just want to say Happy Father’s Day to all the racing dads our there; I wouldn’t be doing this without my dad,” said Francis.  “Today I was driven mostly by my will to want to go to sleep; I got up at 3:00 AM in New Jersey to fly over here for this race.  The race went how we thought it would; we just ran consistent laps and picked off the field one-by-one, trying to keep it as clean as possible and get to the front.  It was hot out there; and while behind cars on the draft in the front straight, we had to peak out from time to time to cool back down. Temperatures were spiking up and brakes weren’t liking it too much; getting out in front helped a lot and let us get up to speed.”

Francis was joined on the TA class podium by Amy Ruman, in the No. 23 McNichols Company Chevrolet Corvette, who elected to pit under the second caution to adjust setup and in doing so fell back to 11th place.  Ruman would then work her way through the field, capturing third place with five laps remaining and second position on the second-to-last.

“We weren’t in the groove in the beginning,” said Ruman.  “Our setup was terrible and we decided to pit under caution and make adjustments.  It was the right move, we dropped our time by three or so seconds.  We drove from last to second; and I couldn’t be happier with this McNichols 23, hats off to the crew and my dad.  A second at Indy is pretty cool, a first would have been better, but on a day like today I’ll take it.”

Tomy Drissi, in the No. 8 GoShare Chevrolet Camaro, would complete the podium with a third place finish and also secure the top TA class finish in the Trans Am West Coast Championship.   Drissi was served with a drive through penalty while running second with nine laps remaining, falling back to fifth.  A last lap pass of Simon Gregg, in the No. 59 Derhaag Motorsports Chevrolet Corvette, would secure Drissi a podium finish. 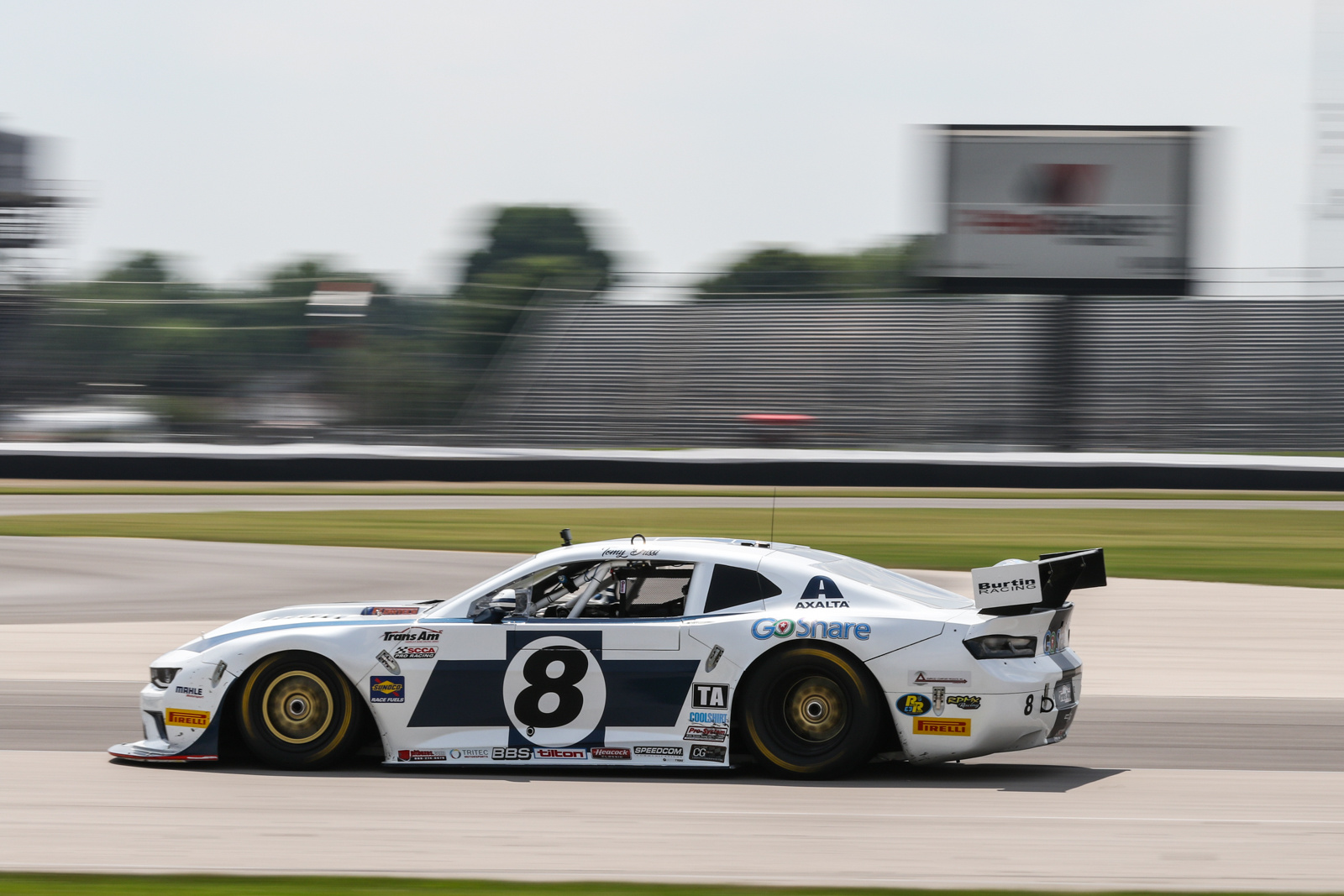 “The real competitor we felt this weekend was mother nature,” said Drissi.  “I’m pretty good in the heat, and I feel like it affected the cars and the drivers.  We had contact with David (Pintaric), which wasn’t intentional— David’s a good guy and I’ll race with him any day.  I got black flagged and came in, then got to work in fifth position, got by two and caught the third place finish.  Amy and Ernie are great drivers, a P1 in the West Coast and a P3 in Trans Am— I’ll take it. Thank you so much to Burtin Racing. They work so hard and are true professionals.” 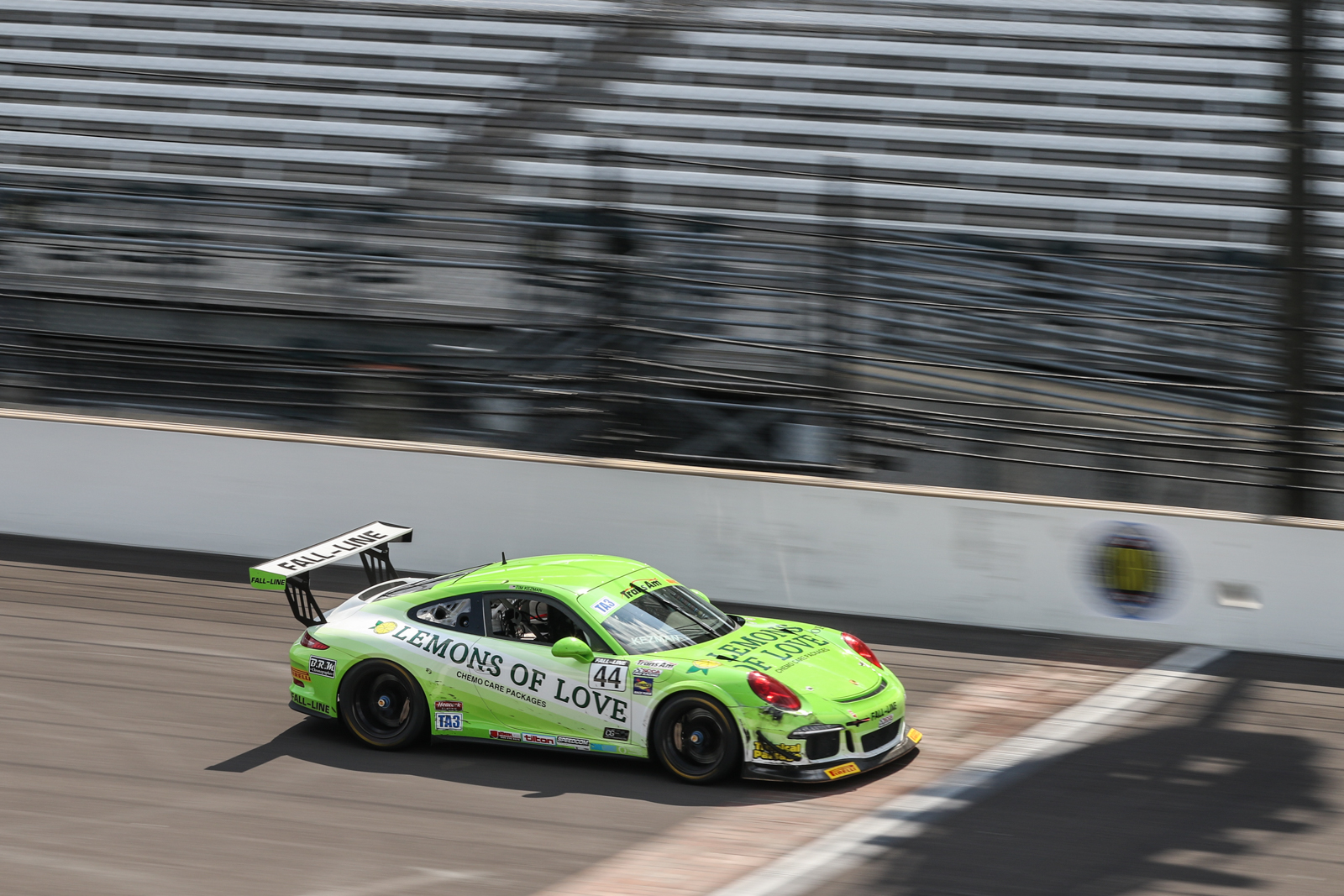 Tim Kezman’s TA3 class win in the No. 44 Fall-Line Motorsports Porsche 991 GT3 Cup finally brought him the Indianapolis lead that a flat tire denied him in 2017 with five laps remaining.  In addition to the track conditions, Kezman weathered a back and forth battle throughout the early stages of the race, taking the lead from Cindi Lux, in the No. 45 Lux Performance Group Dodge Viper, on the 9th who had overtaken polesitter Mark Boden, in the No. 46 Fall-Line Motorsports Porsche 991 GT3 Cup, on the first restart.

From the ninth lap on, Kezman would retain the lead, eventually capturing his first TA3 class win of the 2018 season and seventh of his career while finishing fourth overall.

“A win at Indy is big.” Said Kezman. “Any race fan, anyone who follows the sport, they know Indy is big.  We felt like this place owed us one after last year; we had a big lead last year and had a flat tire with five laps to go.  We came back to finish well, but this one is satisfying and we had to work for it.  The Fall-Line crew once again came up with the best stuff; and in these track conditions, it was definitely the car to have.”

Mark Boden, who took second position in class on lap 13, would finish second in TA3 and fifth overall, giving the Fall-Line Motorsports team a 1-2 sweep of the podium while extending his own podium streak to his past seven TA3 races.

Cindi Lux would finish third in her 2018 Trans Am debut for her eighth career Trans Am podium finish in the No. 45; while Alline Cipriani, in the No. 60 Ginetta Cars Ginetta G55, and Carey Grant, in the No. 5 Sentry Self Storage/ Fairfield Inn Porsche 991.1, completed the class top five. 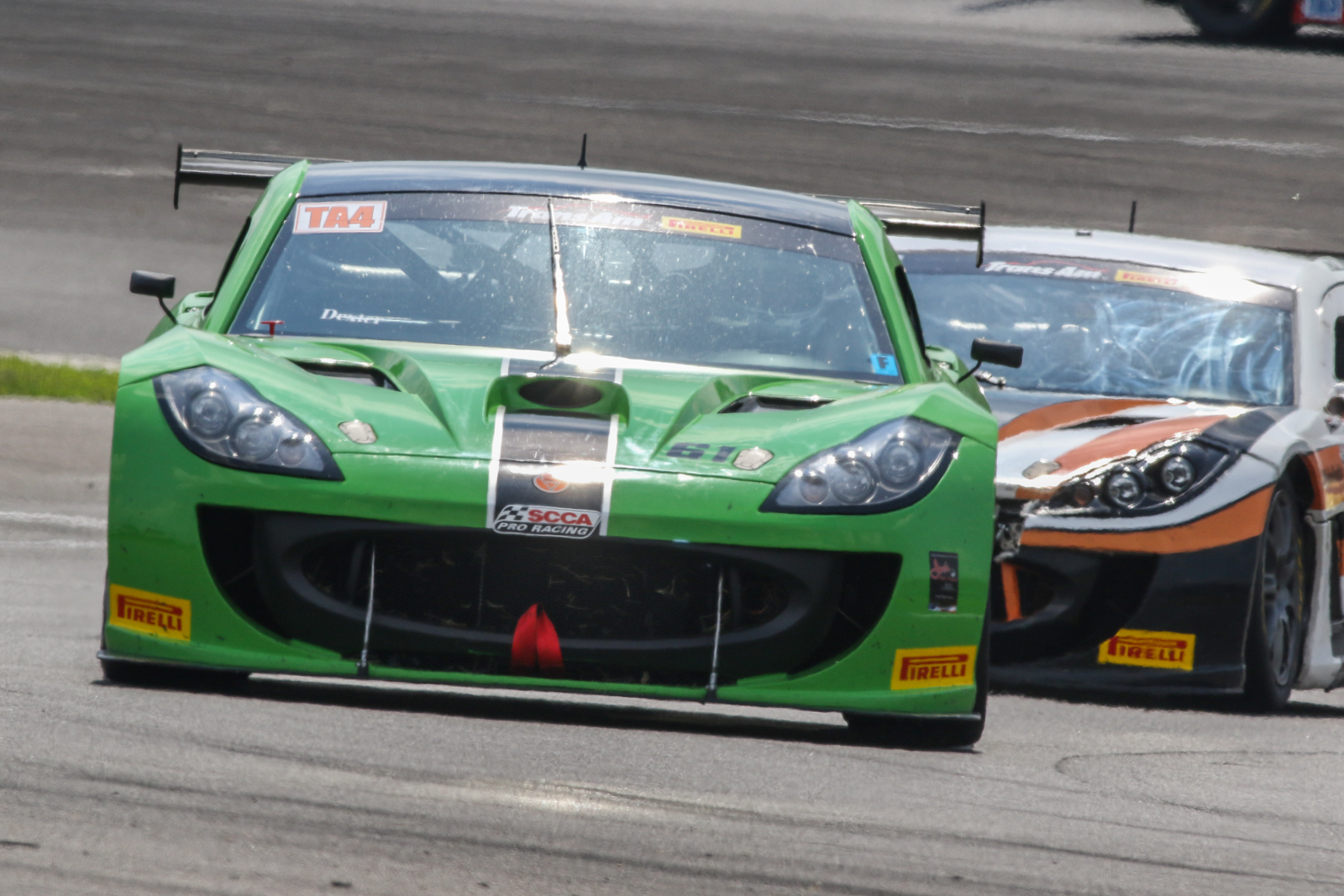 In TA4, Warren Dexter, in the No. 61 Joe’s Hand Cleaner Ginetta G55, completed a dominate weekend that saw him lead every session, start from pole, lead every lap and capture the class win in his Trans Am debut.

“The facility here is really great,” said Dexter.  “We came here without a clue as to what the car would be like, and ended up with a solid car that was really perfect all weekend.  We were on top of it and ran a mistake-free weekend.  With the heat, I just had to focus, keep hitting my markers,  and take care of my brakes; it went smooth.”

Todd Napieralski, in the No. 39 Chevrolet Performance/ SKF/ BSP Chevrolet Camaro, would finish second in TA3 in his season debut; his 33rd Trans Am podium finish.

Both Trans Am races this weekend will be showcased in a CBS Sports Network broadcast on July 1 at 2:00 PM ET.  Replays of both race’s live streams can be also viewed on Motor Trend On Demand.

The Trans Am Series presented by Pirelli and the TA, TA3 and TA4 classes will resume competition August 2-3 at Pittsburgh International Race Complex.