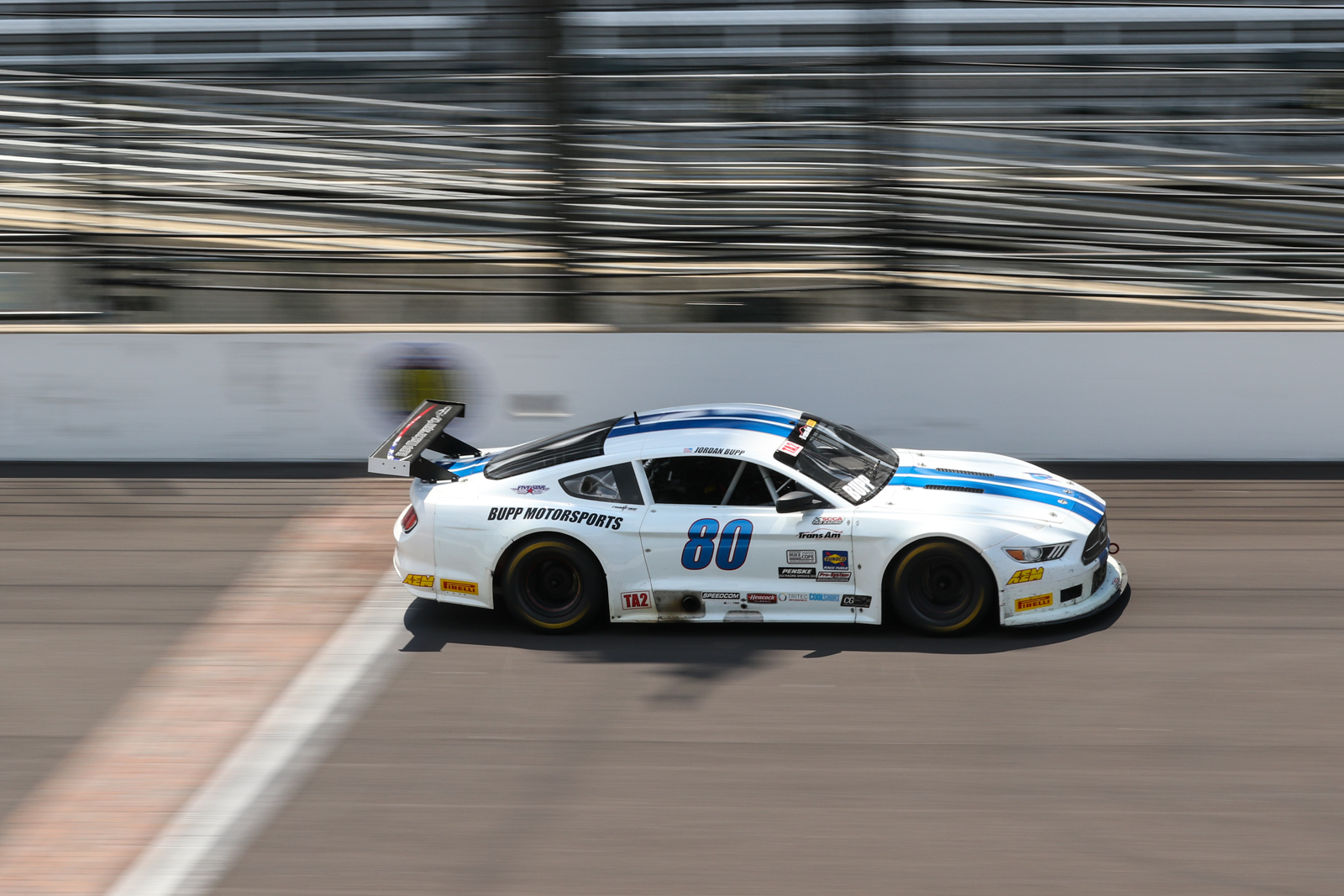 INDIANAPOLIS, Ind. [June 16, 2018] – Jordan Bupp and Thomas Merrill secured TA2 wins at Indianapolis Motor Speedway as representatives from the Trans Am Series presented by Pirelli and the Trans Am West Coast Championship, with both competitions coming together for the TA2 class exclusive Berryman Muscle Car Challenge.

In the hectic final moments of the 42-lap, 102.06-mile competition, Thomas Merrill, in the No. 81 Big Diehl Racing Ford Mustang, emerged first overall and with the TA2 West Coast Victory, while Jordan Bupp, in the No. 81 Bupp Motorsports Ford Mustang, secured honors atop TA2’s primary championship for his first career win.

“I can’t believe it,” said Merrill.  “Coming to Indianapolis is a special thing, the only thing better is coming with your friends.  For me that’s Big Diehl Racing; Richard Diehl, Tim, Chris, Brian; our crew, they built me a hell of a car.  The Mike Cope chassis combined with a Lee Schwartz engine, it’s a great package.  It certainly wasn’t easy, and those last few laps weren’t easy— but we did it.”

“It feels amazing to bring home this result,” said Bupp.  “It’s incredible to do so at Indianapolis Motor Speedway; I had a great run today and was able to save the car for the end.  All these TA2 races, all that maters is being there at the end.  I was fortunate enough to take advantage and I couldn’t be happier.  Thank you to my crew, my family, Trans Am and Pirelli; it’s just awesome.”

Merrill was joined on the TA2 West Coast podium by teammate Richard Diehl, in the No. 18 Big Diehl Racing Ford Mustang, and David Smith, in the No. 5 Shockwave Suspension Seating Chevrolet Camaro, finishing second and third, respectively.  For both Diehl and Smith the podium finishes represent career firsts.

Finishing second to Bupp in the primary TA2 championship was Scott Lagasse, Jr., in the No. 95 SLR/ Fields Racing Chevrolet Camaro, securing the first podium finish of his Trans Am career in his 10th start.  Tony Buffomante, in the No. 34 Mike Cope Ford Mustang, ended the day third for his fourth podium of the season.

The race began with points leader Rafa Matos on pole in the No. 88 3-Dimensional Services Chevrolet Camaro, with Scott Lagasse, in the No. 95 SLR/ Fields Racing Chevrolet Camaro, alongside.  Lagasse would overtake Matos on the start before the entry of turn one, with Merrill overtaking Matos as well, moving into third.
Matos would regain his position atop the charts on lap five, overtaking Lagasse on the fifth lap eventually building a lead that nearly spanned 20 full seconds by the 30th lap when the field underwent the race’s only full-course caution, reeling the No. 88 back in to the rest of the field.

On the 35th lap restart, officials ruled that Matos accelerated before the green flag was shown and was issued a drive through penalty, with Scott Lagasse inheriting the lead.

The final laps saw Lagasse, Merrill and Buffomante, running nose-to-tail, with Buffomante overtaking Merrill and settling into pursuit of Lagasse on the final lap.   Contact on that lap between the No. 34 of Buffomante and the No. 95 of Lagasse saw the No. 95 spin, and while Buffomante passed the checkered flag in first position officials assessed him a 10 second penalty for avoidable contact.

Bupp, who had driven up from 14th starting position, and Merrill were the beneficiaries of the ruling, securing their respective first place finishes.   Rafa Matos, having since made up ground following his own penalty overtook Lagasse as well before he finally righted the No. 95 and crossed the finish line.

Following technical inspection the No. 88 of Matos was excluded from results for non-compliance, Trans Am Rule Book Article 14.1.1 and Addendum A.2.1 – Restrictor, while the Coleman Motorsports team was fined $10,000, of which $7,500 was suspended.

The penalty to Buffomante would move the No. 34 behind Lagasse, creating the provisional top three finishing order of Bupp, Lagasse and Buffomante. 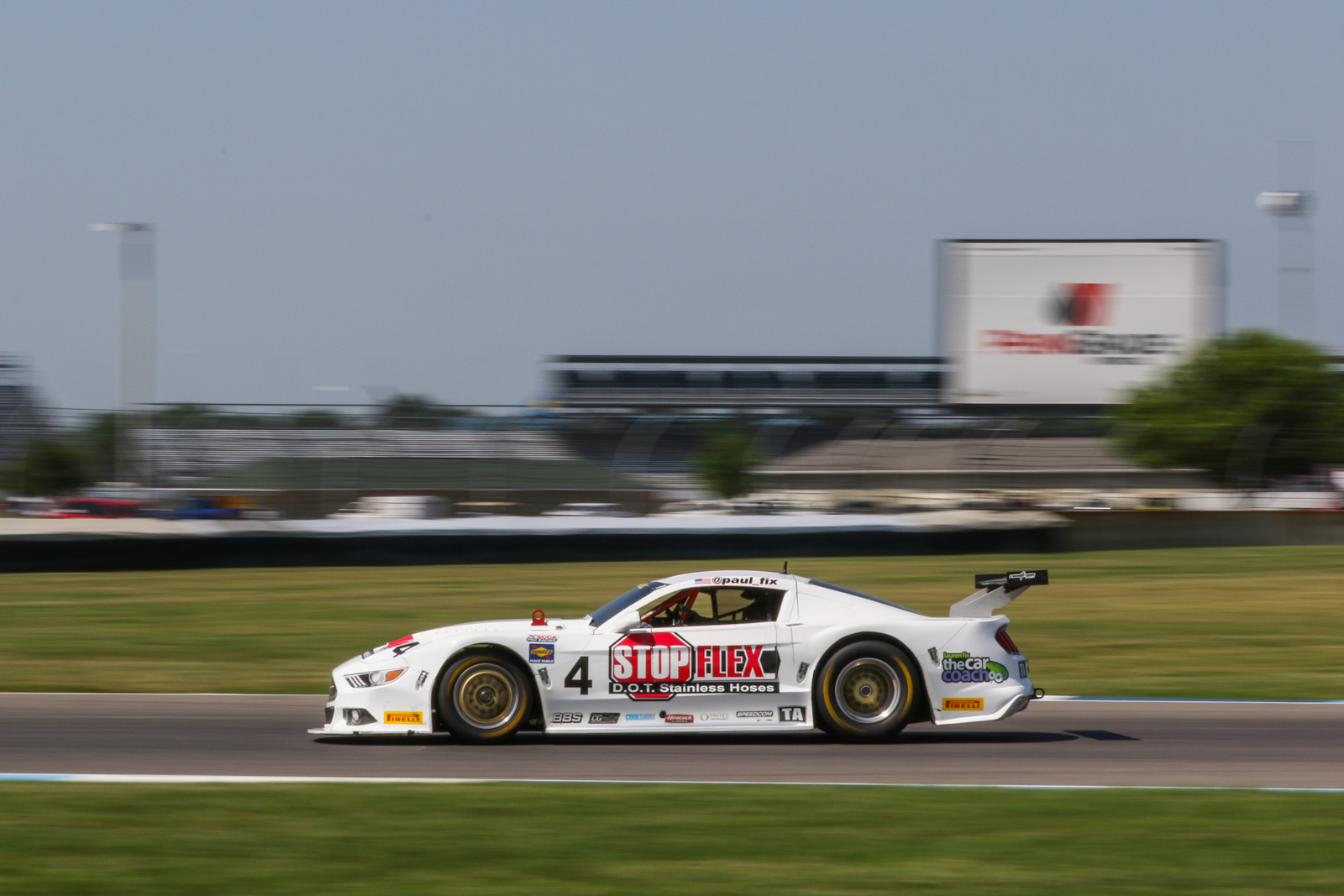 Immediately following the TA2 race, Trans Am’s TA, TA3 and TA4 classes took to the track for qualifying sessions in preparation for tomorrow’s Berryman Trans American, a 42-lap, 102.06-mile race to be held at 3:15 PM ET.

Paul Fix, in the No. 4 StopFlex/ Classic Tube Ford Mustang, would top the charts for the TA class with a 1:26.889 lap to secure his 14th career pole in his first Trans Am appearance since the season’s opening round at Sebring International Raceway where Fix also captured pole but later saw mechanical issues bring his day to an early close.

Now, Fix returns with that same pace in-hand, ready to add to a Trans Am resume that includes 11 wins, 21 podium finishes and 14 poles across 66 starts.

“Indy is a real special place,” said Fix.  “The Brickyard is one of those you want to tick off the bucket list, and we’re well on our way.  Tony Ave has provided a fantastic car for me; and if we can carry this momentum, hopefully we can see a win tomorrow.   It’s going to be another hot day, and we’re going to have to play it as it comes.  We want to lead and command the race and that means adapting and adjusting strategy as we go.”

Starting alongside Fix will be Trans Am veteran David Pintaric, in the No. 57 Kryderacing Cadillac CTS-V, who turned a 1:26.950 lap of his own.  Pintaric has a history of success at IMS, securing the SCCA GT-1 National Championship and a second place in Trans Am competition here in 2017.

Making his first Trans Am start since 2005, Boris Said, in the No. 21 SRI Performance/ Weaver Dodge Challenger, will start in third position after a 1:26.992 lap, just edging that of Lawrence Loshak, in the No. 4 Pennzoil/ ETE/ GoShare Chevrolet Camaro, with a 1:27.036 qualifying effort.

Tomy Drissi, in the No. 8 GoShare Chevrolet Camaro, completed the TA class qualifying top five with a 1:26.889 lap.

Notably absent in the session was points leader and defending TA class champion Ernie Francis, Jr., away in NASCAR K&N East Competition at New Jersey Motorsports Park, who will start tomorrow’s race from the back of the 16-car TA class field.

In the TA4 class, debutant Warren Dexter, in the No. 61 Joe’s Hand Cleaner Ginetta G55, dominated the qualifying session with a 1:33.533 lap, over two seconds faster than Dane Jorgenson-Smith who was second quick in class with a 1:36.179 lap from behind the wheel of the No. 28 Bob Smith Motors Ford Mustang.

Trans Am partners on the weekend with the Sportscar Vintage Racing Association, holding their Brickyard Vintage Racing Invitational, bringing the best of motorsport, past and present, to Indianapolis.

Both Trans Am races this weekend will be showcased in a CBS Sports Network broadcast on July 1 at 2:00 PM ET.

Berryman Trans Am at the Brickyard Remaining Event Schedule: