HOMESTEAD, Fla.  [April 15, 2018] – Rafa Matos captured his second consecutive Trans Am Series presented by Pirelli win today in the TA2 Muscle Car Challenge powered by AEM at Homestead-Miami.  Joining Matos on the podium was his teammate, and TA2 class debutant, Jan Heylen, who finished second to give the Coleman Motorsports team and 3-Dimensional Services Group a one-two finish atop the 21-car TA2 field.  The duo were joined in the TA2 class top three by resident Jordan Bupp, who secured a career best TA2 finish of third.

Matos began the race in second position in the No. 88 3-Dimensional Services Group Chevrolet Camaro but passed pole sitter Shane Lewis, in the No. 92 Turnkey Industries/ Surphis Chevrolet Camaro, going into turn one.  On the fourth lap Matos was overtaken for the lead by Kyle Marcelli, who had started third in the No. 96 AARD/ FerPal/ MRBP Chevrolet Camaro.  However, on the 18th lap restart Matos would return the favor, overtaking Marcelli for the lead— one he would hold through an additional restart, eventually gapping the rest of the field by multiple seconds.

Matos’ win followed a victory last round at Road Atlanta, his first career TA2 victory in his seventh start.  Now with the proverbial monkey off his back, a second win came much easier to Matos than the first.

“I think Road Atlanta gave our team great momentum,” said Matos.  “We have a fantastic atmosphere all around, and I have to say, it was all about the energy.  I came into this weekend so confident, so comfortable, so relaxed.  I was quickest in every practice session and then qualified second, and that didn’t bother me at all.  I knew I had a very strong car, and to come out here in front of my friends and family and win one—it’s very rewarding to me and certainly a big boost to the championship.” 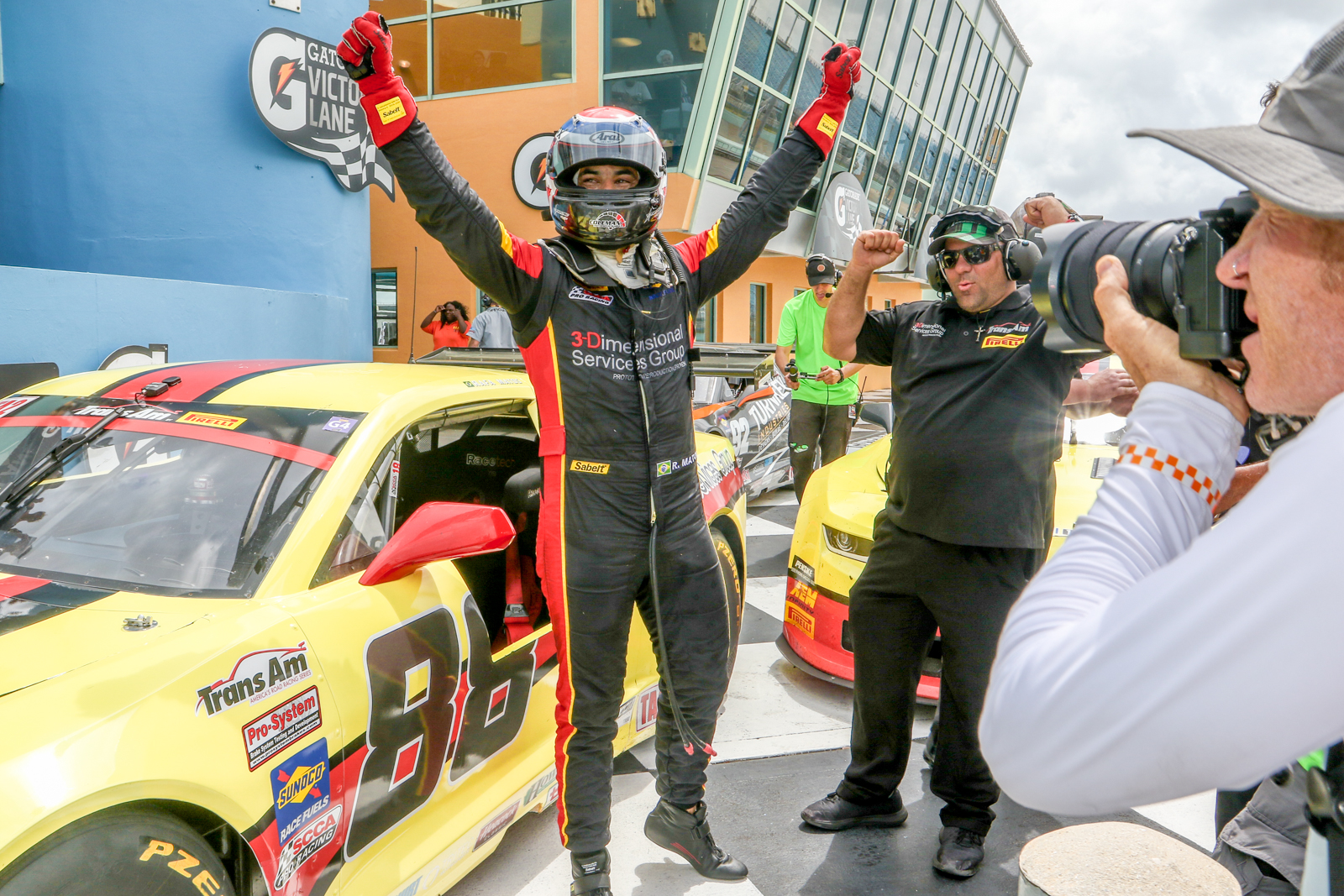 “It’s huge,” said Matos.  “Hats off to the team, hats off to Doug Peterson for trusting Coleman Motorsports to field this team, for trusting my driving, for trusting Jan’s driving.  He’s given us an incredible opportunity; we all really appreciate it. We have a goal, just one, it’s to win the championship.  If we finish first, second, third, that’s just a plus for us.”

Heylen, in the No. 87 3-Dimensional Services Group Chevrolet Camaro, began the race in fifth position, taking fourth on the first lap and moving up to third on the restart and second on lap 23. Heylen would fend of both Marcelli and Shane Lewis for the remainder of the 45-lap competition to bring home the No. 87 in second.

“It was great to be here,” said Heylen.  “I’ve known Doug Peterson for almost ten years now and have done a lot of work with him in the past—it’s really nice of Doug Peterson to invite me to come and race here.  Also, thank you to the guys on the team and Rafa, whom I’ve known since back in the champ car days.  It’s a really pleasant series and made for a great weekend to finish it off with a podium— it would be hard to do much better, I think.”

While the appearance marked his first experience in a TA2 car, Heylen was quick to adapt to the platform despite qualifying difficulties.

“It took a few sessions to get used to,” said Heylen.  “Unfortunately we had a gearbox issue in qualifying, but I was comfortable in the car.  These TA2 cars are a lot of fun to drive and very different from what I’m used to; but I really enjoyed the race—looking after the tires— there’s an interesting strategy behind it which I really enjoyed.”

Shane Lewis finished the race in third position, however, the No. 92 was assessed a penalty by officials for avoidable contact over the final laps on the No. 96 of Marcelli and was moved back to sixth position, behind Marcelli.

The vacated third place finish fell to Jordan Bupp, driver of the No. 80 Donatelife.net/ Bupp Motorsports Ford Mustang, a career best in his 17th career Trans Am start.  Bupp began the race in eleventh position but constantly climbed, taking four positions over the first six laps and fourth on the final lap.

For moving up from 11th starting position to a top three finish Jordan Bupp was awarded the CoolShirt Systems Cool Move of the Race.

All of the top three finishers were Florida residents with Matos hailing from Boca Raton, Heylen Tampa and Bupp Fort Lauderdale.

The race underwent two full-course cautions. The first of which, to retrieve the No. 57 of Maurice Hull stopped off course in turn seven, lasting from lap 11 to lap 18, the second, to retrieve the No. 05 of Steven Lustig stopped off course in turn one, running from lap 36 to 38.  In total the competition spanned 45 laps, 102.15 miles around the 2.27-mile, 10-turn modified road course at Homestead-Miami Speedway.

Previously in the day, the Trans Am Series presented by Pirelli held an identical length multi-class competition at Homestead-Miami Speedway with Ernie Francis, Jr., and Shane Lewis taking class honors.  A full synopsis of that race can be found at gotransam.com