SEBRING, Fla.  [March 3, 2018] – Paul Fix and Rafa Matos secured pole position for tomorrow’s pair of Trans Am Series presented by Pirelli competitions at Sebring International Raceway, the Series’ opening round for the 2018 season.  Joining the two in setting fast laps for their classes were Tim Kezman and Andrew Aquilante in TA3 and TA4.

Fix, in the No. 4 StopFlex.com/CarCoachReports.com Ford Mustang, captured his 14th career pole with a 2:01.644 lap around the iconic 3.74-mile course.  For his efforts Fix will start at the head of the multi-class TA, TA3 and TA4 competition, slated to run for 27 laps (100.98-miles) or 70 minutes, whichever comes first.  Sebring marks a return to the Series for Fix, a veteran of Trans Am who made his debut in 2002, amassing 65 starts, 11 wins and 21 podiums over the course of his career.

“The competition is going to be tough,” said Fix.  “There are a couple of cars that are really fast, but pole position means a lot as well—getting out there in front.  Sebring is such a fast racetrack; so hopefully, before I run into traffic, we’ll be able to do what we need to stay out front.  I’m looking for a great race.”

To stay in front Fix will need to keep at bay a talented TA class top five, led by defending TA class champion Ernie Francis, Jr., in the No. 98 Frameless Shower Doors Ford Mustang.  Francis qualified behind Fix by seven hundredths of a second turning a 2:01.714 to Fix’s 2:01.644.  Francis, a native of Florida, led much of the Sebring race in 2016 before suffering a part failure in the final stages.

TA class newcomer Lawrence Loshak, in the No. 2 Pennzoil/ ETE Reman/ GoShare Chevrolet Camaro, was third quick with a time of 2:02.041—on his second and final lap of the session.  Last year’s Sebring winner Cliff Ebben, in the No. 36 Stumpf Ford/McMahon Group Ford Mustang, and Chris Dyson, in the No. 20 CD Racing Ford Mustang, completed the TA class top five with laps of 2:03.220 and 2:03.807, respectively. 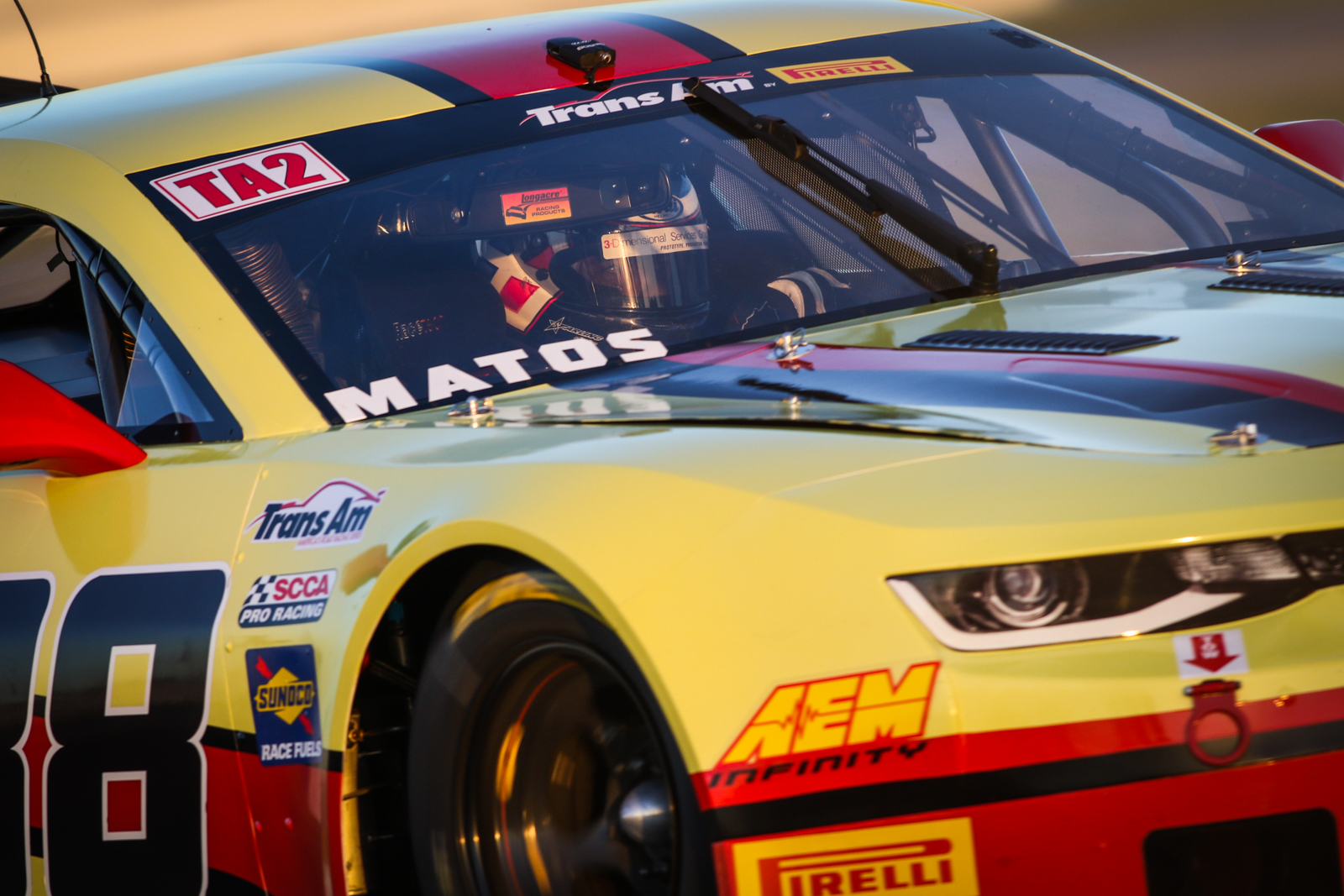 In TA2, making preparations for the single class TA2 Muscle Car Challenge powered by AEM competition, it was Rafa Matos who secured pole from behind the wheel of the No. 88 3-Dimensional Services Group Chevrolet Camaro.  The pole is Matos’ second in six appearances and came his way after a 2:07.875 lap.  While Matos showed plenty of speed in 2017, the No. 88 is yet to reach the top step thanks to a series of mechanical and electrical issues.  But with a new year underway, a self-assured Matos is confident in the retooled No. 88 and ready to take to the track with 30 fellow TA2 competitors tomorrow.

"The team has worked extremely hard building this car,” said Matos.  “And thanks to Howe Enterprises for this machine.  The car has been just flawless all weekend long; I was quickest in every session so I didn’t want to look like a fool in qualifying.  I was really happy to put it all together. The conditions in our session were extremely difficult; it was very hard to see because of the sun. We made some changes right before qualifying, which we were a little unsure of; but the car reacted extremely well.”

For the past four years the TA2 win at Sebring has come from pole position with Dillon Machavern (2017), Gar Robinson (2016), and Cameron Lawrence (2014), 2013) all bringing home victories.  Matos expects a similar result come tomorrow.

“The pole is very important,” said Matos.  “Being up front, there’s less of a chance of any accident; and Sebring is not a very easy track to overtake on.  We’re really good in the infield and we have a good engine, our goal is to stay in front throughout the race.  I’m having a great time. Trans Am—it’s the real deal.  It’s real racing.  I had a bit of experience with stock cars in Brazil; the cars are similar to what we have in TA2 and for me it was a smooth transition. I think this will be a great year.”

One of the drivers tasked with chasing down Matos will be the man who starts alongside him, Marc Miller, driver of the No. 12 Speedlogix/ Prefix Dodge Challenger, who turned a 2:08.339 lap of his own.  The start will mark Miller’s official TA2 debut, following up on an exhibition appearance in 2016 as he joins the Stevens-Miller team full time in 2018. 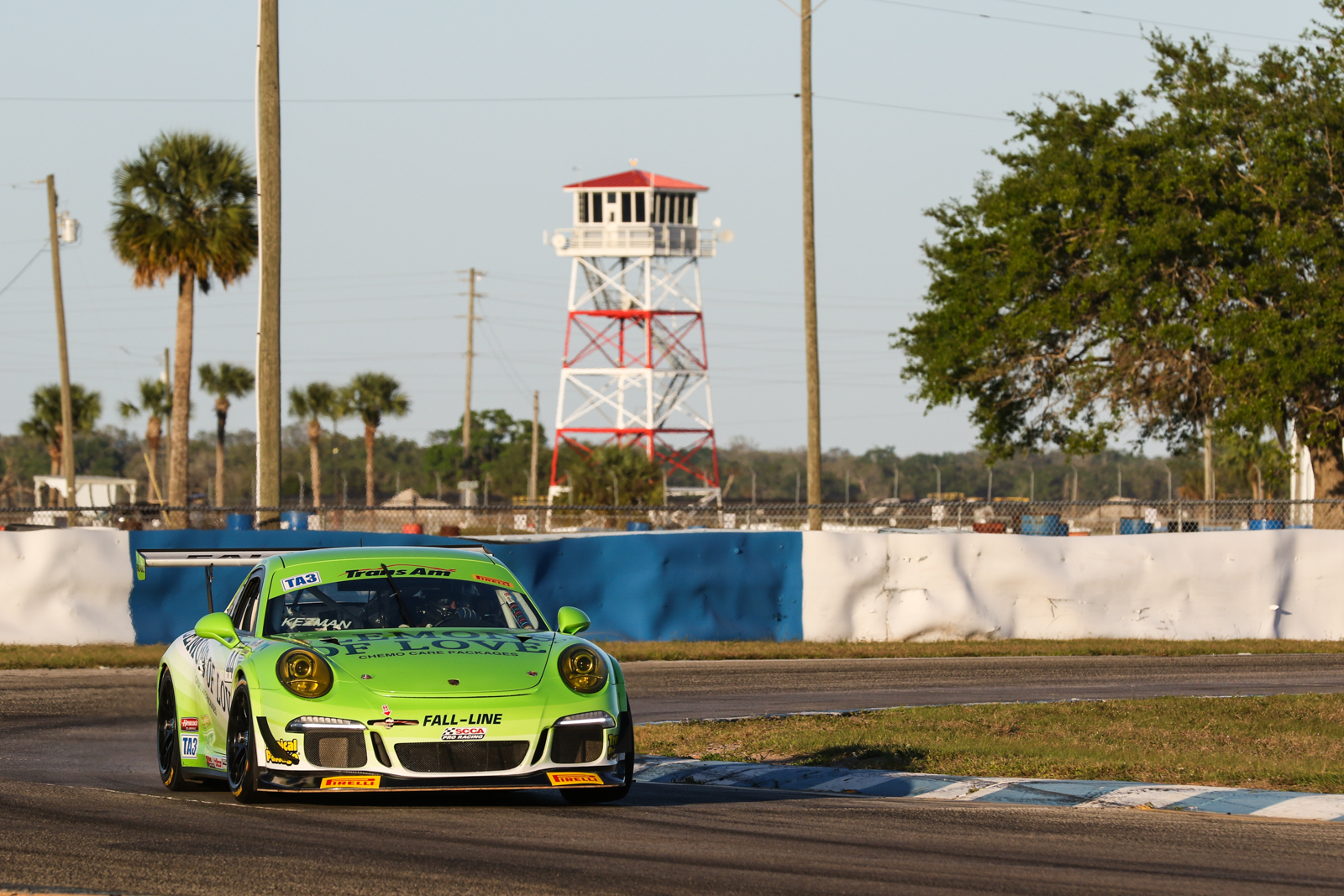 Randy Kinsland, in the No. 11 RF Engines Chevrolet Corvette, was one of the competitors expected to compete with the Porsche contingent but missed the qualifying session outright. 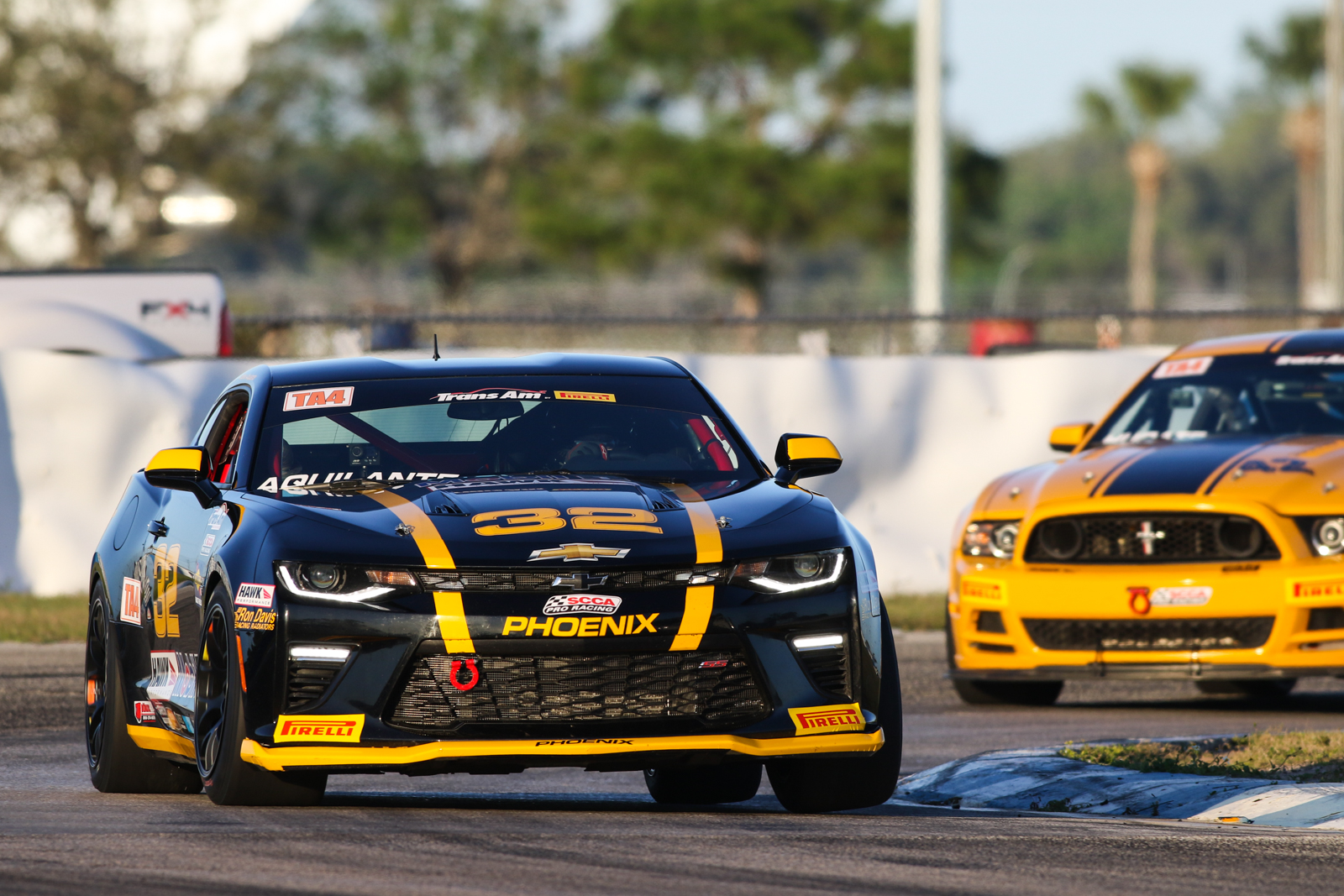 Andrew Aquilante, in the No. 32 Phoenix Performance/Hawk Chevrolet Camaro SS, would set pole behind a new TA3 class qualifying record 2:13.017 lap—breaking the mark of 2:13.968 set by Brian Kleeman in 2017.  Tomorrow will mark Aquilante’s fourth Trans Am start but first TA4 appearance, having previously competed in the TA3 class where he captured two victories.

Defending champ Brian Kleeman, in the No. 07 DWW Motorsports/RaceTech Seats Ford Mustang, will be tasked with hunting down Aquilante tomorrow and will have the benefit of starting alongside after a 2:14.915 mark of his own.  Debutant Ronald Hugate, in the No. 52 Phoenix Performance/ Hawk Ford Mustang, will start on the inside of the second row for TA3 after a 2:16.250 qualifying effort.

Chris Outzen, in the No. 09 DWW Motorsports/ itrackzone Ford Mustang, and Steven Davison, in the No. 22 DAVinci Plastic Surgery Aston Martin Vantage GT3, completed the TA3 field with times of 2:18.909 and 2:21.669.

Tomorrow will see the TA, TA3 and TA4 classes take to Sebring International Raceway at 11:05 AM ET for their multi-class competition, and the TA2 class take the green flag at 3:05 PM ET for the Muscle Car Challenge presented by AEM.    Both races will consist of 101.98 miles (27 laps) or 70 minutes, whichever comes first, and constitute Round 1 of the 2018 Trans Am Championship.